A Last Dish of Fish and a [short?] Pause. 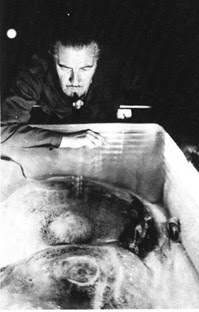 It's been a week, so I've tried to grind out one more sea serpent post before retiring for a while. [My back's been killing me and Wheeling WV is currently an unhelpful sauna --- things conspire to impede "progress" in the pursuit of our "fun" it seems]. This post doesn't have much to do directly with Ivan, but I thought I'd put him up there on top so he could read it, too. 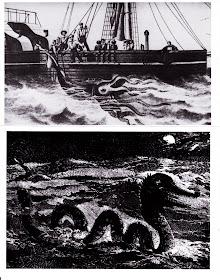 I was going through my own relatively flimsy Sea Monster files, which I brought with me from Michigan when I hauled Ivan's notebooks here, and found something worth mentioning at least. Some time ago, Gary Mangiacopra asked me if I could search my files seeking unpublished reports of various kinds, and by chance there seemed to be one [which I sent him]. The report is in a letter which I'm attaching here to the left of the commentary. I believe that it's a pretty good case. 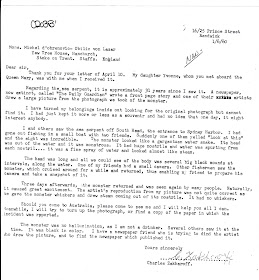 The letter is from the files of my favorite lunatic, George Hunt Williamson. It is fortunate for us that it is not he who is claiming to see the monster, or we'd have to adjust our crap detectors to full power. Instead, this letter is from someone who doesn't even know GHW, and is just responding to a request.
George was sailing on the Queen Mary between the US and England on one of his lecture trips. Being a ladies man, he wasn't being shy with the girls, and got into a conversation with an Aussie lady about, what else?, weird things. She told him that her father had once seen a sea monster.
George of course was immediately GaGa at anything out-of-normal [he believed that all those things from UFOs to Nessie to ABSMs were somehow part of one BIG deal involving spiritual enlightenment, trance mediumship, "elder masters" walking among us and ... well, we haven't the time]. He got the girl to give him her father's address and upon reaching England [I think that he was going by his "Yugoslavian Royalty" name at the time --- Michel d'Obrenovic --- and researching the Holy Grail ... yes ... we really haven't the time], he sent a letter to Australia asking for the story. The letter on the left is Mr. Zakharoff's kind reply.
I find the letter a very good one when it comes to credible witness testimony. It is fairly clear and precise and doesn't claim too much. It is humble and signals other support theoretically available/checkable. The "context" of the sighting is "natural". In short, I believe that we can assume that Mr. Zakharoff is reporting what he believes he saw.
As you can read, he believes that he saw "a gargantuan water snake". It held its head out of the water and blew water spray from its nostrils. Its head was "long", and its body as well, having "several big black mounds at intervals along the water". He felt it was "monstrous", and labeled it a "sea serpent".
GHW never did anything with this case to my awareness, and the letter slept in his files. Gary liked it, however, and published the case in an outlet which I had not seen until today, called North American BioFortean Review, which is on the internet. The discussion there leans towards the giant squid as an explanation. .... ummmm .... I have to admit that Gary and his co-author are far smarter than I am on this stuff, but I can't quite get the squid. Zakharoff says that the thing was a monstrous serpent, and blew water spray out of holes near, well, he's GOT to mean its head. He refers to them as "nostrils".
I'm not going for the Squid on this one [in fact I'm eating squid tonight in honor of that decision]. But I can easily be wrong. 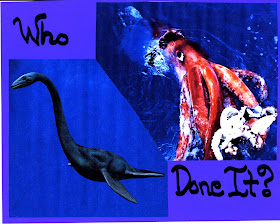 The second tidbit has to do with the Santa Clara "Run-into-a-sea-serpent" case. We have many people out there, apparently, who see this case as an oarfish. 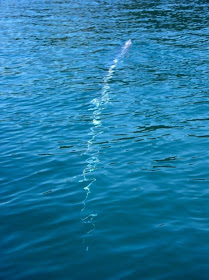 It turns out that Gary and his co-author Dwight Smith also wrote about this [in The Anomalist #7]. Using Ivan Sanderson's 1964 article on his interviewing [which we discussed a few posts ago] and doing personal interviews as well, Gary writes that he does not buy the oarfish idea [which now, on this one, I am in complete agreement].
Mangiacopra and Smith begin their article by giving a powerful "credibility argument" for the witnesses in the case just as we did. The Santa Clara incident is a great relief in that it's bona fides are so good as to the witnesses that that side of the anomalistic conundrum can be set aside as non-problematical.
As to the oarfish: our authors state that the longest oarfish measured was 21'x" long. According to the witnesses, the visible part of the body was 35'. Well, maybe this was the "Mother-of-all-Oarfishes" but it at least casts some real doubt on the hypothesis.
AND...I don't see a real good resemblance between an oarfish in the water and what the witnesses described. "Oarfish" is one hypothesis for this thing, but "animal X" is, to me, a better one. {picture to the left is of an oarfish in the water}. 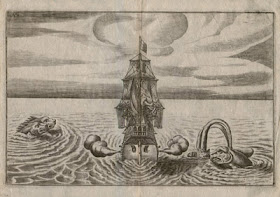 So, we, for the moment sail off into the sunset, guns having blazed away at sea monsters on both starboard and lee, hopefully not making them too angry.
My posting will probably cease for a bit --this @#%&#@ back must relax and stop barking, the heat could cooperate a bit more, but mainly I'll be going back to Michigan soon and that is always a disruptive change. So, God bless and Peace, and happy sailing. 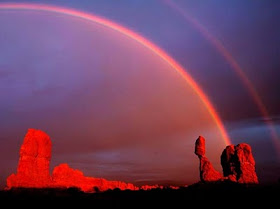