Something I've Not Thought About For A Long Time 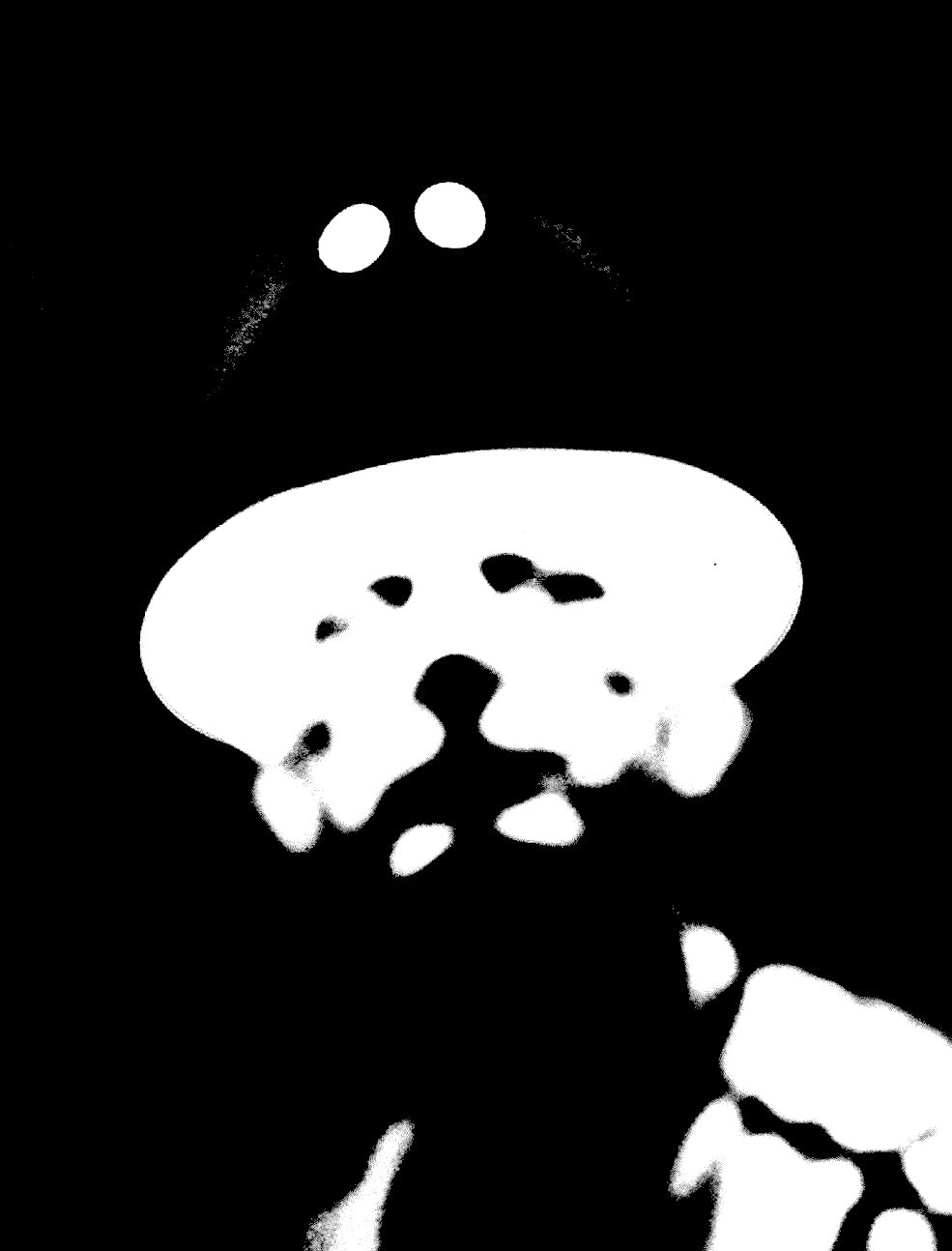 "And now for something completely different".....

I won't tease you. This post is about something that I think has very little chance of being real, at least in the terms which have been applied to it. It's about the alleged "pyramid energy" and its claims to do all manner of unexpected things. But before I "reveal all" as to my "brilliant" insights on this, here's why I'm posting.

Along with my assaults on the extra FATE magazine piles [etc] which must "go" prior to the ultimate move to the new house, another casualty has been the slide collection. This thing once upon a time [when the technology of the age was oriented to such antiquities] was pretty extensive and impressive. Lots of good talks and "prof's lectures" embedded there. But that's all passe, so to the trash it goes.

In the doing so, I looked at every slide to see if any had unique or near unique information on them [surprisingly some did.] [95% were booted, and some saved just because they were "pretty" or dramatic.] Of the unique ones were several pictures of a plant growth "pyramid energy" test. 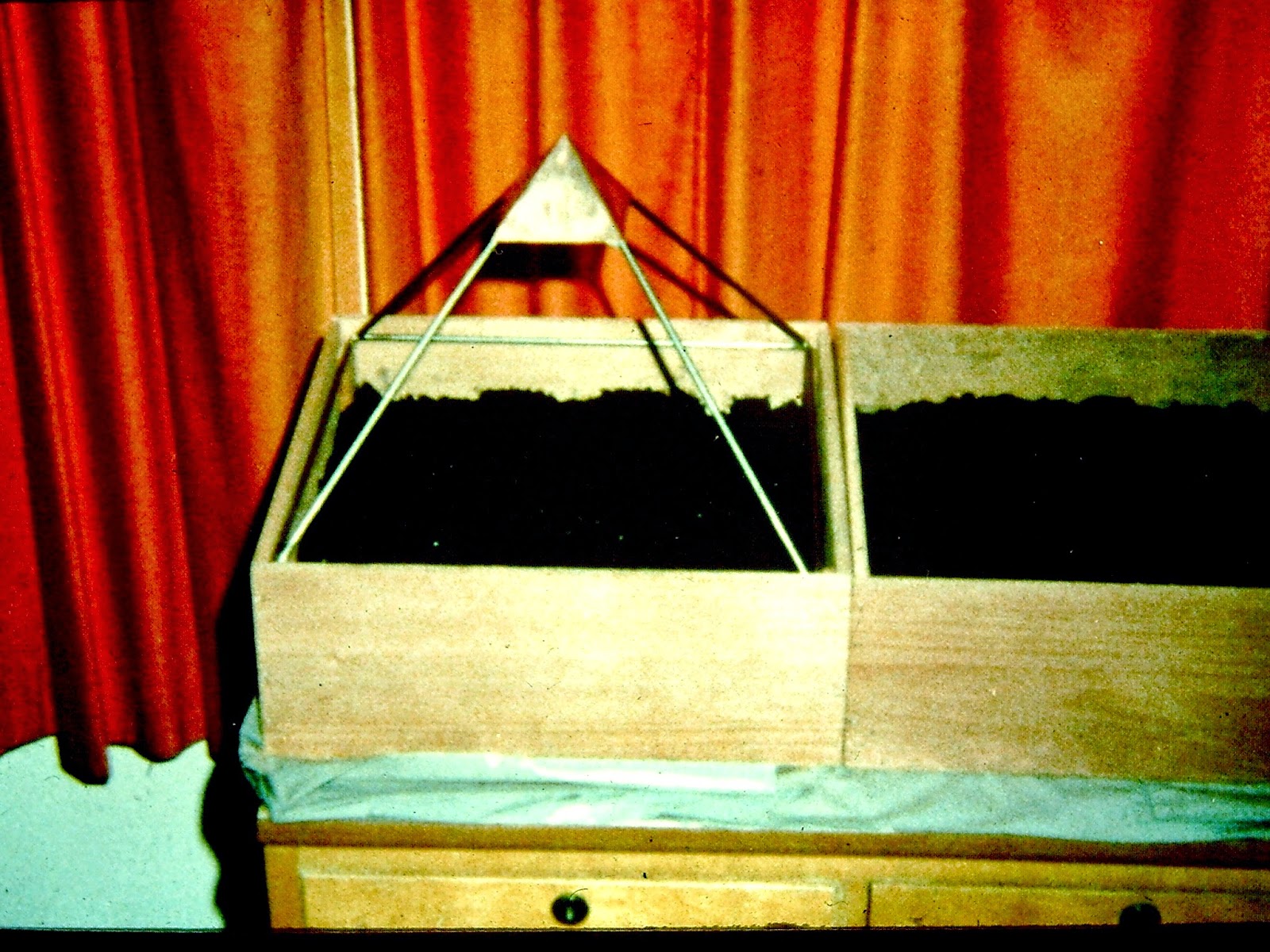 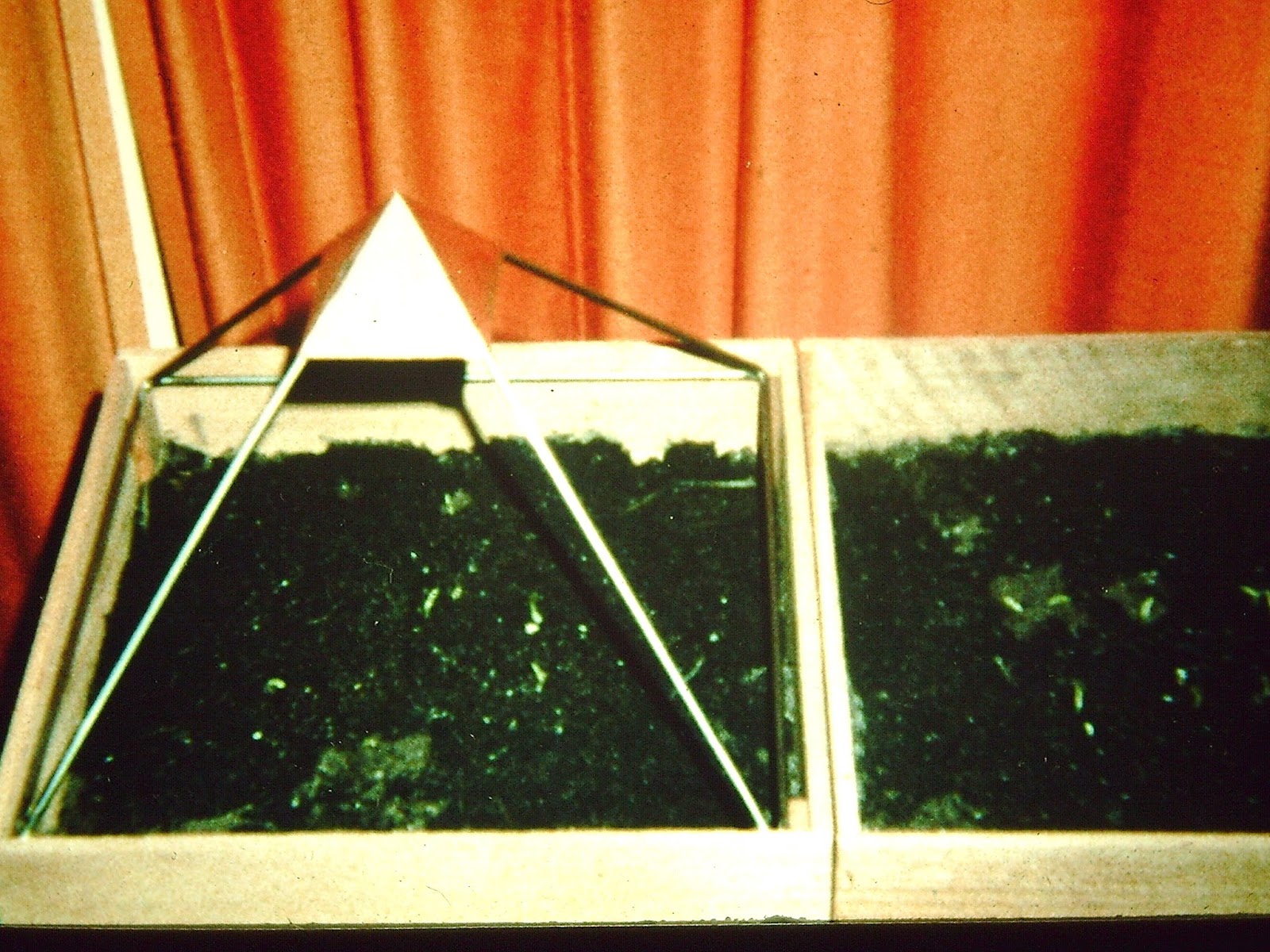 The photography isn't stellar here, folks, but it's good enough to get the gist of this.

Once upon a time, far back in the Ancient 1970s, I was teaching a course called "Science and Parascience" --- a dammed good course regardless of what the chemists and physicists thought about it. The course required a student to demonstrate that they understood the scientific method, could dump their biases, and think about a controversial topic like a scientist. Normally students HATE things like scientific methodology, but because this was heavily chocolate-coated with subjects that many students would nearly kill to get a chance to study, it was wildly popular. AND, wonders of wonders, almost all of the students over the 15 years of the course's existence, behaved and gave it honest tries.

One of my best [I had MANY SUPER students in this class] decided to take on "pyramid power" as her topic. Kathy [I'm not telling you her last name as I'm sure she's leading a happy successful life with no need for "strange" internet followers] was a very bright, and very cute and energetic co-ed who insisted that I allow her to do some project which was more than a literature survey --- in other words she wanted something to experiment upon and gain her own data. ... Prof's Dream.

I had purchased two identical planting boxes with a metal [copper] open-work pyramid which fit into the grooves so it was stable above one of them. You see the rig above. Kathy did as I expected --- somewhat obsessively measuring out soil, water, growth medium, and seeds. She was a gem --- sure she wanted to get a "positive" result, but she knew that if she didn't give the experiment an honest base, she'd have wasted her time and learnt nothing. By the way, although you will see the planter boxes always in the same orientation in these pictures, Kathy regularly [on a timed agenda] moved the boxes into one another's position to equate as best she could the different sunlight [if any] or the different heat quantity [if any] relative to the two positions. She took pictures when the boxes were in similar positions just to make the visual comparison easy [ Like I say... a gem.] 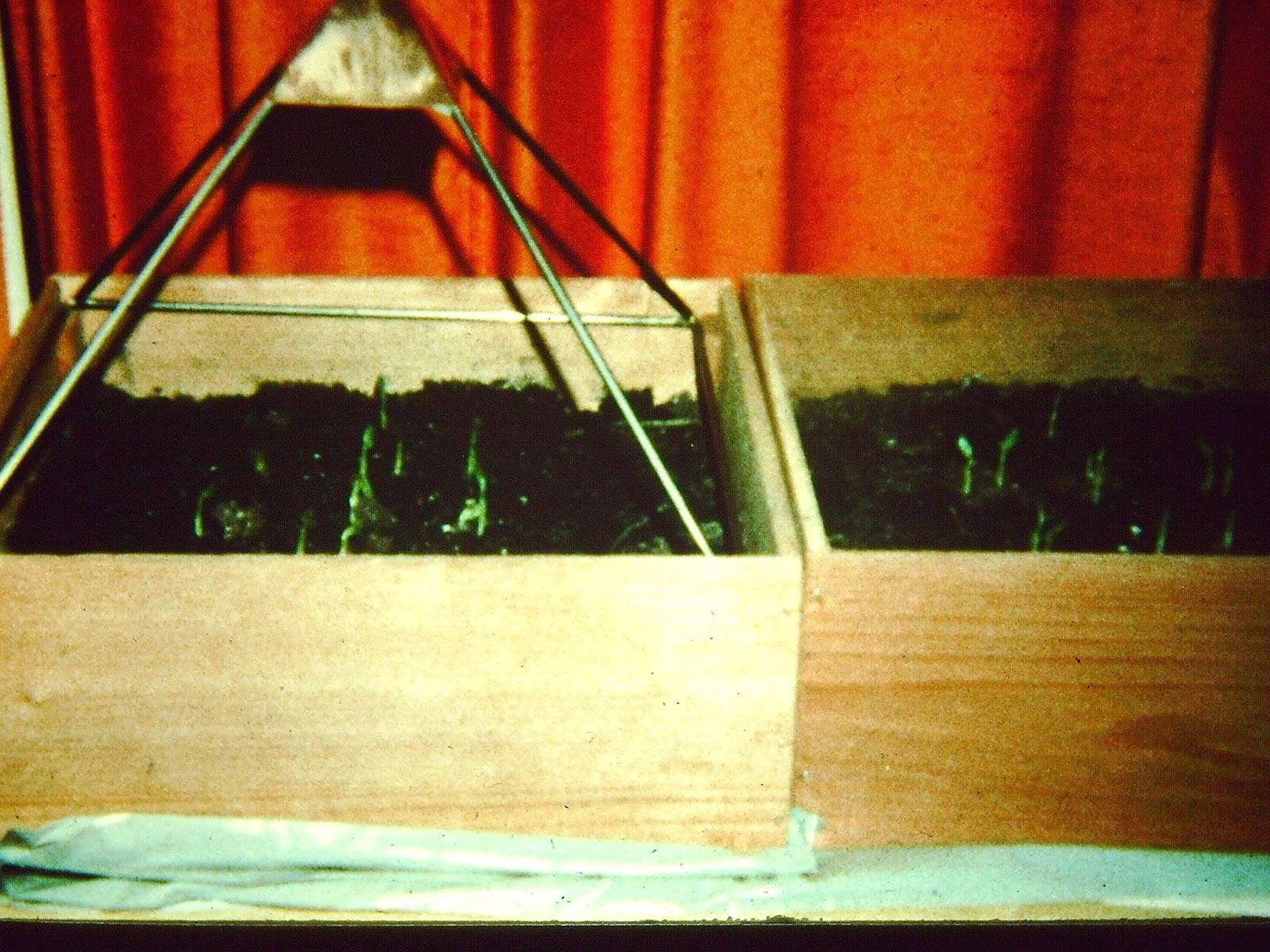 Whereas the first two pictures above were at "day zero"/planting, and day 5/ 1st sprouting [these were bean plants], things began to get lively at day 7. Though you can't see it too well, Kathy noticed, she thought, a small increase in robustness in the pyramid plants already. 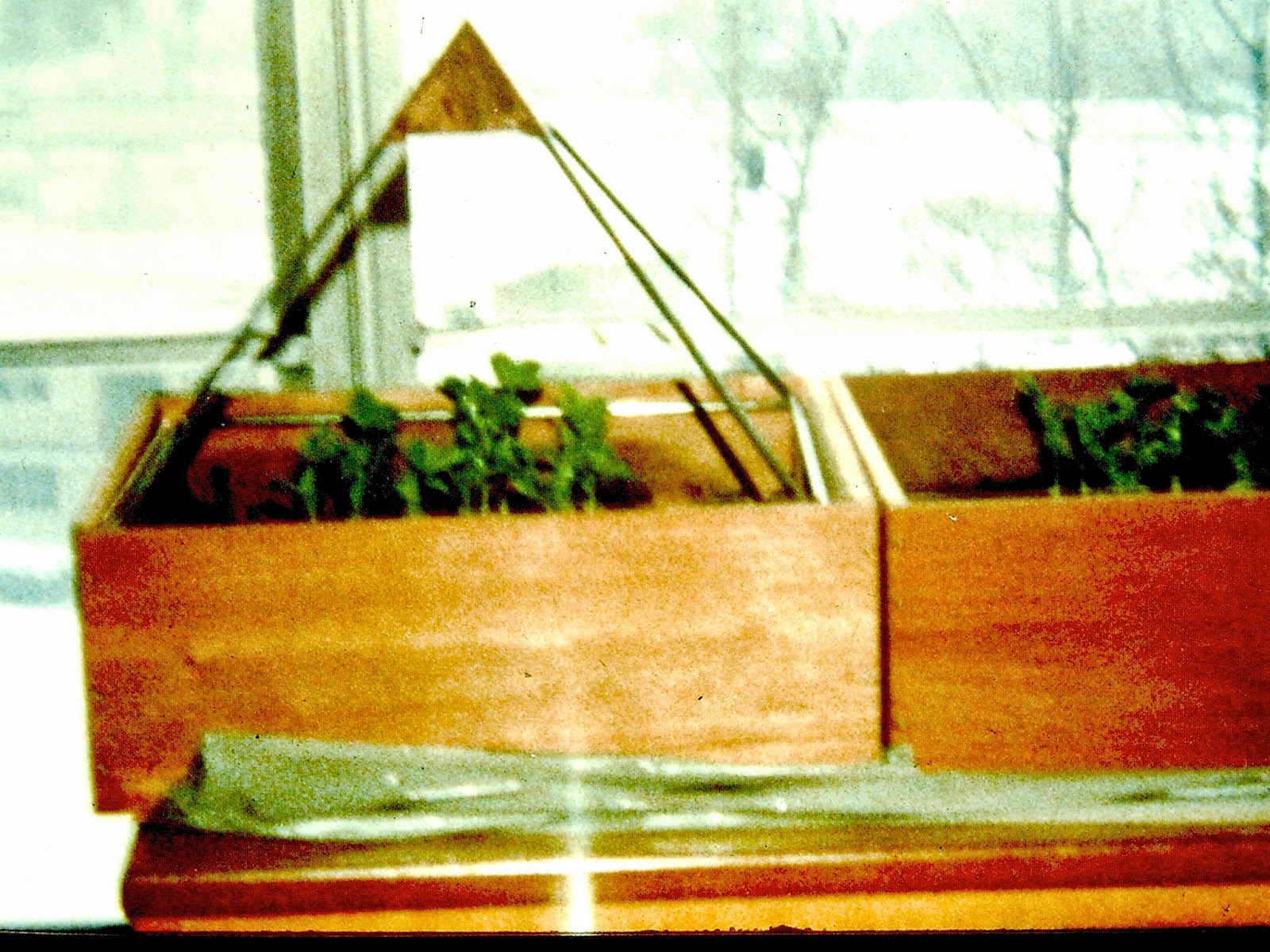 The pictures above are day thirteen. Kathy was pretty sure that somehow the experiment was "working". The plants in the pyramid box --- some of them anyway --- were noticeably taller. 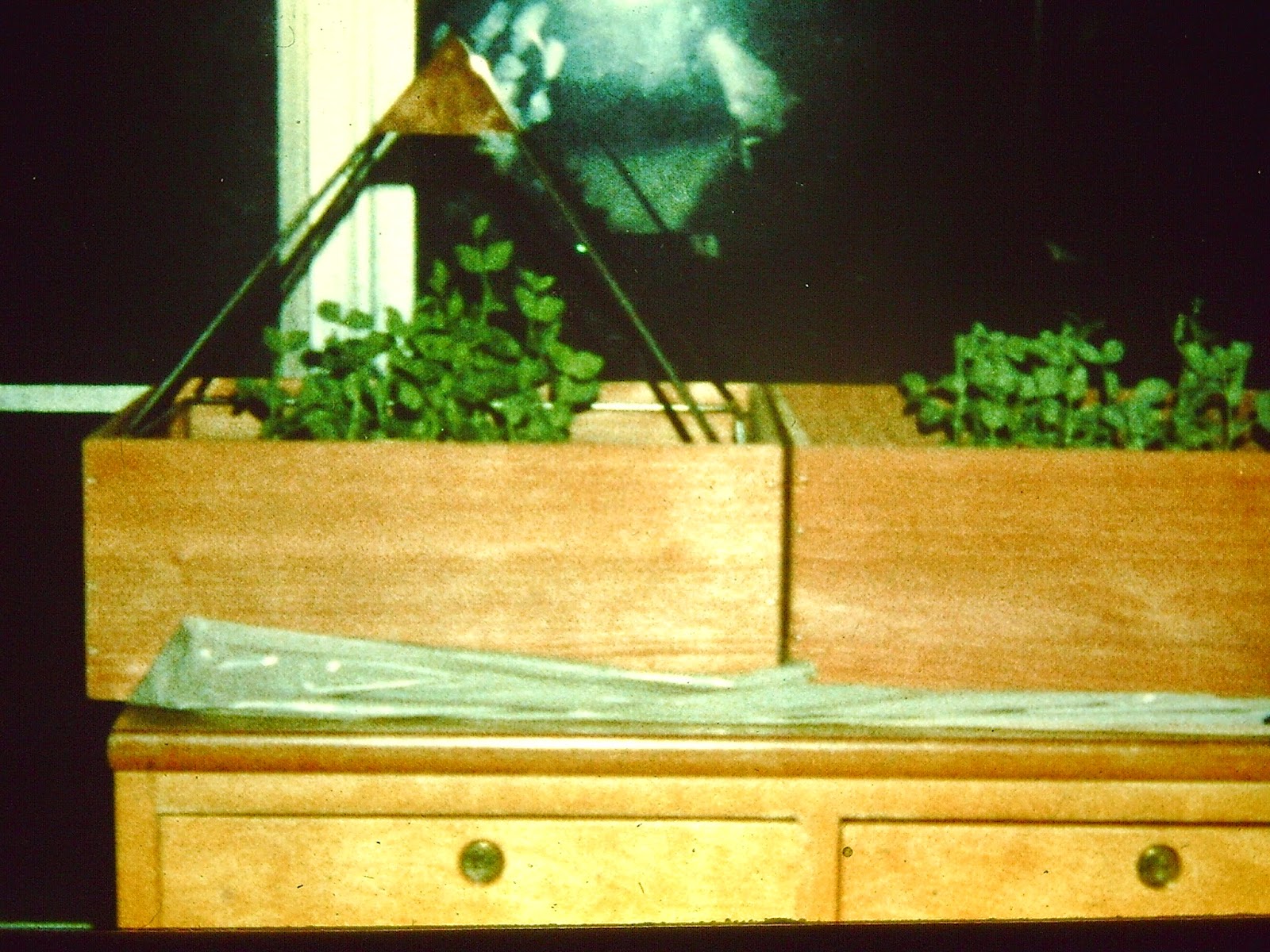 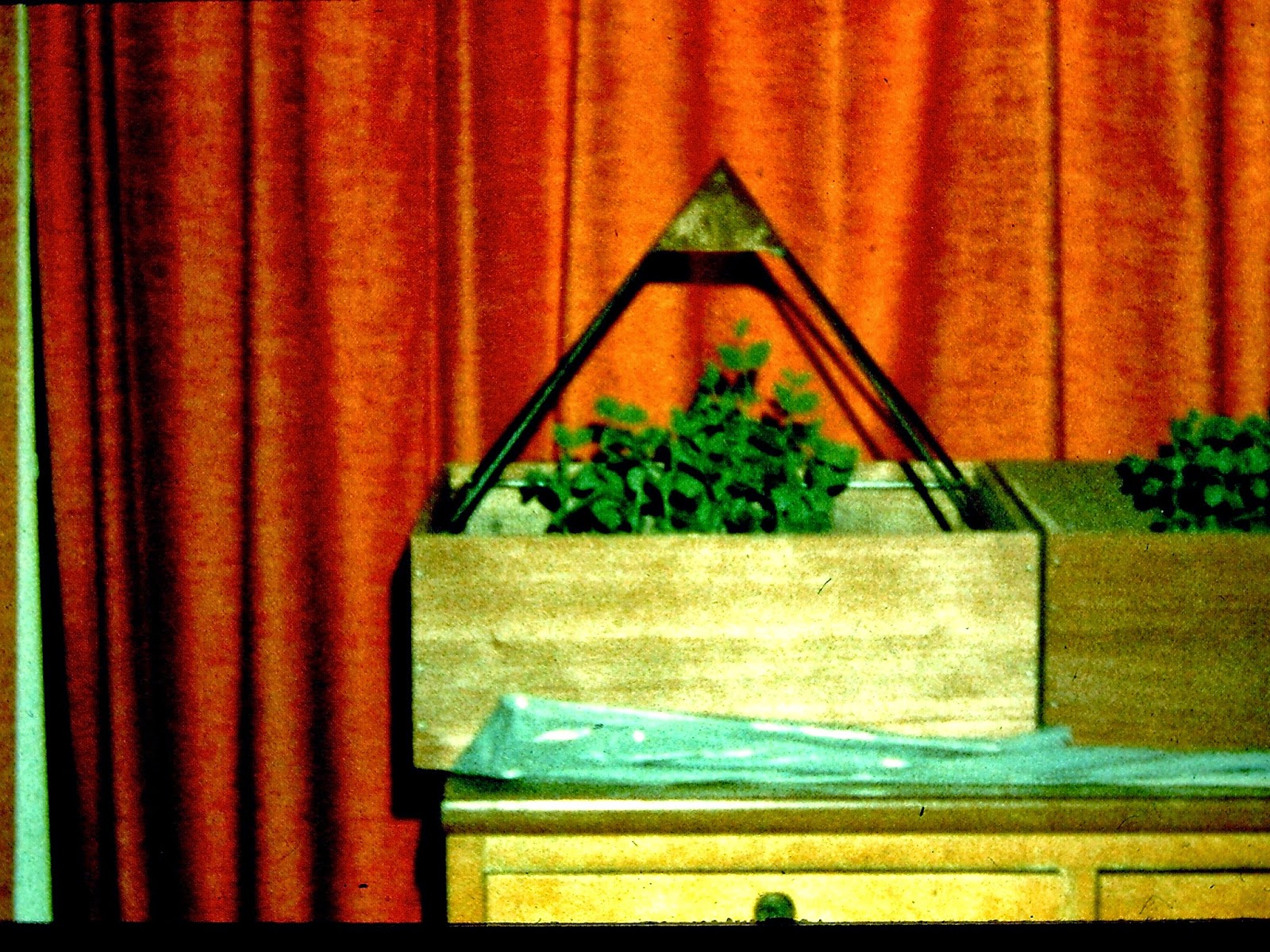 Day sixteen. Weirdly, the pyramid-ed plants seemed to be striving to fill a more pyramidally-shaped space. 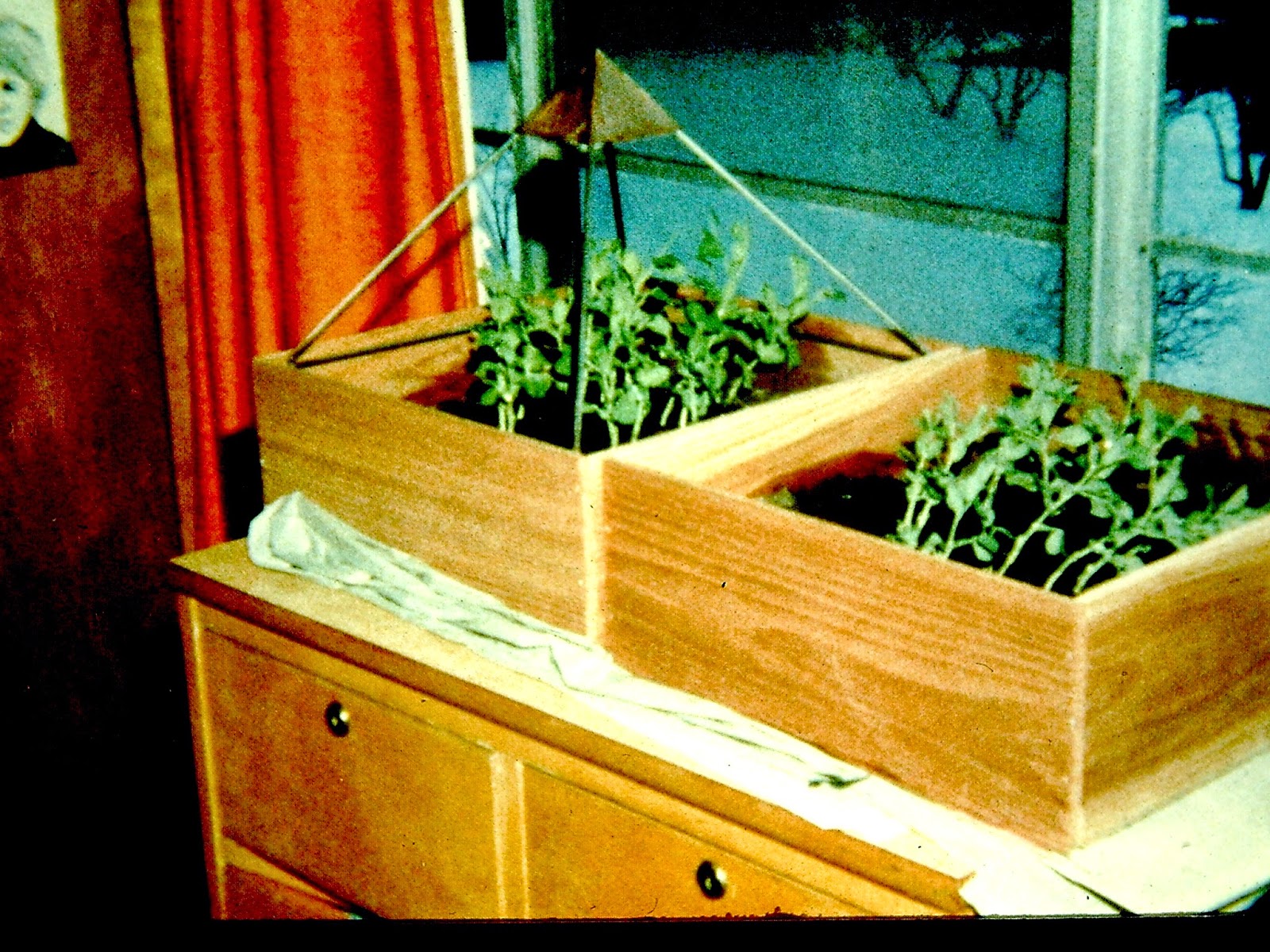 Day nineteen. Kathy at the end of the experiment checked the thought that comes up at this time: were the non-pyramid-ed plants just "lazier" and not standing up as straight for some reason. She weighed their relative masses and the pyramid-ed plants had significantly more "bulk". 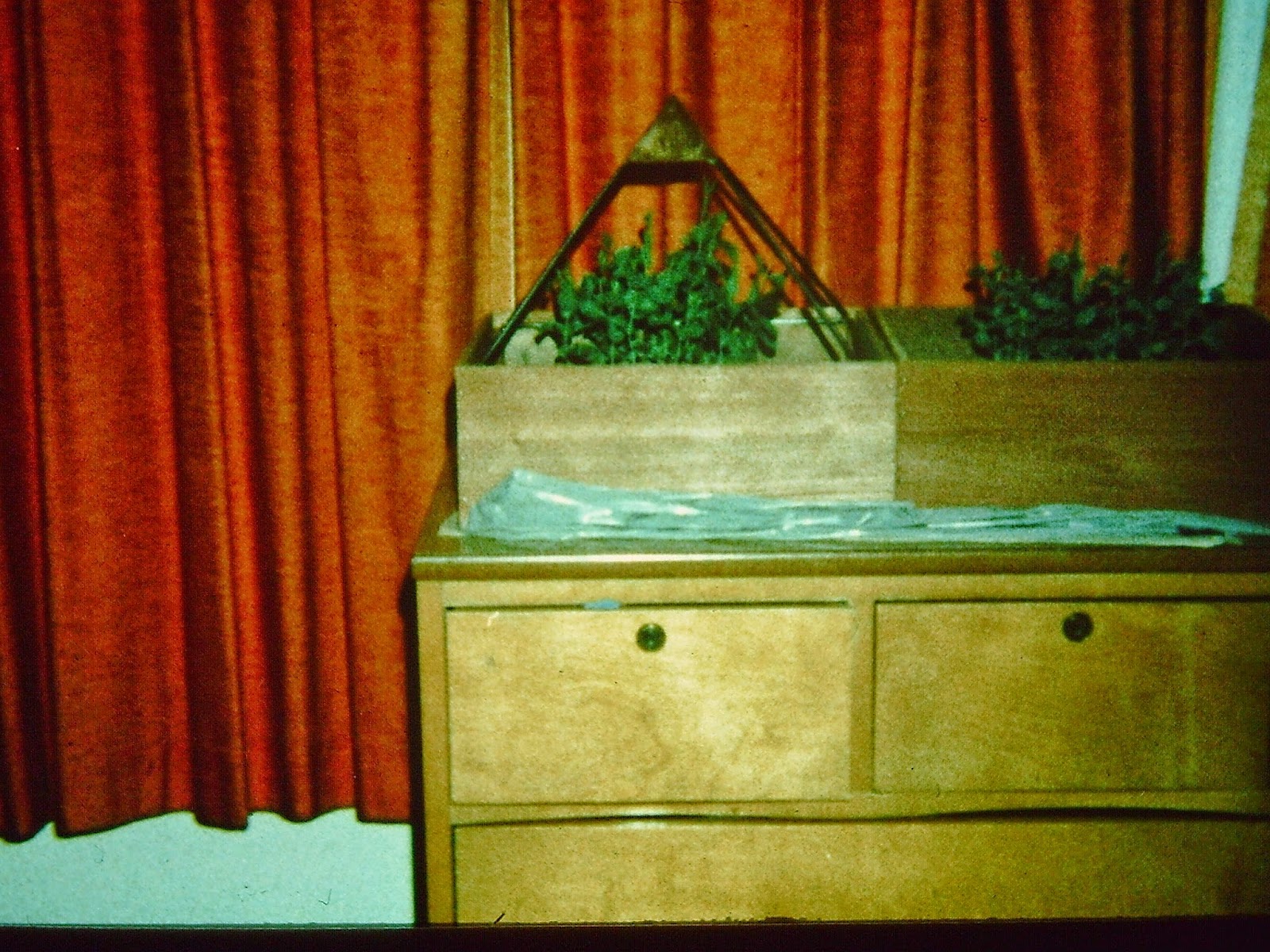 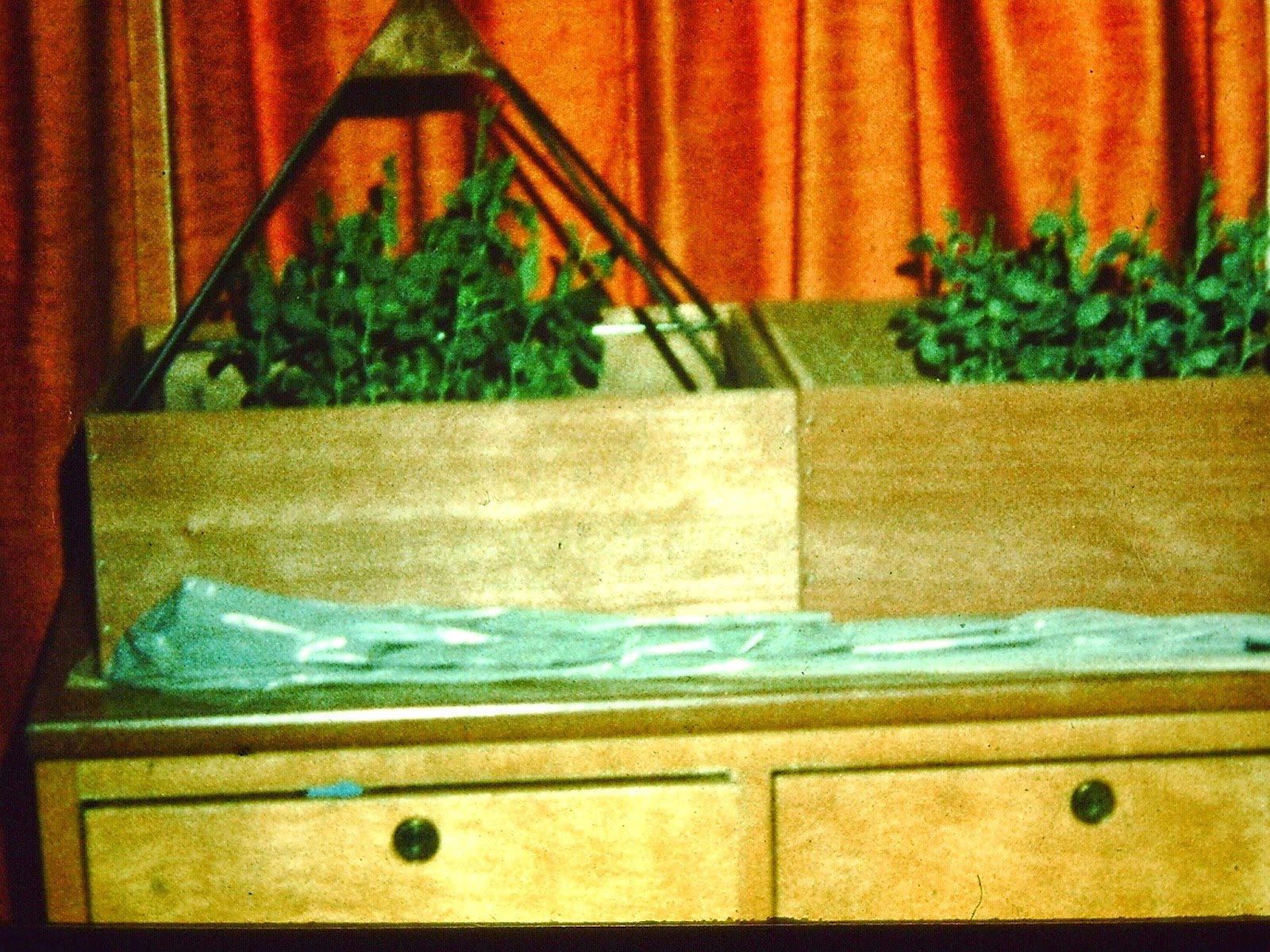 Day twenty-four: last day before the culling and the measuring [stalks and roots were also longer.] My Good Girl had run a proper scientific test [as much as a dorm room would allow] and was all smiles. She also was never a fool, and knew that she would need to do this many times [repeatability of results] and under better "lab" conditions [control of variables], but all-in-all this was a success.

BUT HOW COULD IT BE?

I mean, really.... I ran a few growth experiments myself with these planter boxes and got [if I remember correctly {40 years ago, folks}] two no results and one positive. But still... what was going on? No "energy" has ever been reliably measured inside the open-work space, just as you'd expect.

I'm flummoxed, I'll admit. My "theory" is that neither Kathy nor myself [on my one "success"] were witnessing the result of some mysterious but unmeasurable power. Nor do I think that she was just lucky [and certainly not hoaxing]. I think that Kathy "did it herself".

There was a study done by the reverend Franklin Loehr which got published as The Power of Prayer on Plants which looks quite like Kathy's results when Loehr prayed for one batch of plants but not another. Normally one would take this with tablespoons of salt, but Loehr blew the science boys at NOVA away when he demonstrated the same effect for them with corn plants in a locked terrarium planter with their cameras as witnesses.

Still, what was going on? I refuse to buy into a hypothesis that God cares about relative rates of corn growth. But I DO think that we human beings can influence [sometimes] the external world by our intentions. And here we return full circle to the last post about JB Rhine and Psi and Bob Jahn's final proof that we all demonstrate at least low levels of psychokinesis.

Is Loehr's work not like "faith healing"? He thought of it that way... a "laying on of hands" on the corn plants, without touching them? Was Kathy so joyfully hoping that the pyramid covered bean sprouts would grow tall, that, bless her, they actually did? If I ever had a student upbeat and full-of-life enough to transfer something into her experiment it would have been her. 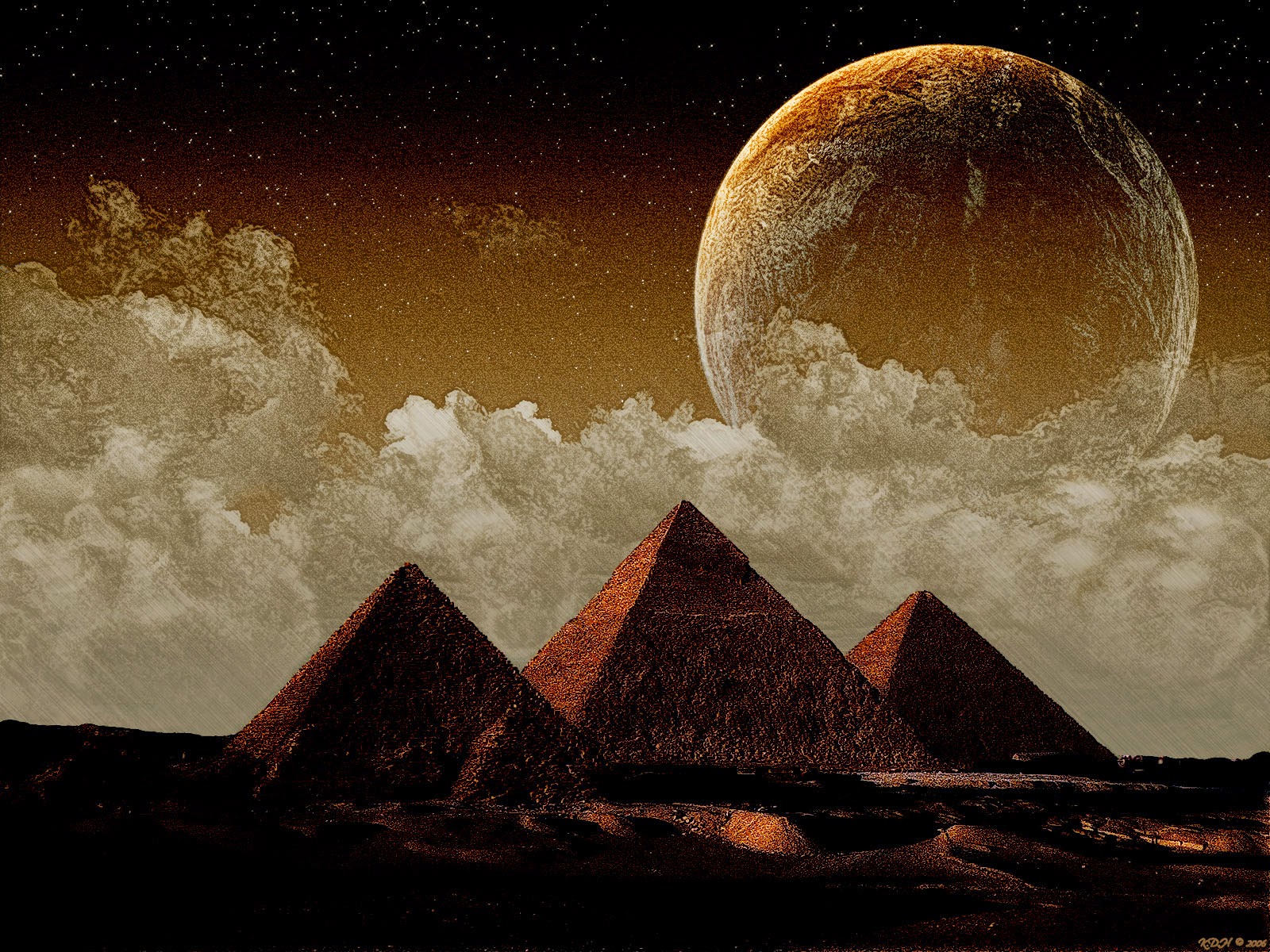 As far as the pyramids having "magic" in their shapes, who knows --- the Big Ones certainly do. But... I don't think that their power is too mysterious --- just awesome. 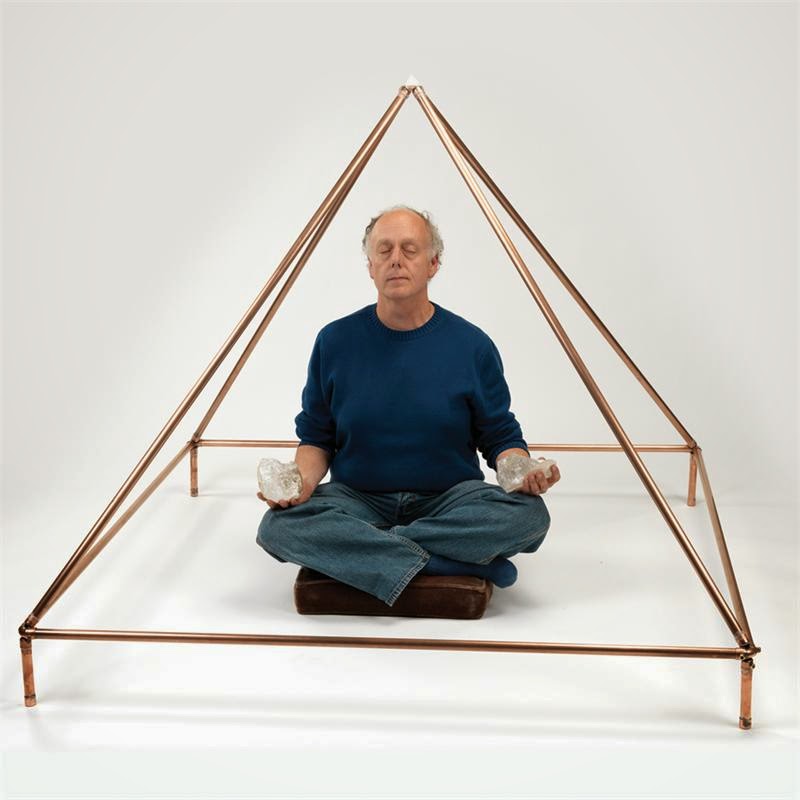 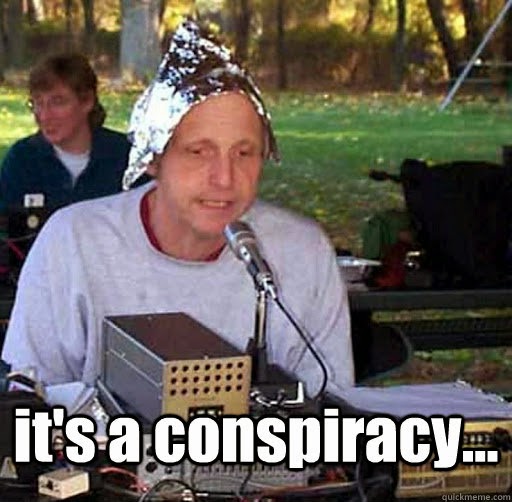