Not Quite Back Yet

HELLO from the bottom of my Black Hole.

I've not quite gotten a handle on this "moving house thing", but at least things are finally [literally] moving over to the new residence --- not me yet, but allegedly soon.

To show you some boring pictures of the Anomalies Archives part of this, I'm attaching some sort-of sequential shots of the archives being reconstituted ... and if you steel your way through that, I've included a little UFO essay at the end of them. 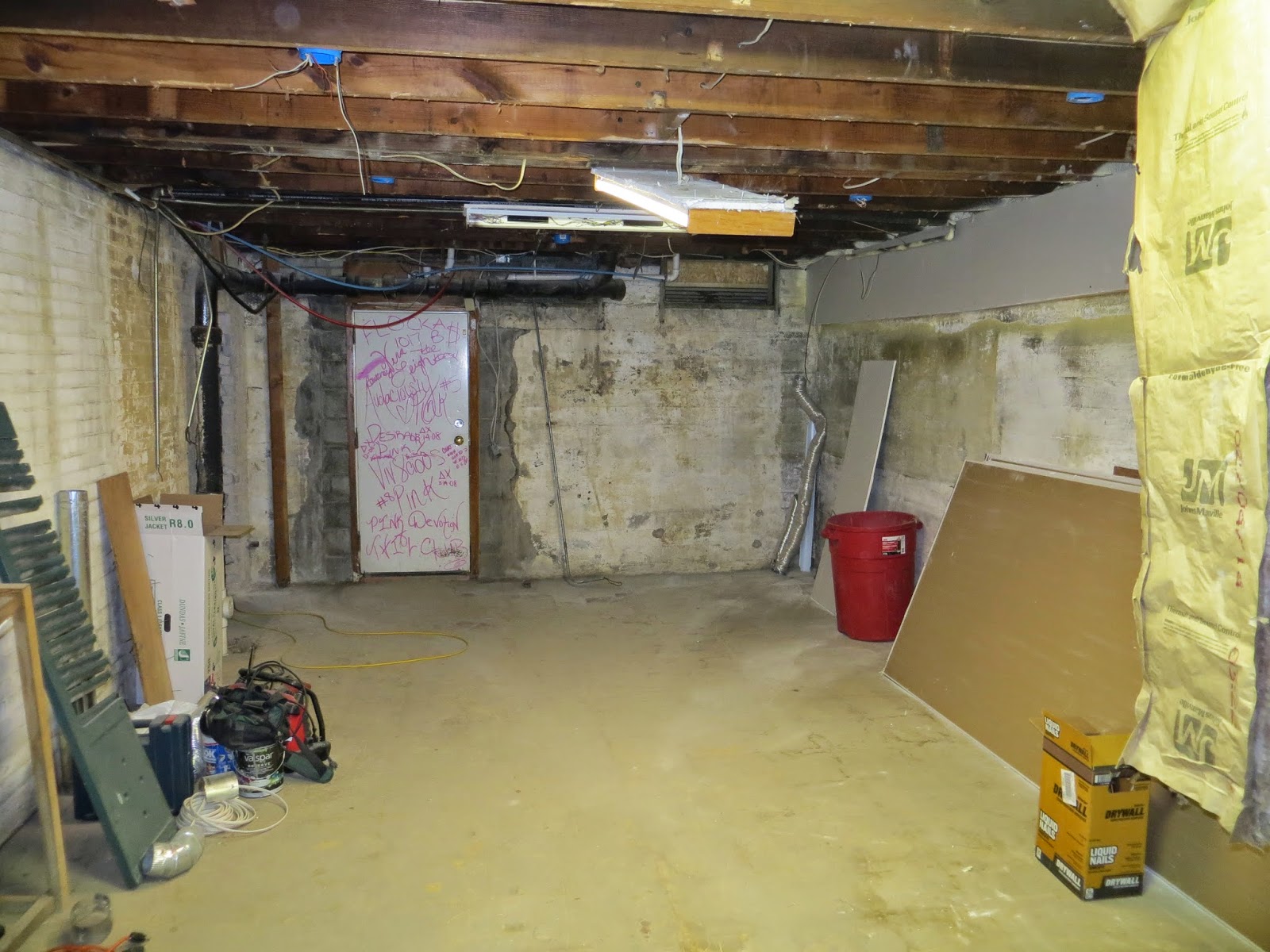 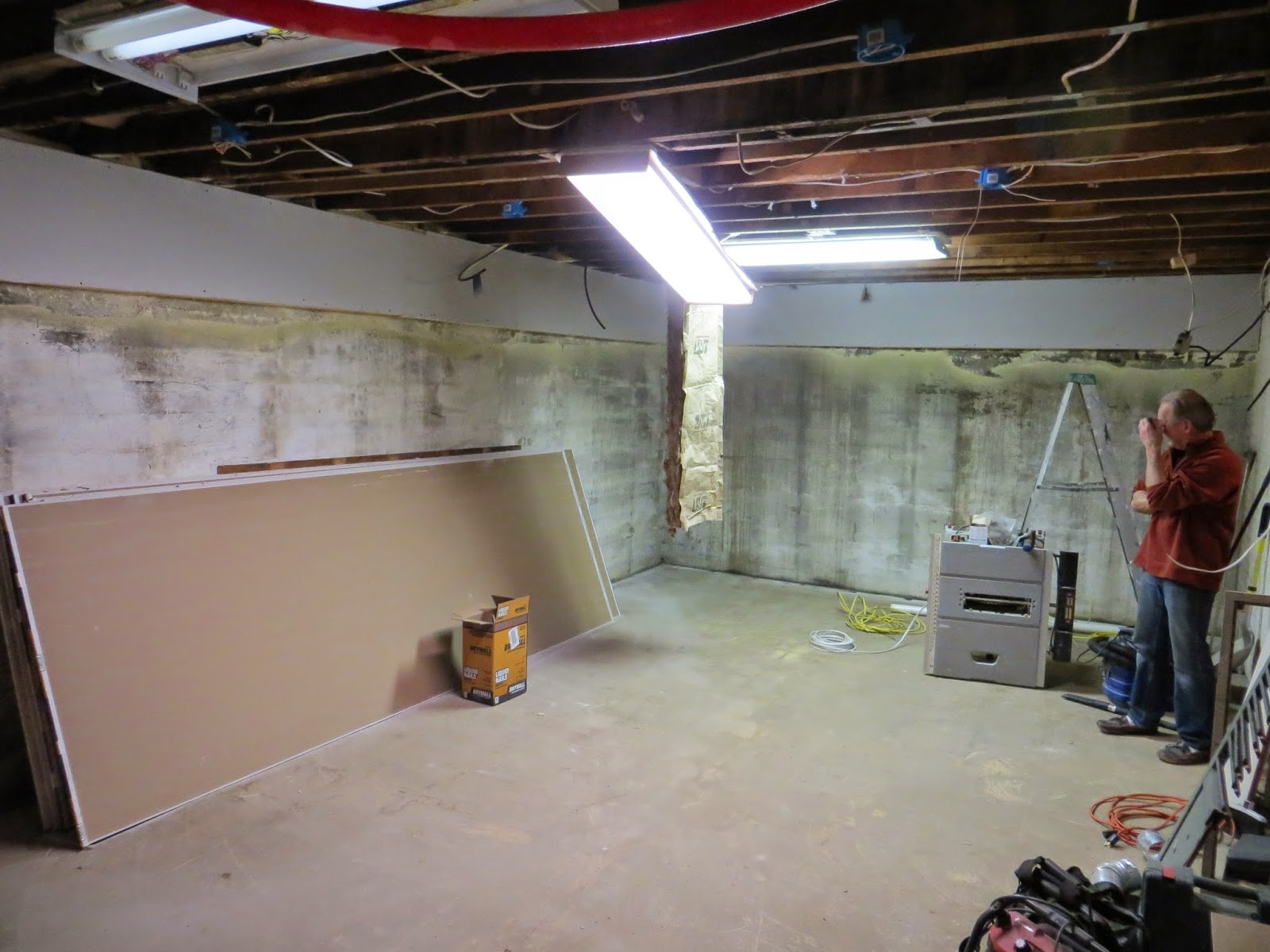 What we had to work with. 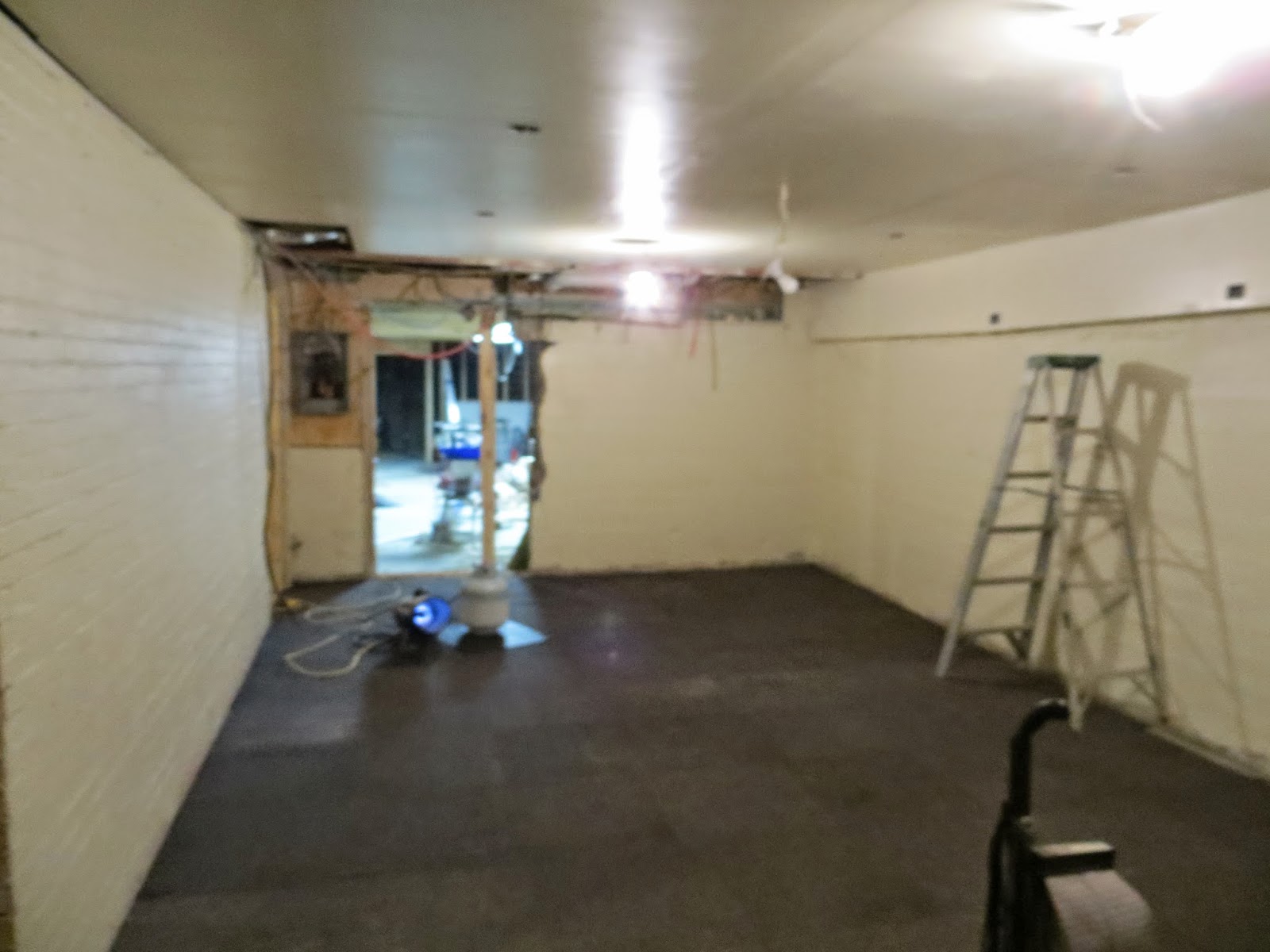 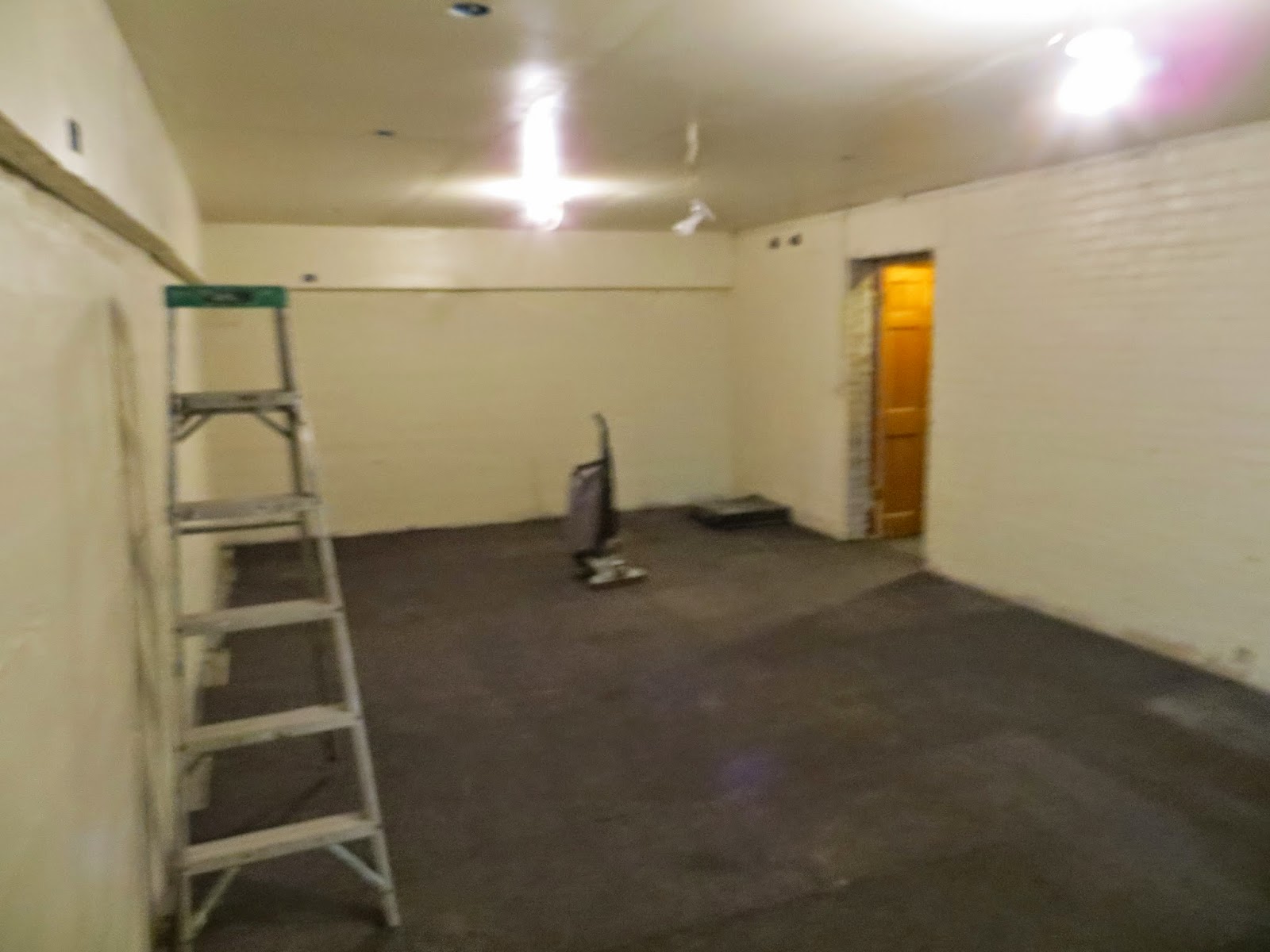 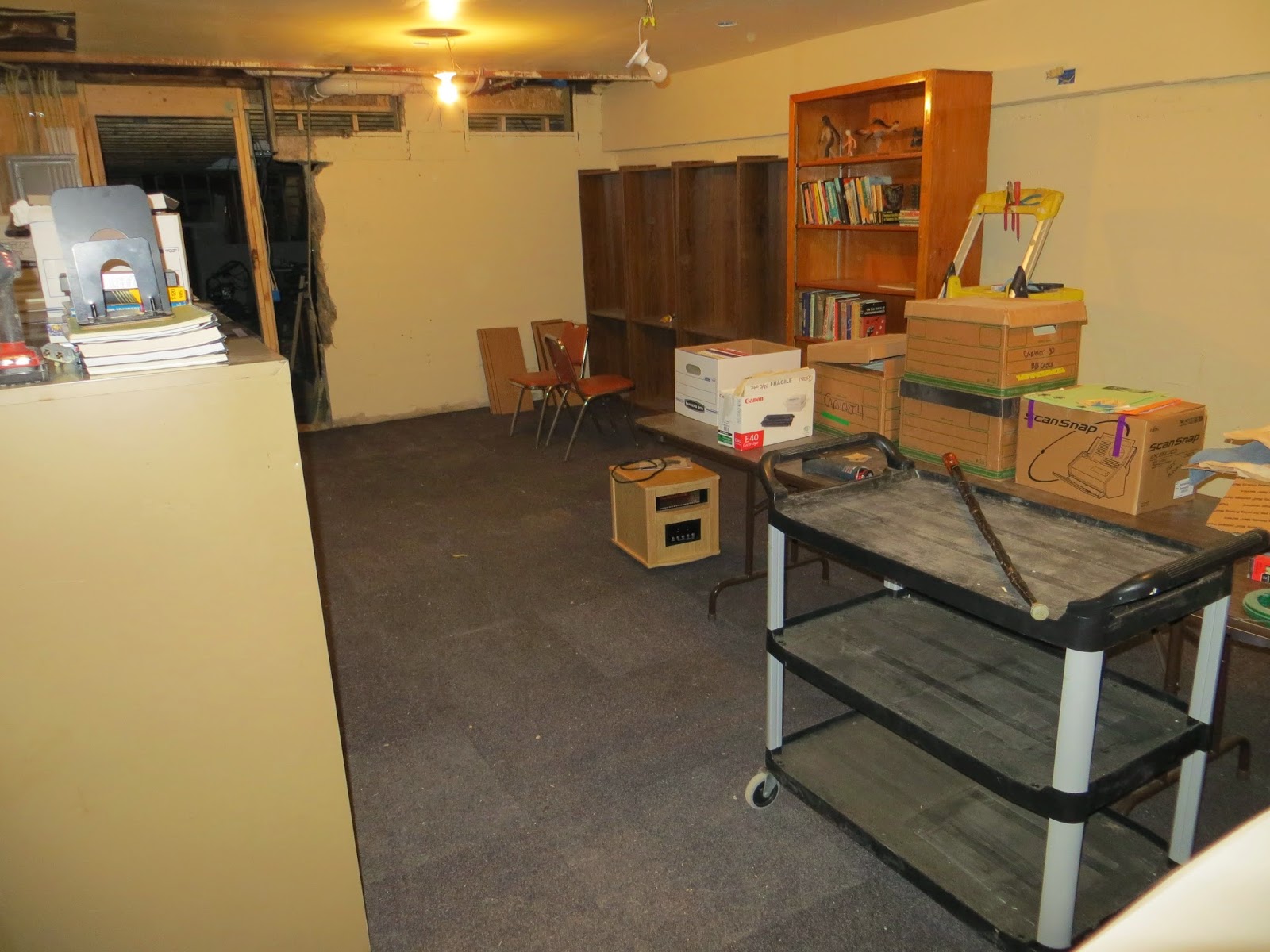 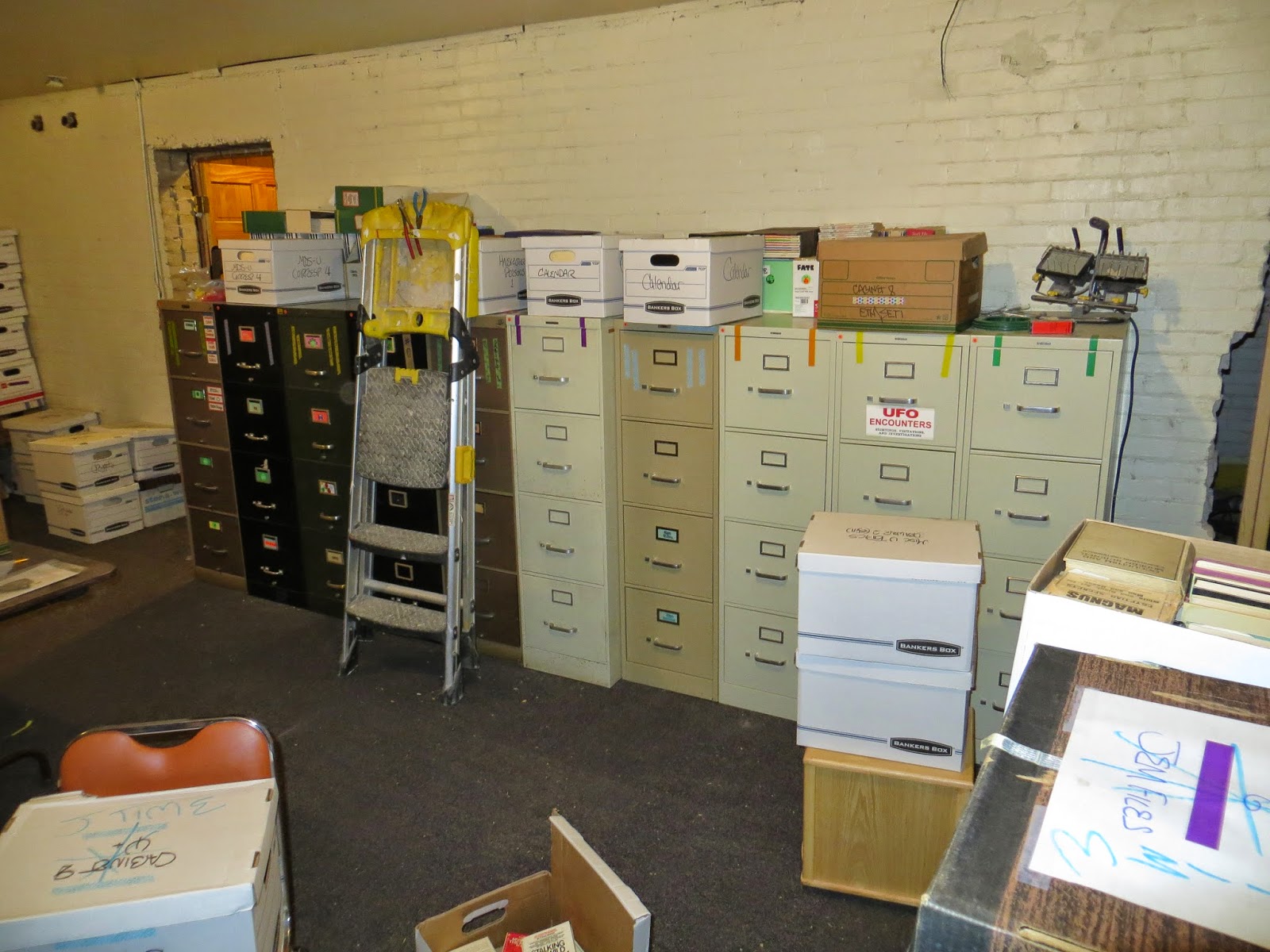 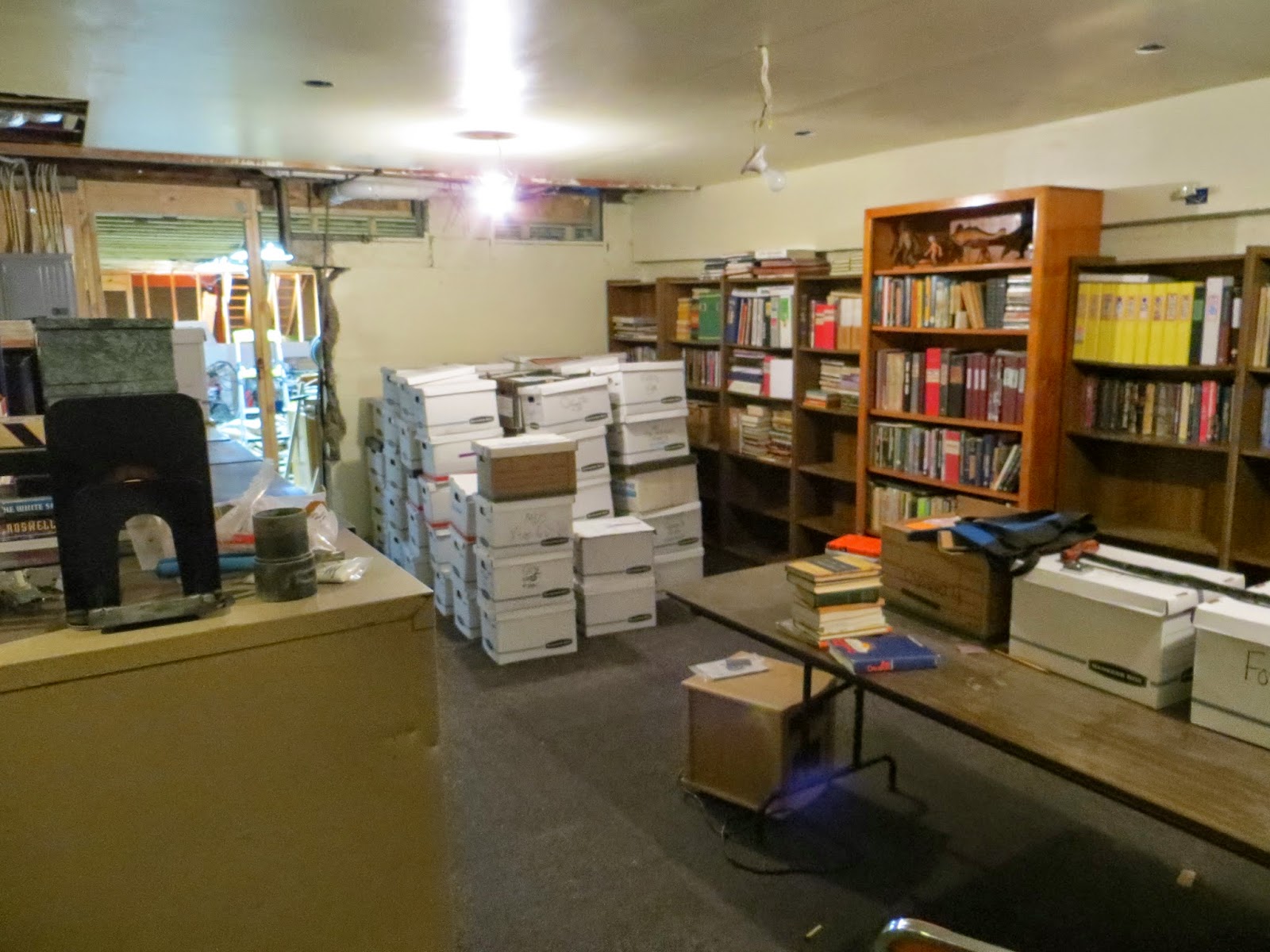 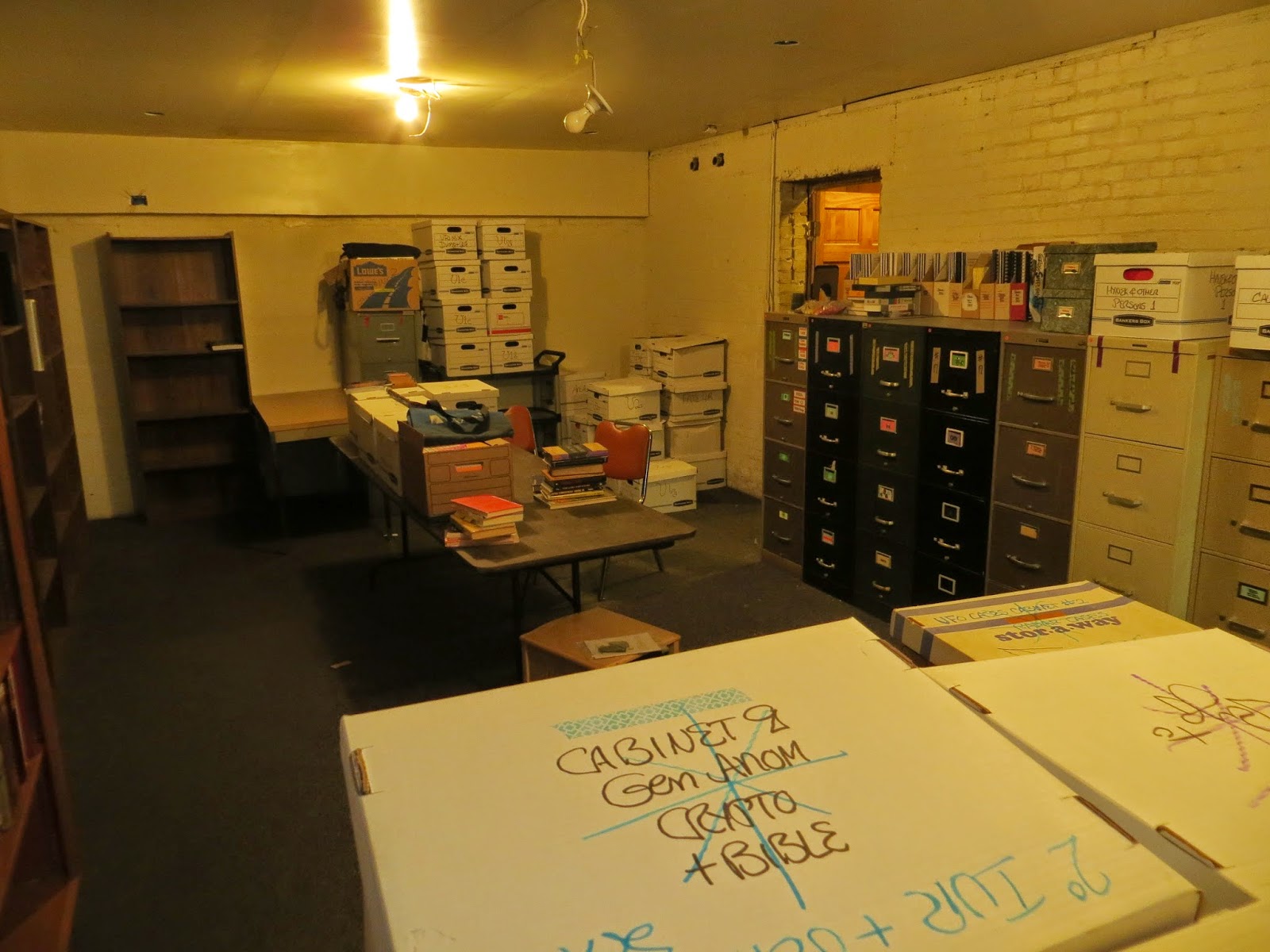 With enough imagination, you can almost see it.... 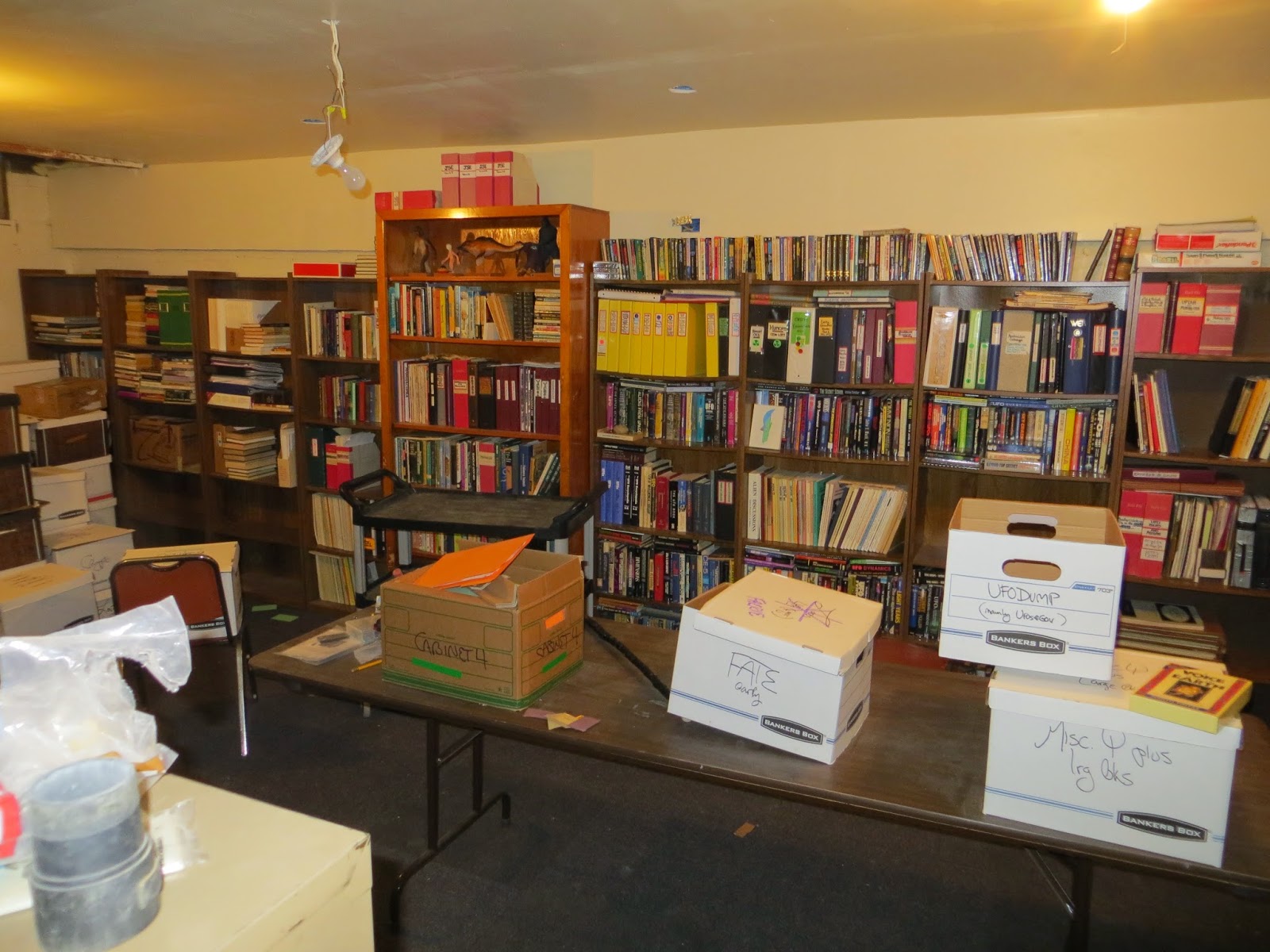 So.... lots still to do. My own sleeping quarters for one thing. But it feels good to see actual concrete activity.

And now, as promised, a little something about UFOs ... 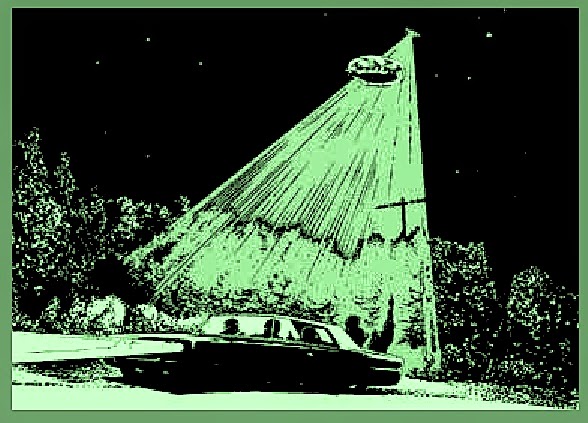 Southeast of Mansfield Ohio, October 18th, 1973, about 11pm: a Mom, Mrs Jeanne Elias, was watching the news in her home while her 14 year old son slept. A sound like a helicopter seemed to be approaching and quite loud. Just then her son shouted out wondering what was happening. The sound had awakened him, and his room was engulfed in a strong green light. He thought that something, perhaps the helicopter, was shining a green spotlight on their house from right overhead. Neither he nor his Mom wanted to go outside to investigate.

Southeast of Mansfield, Ohio, same evening, same time: a Mom and her children and nephews were returning from Mansfield to their home in the country. They first saw a fast-moving red light moving south. They thought that it must be a light plane. As they crossed the Charles Mill Reservoir however, they saw two lights, one red, one green, moving as if one. Then there was the sound of a helicopter. The lights seemed to go directly towards the helicopter, almost visually merging. The adult, Mrs Erma Delong, stopped her car and they got out. The green light flared and all the surroundings went green. Even their car looked green. The lights and the helicopter seemed to move in tandem for a while, and the light just extinguished. The helicopter then went on its own towards Mansfield.

These are two of the four kids' drawings. Given the distance away and the excitement, they sort of "split the difference" as to what the object actually looked like, as we will see. The experience made quite an impression on the family and they still talked of it decades later.

"I remember that the whole top of the sky was lit up a dull fluorescent green."

But there were four more closely-engaged witnesses to the "lights".

On October 18th, around 11pm, an Army Reserve helicopter was approaching Mansfield on flight from Columbus, Ohio. The crew had been taking their annual physicals and had been given the go-ahead for their work with the 316th Medical Detachment stationed at Cleveland Hopkins airport. The four men were skilled personnel. The crew medical officer was Sgt. John Healey, a Cleveland police detective. The technical expert was Specialist Robert Yanacek. The man piloting at that moment ["in the left seat"] was Lt. Arrigo Jezzi. The senior officer [co-piloting] was Captain Lawrence Coyne. Coyne was the oldest of the crew at age 36.

Yanacek was the first to see the red light off to their right [east] which seemed to be paralleling them. Coyne and his crew thought that it could be an Air National Guard jet, part of a Cleveland based squadron. Moments later the red light took a severe turn and accelerated in their direction. Sgt. Jezzi, from his left seat couldn't see this very well, but Captain Coyne and the other two passengers were alarmed. The thing looked as if it were heading on a collision course. Since Coyne could see this better than Jezzi, he took the controls and put the helicopter into an evasive dive. 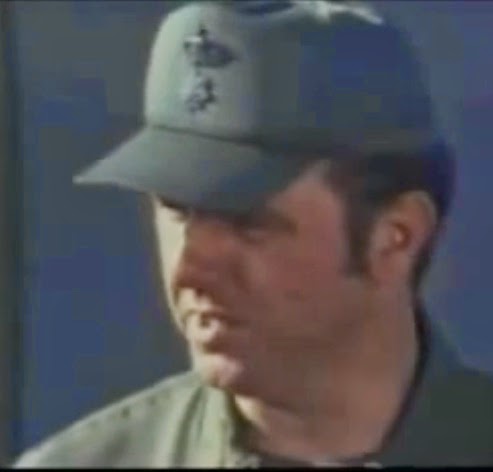 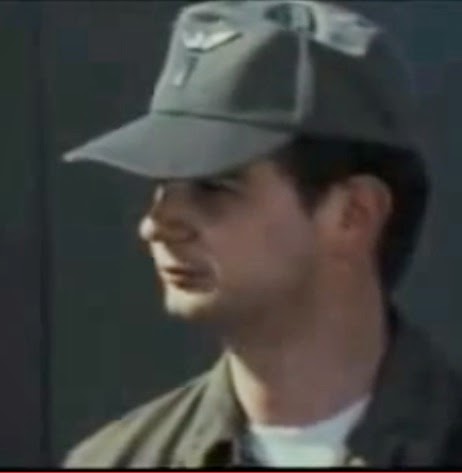 
It didn't work. The object came directly on, and halted close by just above and in front of their helicopter. At this point they had a very unwelcome and threatening front row seat. It is difficult to judge distances even in a close encounter of this magnitude, but the object filled the forward plexiglass window. The crew guessed that the craft, or whatever it was, was 60 feet long. Jezzi thought: "Those commie bastards! What are they up to?"

The object seemed cigar-shaped, like a sleek thin disk with a metallic surface and a scooped tail.

Captain Coyne had dropped the helicopter about 2000 feet in his attempt to evade whatever this was. He was still attempting to evade it, when a brilliant green "spotlight" swiveled from the rear of the object and beamed directly into their cabin. At this, the helicopter began climbing even though Coyne still had its controls in descent. The whole experience was exceedingly strange, but this was the strangest part. The helicopter seemed to be being pulled upwards with the object, but "impossibly" without any feeling by the men of this acceleration, nor any sounds from the helicopter of strains in the structure or the engine. 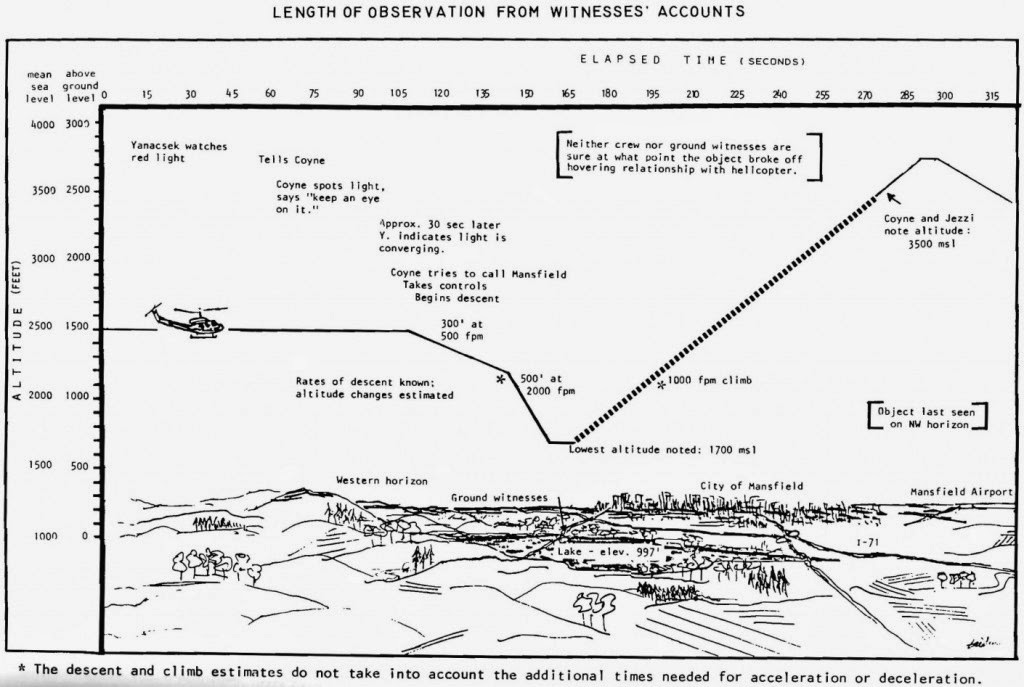 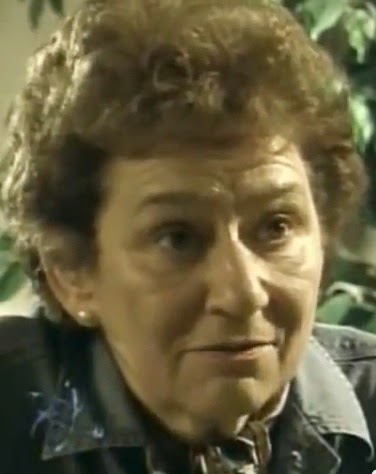 Jennie Zeidman, the longtime associate [beginning as a graduate astronomy student] of Dr. J Allen Hynek, the former USAF scientific consultant on UFOs, did a terrific job field-researching this case and with the multiplicity of witnesses was able to produce an excellent time-and-place graphing of this encounter [above].

(Mrs. Zeidman is known for her extreme dedication to these field studies and  her monograph on the now-called "Coyne Incident" is a model of thoroughness.)

Shortly after the "elevator ride" taken by the helicopter, the green spotlight shut off and Coyne felt that their own craft was back under their control. The unidentified object and they went their separate ways.

Captain Coyne and his crew immediately reported the near collision. 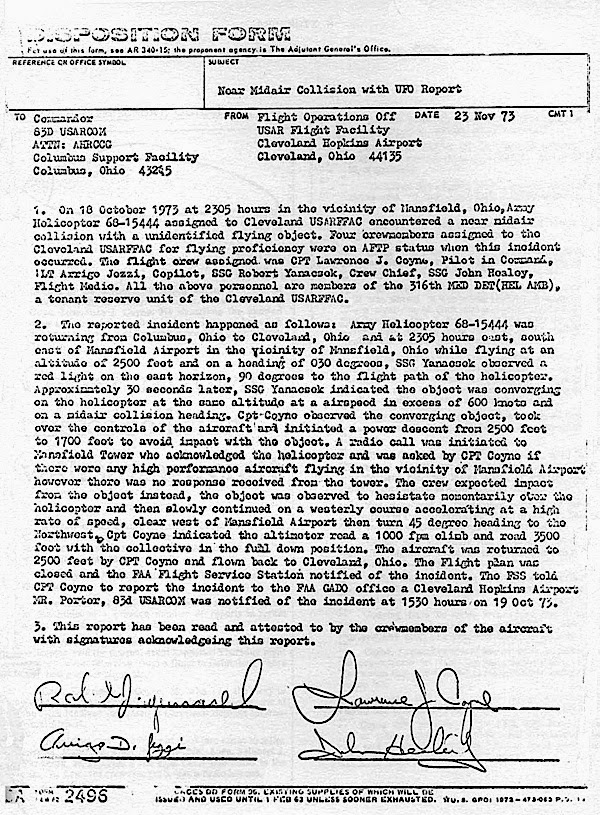 This event was chewed on by the crew for a long time. The more that they thought about it, the more obvious it was that there was no good explanation for the thing encountered. The object was a thin-aspect aeroform, clearly solid [it seemed metallic and blotted out the stars behind it], could accelerate with extreme speed and stop dead in front of them. And then there was the beam.... 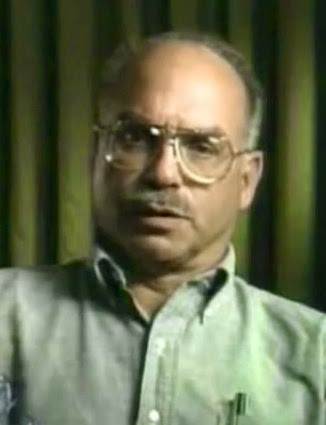 Sgt. Healey, the police detective and crew medical officer, was particularly unsatisfied with the lack of understanding of the incident and the seeming blase attitude about something this astonishingly strange.

"The object moved at a very fast rate of speed. It saw us probably before we saw it. It just tracked us because we had all our navigation lights on running and blinking. "

And the light... " This was just a humungous green light shining down on us. And a very definite cone shape; you could look at the light and you could actually see the beam of the light. It scanned us for that instant that it hesitated over us. It scanned us and then it took off."

Healey, like the rest of the crew, wondered why there was no more interest and even urgency in such matters. Even at the most basic level, this incident involved a seemingly threatening mid-air collision which panicked the personnel.

(As an aside, the author of this current piece had the pleasure meeting Captain [by then Lt. Colonel] Lawrence Coyne at a relatively small town meeting about UFO cases where he reminisced about his encounter. He gave the impression of the fellow you'd like to have as a next-door neighbor, a kind and unassuming gentleman. He stayed with us as long as he could and then apologetically rushed out to attend his kid's soccer game.)

The "Coyne" or Mansfield incident has never received even a marginally serious mundane explanation. The "best" that any contrarian could come up with was a colossal error of perception involving the four person crew and the ground witnesses of a red-then-green meteor ... an almost embarrassing concept given the time duration and behavior of the object.

Hope that this case write-up was of some interest folks.

I still have much to do with the Park Street [new] residence. I'm guessing another month to get things smoothly functioning again. Till then, Peace and Health --- and, if you're in Michigan, an early Spring --- TALK ABOUT ANOMALOUS if THAT happened!!