Abduction and Hypnosis: a Letter from the Past. 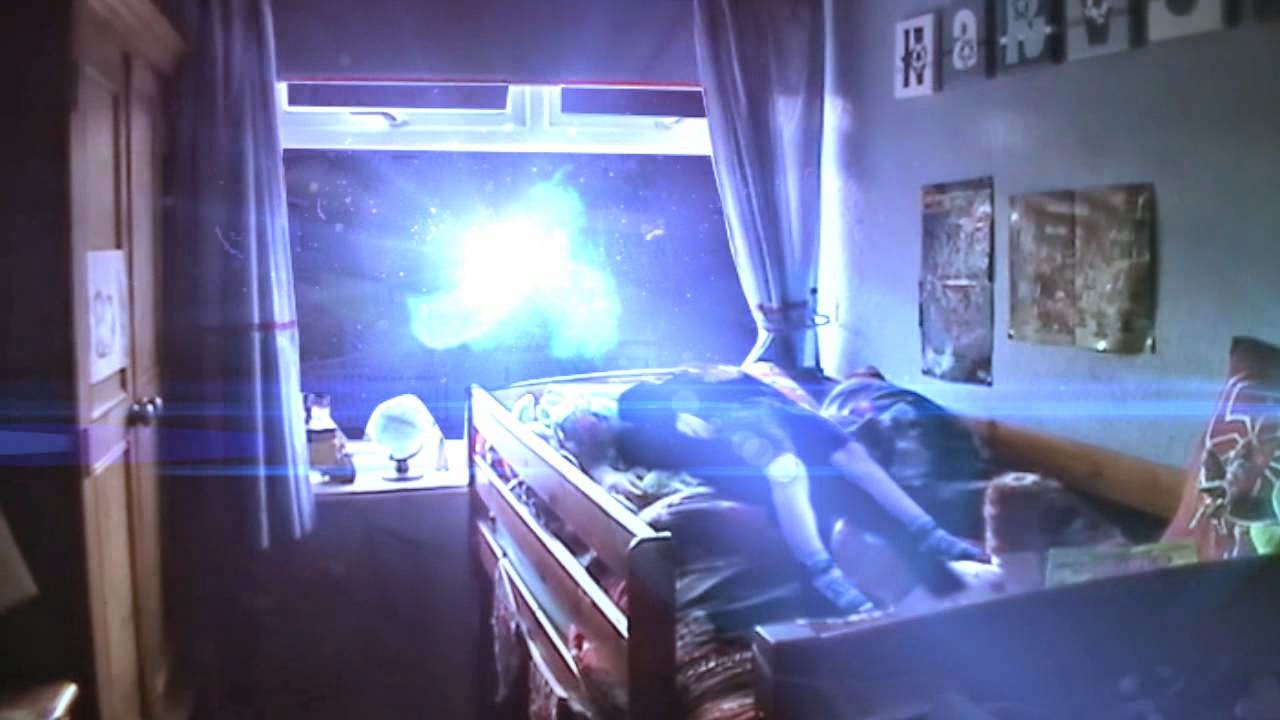 I've had a copy of the following letter for a few years, don't know how many other folks have read it, and don't know whether it's published anywhere. It makes a strong statement about alleged UFO abductions of a certain type.

This will be controversial. I've not put it on the blog before now because I know that it will irritate colleagues, even some friends of mine. We all, every day, make these sorts of decisions: what to say and what to leave alone. I'm going to try to say very little myself and just let the letter writer speak.

This is, as you will see, a person who has earned an opinion. 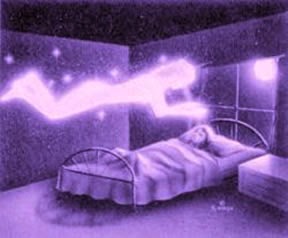 The following is merely a full transcript of this letter, written to Ted Bloecher in 1977. The author was writing him to mention a case involving a husband and wife in Connecticut, which Ted was interested in learning more about.

Here is a case, if you're interested - complete with everything. I would put it in the contactee-type but Gail had hypnosis with Jim Harder last year and as a result told of being taken from bedroom on board a ufo when she was about 12 or 13 years old. She became a contactee. The interesting thing is recently her husband joined her and he believes he is one also.

Apparently they use self-hypnosis and believe that they are receiving earth-shattering information about ufos - their term, complete with descriptions of aliens, messages, and he is somewhat upset for she reads his mind, and always knows what he is doing, although innocent.

They had contacts with one investigator, who, after a while was walking around with a Bible under his arm, and muttering about the devil. However in the past, a high rate of ufo sightings occurred behind their home - and they have seen numerous ones, including landed ones.

I have never met them personally, but have talked for fairly long periods of time via phone. They are looking for reassurance that they are not crazy - of course, they are not. But they have done damage to themselves - how many I have worked with! A person has a fairly good sighting, and somehow he gets trapped into thinking he is a contactee - he is connected with ufos in some way, so his friends make all kinds of suggestions - meditation, self-hypnosis - and the person goes on to drag out of his own mind all kinds of weird, nonsensical thinkings which he begins to believe. It takes two to three years of actively working with this type of person to get them back on their feet - to trace back every thought and how it originated. At the moment I do not have the time; also distance involved to work with them by phone would be too expensive. Unfortunately, thousands are brain-washing themselves thru readings contacts and in some areas attendance at training sessions to put themselves in this unhappy situation. While others are making them, I am curing them. But I can not come out and tell them what is happening to them - they must learn to realize this themselves, and to pinpoint some basic need which is being satisfied by this, a real human need of being special in some way. The same kind of situation happened with Marianne, but fortunately she is cured now, and I was able to protect her from investigation until we had this success. We do not have this type of situation in NH. Maybe because people who have close contact, get in touch with me.

It would be appreciated if you could contact them -- is it ok for me to give them your address? 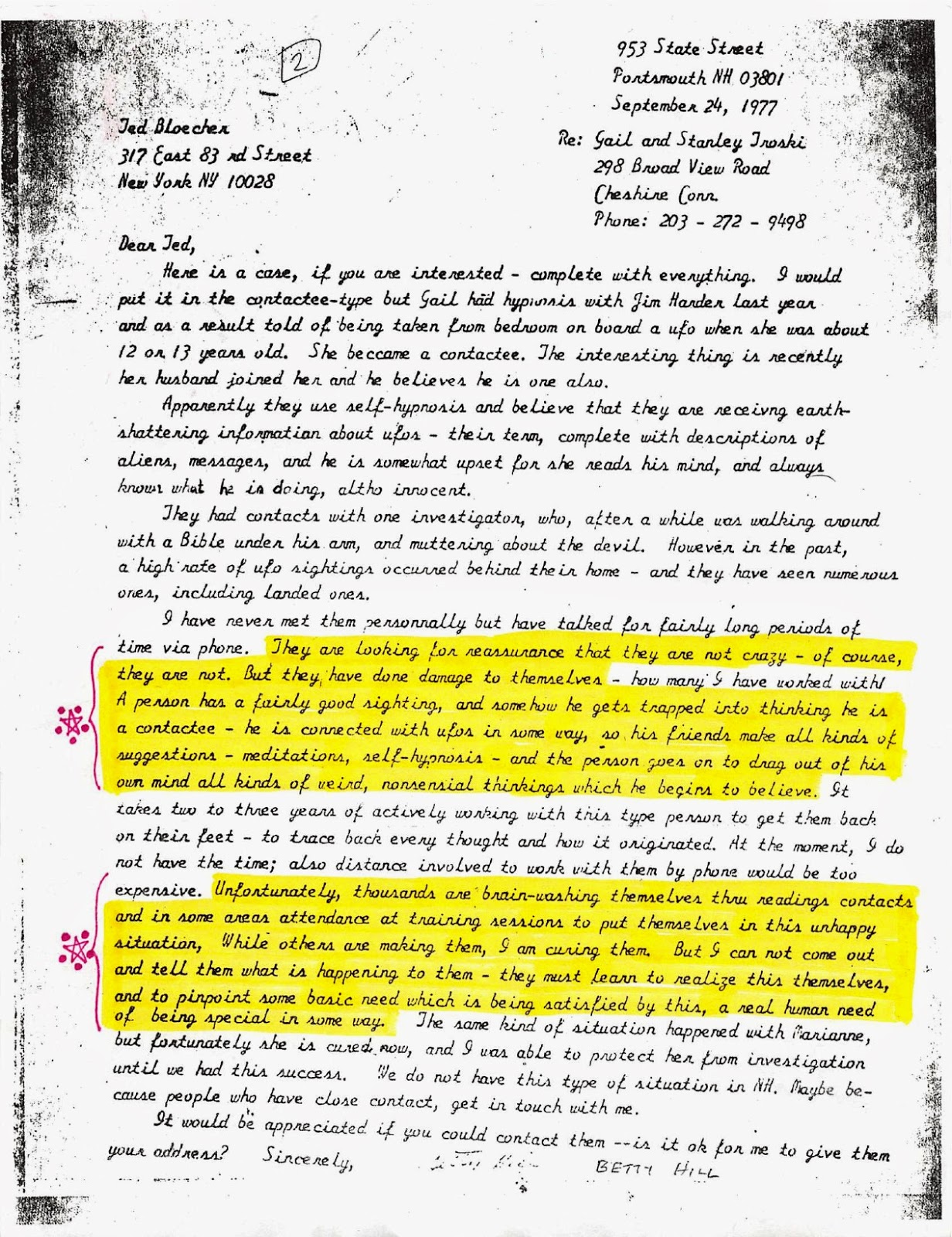 I'm going to say the minimum that I can shut myself up to say, and let this simmer.

1). Betty Hill had earned her opinion, particularly by 1977;

2). She uses the term "contactee" in her own broadly-conceived way [again, remember that this is 1977]. She includes any UFO encounter claimant who believes that these very close interactions are occurring to them all the time or "regularly." Whether "pleasantly informational" or just repetitively intrusive, she is concerned about people talking themselves into WAY more than what has actually happened to them;

3). Elsewhere, I have read Betty taking to task not only the self-hypnotizers [or even trusters in hypnogogic state imagery or dream memories], but particularly the, for her, abusers of bad and shallow unprofessional hypnosis techniques, who in her view were producing false beliefs in people who had certain personal and to-be-taken-seriously needs ... but which were not truly UFO related.

Historically, Betty did not know that she was talking to a Ted Bloecher who would take her views quite seriously [as he did everything which had any sense to it], but who also would find his flexibility of thought gradually eroded by the arrival in his research life [in a little over a year] of a UFO experiencer who would become the leading abductions hypnotist of all time. 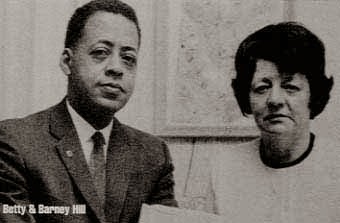 I am probably in trouble with a lot of people now [if they meditate on the theoretical and actual consequences if Betty's views are correct], but ... well, I'm old and can try to just drift off into the sunset  on this subject. For some colleagues, it might clarify a little more why I have been an appreciator of cases like Betty and Barney's, or Buff Ledge [and a few others] without being a fan of the mass of modern abduction/regular contact claims. 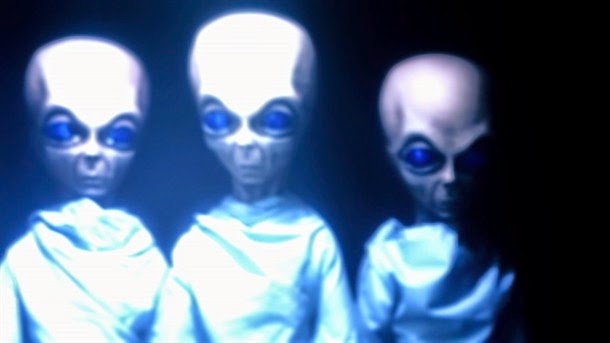