A Few More Incidents From The 1950s 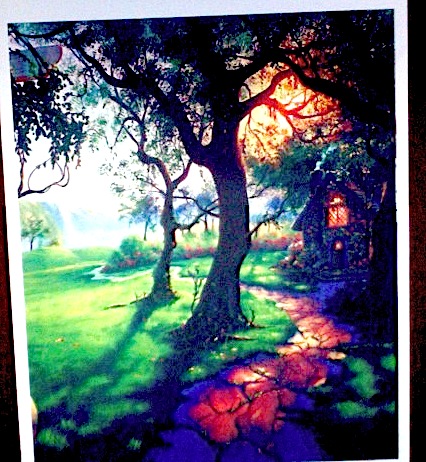 A. rural Australia. mid-20th century: This is a claim from a book of a known author who is sold on the general cosmology associated with spirit realms, nature entities, energy forms etc. (at least I think that this is the chain of provenance here.) The resource book is a somewhat rare thing entitled DEVAS and MEN. I think that the editor(?) of this compendium of fairy/deva writings in theosophical works is Geoffrey Hodson. I also believe that the author of the relevant essay in this book is a lady from Australia named Clara Codd. Both of these people were well-known authors in the theosophical community. The incident described below is a personal report to Clara Codd after a radio program. The witness was impressed by Codd's theories and so wrote a letter describing her own experience, wondering whether it was related.

It was a moonlit evening and the witness was feeling the atmosphere and went into her garden to enjoy the magic of the stillness. Standing there, she was surrounded suddenly by small flying beings that she viewed as Nature Spirits. They were a foot and a half tall, and floated about in light airy flight. From their head and shoulder areas came a glowing light or aura which streamed outward and down. This aura had the surprising result of making the viewer feel that the fairies had energy auras shaped somewhat like wings. As the moonlight passed through them, they scintillated like green, gold, and blue jewels, like "living opals." Then they floated up over the laurel bushes and disappeared.

B. Canby, OR, 1950.  This is a case which came into the UFO community, but unfortunately 1950 was a time much too early for a normal UFO investigation. The big UFO organizations did not even exist in 1950, and were years away from enough robustness that they might have gotten a good investigator into the area. Other than the USAF, the only other public name associated with UFOs was the man who had made the report which awakened the entire country to the phenomenon: Kenneth Arnold. The witness to the following report wrote, amazingly, to him almost immediately after the event. Arnold then went to her and did a personal interview. (WHY can't UK fairy cases be done this way?)

The witness (name and address known) was working on her lawn. On a neighbor's lawn nearby came a little person. It was just a foot tall and was facing away. The being then turned and she got a good look at it. He was a very tan-skinned male with hair colored like his skin. He had on a plaid shirt and what looked like work trousers.  He was stocky. On his head was a black skullcap. The witness tried to get another witness but the little man waddled away. When he reached a parked vehicle, he simply walked straight underneath it without ducking, and then vanished.

C. Somewhere in England in the 1950s. Ouch to the vagueness. This is a case from The Fairy Census (which did a fine service to the raw field of study, but due to vagueness and "witness distance" such as this, isn't a lot of help for anything but rough statistics and maybe sociology.)

I've included this incident here because the short narrative is modestly presented, fairly clear, and has a few interesting details. The witness was a young girl, perhaps entering-grade school age. She, her parents, and four siblings were out for a walk and she was running ahead of the herd. Thus she became sole witness. There on or at the path was a very small being, which she called an elf. She did not think of it as a fairy as it had no wings (her point of view on definitions.) The being was eight to ten inches tall and dressed entirely in "greens." The being apparently was not old looking nor stocky (i.e. not a gnome.) During this period where the two stared at one another, the witness felt that a profound silence had persisted.  (OZ Effect?) Then she snapped out of her state of amazement and called for her family, but by the time they arrived the "elf" had gone. "Naturally" none of her family (except her mom) believed her.

D. Lancashire, UK. mid-20th century. Well, this is another report out of DEVAS and MEN. Apparently it's a little better provenance in that a witness is named as is a rough location, and the source publication ("The Herald of the Star", a theosophical journal.) I'm of the belief or assumption that this story came from a letter to that journal. The reporter is fully in synch with theosophical jargon and uses it freely in the letter. The story is told as if the witness was living it as he wrote (dramatic effect?) I think that for your help in making your decision here, just putting his own paragraphs in here is best. 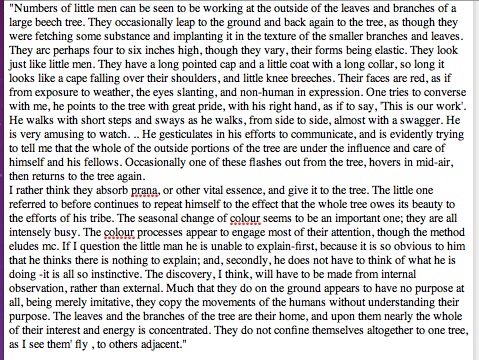 Make of this what you will. I read very small beings (4 to 6 inches tall) of a shape-shifting nature, but looking like little people. They have capes, coats, collars, and pointed caps. Knee britches. Red faces. Slanted eyes (giving me the feeling of very small elves.) They communicate somehow, and are in charge of caring for the trees. If they had wings, they'd be right from Disney central casting for a Tinkerbell movie (and probably quite a delightful one.) I do not get any information as to why Sergent thinks he so easily sees them while the rest of us do not. Maybe he has the luxury of the Second Sight and all of this is psychic.

He says one odd but interesting thing, something that someone merely elaborating on their philosophy doesn't have to say: "Much of what they do on the ground appears to have no purpose at all, BEING MERELY IMITATIVE; they copy the movements of the humans without understanding their purpose." In the bigger picture that Sergent describes, this comment makes no sense whatsoever, but for any of us who read a lot of fairy encounters (or UFO CE3s for that matter) there's something that resonates here. I don't want to rock and roll with speculation here --- the purpose of opening up Leprecat is to see if a case for reality of Little People existence can be made --- but there's an "itch" which lingers on many encounters --- the idea that the "others" lack something when it comes to true creativity or novelty. (That's what the Fairy phenomenon feels like; the UFO CE3s feel rather like the nonsense there is part of making the display deliberately confusing and unpatterned.)

E. Eliot. ME. 1950s. A case from a journal about anomalies. The editor is a known individual who is enthusiastic about such things.The strength of the matter is that this is a situation where the witness lived near enough so that the writer went to her place for personal interviews. The result is that the witness is named, located, and even quoted from the interviews. The weakness in the case is that the witness claimed a substantial history in communicating with persons not of this planet associated with UFOs --- i.e. she is what UFOlogists call a "contactee." I have shrugged this off (to begin with) because the instances with fairy beings seem separate from the UFO stuff in practically every way.

The experience goes like this: the witness' daughter was about six years old and sick one winter. She had arranged a recliner bed near a window so the girl could look out at the winter scenes. The girl called for her mom to come and see the fairies. Upon arriving at the window, there, near the snow covered limbs of a spruce tree, were 6 or 7 floating fairies. They had wings and were about a foot tall. The wings were diaphanous and they wore richly colored dresses of "velvet." Red, Blue, Green, Purple, Pink; there were more than one in red. These were Tinkerbells therefore but tall for such gossamer winged females.

The mother accepted the experience easily (given her propensity for odd experiences, but mainly because her daughter had imaginary playmates from an early age, and the mother interpreted this as those playmates coming to keep her daughter company in her illness, and for whatever reason allowing the mother to see them this time.) The mother tries to fit this into her belief system but doesn't really succeed --- her commentary about UFO contacts and this experience reaches no harmonious contact of thought, but sits on the page as two separate rambling monologues. The mother also mentions that later in time, her granddaughter told her of seeing little ground people (no wings) dressed in green and brown, who she called "lepricons". Again, this has no integrated rationale with her contactee claims.

So, not a lot of comfort zone today. Two claims embedded in theosophy, only one of which MIGHT have had a witness known to the publicizer. The Eliot, Maine case is rather nice in a lot of ways, but the witness needs more vetting. At least we have a personal interview and quotes. The Fairy Census case might also be OK but like almost all its ilk it lacks any closeness to the source. Only the Kenneth Arnold investigated case has personal interviews and timely quoting and investigating. That case looks like a Pacific Coast Native American entity in more modern dress. Maybe that's our one decent incident today.

Next time I'll try to insert claims from UFO case files which seem (at least to me) to be outliers and not properly belonging in the UFO field. Fifties cases. Veteran UFO researchers can guess one of those that will be mentioned --- a great "UFO" favorite of some, and, although a favorite in some sense, NOT a UFO favorite for me.

Till then stay healthy and stay safe at home as much as you can. 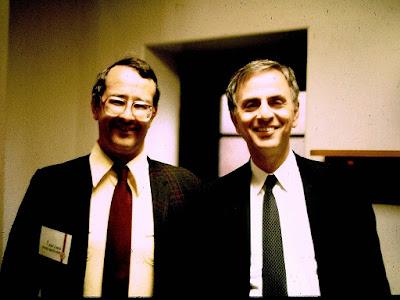