SETIans & UFOs: A {pathetic} Snapshot of who we are. 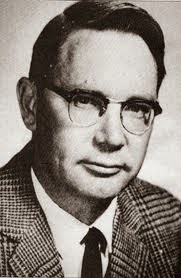 I was preparing my McDonald files for scanning yesterday, and came across many interesting things {to say the least}, some remembered and passed by at the time, some "new", as to remind me that there is still MUCH work to be done to tell the history of UFO studies properly.

The small thing that I'd like to share today is something Big Mack found out from Carl Sagan way back in 1967, when the Colorado Project was getting rolling [first of March of that year.] But indulge me while I frame this little fact, so it gets its true moment in history.

In 1966 the Air Force announced the {allegedly} "Scientific Study of UFOs" at the University of Colorado, as you are all aware. By that time McDonald had come completely out-of-the-closet with his views that this was one of the most important studies Science could be making, and that UFOs were most probably the Mystery of the Century. What many persons don't realize is that some of the founders of SETI weren't far off from that level of interest themselves. For those of you who have heard the SETIans constantly smirk and mock UFOs [overinflated deriders such as Seth Shostak and Jill Tarter are the current attack dogs], this will seem simply unbelievable. We all know that people like Sagan and Frank Drake thought UFOs were a joke. Well, guess again.... 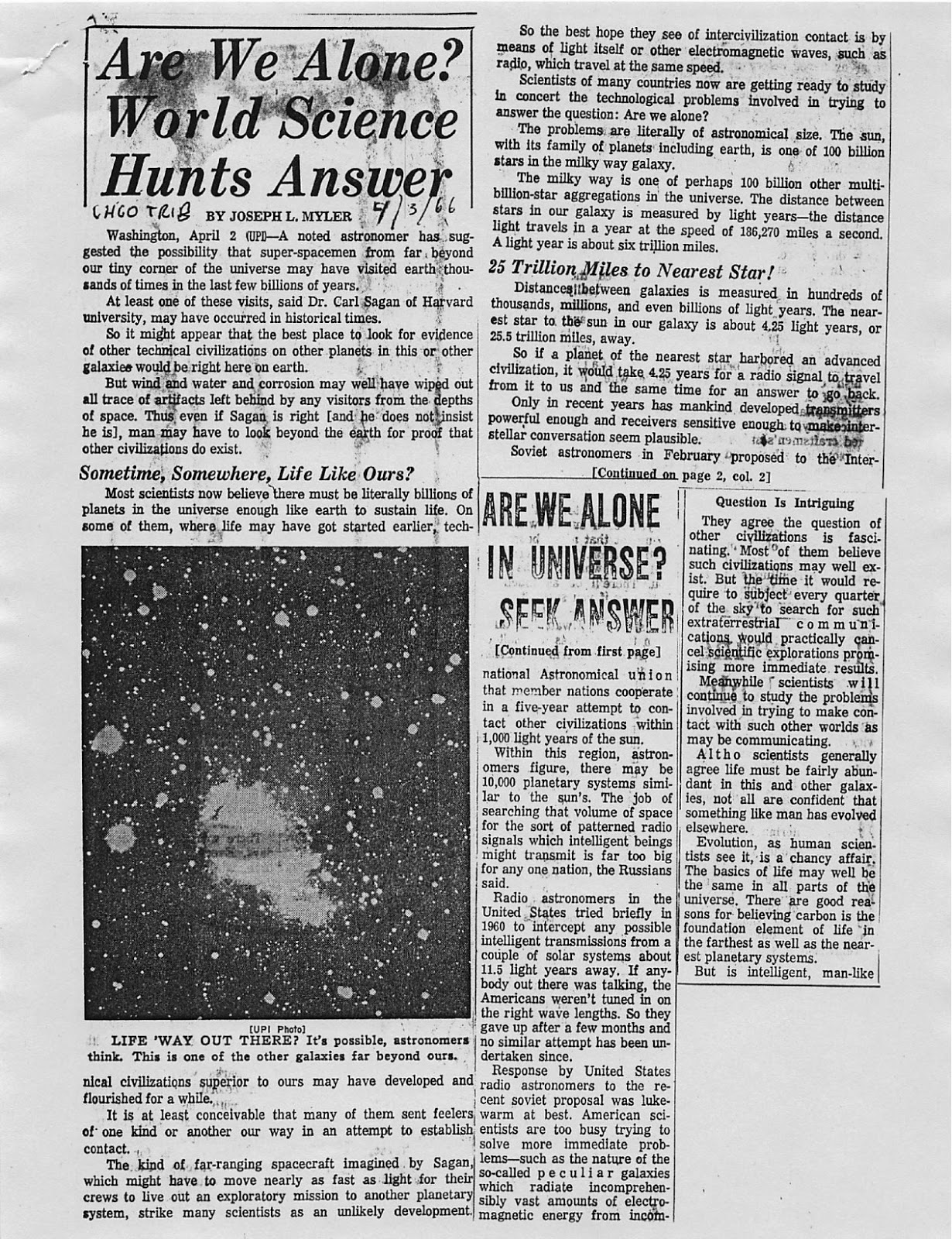 In my "youth" I thought that nothing was more natural than to "like" both SETI and UFOs. How could it not be? Searching for ETI both near and far, what's more obvious? If one listens to what comes out of the mouths of "modern" SETIans, one is, initially at least, boggled. One will not get more brutal comments out of anyone in academe about UFOs than from the pursuers of SETI. But, if one really makes a study of this, this unscientific babble issuing from the public SETIans is far more complicated indeed.

Carl Sagan is easier to read than most. The reason, I believe, is that Sagan was always, even as a very young Tribe Member, a colossal egotist who simply felt that he was smarter than anyone else. This inflated self-assurance gave him a corresponding naiveté about the social dimensions of the scientific tribe. The above press clipping is a concrete example. I have always nicknamed it "Sagan's Error."

Note the year: 1966. UFOs are having a flapping good field day in the American skies, Hynek is screwing up by announcing his "swamp gas" conclusions, and the USAF is looking as bad as it has in many years. Sagan proceeds with his career blissfully unaware of anything associated with the sociology of this. At a science meeting, he joyfully announces that he has estimated the colonization times of alien races expanding throughout the galaxy, and that his math shows that it is likely that aliens have visited Earth 10,000 times in our past, perhaps even historically recently. Naturally no one in the public cared about what anyone else at that meeting had to say about anything.

But it wasn't this up-staging of the great-and-near-great that upset the establishment. Sagan was treading on unacceptable grounds in several ways, and was viewed as a detriment to Science. But, the soon to be announced Colorado Project allowed him to survive his gaff, as until Colorado said differently, UFOs were allowed to be studied. {Once Condon "spoke" however, Sagan would get his "crossing-the-line" butt kicked.} 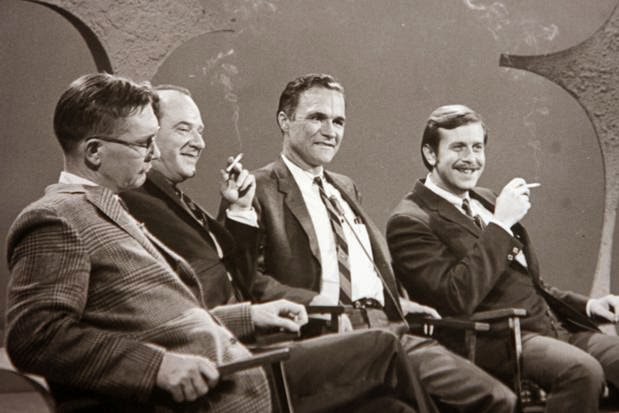 While Colorado lasted, scientists could occasionally be seen actively investigating UFO cases outside the Project and being taken seriously. Of course the famous presence was Jim McDonald of Arizona [seen here on the far left.] But others were appearing from behind the secure protective walls of their universities too. The other three guys in the photo are Philip Seff,  Judson Sanderson, and John Brownfield. Seff was a geologist; Sanderson a mathematician, and another colleague was a chemist. They were studying an incident in Redlands, CA in early 1968. 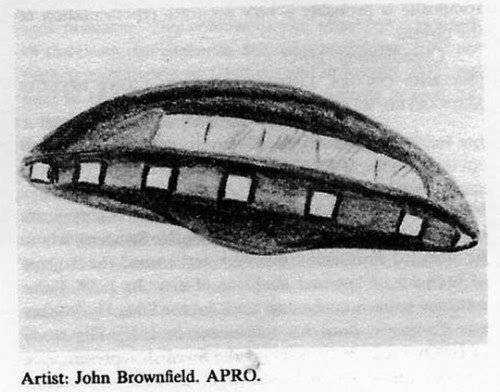 The University of Redlands professors got the Colorado Project to OK their investigation as a sort of extension of the Project, even though it was being done by outside personnel. They were very cautious in the investigation --- reputations to consider after all. But in the end their verdict was markedly "out-of-line" with the establishment. Seff's conclusions said bluntly: no known air technology; no natural phenomenon; this was a "UFO". They sent the report into Colorado, where it was placed in the files but not the study. Occupying very close to the same mental space as Carl Sagan [without the towering ego] was Frank Drake. In the early 1960s he had spearheaded the earliest serious SETI search out of the National Observatory in Greenbank, WV {Project OZMA} and sent the first science-team produced message to the stars [somewhat illegally, much to the displeasure of certain security-minded intel personnel.] In 1961, he developed the famous Drake Equation [he did not name it --- but Sagan later tweaked it VERY slightly so it could be called the Sagan-Drake equation --- we've dumped Carl's name lately as a rare moment of justice and civilized behavior.]

By 1968 he was corresponding to Allen Hynek and listening to Jim McDonald about the travesty which Condon was creating at Colorado. He wrote to Hynek in May 1968: " What I heard in Tucson curled my hair --- never heard anything like it before.... the main participants are going to have to dye their hair, change their names, and vanish." Oh, the naiveté as to whom would have to vanish!

He wrote to the National Academy of Sciences that same month: "with regard to the Condon study, the reports of participants and the discussion in LOOK Magazine show clearly that the study must be discredited, both with regard to scientific quality and with regard to any interpretations that come with it.

"Secondly, I feel that it is clear that a thorough and broad investigation of UFOs is called for. The evidence is overwhelming that there is a real physical and not solely psychological UFO phenomenon.

" In view of the peculiarity of the phenomenon, and the broad public interest in it, there is justification for the expenditure of considerable funds to elucidate it."

Ahem... uhh... not exactly your 21st century SETI commentary on the subject methinks. Unfortunately for dear Frank, he didn't realize that his NAS letter was going to Condon's own favorite student, Frederick Seitz, who thought exactly like his mentor. The letter rapidly was sent onto Ed who blistered Drake. Drake wrote back apologetically, but trying to reach a compromise. Naturally Ed was having none of it and Drake got a black mark next to his name.

Drake tucked his tail and shut up. He still occasionally and very privately went about investigating nearby cases initially around Ithaca, NY [Cornell U.] and later in California. He always denied to curious reporters that he was interested. ... but he was. 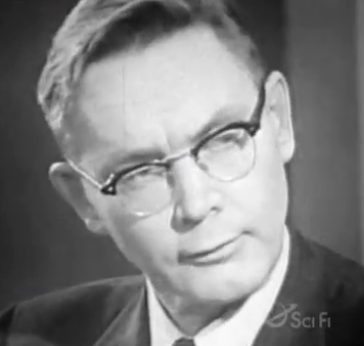 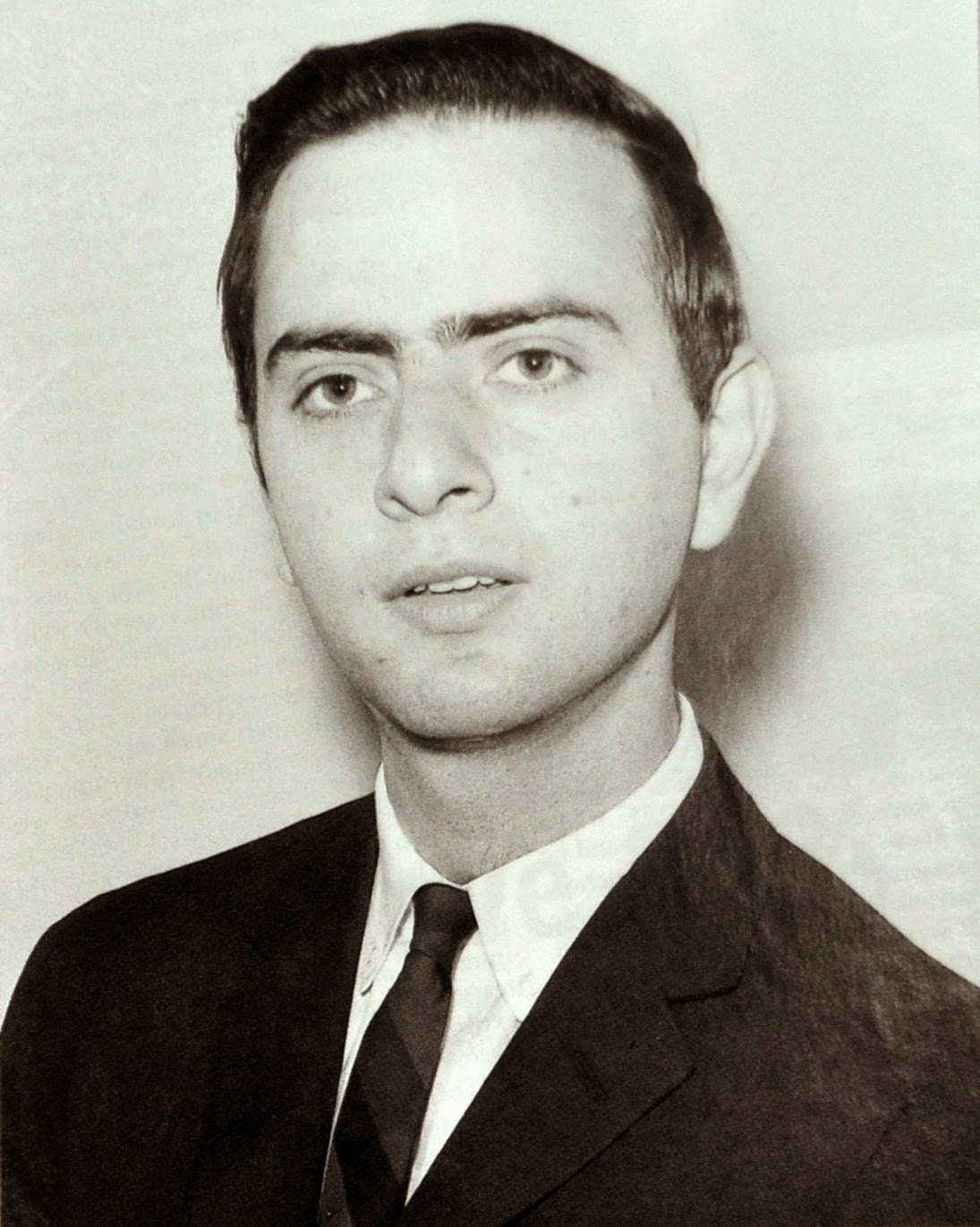 So.... One day in 1967, on his juiced up all-over-the-place-at-once schedule relentlessly pursuing UFO cases and support for researching them, Jim McDonald found himself at a conference focussed upon the atmospheres of Venus and Mars. Many heavy hitters were there. Two of them were Alaister Cameron [middle], who had pulled himself up by his bootstraps scientifically, and was an organizational-type networker as well as a good scientist, and the young, still cocky and largely unbowed, Carl Sagan. It was doubtless an interesting trio to have been grouped with.

McDonald was querying Cameron about where UFO Research might possibly land as a permanent home and funding center. Cameron said : NASA couldn't do it now [The main reason for this should have been severe budget cuts, not anti-UFOism then since Colorado was in high gear..  sort of anyway.] Sagan was listening attentively to this exchange, when he offered something to McDonald that Mack thought worth writing down. 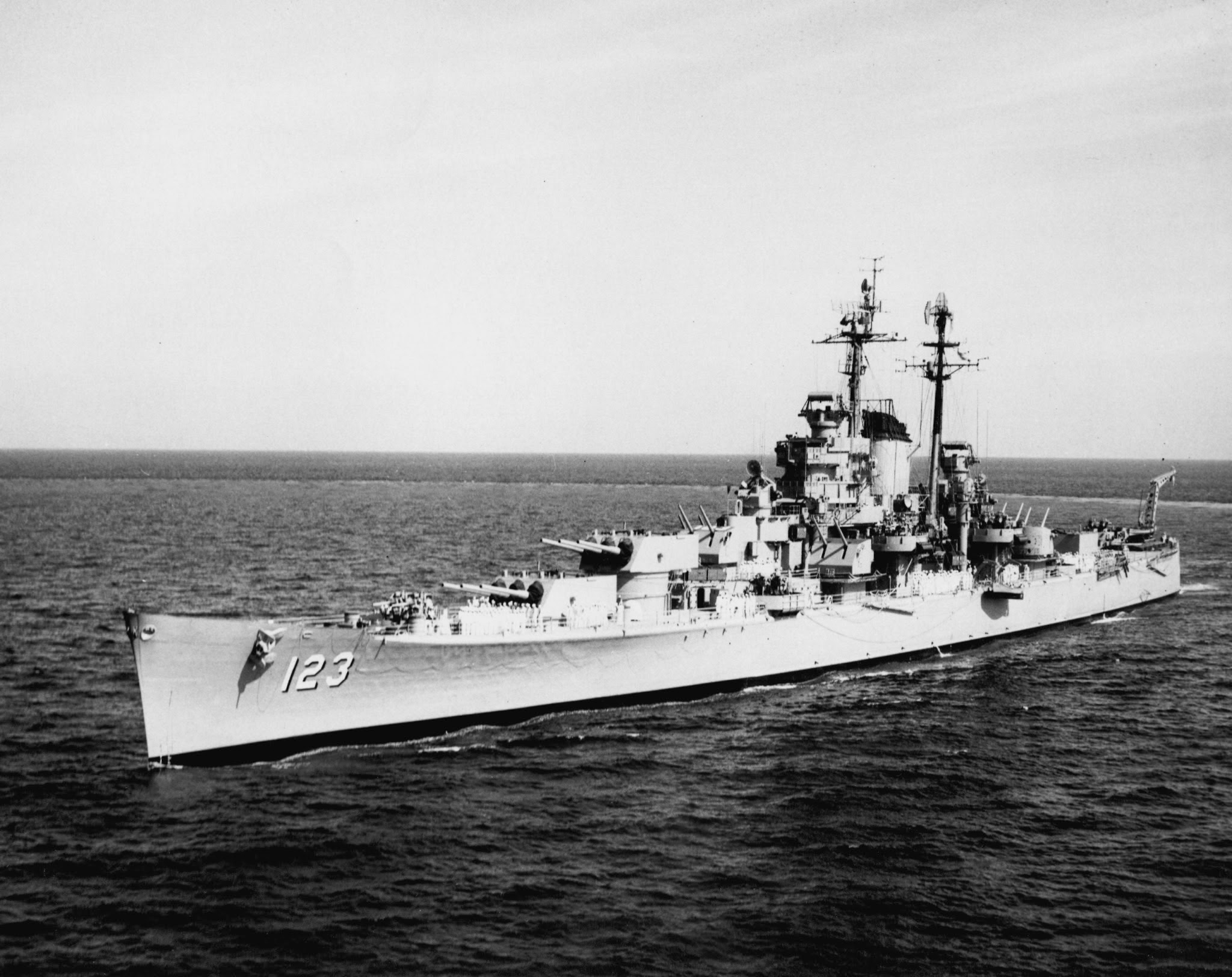 When just out of college, and a member of ROTC, Frank Drake had enrolled in the Navy to pay off his student loans. He stayed in a couple of years, serving on the destroyer USS Albany, on duty in the Atlantic.

At the Mars-Venus conference, Sagan told McDonald and Cameron this:

While on duty in the North Atlantic, Drake witnessed THE EMERGENCE OF A UFO FROM THE WATER from the Albany.

I wonder ... is it conceivable to anyone that such an experience could serve to interest the "Father of SETI" for a lifetime, if only from a safe closet?? [please insert sarcasm and irony tones]. 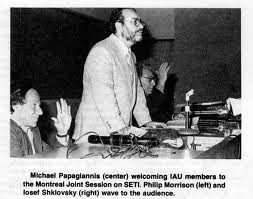 The truth is that all sorts of SETIans have/had a true interest in UFOs. I had the great privilege to attend a workshop on the Odds on ETI run by the wonderful gentleman Dr. Michael Papagiannis from Boston University [himself an editor of a SETI-related journal.] Papagiannis was clearly interested and published his opinion that ETI could easily be in the Solar System currently and living in large space-faring structures in the asteroid belt. [where he suggested we make a genuine research probe to see.]

So why the disconnect?

Two things control almost everything: Money and Fear. The big wheels follow the money. Think about it: if the government spends a ton on UFOs, everybody else suffers. Where's the incentive to be a supporter? Especially if you're in a field where the new guy is directly going to put you out of business. UFO data: thousands. SETI data: zero.

The second thing is fear. If you're not a big wheel, your whole research life depends upon how the wheels view you. Sagan almost got blackballed by the wheels until he finally got in line and began publicly mocking UFOs. I know that this is NOT where the romantic side of him naturally went. For certain it was not where Drake's and Papagiannis' were. 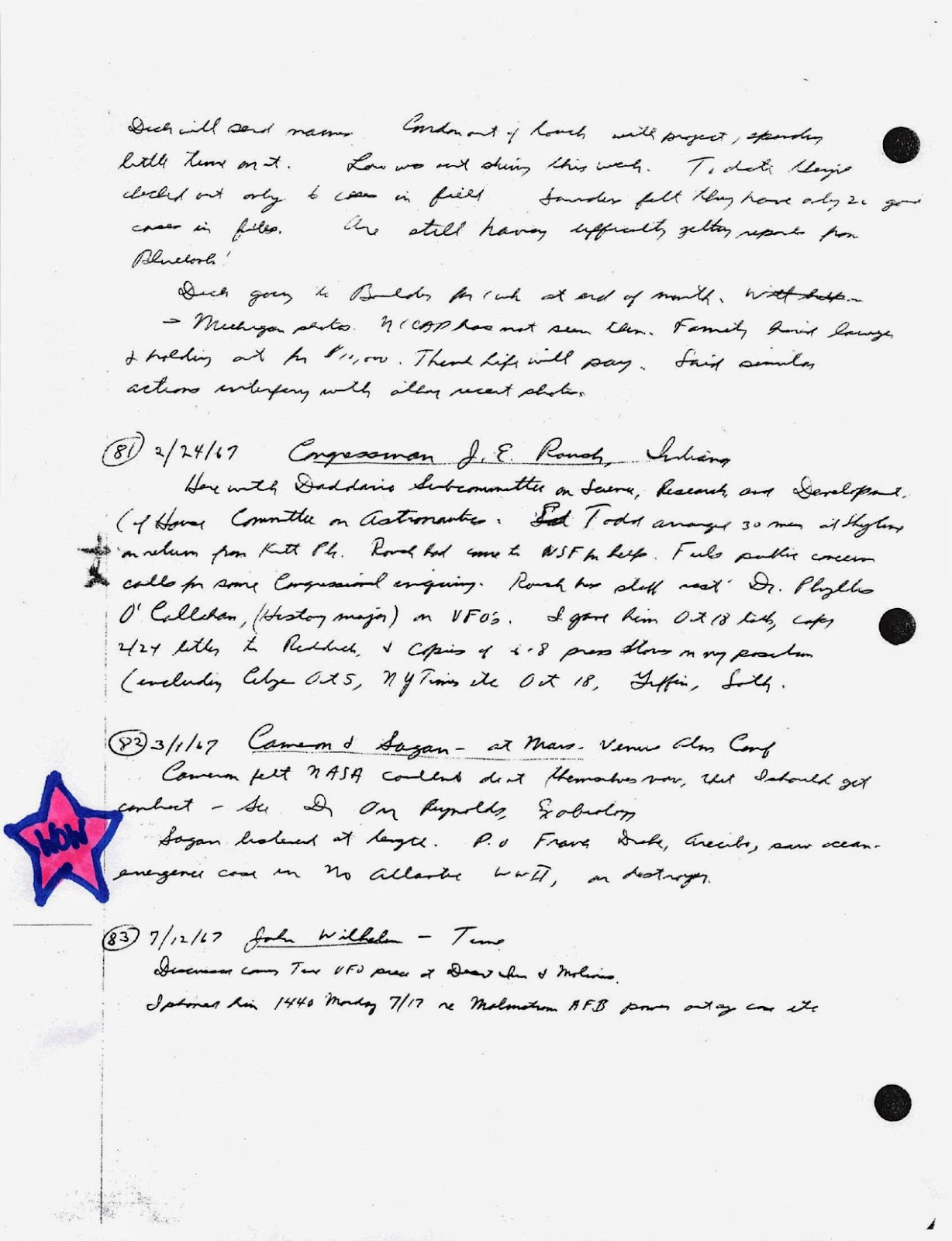 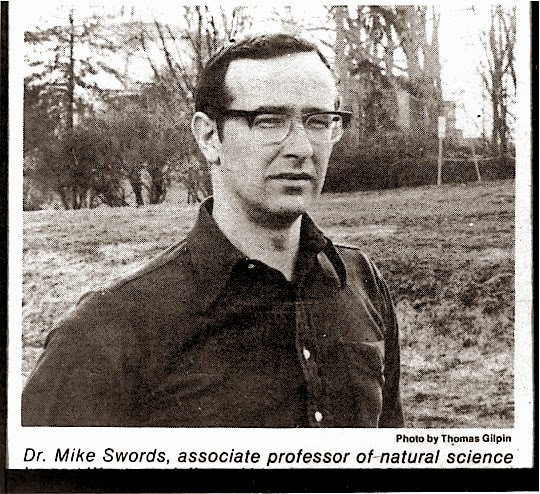 We were all young hot-shots exploring the whole universe with our imaginations once upon a time. Some got so "important" that they had to shut some of the windows onto their souls. Thank the Lord that I never became important.... LOTS more fun and feeling "clean" that way.

God bless and Peace, friends. Keep the pure winds of truth in your sails.