The Ghostly vs Biological Sides of the Central Asian Wildman 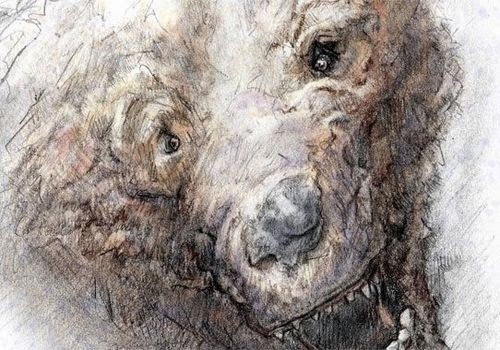 The work of Rinchen and his insightful idea about relating a disappearing ecosystem to the disappearance of the Wild Man, plus the distressing "news" about Tibetan alternative medicine make a case for the biological reality of the creature at least once upon a time, if not now. But there is the whole other side of the experiences which still lingers about the subject --- that many if not most of the encounters [in the end] don't result in anything particularly physical at all [except "footprints-in-the-snow."] To put it another way, the paranormal theory is still out there.

I'll not be able to be a lot of help on this conundrum, but it feels to me that some of the sanest-seeming materials gathered by the Russian Committee have that "ghostly" aura of "you can just about see me can't you?" that passes a bit of a chill over my mind when I contemplate these things. Today I'll report on some more of the things in the monographs which are so familiar to us: that the "thing" seems just there, but just not quite in reach. 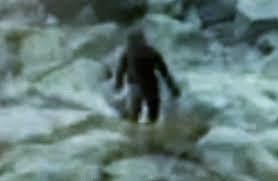 A recurring commentary in these materials [which the Committee wants to ignore, as it is very enthusiastic about finding some crypto-bioform], is that many of the sources feel that the entity is a demon or in our terms some sort of paranormal being. When western-type hunters want to shoot the creature, the local people insisted that they stop --- apparently quite persuasively, as the hunters did so against their predilections. Many of the reports have the herder/peasant meeting the wildman and, naturally, running away, but the reporter insists on remarking that one MUST do this as the wildman is a demon and brings ill fortune. At least half of the stories involving lamas/monks have them running in fear of the demon, or maintaining "relics" [bogusly simulated or not] with serve as respect for these entities. Some of these "relics" are even employed in ceremonies. The lamas cannot be taking these entities lightly.

So what's going on? Shouldn't the lamaseries know what they're talking about? They should be the long-term memories of the region, and the foci for all manner of information. Yet they persist in thinking of the beings as preternatural. Are they just more ignorant than others living in the same locales? That seems to me to be like believing that The Vatican had less knowledge about what was going on in the Italian Alps in the Middle Ages than other people. 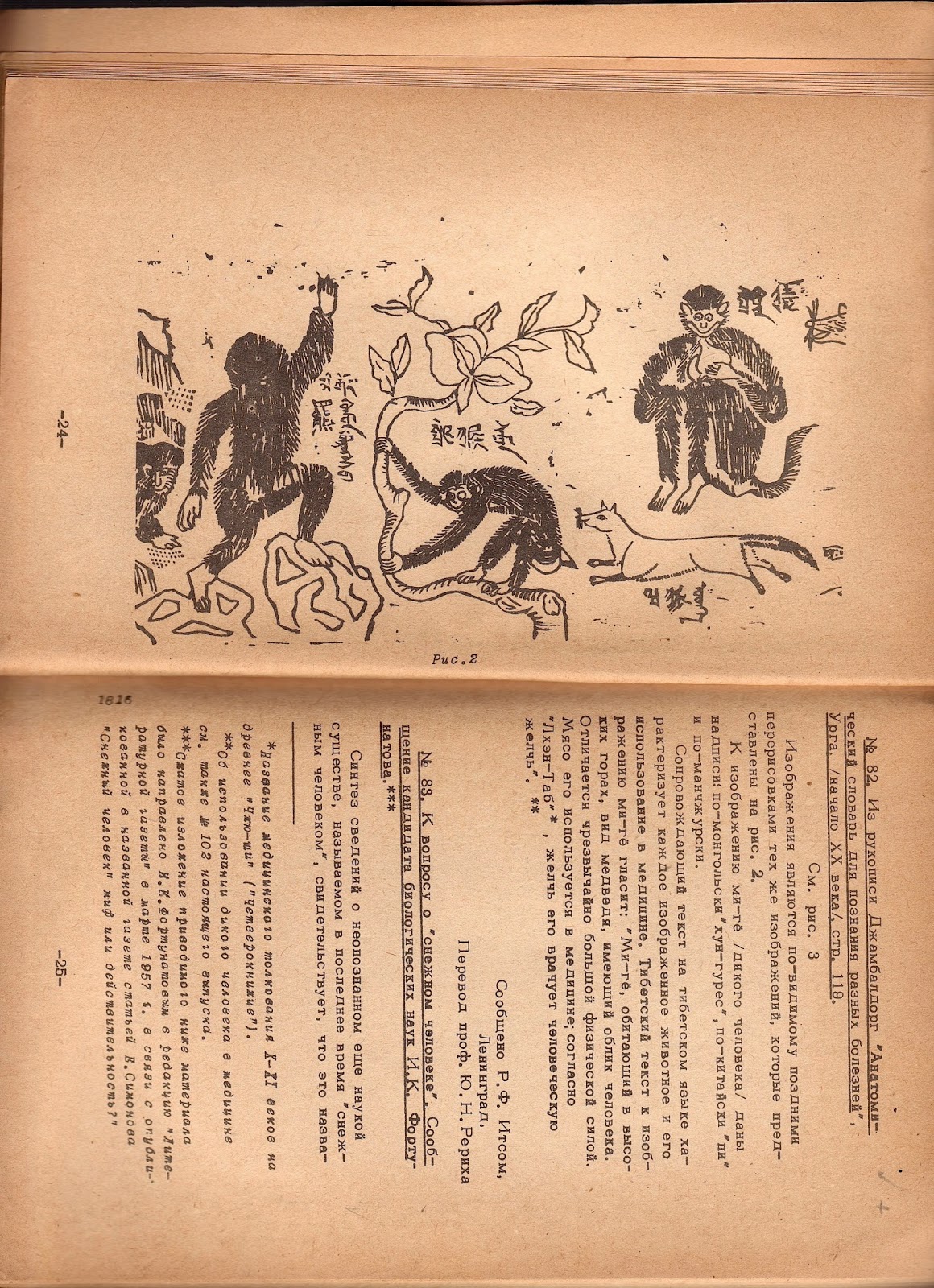 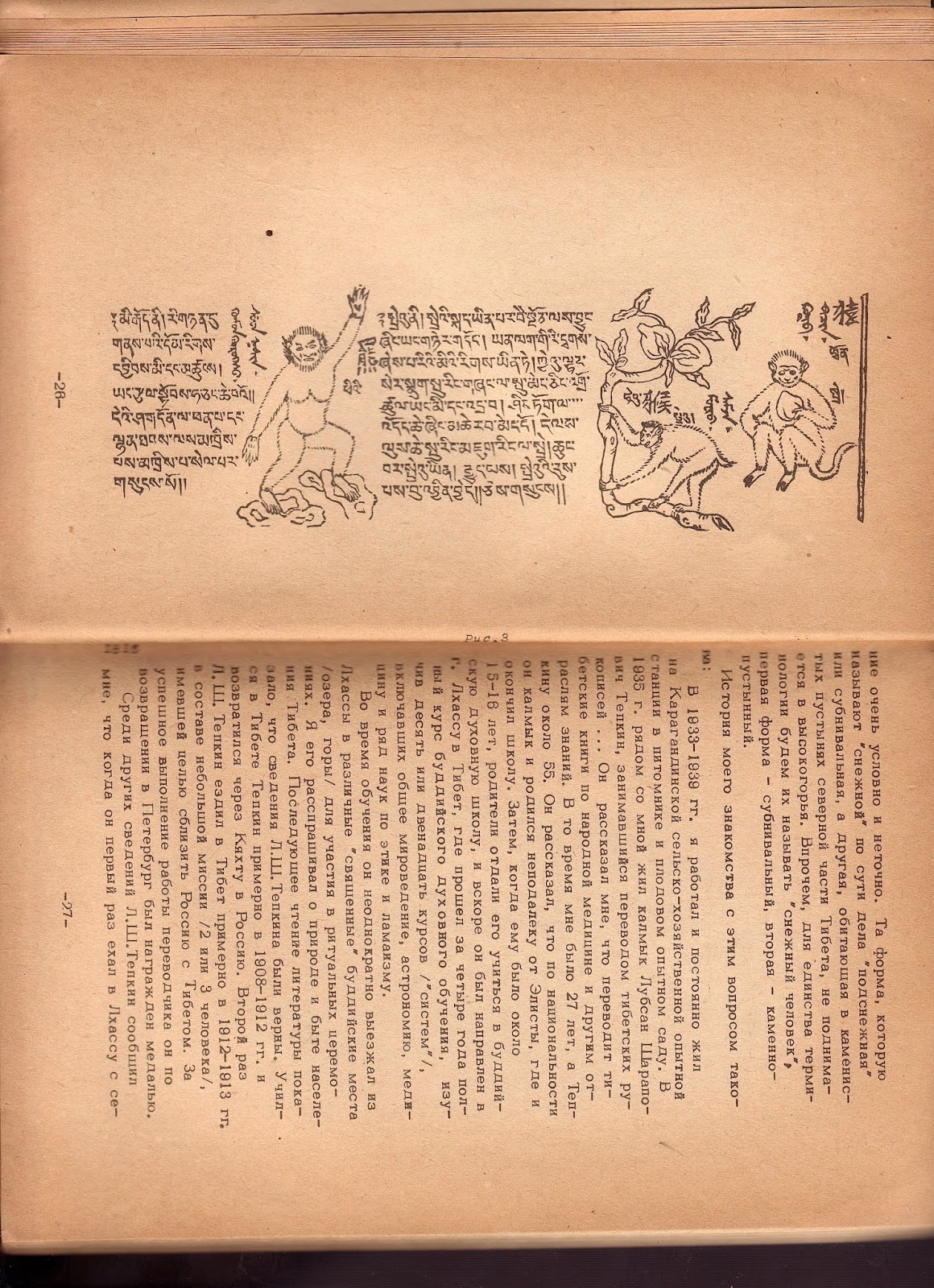 The Russian Committee gathered information about the two books illustrated above. Although I don't note that they mention this, these two documents were uncovered by a research team from Czechoslovakia which visited Mongolia and particularly Ulan Bator in 1958 to study Mongolian anthropology and archaeology. While at the former monastery of Gandan, the team discovered the top illustrated manuscript, and at the central library in Ulan Bator, the bottom one.

The top is originally Tibetan, and with a translation into Chinese. The bottom is in Mongolian with a translation into Manchurian. The bottom is, as best as I can determine from sketchy commentary, a "recent" book, dating perhaps to the early 20th century. The top book is at least one hundred years older. One is obviously the source for the other, and that source is Tibetan.

The text of the entire book [much longer than just the "wildman" pages illustrated] is entitled something  like "Anatomical Dictionary for Recognizing Various Diseases", and is a sort of "natural medicine" book. It is filled with illustrations and descriptors of Tibetan Flora and Fauna, and relates them, sadly, to their use in producing curatives for these diseases.

Although I remain disgusted by the idea, the wildman is described as a source of medical materials. The text which specifies the use of wildman materials is written beside the drawing in the 20th century version. "The wildman lives in the mountains, his origin is close to that of the bear, his body resembles that of a man and he has enormous strength. His meat may be eaten to treat mental diseases and his gall cures jaundice." [This is pretty similar to what books on Tibetan medicine say about Bears today]. Whether this is also stated somewhere in the older Tibetan version, I don't know. One assumes that something of the sort must be there somewhere.

But I'm puzzled by a whole number of things here. The Tibetan version pictures the wildman ["mi rgod"][ could be related to "mi-ge" as we've heard before] with some significant difference to the Mongolian. The Tibetan is black/dark not white/light and is very much more ape or even bear like. Though both are posed anthropomorphically, for some reason the later Mongolian version has chosen to make its "kumun goregesu" much more facially human. None of the later manuscript's facial features appear in the Tibetan original.

I don't know what to make of this. As a historian, I trust the primary manuscript over the secondary. If so, what is it telling us? Maybe that the wildman is more ape or bear or unknown like than the near-man of the Mongolian. One could see why the authors of a medicinal text would feel more comfortable slaughtering a bear-like or an ape-like animal than a human-like one.

But, if this seems to push the definition more towards the cryptobiological animal concept, what explains all the folkloric and "theological" stuff? We need a Tibetan scholar that's for sure. For me this is driving me to the concept of two wildly different opinions about Mi-Ge/ Gul-biavan/Yeti in Tibet. 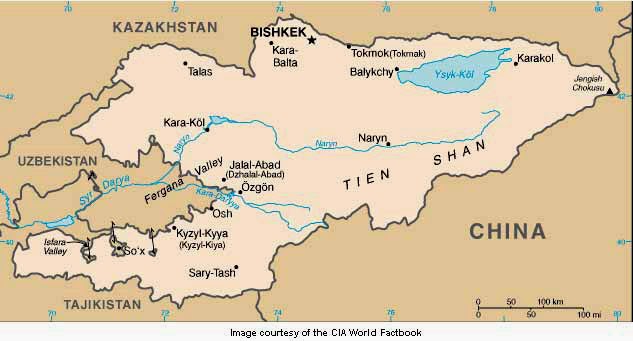 This is a big place rife with tales collected all over it. Rinchen's interest areas are mainly in the area shown, but the southwestern China mountains and rhododendron forests and the edge of the Himalayas don't even make it on the map. Can we have Almas in the regions above, and in the rhododendron forests they or some other cryptobio-beings? And can we at the same time have the Mi-Ge paranormal entity that the lamaseries of the Himalayas are so concerned about? Do the two [or three?] mysteries flow together in migrating stories all over the region, making their unraveling nearly impossible? 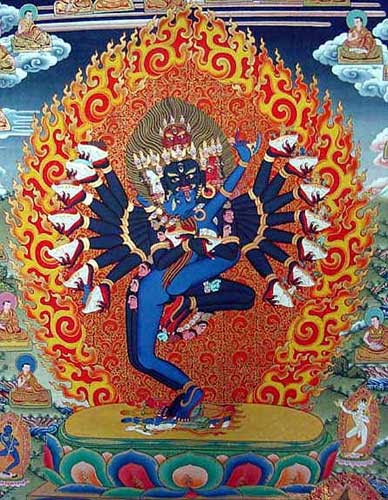 I'd like to mention one other thing. It is probably irrelevant but who knows? The Tibetan illustration for the Wildman chooses to pose the entity in a way which seems a little surprising to me. I get the upright stance, but I don't see why one would bother with the high-held left arm. Unless maybe it's originally meant to be symbolic.

Tibetan illustrations are extremely symbolic in how they portray limbs placement. What you find is that the left arm is rarely raised --- I don't know why, surely Tibetan scholars do. In the rare cases of a raised left arm, the entity is usually either threatening something or in one case I found up to no good. If the original picture of the Wildman used by the Tibetan medical book writer was in fact a Tantric illustration of a powerful spiritual being [which the later writer ignored because he was of a differing school of thought about Mi-Ge] then illustrating the Mi-Ge in this stance was merely copying "old knowledge", but with none of the original intent to convey the spirit meaning. 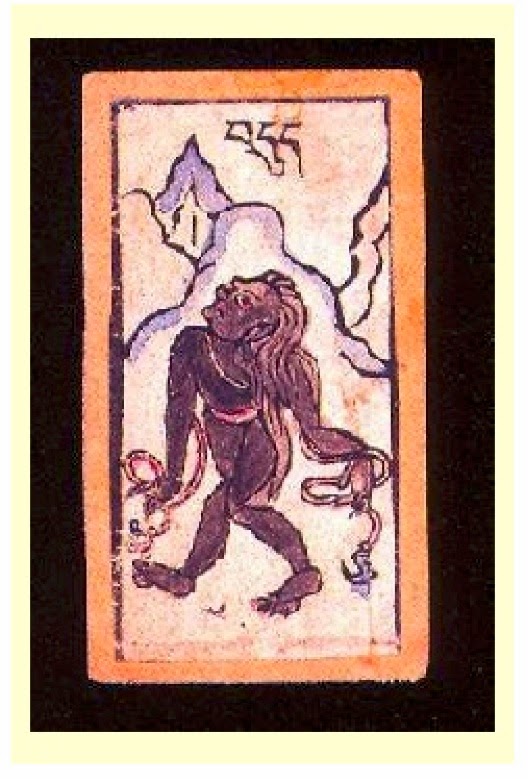 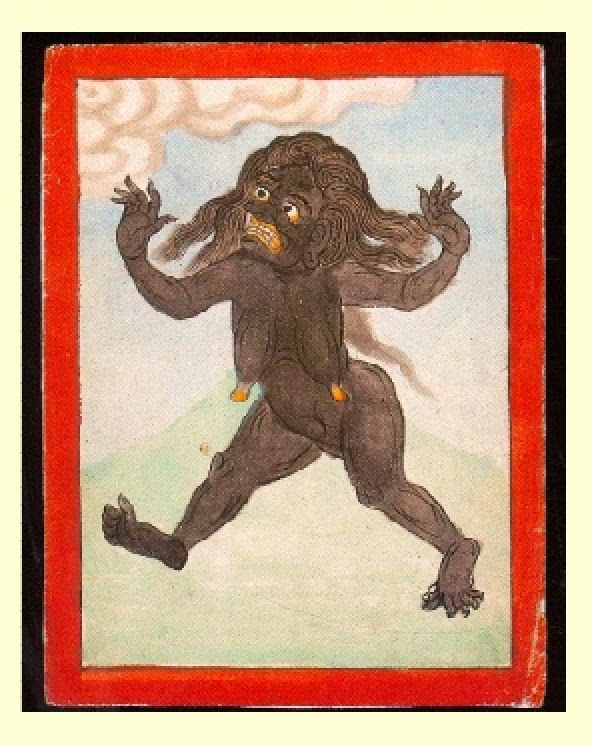 As I say, perhaps this means nothing. But there is plenty of room in Tibetan thought for wild humanoid form demon entities wandering the mountains and forests. "Bdud" [top] and "Ma-Mo" [bottom] are folks that I have no desire to run into.

For all my reading in these Russian documents, I, for what little this is worth, come away with two fairly strong impressions: 1). Rinchen and a slightly earlier Russian had a brilliant idea that one could correlate more convincing wild man tales with the inclusion within them of mentions of primitive horses and camels --- thus pointing to a signature ecology within which this creature [perhaps the "Almas-style version" of these things] might have existed; and 2). that the most realistic "evidence" for me have been the tales by observant hunter/explorers who speak of mysterious footprints not matching the known, and unidentifiable sounds in the night, and distant shadowy figures naked and hair-covered but uncatchable.

Rinchen makes me believe in the animal. The explorers make me lean back to the spirit entity. So, yes, as usual, the mystery remains robust. 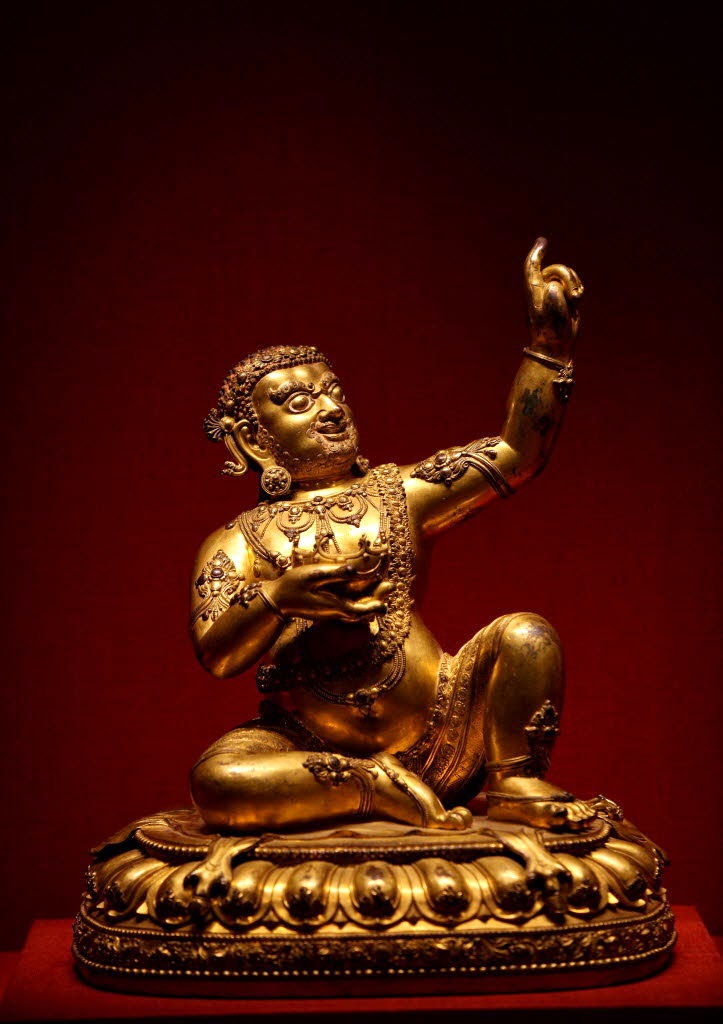 I'll leave you with this guy with the forbidding raised left arm: he's using his formidable power to hold back the Sun in order to not pay his bar bill --- I kid not. Seems like an abuse of power to me.

Peace friends --- hope you had a Happy St. Pat's and paid your bar bill.