Down in the Cryptodumps, part four: Stuff Flying Around With Wings. 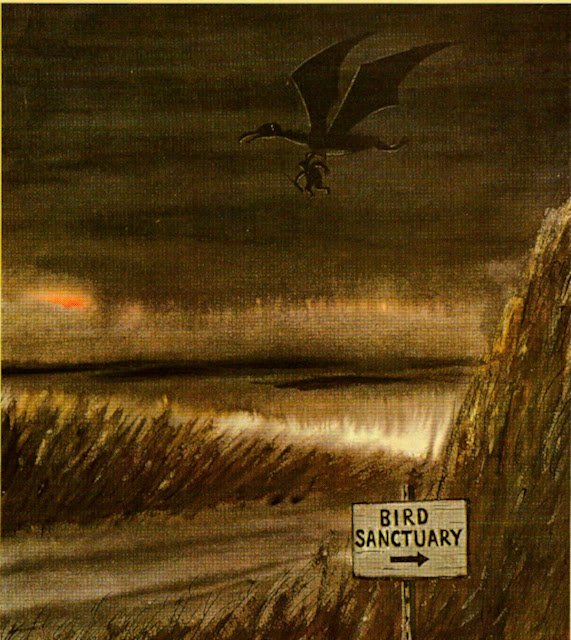 Back to the Cryptozoology Dump Box from the SITU collection that I was once perusing and making copies for filing, which never took place [panic not, readers, all the originals DID get back in Ivan's files.] My Fortean Heart is pure and my finger tips not sticky.

Today: weird stuff flying about not related to UFOs. 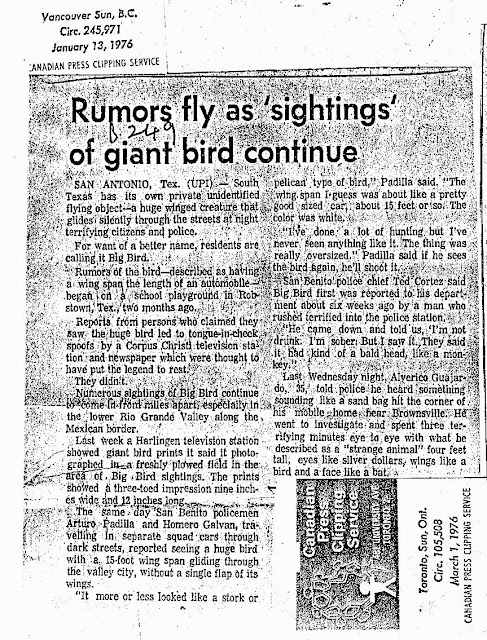 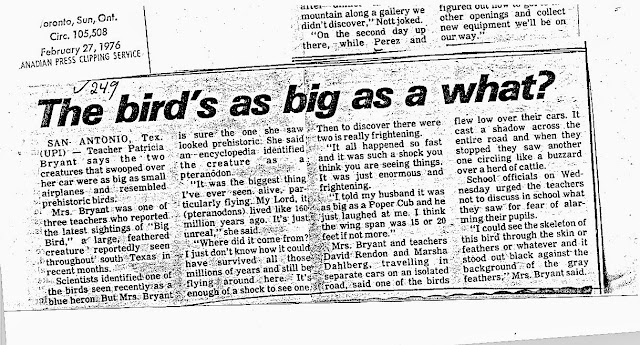 c.1976 News accounts were coming out of Texas of a very big bird seen. SITU received several clippings. Ivan had already passed away, but he would have been interested [as I'll show you later]. The Texas sightings reported seeing a flying animal around 15-20 feet in wingspan. The majority of the sightings were along the Rio Grande on both the US and Mexican sides.

Perhaps the human mind was playing jokes or perhaps The Universe was, but earlier in 1975 palaeontologists discovered, in Texas, the largest fossil pterosaur ever found. The beast had a wingspan of nearly fifty feet, and its skeleton challenged science to tell how it could even get off the ground. The "Texas Pterosaur" seemed a ripe candidate for inspiring goofy Texas sightings.

The hitch in that hypothesis was that not all the witnesses could easily be written off as goofs. One sighting was by three k-12 teachers and another by two policemen. Both "birds" were about one third the size of the Texas Pterosaur. 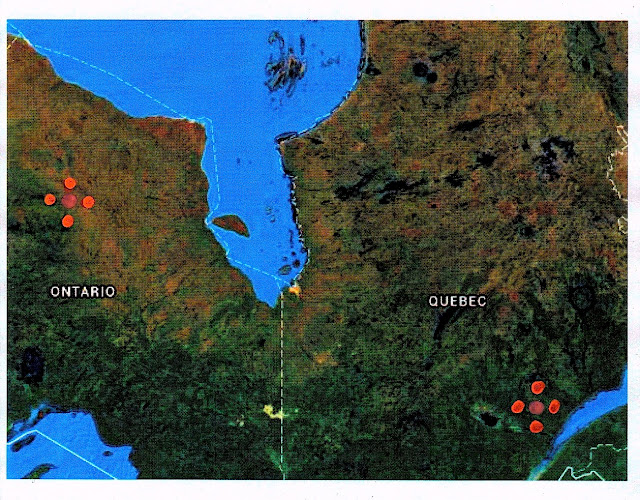 A letter in the files from the same time came from a researcher looking into cryptozoological mysteries in Eastern Canada. He referred to thunderbird sightings from two areas, approximately as marked on the map above. The Quebec [Laurentian-area] information was from a trip that he had taken in 1975. A Quebecair pilot told him that his plane had been buzzed by a bird of approximately 25' wingspan as he was flying over the Laurentians in 1972. Another man told the correspondent that he had seen a similar bird in the same area in 1969. 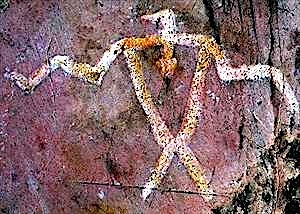 The Northern Ontario information came from a woman researching Ojibwe legends of the Thunderbird. The Thunderbird is a primary Nature Force/Deity/Manitou of the Peoples of the Ojibwe/Chippewa. The old pictoglyph above is from the Jeffers Minnesota park. This lady said that during her interviews several Native Americans of the area told her that they had seen the Thunderbird nests in Northern Ontario. 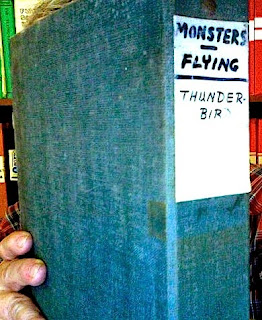 Sanderson would have been interested in all this 1975-6 input had he lived. He had a fairly extensive resource notebook on the topic. When you glance through this thing, you notice that Ivan had some favorite bits which sort-of hooked him. 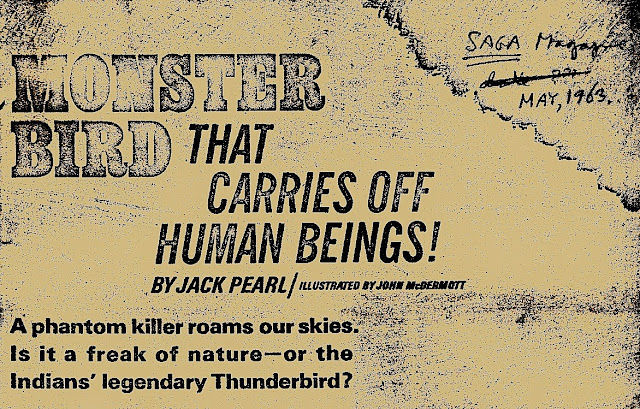 Though not buying everything that he read in this article, much of the thing [minus the tone] intrigued him. 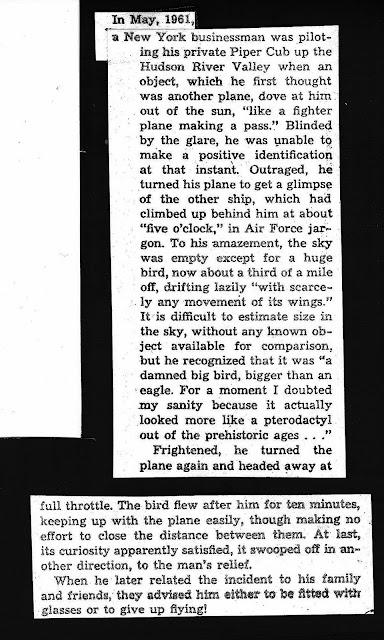 One case that he liked has been repeated many times. You can read it above. But he also said that to get the gist of the subject, readers should read the entirety of Pearl's article. 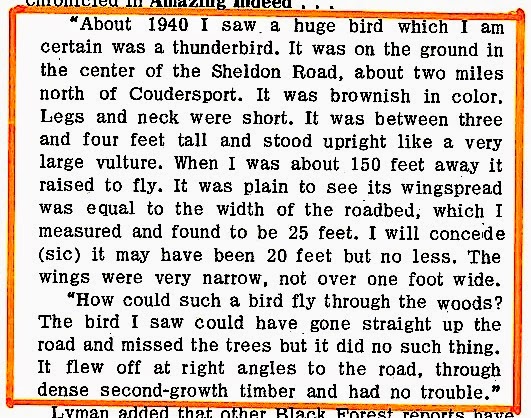 Another case, which Ivan might not have seen, appeared in PURSUIT after his death in an article by Curt Sutherly. Sutherly was intellectually "congenial" to both Pterodactyls and Thunderbirds, but informed us in the article that they were two utterly different things: Pterodactyls were physically/biologically real animals of the past, which possibly could have lasted into prehistoric-humans' times but are now extinct, and Thunderbirds were "monsters popping in and out of our reality", semi-real parodies of physical/biological things, that he wished to call "para-creatures". 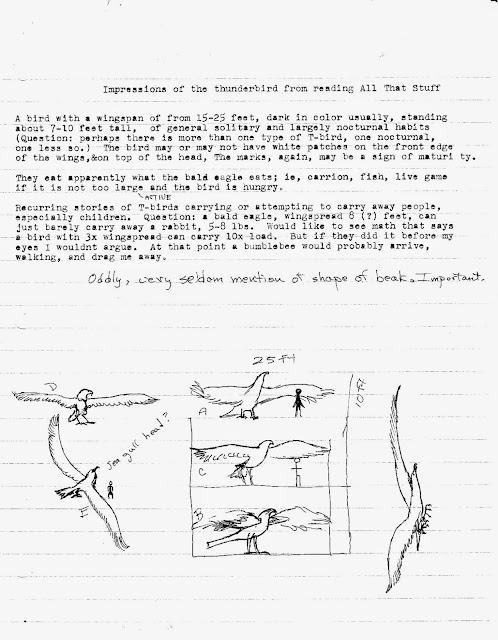 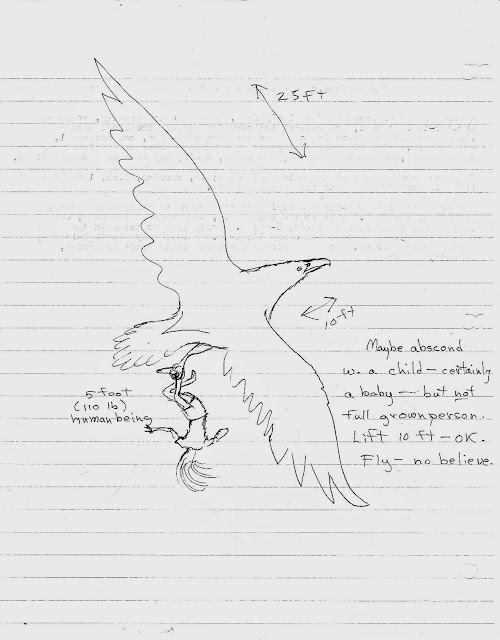 Ivan wouldn't have liked Sutherly's conclusions [though I would] {The above are Ivan's notes} .

Ivan didn't like non-physical things in general. He was a hands-on and in the lab [or the zoo] kind of guy. He'd MUCH prefer a still existent pterosaur AND an unknown really big raptor of some kind to any other set of choices. For Sutherly, the Ojibwe, and myself, the Thunderbird as a "Real" Manitou is quite the most compelling of the hypothetical sets. 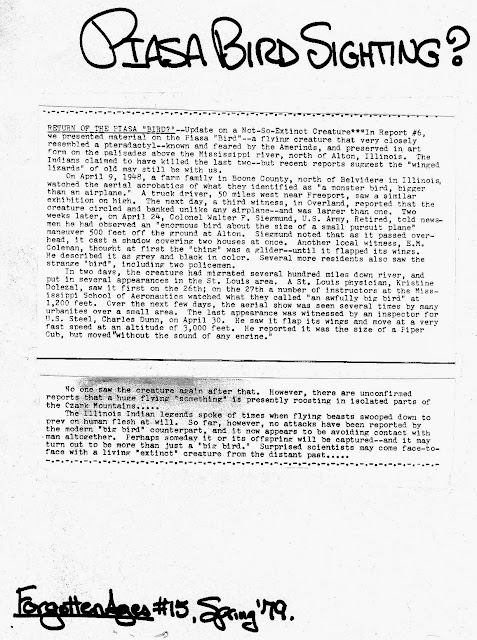 This was in a large box of things sent to SITU from Joan Whritenhour's organization after her passing. A good bit of that stuff wasn't too interesting, but the organization had some "odd" contacts that SITU didn't have. Occasionally a mention of something would occur in a letter or newsclipping that was right down SITUs alley. As you can read, the report is of a "monster bird" in the vicinity of Belvidere, IL which is close enough to be called Piasa Bird Territory. In 1948 there was a flurry of sightings in that area all the way down river towards St. Louis. 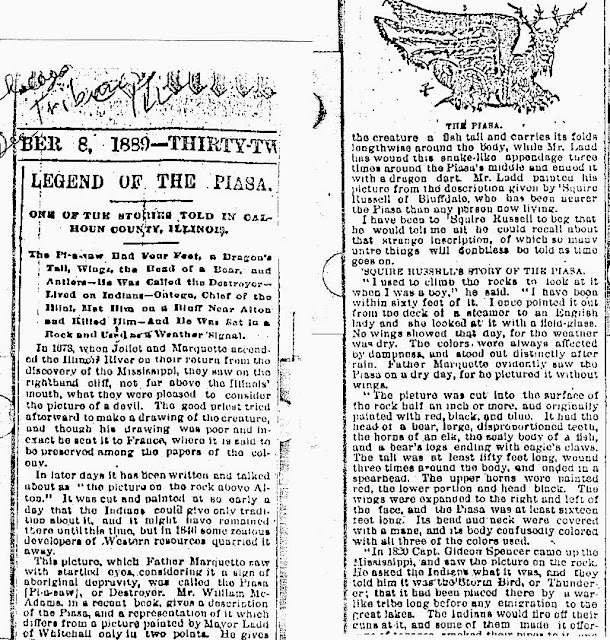 I'm a fan of the idea of the Piasa Bird. It's one of those cryptozoological mysteries which has a long but solid provenance thoroughly attached to Native American lore. There were two other Piasa Bird references in this cryptobox: One was a FATE magazine article that I didn't think much of, and the other was the oldtime article above. This latter was one of Ivan's articles --- he had a little group of photocopies of 19th century newsclips that he was apparently once reading.

The 1889 clip above is quite enthusiastic for the possibility of a real Piasa. It is based upon knowledge by someone who was a scholar and serious about finding out about the painting on the hillside. It comes at a time just after one of the great collectors of information about American pictographs had published his work. The writer knew of McAdams' book on the Relics of Ancient Races as well as having talked to one of the most important informants of the time, John Russell. The writer also may have talked to the pictograph collector, or maybe it was he himself doing the writing. 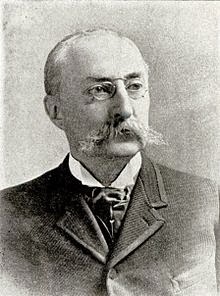 Here's our pictograph hero, Garrick Mallery. Preserving the designs of the ancient Native American pictographs was his avocation and his passion. He ended up creation an 8oo page manuscript of his work. Within that work he mentions the Piasa Bird.

So what's that all about? The FATE magazine article stated that the Piasa Bird had no wings. It intimated that we probably had no idea what the thing was like at all because the glyph was so degraded by the time anybody looked. But I disagree and I think that Garrick Mallery and John Russell disagree. There is a statement by some early viewer that the "Bird" was a crudely drawn monster with no wings. FATE takes that as the definitive reference. But Russell [I believe] states that because of the brown-red color of the wings, you will have a hard time seeing them from a distance and in less than good lighting conditions. Then, as what is for me the coup de grace, Mallery publishes this in his monograph: 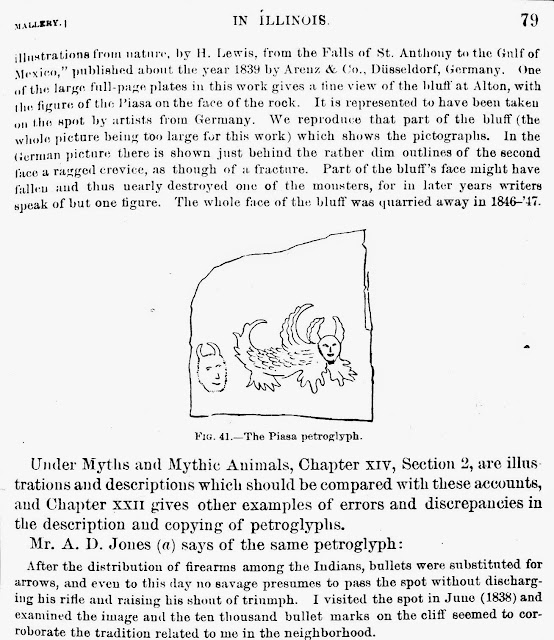 Our favorite Mississippi Flying Monster could fly by wing after all.

Why do I care? Well, it's a small matter in the larger business of living one's life, admittedly, but having a winged Piasa makes several things "fit" and others maybe possible. The "fit" is with the Native American legends, even those told way back to Marquette and Joliet. It "fits" with the idea of the powerful spirits or Manitous that we've talked about earlier. It "fits" with the dislike that the modern Native Americans had for that particular dangerous-in-their-stories manifestation, so much so that they fired guns at the image once firearms arrived.

And, the Piasa Bird, unlike almost all other old images anywhere, is pretty close to a "proper" British-style Dragon [if it has wings]. As longtime readers of this blog know, we searched [some time ago] rather intensely trying to find a proper dragon anywhere, and, with the possible exception of "Beowulf's Bane" {not Grendel but the other thing, that killed him}, came up almost empty.

With wings our Piasa Bird remains a rare candidate for an ancient romantic concept. 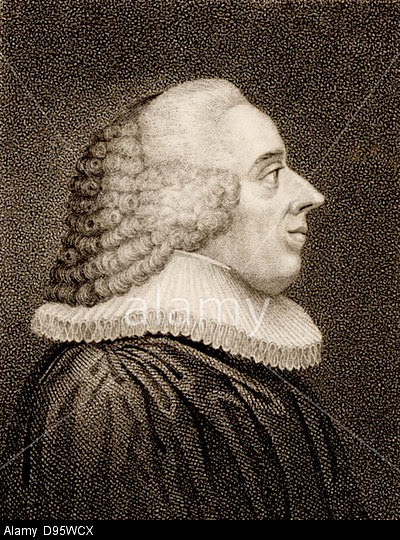 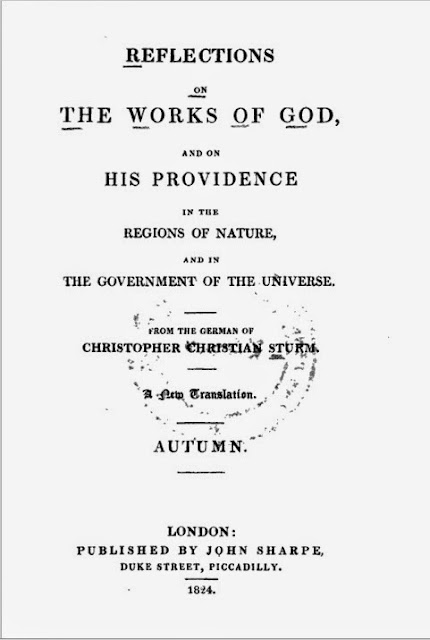 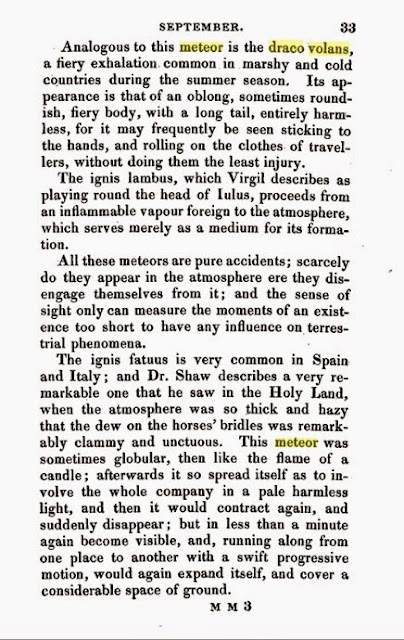 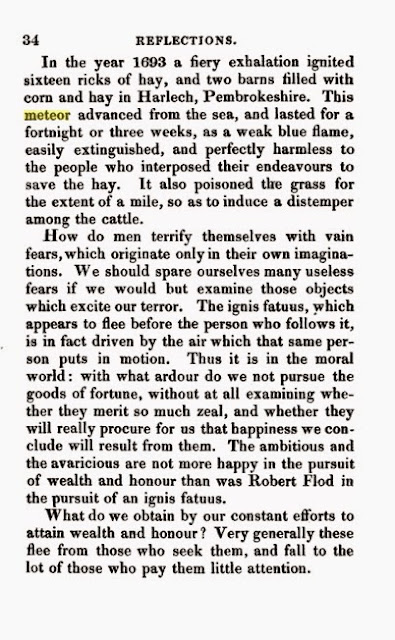 Sadly, Mr. Sturm's flying dragons turn out to be Swamp Gas. The irony of that staggers me.

I DO notice, however, that "swamp gas" seems a little insubstantial to deal with all the things that Sturm mentions --- it seems that the "sophisticated" English doubters were busily substituting one anomaly for another. But dragonless still am I. 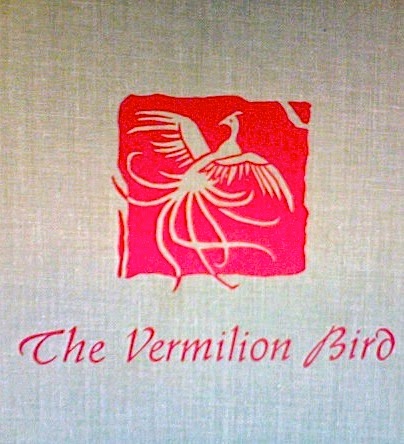 Ivan had the book above in his SITU library --- I don't have any means of knowing if he read it. It contains things about Vietnamese animals so he may have. It was one of those items which was marginal at best to any interest that SITU would have, and I considered passing it on to someone else. But first I wondered what "Vermilion Bird" meant. 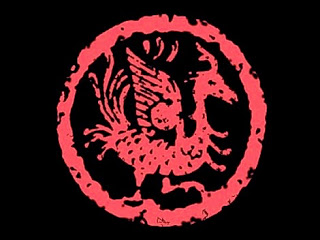 The Vermilion Bird is a deity or Nature Power --- the Phoenix. In some renditions it looked pretty dragonish to me. 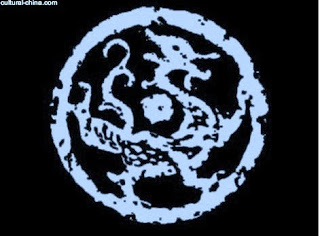 In Chinese mythology it is one of the four directional powers, one of which is the Azure Dragon. So, my Vermilion Bird seems to be no Dragon either. 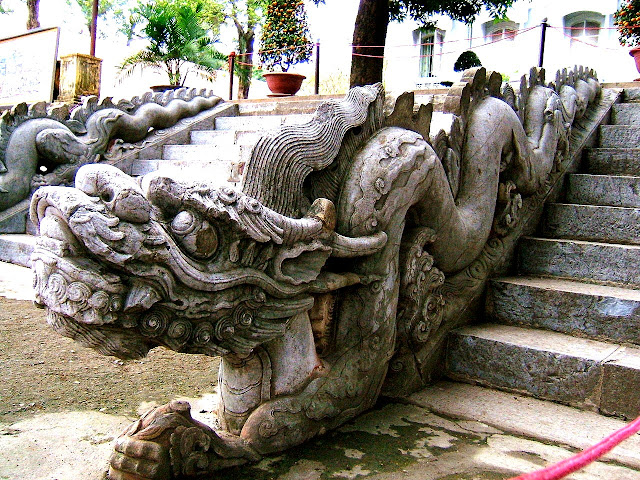 But the Vietnamese had other ideas. In their view, and especially before the Chinese influence thoroughly took over [we're talking mediaeval times here, not recently], these images of powerful significant Spirits sort of melded together. The important Spirit was the Kua, or water dragon, who mated with a goddess/fairy queen to produce the warrior dynasties of early Vietnam. 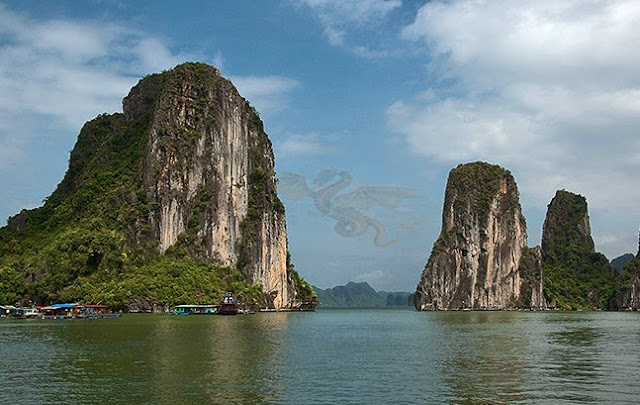 The stories say that these dragons lived offshore in places like Ha Long Bay even until recent times. What did they look like? 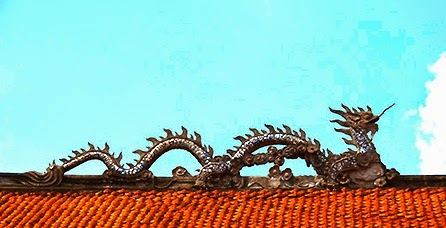 Till next time, Peace.