Close Encounters of the First Kind: Do we really care? 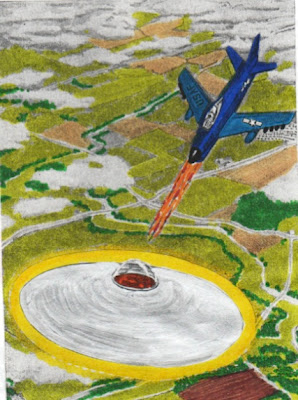 A little look at some CE1s--- but first: "Excuses, Excuses." The blog's been mainly dormant for several weeks for some "good" and some not-so-good reasons. My mother's care continues to occupy a lot of time, and a lot of energy. Currently I'm getting a "month-off", thus finally this posting. Secondly, the big UFOs and the Government book is in the final polishing, has been in the majority seen by the publisher, and is being read by the author who will write the foreword. In other words, such stress is about to float downstream. SITU is actually at the point where I can build the final interior shelving units in the garage, and begin shelving books and journals according to category. There is some psychological relief in that, and such relief aids in the day-to-day "optimism" which is necessary to do research and contribute to blogs. So, life is still not that of an irresponsible playboy, but just enough relaxation of issues is occurring to make a few occasional blog entries more likely.
So, to the material-of-the-day: this comes from my freedom to attempt straightening out my files which had gotten out-of-hand due to problems one and two above. I had probably 200-300 cases to log and file; that's how far behind things had become. Once I finished, I thought: is there something here relatively mindless that can be done which would be amusing? For reasons unknown, I pulled out the files from the CE1 drawer and began to idly page into them. The interest arose as I saw that, although in the minority, there were quite a few files wherein the witness had sketched a craft [or someone else did, but had gotten witness approval]. So, I began plucking them out, and here they are. [I've more than this first page --- waiting with the rest until later is good strategy, I think]. 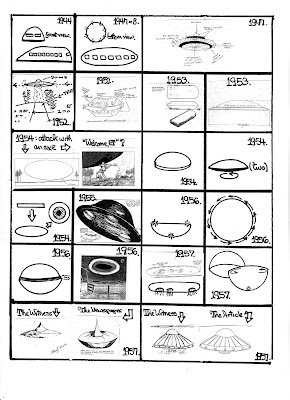 Here are twenty-one case drawings from the WW2 to 1957 era. It's interesting, I think, for anyone to just look at the array for a minute without me gabbling away making noise about them. 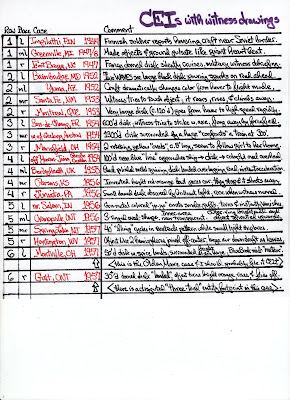 And here are the thumbnail case details for the sketches above. Hopefully you will be able to pop this graph up and magnify it if necessary; there are a lot of pixels in it. 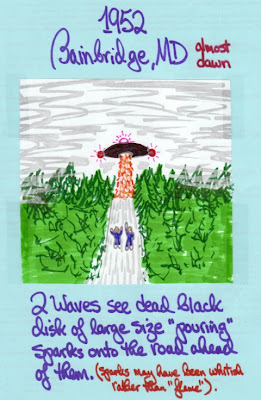 I'm not sure what to begin to say. I'll be bonehead obvious to start. UFOs don't look alike. They especially don't look alike if they are anything but smooth featureless globes or disks, or cigars or ovals. As soon as you get features, then the simple description of a "UFO" goes out the window.
For those of you who have been around the subject for a long time, you know that this is one of the great and frustrating enigmas about the phenomenon. Why don't the darn things look more like they came off a high-tech assembly line? People will try to say that they all look like they are in a general class of shapes ["radial symmetry" would be the fancy talk], but even that isn't really true. They rarely look alike; they rarely are the same size or color; they rarely behave alike; --- even giving them the benefit of somehow "seeming" alike [some good percentage of them anyway], they are far from Model T Fords a la Henry's mass production concepts.
There are UFOlogists who dislike this very much. I used to be that way. Now I've done a "180". The fact that everyday Janes and Joes do NOT describe some fixed image "flying saucer" gives me a significant boost towards the credibility of the reports. Arrays like that pictured above show [to me] conclusively that the media does not control UFO report content, and probably controls nothing about UFOs at all.
Let's leave the general comments with that for now, and say something about a few of the specific cases. 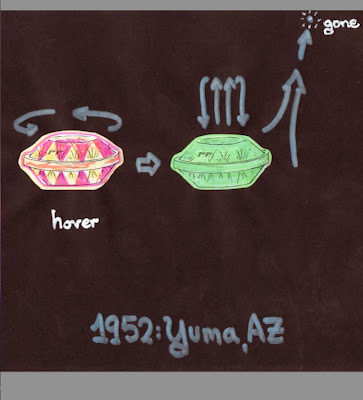 The drawing way at the top was one of Edward Ruppelt's favorite cases, and it has become one of mine as well --- whether it happened or not. This was the "shooting" incident which he was told about on one of his trips to Holloman AFB. An officer there told him that a pilot had fired his weapons at a UFO [VERY controversial thing to do] and even showed Ruppelt the incident report WHICH THE OFFICER PROMPTLY BURNED!!! Ruppelt was thoroughly boggled by this, BUT HE BELIEVED IT. We know that he believed it because he presented this incident prominently before the CIA investigation panel [The Robertson Panel]. Could we have actually had a USAF/UFO shooting incident in late 1951?
The next drawing down is my colored up version of the little sketch in the witness drawing panels. It's the 1952 Bainbridge, MD case where two women naval officers saw a large black disk hovering over the roadway which they were walking and spectacularly "pouring" sparks like a liquid fall down onto that road. This two-witness case has the necessary high credibility AND high-strangeness to make it one of my favorite "hidden" encounters.
The incident pictured just above [again my colored-up version of the witness sketch] is the Yuma, AZ case of 1952, and is another little-known report. The case has a very detail-oriented observer, picturing a rather unique craft, and with an intelligent credible report [there were allegedly two military observers to this but, as usual, the second wasn't around for an interview]. My favorite detail was that the object produced a distinctly different color-pattern when it decided to take off, from that which it displayed while hovering.
The case at the bottom is a 1954 case from the Pacific Ocean, off Yaron-Jima Island. In this incident, the crew of the ship saw a very bright neon-blue object approach, looking only like a line of blue in the distance, but a disk when close. When directly overhead it appeared to have a thick red-colored ring surrounding a black center on its underside. The thing was quite large, perhaps one hundred feet in diameter. 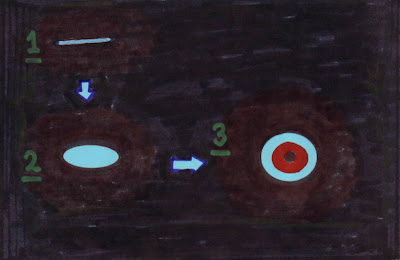 I'm going to leave off at this point. I'll try to get another set up tomorrow or soon, with some further commentary. Until then, Happy Valentine's Day.
Posted by The Professor at 12:35 PM