The Druids: What Could They Do? 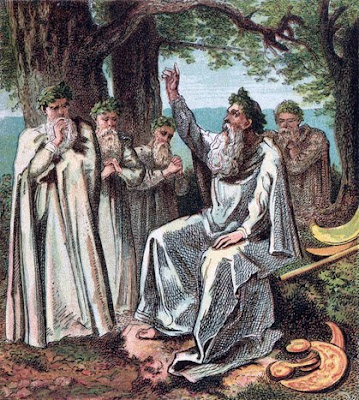 This blog entry will be more of a Taoist Walk [i.e. an organic meander rather than a strict linearity] largely because I don't know what I'm talking about and therefore can't possibly know where I'm going. Still: the topic seems interesting, something related just fell into my lap, and time and interest in getting blog entries have been tough to come by, so, "here goes nothin'". 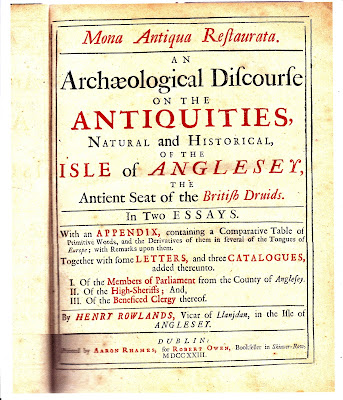 Some time ago I was upgrading my library with a few Olde Booke purchases. The incentive behind one of these was that I'd been catching dismissive comments from Academia for several years and the comments had begun to acquire an unconvincing aura [well, let's say it: a stink] about them which was suspicious. They had begun to sound like the conservative cant of the academic tribe. They were reminiscent in fact of such near-derisive put-downs suffered by many anomalistic subjects. The "Druids" were everything from a bunch of brainless pagan priests to maybe an invention of "modern times" who never really existed at all. Their "non-existence" seemed far over-the-top and not to be taken seriously by me for a moment, and knowing what I know of humans, "brainlessness" [foolishness; stupidity of primitive people; charlatans; etc] did not seem likely. But what-the-heck, maybe the "experts" were right.
To do a little private "look into", I decided to try to find the oldest attempt to study the druids [in English] that I could.... something hopefully before the modern prejudices of the establishment would have settled in. As you can see above, that book was/is Henry Rowlands: MONA ANTIGUA RESTAURATA 1723.
Expensive.
Magical.
Worth it. 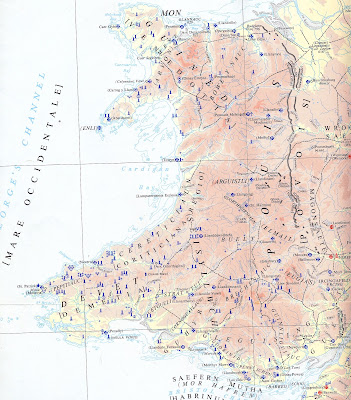 Rowlands was Vicar of Llanjan, Isle of Anglesey, Wales. Like many vicars of the age, he preferred a hobby which took him outside of his church doors than locked him within them. In fact, this good fellow wanted very much to understand the ancient pagans of his Welsh isle perhaps more than his current Christians. [Actually he may have been a great vicar, but he DID spend an awfully lot of time on Druids].
Rowlands' interest was fired by his belief that Anglesey was the ancient Isle of Mona, and the home of the high college of the Druid priesthood. He probably was right on all of that. If this Isle was that significant to Druidism, then what could he still find out about it? Fortunately in Wales there are still today many old megalithic sites [see the map] and many in Mona, and folklore about some of them. So Rowlands began to study everything from the ancient writings to the geology of Anglesey to the megalithic remains. And he, at this very early time in English-language book-writing, began to see a picture emerging about his Isle, and put it on paper for all of us late-comers to read. Rowlands, a Christian man of his times, tried to take what he was gleaning and force-fit it into an Old Testament biblical schemata, and so turned much of the "where did this come from?" part of his book into nonsense. Such Elmers Gluing of different resources together is what gets academe to reject everything about an old work. It is the Baby & Bathwater phenomenon. I find it rather easy to carve away the Old Testament intrusions from the direct fieldwork. And so I find much of Rowlands interesting. 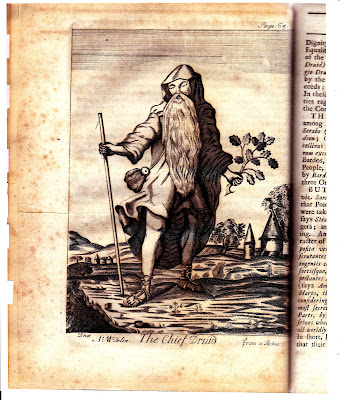 What do I suggest that Rowlands knew? I think that Rowlands was right that the druids had a major [if not THE main] "college" resident on Mona. This was why the druids made a constant retreat from the Romans in the direction of NW Wales and gathered there. There they put up a great bluff with all manner of weird behavior to attempt to spook the Romans out of a fight, but the Romans had seen weird bluffs before and ultimately just swept across the narrow waterway to the Isle and scattered them without a fight. This is the central truth to take away from the Roman record: when facing the druidical priesthood, that priesthood DID NOT FIGHT. It bluffed but ran. Druids were in my reading people of peace. Petty Celtic tyrants may have been men of war, but not the actual druids. This is a rather big deal and fits smoothly with several other aspects of what seems to be true about them.
Mona was home to a major College and, therefore, the base of the archdruid. I have no idea of what this meant. Maybe he was a strict authority; maybe he was just a facilitator. I find nothing credible [yet] about how he may have wielded that authority. Rowlands didn't either. But he seemed to find that the druidical college had three distinct areas to it. These "specialities" defined the three classes of druids: Beirdd, Offwyr, and Druda. The Beirdd were the druids as we tend to picture them: Bards of History and Law. The Outreach program of the Inner Druidical Priests. The Beirdd are those that volunteered themselves out to the petty tyrants as Keepers of the Political History of those "kingdoms" and councillors of right judgement between political disputants. What were they really doing? They were trying TO KEEP THE PEACE. The druids, an organization viewing The Cycle of Life as sacred, has come up with a brilliant way of minimizing wars. Nothing could STOP wars altogether, but it was apparently a priority for these people to try to prevent them.
So, who were the other guys? 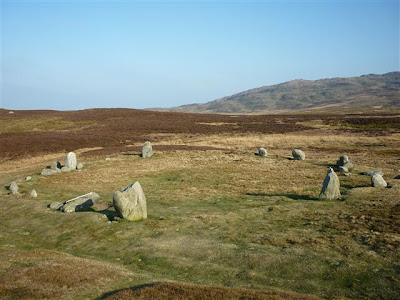 There is that famous paragraph in Diodorus about the priests of the Hyperboreans [who are, under any reasonable way I've seen discussed, the British Celts] "bringing down" the god Apollo every nineteen years in their round temple [again almost certainly Stonehenge], and generally showing knowledge of and interest in the heavens. This sort of thing matches Rowlands second "school" of the Offwyr. These collegians were the students of the natural world. [The picture above is of a Welsh stone circle at Penmaenmawr]. "Students of the Natural World".... the lives of the plants.... the lives of the animals.... the properties of materials and fire.... remedies, potions, the living pharmacoepia... the movement of the "stars".... the winds, the weather, the seasons.... These people had found a way in the middle of primitivism to create an environment within which it was possible to begin the paths of science, and doubtless applied science as well. It seems almost a certainty to me that from these "explorers" came the concept of the "magician", and the wizard and the witch in later defamatory Christian times. It is also important to remember that the early Church did not doubt the abilities of these "pagan sorcerers" to actually DO things; the Church merely said that such activity was DANGEROUS. What all the Natural Magicians of the druids, the Offwyr, could actually DO is still a mystery to me at least. But one would at least suspect potions and cures, advances in some material technology, predictive astronomy, good calendar information, good agricultural information, and probably occasional new inventions. "Real" magic? Not the Offwyr. The arena of the true "other" seems the realm of the Druda.
By the way, I have memories of commentaries wherein the dismissive skeptics cite the "impossibility" of druids having made the ancient megalithic structures such as Stonehenge, and going on from there to dismiss them entirely as having any significance. Well.... it is of precisely of no consequence for our exploration of "Rowlands' druids" of say the 300BC-600AD period that they built any megaliths. It is only important, and that only marginally so, that they used the sites. That they used the sites [ex. holding ritual at old tombs areas and burying bones under stone piles in "auspicious" locations] seems at least extremely likely. If Diodorus' remarks are to be placed into any context which makes sense, then they at least "used" Stonehenge [or another great circle {Avebury?}] as a seasonal ritual meeting place. If any of the "modern" remembrances mean anything, then circles like Boscawen-un in Cornwall were sites of druidical competition [gorsedds]. Lastly, if Stonehenge and other megalithic monuments served at least in part as astronomically-linked calendar devices [and the study of archaeoastronomy is by now so robust that only members of academia can be so biased as to resist it], then why is it not only possible but even likely that whatever smart "priesthood" who saw and used these relationships way back in 2500BC or so did not pass on the understanding of what the structures did over many centuries? Did the Egyptian priests "forget" what the pyramid builders thought about astronomical alignment of "sacred structures" just because centuries passed? Look at the tomb ceilings of the chambers in the Valley of the Kings.
But on to the third and "highest" druidical group..... 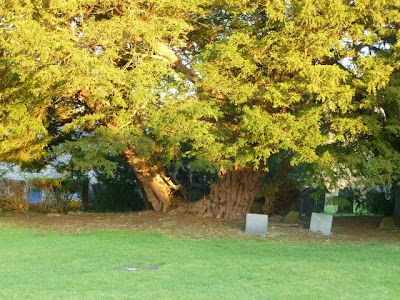 Who were the Druda, and what was their expertise?
Rowland saw the Druda as the high college of the organization called to the study NOT of the natural world, but of the spiritual world. It was their task to probe the deepest questions of existence. Whether they found answers to any of it who knows?, but it is from them that must have come the foundational druidical insight that it is the "Cycle of Life" which is the pre-eminent feature of existence, and which must be honored. This they symbolized as a three-lobed clover or shamrock, which members of the order wore on their cloaks. The three lobes stood for Birth, Life, and Death&Regeneration --- taken of course directly from observation of the kingdom of the plants, and seen as applying as well to the heavens, the seasons, and with wisdom's eye, possibly to animals and humans. It is this Circle which druids continuously drew on the ground in front of St. Columcille, as he converted his way across Scotland in the post-Arthurian period, they accusing him of preaching a religion which was contrary to the Cycle of Life, and he claiming otherwise [despite that the fundamental vision of druidism is cyclical, and Christianity linear]. Columcille, to give him credit could honestly claim that Jesus was definitely "pro-Creation" and therefore honored all aspects of it. 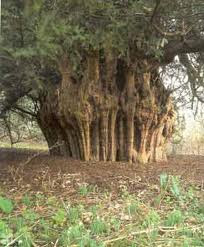 The druids are said to have loved the forests and the trees. There, perhaps like George Lucas pictured Star Wars' Yoda, they "felt the Force". Maybe I should be embarrassed about this, but ever since I was a kid I "felt the force" in some sense when I was in a forest or under a great tree, too. Life seems all around, and palpable. What that is, I can't honestly say, but hearing that the druids preferred the forest for meditation or a great tree for a meeting place is very natural to me.
It is agreed apparently by almost everyone that the druids regarded certain species of trees as special in various ways. Whether anyone should say that this was "tree worship", I don't see it going that far. Trees are more loci of nature's [yes, spiritual] powers, but not exactly "gods". Respected, yes. Never taken a sharp blade to when living, yes --- the mistletoe ritual doesn't count against this as the mistletoe is a "gift" from the oak tree itself to be used in ritual. Oaks were high on the list of symbols of the power of the Life force. Some folks even interpret the word "druid" as coming from the word for oak ["dair" Irish; "deru/derwen" Welsh]. Different tree species had different meanings for these people. Another "magical" tree in this story is the Yew [striking examples of which are in the pictures above both to the top and to the left]. The Yew tree is the tree of Immortality and the spirit-world. It is also the tree which provides the "wand".

And that leads us in a, to me, other surprising direction in this tale.... a direction to pursue in part two of this "intellectual fiasco" I am bumbling through today.
Posted by The Professor at 4:28 PM