BIGFOOT as a Human/Ape hybrid: what's this all about? 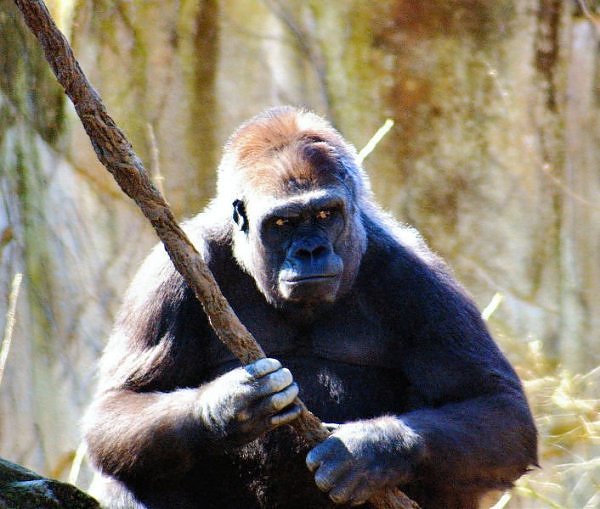 The fellow above may or may not be ready for the San Francisco Giants, but even if he is, he'll probably not be allowed to play. He just ain't human. [despite a LOT of appearance to the contrary]. A friend of mine recently bombarded me with several articles on the claim that somebody, who allegedly looks a lot like the fellow above, is in fact human, or at least a big step closer to human. Bigfoot... an ape/human genetic hybrid says the claim. Cryptozoologists have apparently been hashing this over for awhile, but the burst into the popular press is more recent.

I'm not going to claim much for this post [the study which says that this claim is true is "at the reviewers" of a responsible scientific journal, allegedly, and therefore no significant scientific details are available to make respectable comment possible.] The only reason that I'm posting something is that I used to be involved with this strange subject called biochemistry way back in the stone age of the 1960s [masters degree era] and maybe can set up the issue for you for when the data arrives for general reading. 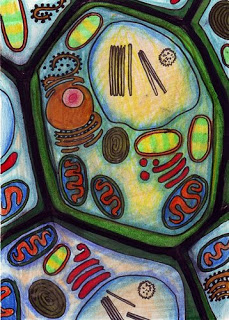 What we've been told is that the data indicating hybridization comes from the study of Mitochondrial DNA. Some of you know all about that; probably some don't. I'm going to do a little "general education science" here to set up the discussion.

When you look at any cell of any complexity other than the simplest, you see within its cell wall an array of microscopic structures [and some less-obviously-organized biochemical "soup" --- mostly water, salts, and big molecules --- which the structures seem embedded in]. The structures have specific roles in maintaining cell functions. One role is "energy-molecule production". The microstructures responsible for this are the mitochondria. The artist above has represented them by the blue ellipses with the reddish "snakes" within. So, mitochondria are vitally important. And, perhaps due to this crucial importance, mitochondria have their own DNA separate from the main store of DNA resident in each cell's nucleus [that's the big blue balloon blob in the drawing above]. 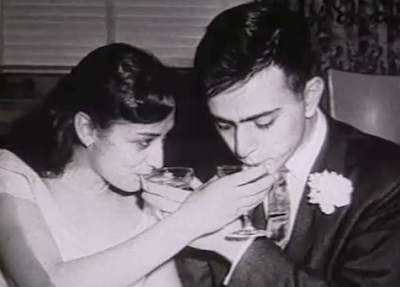 That brings us to a brilliant lady named Lynn Margulis. That is her above, celebrating her marriage to Carl Sagan. As Carl's first wife, she was much more than a match for him in intelligence, and .... well .... this pairing of geniuses ultimately could not coexist in the same household. Fortunately, these stresses did not hinder Dr. Margulis from synthesizing a major concept about the evolution of complex cells, which has the happy attribute of probably being true. 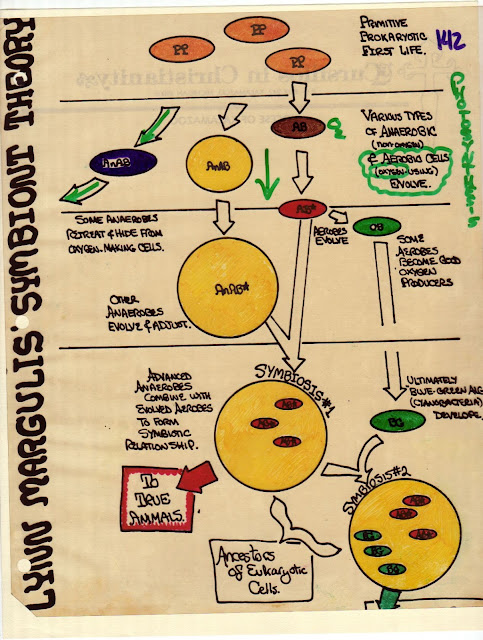 The above is a page of notes that I took from listening to Dr. Margulis explain her concept to us scientist-types at the AAAS many years ago. My simple cartoon version shows the first cells slowly diverging from one another into more specialized talents; some animal-like [i.e. carbon-compound eaters] and some plant-like [i.e. oxygen-users and free-oxygen producers]. Margulis' genius was to see the possibility that these early specialized microcells might begin an era of merging, some specific talents "swallowed" into larger less specialized ones. These "random" joinings and co-op livings would be trial periods, mostly failures; but the best symbiotic communions would survive. From these unions ultimately developed something like modern cells, as "comfortable" internal symbionts dropped the need for functions handled as well or better by the larger commune, while keeping hold of the critical functions that they were contributing to the complex. As time [millions of years of getting comfortable] went on, cells appeared with embedded microstructures wholly dependent upon the complex, but also the complex wholly dependent upon them. A symbiotic relationship had turned several entities into one.

In the case of the mitochondria, these organelles retained their specific genetic codes --- i.e. that was not pre-empted by the cell nucleus. The internal structure of the mitochondria was apparently so "right" for production of energy compounds, that messing with it was biologically/evolutionarily stupid. So Mother Nature allowed cells to keep an entirely separate sort of genetic code, embedded in the mitochondria, yet still DNA. This DNA is also passed from parent to offspring differently.

Whereas ordinary DNA comes from the sperm [half] and the egg [half], this other stuff doesn't. The sperm needs mitochondria to produce energy compounds for the hard swim, But once it gets to the egg, the internal actions of the egg accept only the ordinary chromosomes, and the mitochondria get the shaft [i.e. they become food]. The offspring is built upon the genetics of both parents' chromosomes, but on only Mom's mitochondria. So this is the famous "maternal lineage" inheritance that we've been hearing about particularly as to an "original Eve" in Africa long, long ago. 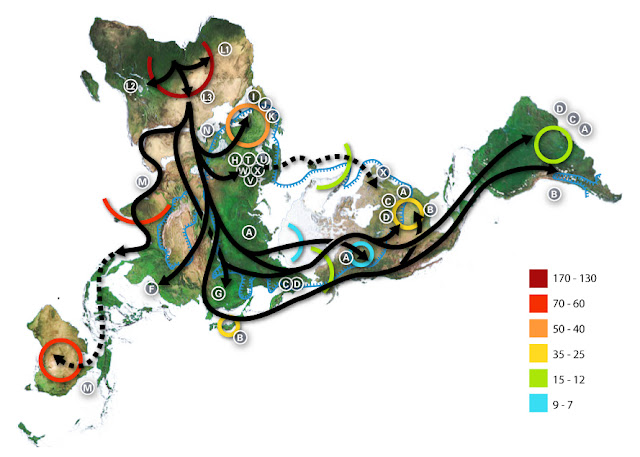 Whereas ordinary DNA from the chromosomes will number genetic code words in the many millions [and therefore a real tough research project], mitochondrial DNA numbers only 16,000 [I believe] genes. This is a much more manageable number to make genetic-similarity comparisons with. Also, it's possible that the circular structures of mitochondrial DNA are harder to split and turn into chaos than the linear/spiraling nuclear DNA, and the mDNA is embedded in the tough little mitochondria, so maybe it even lasts a bit better. Whatever the reasons, mDNA is handy and is the measuring stick of choice in making species-similarity comparisons.

The above map is the putative map of Proto-human and human migration patterns from Africa to South America and Australia based upon genetic code differences seen in mDNA from modern native micro-populations and archaeological and palaeontological specimens. Some of this is flat science; some of this is speculation. The science is the number of code differences in the samples, and the speculation is the "temporal distance" represented by any given number of code mutations. [i.e., scientists make some guesses like "X number of mutations represents approximately Z number of years since these species diverged, or this human type had to get from one place to another". So the comparison of mDNA mutation differences is widely used and popular among anthropologists and geneticists of all sorts.

Here's what a test array of mDNA comparisons looks like, and when these "Bigfoot" results come in, is what we should be looking for in them.

The graph shows the array of tests that a study did of human samples [clustering together in the lime green] vs chimpanzee samples [clustering together in blue]. Obviously human variation is nothing like chimp variation from the human. We ain't chimps, much as we act like them sometimes. The red cluster is for some neanderthal samples. FAR closer to us than the chimps, yet still cleanly separate. When the laboratory results are shown for the alleged Bigfoot/Human hybrid mDNA, the cluster from those results COULD end up on either side of the neanderthal cluster, but if it is on the right side then the argument that Bigfoot is a "hybrid" will have to be made on much more specific grounds [something like some mDNA areas are human-identical, and shouldn't be, and some mDNA areas are more like ape mDNA. Such a claim will surprise me at least until I hear the argument, because, as you remember, the mDNA comes not from "mixing" but from the mother alone. Ultimately mDNA is mixed in humans due to a lot of human-human interbreeding. Do we think that there would be a LOT of Human Sasquatch interbreeding? Also, females are the important element in the story. Human mDNA gets into Sasquatch by a Sasquatch mating with a woman, that woman having Sasquatch babies [doubtless a difficult birth for the smaller human birth canal], some of these surviving babies being girls with mom's mDNA, and either being popular successful breeders or there being an awful lot of sasquatch rapes of women who then have successful pregnancies.

I guess that I have nothing to do but to await whatever results and awkward explanations may come. 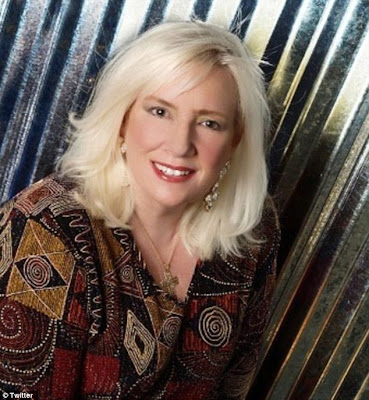 This is the lady, Dr. Melba Ketchum, who runs a gene-testing laboratory, who has done the work and has prepared the science paper that we await. I have only one legitimate complex question: where were the sasquatch mDNA samples procured and is their provenance good? All manner of credibility issues exist here. The science side should take care of itself and show or not show "strangeness". 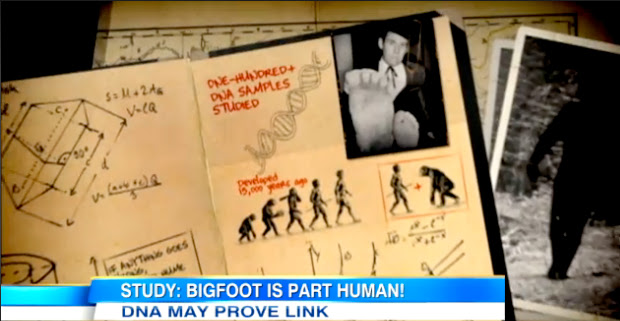 Nevertheless despite great prematurity, the story went out. The media blared "over 100 samples tested". Well, WOW --- where in the hell can you get 100 bigfoot samples? It's hard to shove one's incredulity back down one's throat. .... I'm trying. 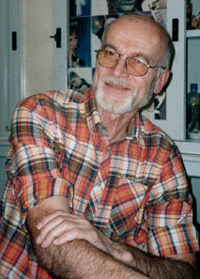 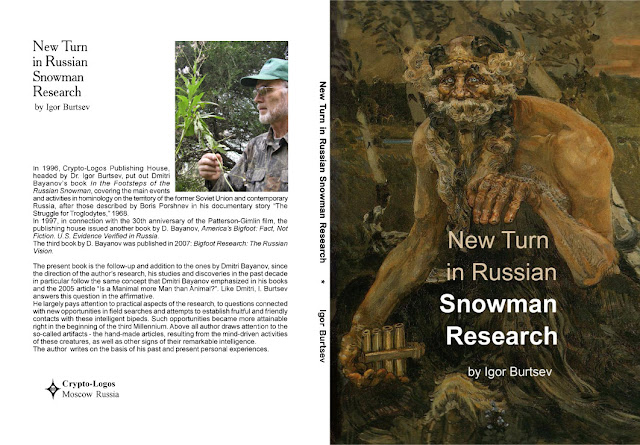 I gather that we owe the prematurity to this fellow [Igor Bourtsev], a well-known ABSM researcher with ideas and a new book which would fit quite comfortably with these results as announced --- one "fact" claimed was that the results would show this hybridization to have taken place about 15,000 years ago, a number that I believe both Bourtsev and Myra Shackley would like. Regardless, I think that Bourtsev may have not been able to contain himself and spilt the beans. This use of the term "hybrid" also plays to several of these people wanting Bigfoot to be declared close enough to human to in fact deserve commonly granted human rights --- I suppose that would mean some form of "citizenship".

The term "manimal" has been thrown about, something deceased ahthropologist and sasquatch expert Dr. Grover Krantz detested and felt that there was no evidence for. 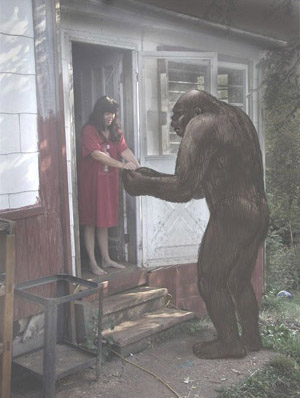 Bourtsev apparently visited the US not long ago and particularly wanted to interview a family at a farm setting who claimed regular Bigfoot visitations. Descriptions of these visitations seems to have clinched for Bourtsev [and doubtless others]  Bigfoot's "humanity" or at least intelligence. It seems a regular feeding program is supposed to go on. Brings a whole new meaning to "Guess who's coming to dinner?" Pretty far Out Proctor for me at the moment. Wonder what our cousins the gorillas think about being no longer closest kin?

Given how we act: probably pretty good.

Posted by The Professor at 1:20 PM