TRINDADE: " Hey Zorf! You forget to turn off the Anti-Photo Field Again?" 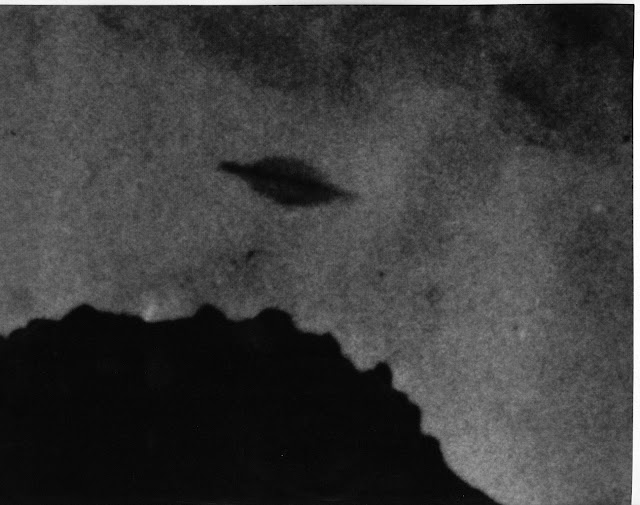 January 16th, 1958, near the Island of Trindade off the Brazilian coast: A Brazilian Navy science ship, the Admiral Saldanha was anchored off shore and preparing to embark on a mission associated with the world's studies of the International Geophysical Year. Almost everyone was on board and many on deck, military higher and lower ranks, scientists, technicians, and engineers, and a photographic team. The last exercise prior to departure, the hoisting of the launch, was progressing, and in the stern of the boat, the chief photographer was set up to film the activity. And then.....

At almost precisely the same moment, ship's personnel in both the stern and the prow of the boat shouted an alert that some unidentified aerial object was approaching Trindade. Many persons were able to watch as the unknown object approached, circled the Island, and flew back out to sea [a persistent error exists in our minds about this, though not in the official report. The object came from the direction of the continent, almost precisely west-to-east, not the deep ocean. It then retreated back towards the continent roughly NE to SW; this visualization occurs because the ship was north of the island looking south mainly].

It was the photographer's squad leader along with a retired Air Force captain who went quickly to Almiro Barauna [the man who would take the photos], yelling and pointing to him the shiny object still some distance away. The ship's dentist also came running to him, stumbling over the deck furniture as he came. When Barauna located the thing visually, he pointed his [fortunately] already loaded and readied camera, and managed to get four reasonably good shots. The "lucky" one over the island occurred when the object posed momentarily in a hover.

By this time at least a dozen and probably significantly greater number of witnesses were present to observe the approximately thirty-second performance of the object near the island. Barauna had six shots ready in his camera and took them all. (Four were deemed good and different enough [after the initial look at the developed negatives] to proceed later to the positive prints that all of the rest of us see).

It was the Commandant of the Brazilian Trindade base himself, Carlos Alberto Bacellar, who was onboard the Admiral Saldanha at the time, who took charge of Barauna and the roll of film and took the undeveloped photos to an improvised darkroom in the ship's infirmary. There Barauna [in a ten minute working period] developed the film and showed the negatives [still wet] to Bacellar. Bacellar affirmed that the markings on the negatives showed what he had seen visually. Negatives were then shown to several other on-deck witnesses, who confirmed that these images portrayed what they had seen.

These are the real world facts which are important to keep firmly in mind when/if one tries to debunk this case. Almost ALL of these facts are ignored by debunkers who ply their dishonest ways by looking, from great distances, at the pictures and rumors surrounding personalities. To ignore these "on the ground" facts while pronouncing speculations at large variance to them is, at a minimum a disturbing comment upon the functioning of the human mind. I say that seriously. 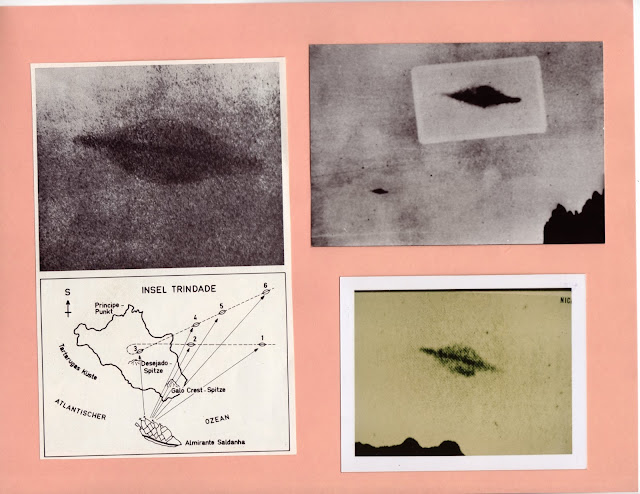 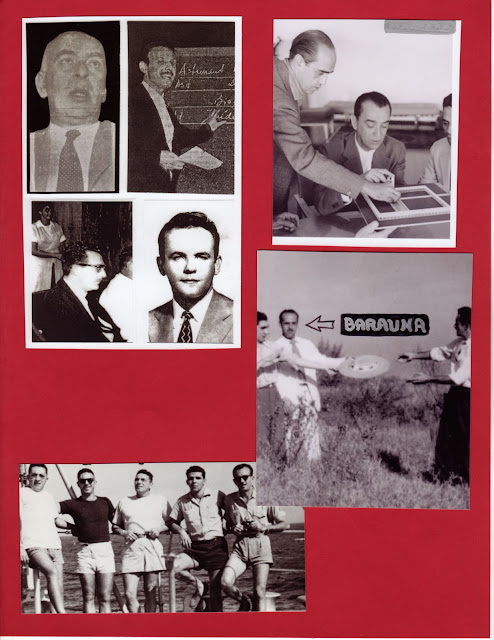 So, the story leaked out --- not surprising since there was a newsman on board. The Brazilian Navy was "somewhat" forthcoming about concurring to the press that an unidentified object had been photographed, but initially no pictures were released. Fortunately for we US UFOlogists, there were three excellent UFO investigators on the scene with good military connections, who were able to get confirmation of the facts and how the pictures ultimately reached the public. These were three of the guys in the upper left montage above. Top left is Auriphebo Simoes, who was making direct contact with CSI-NY's Lex Mebane. Top right is Flavio Pereira, who had many military and scientific contacts. And bottom left is J. Escobar Faria, who had early contact with Dick Hall. These three were serious conservative "NICAP-attitude" UFOlogists, unlike the sometimes-cautious-sometimes-not "APRO-attitude" UFOlogist, Olavo Fontes, at the lower right. Simoes, Pereira, and Faria were friends whose information always proved responsible. There is no question that the Brazilian Navy felt that the information was true but sensitive. It came out finally due to an accident of a newsman friend visiting the Brazilian president, Juscelino Kubitschek, [seated in the upper right photo], who allowed the journalist to see the prints.

Well, the debunkers now had a major problem. The US intelligence community seems to have played a role in this, but one cannot say absolutely. Brazilian opinion was that the Brazilian Navy was under pressure NOT to publicize this, and the pressure came from some unknown "high" source. The US could put pressure on the Brazilians, as Brazil was totally dependent at the moment upon sales of weapons [like advanced planes] from the USAF. Reports to the Pentagon from military attaches ranged from vague statements about possible hoaxing to smartass commentary like Trindade was such a barren place even aliens wouldn't want to visit there. Concerning the idea of a hoax: you have read how the event occurred. This retelling comes almost entirely [minus homey details like the dentist tripping over the deck furniture] from the formal reports of the Brazilian Navy itself. Hoax?? A literal boatload of witnesses, many of technical skill, seeing an object BEFORE the photographer even saw it --- but of course he must have psychically predicted this so as to have already installed fake photos into his camera. AND EVEN WITH SUCH PSYCHIC PROWESS, the case STILL stands with many witnesses regardless of the corroborating film. Painfully stupid.

But still today this stupidity exists. Desperate debunkers say that Barauna was really good at making fake photos, even of UFOs.... well, he WAS. That's him and a team in the middle right above. What's he doing?? He's BEING PAID by the Brazilian AF to see if they can duplicate the Barra di Tijuca UFO to see if IT could have been faked. Barauna was a photographic ace employed by the government with their confidence --- why do we think that he was on the IGY ship team?? Recent rumors spewed by some distant relative saying that a closer relative once said that Barauna admitted faking the photos was denied by that closer relative. But, hey, if it gets rid of the awkward case, who cares??

When the USAF was asked by NICAP what they thought of the case, notorious Pentagon debunker [and known flat liar] Colonel Lawrence Tacker said it was a hoax. Re-questioned as to how it was determined by the USAF to be a hoax, Tacker said that a USNavy investigation proved it to be. When the Navy was asked about this, they said that they had neither determined nor said any such thing. Glorious.

When Donald Menzel was asked about the case, he said that it was a Hoax. But when queried privately in letters from Dick Hall, he said that he did not have evidence for that, but believed, rather, that it was a misidentification. A misidentification of What?, Dick asked. Menzel replied that not knowing the specifics of the camera used nor the film [these were available, though, and no one has found them to be relevant to the case], he could not say for sure, but it must be something like a conventional aircraft plowing through an atmosphere creating an oval of condensation around it. Now, the BAF and Navy surely could have considered this unlikely event out at sea in a remote location, and no one thought this, but Dick persisted: wouldn't it take pretty specific atmospheric conditions to even consider this? Menzel said yes. Dick then offered to get him the atmospheric read-outs for the place and time for his analysis. Menzel did not respond.

Although very fast-moving jets are known to briefly "explode" an oval of condensation around them, to sustain anything like this over long reaches of ocean and land [which notoriously changes the air environment above it] is, to my understanding, impossible. [Where's Jim McDonald when I need him?]. Plus, the film was analyzed microscopically both by the Brazilian Navy and by the RAND Corporation in the US and, not only were no evidences of tampering or montage found, but the images displayed a consistent definable edge to the object, so as to allow RAND to say: the four photos display images consistent with a single object of determined shape seen/photographed at different distances and tilts. 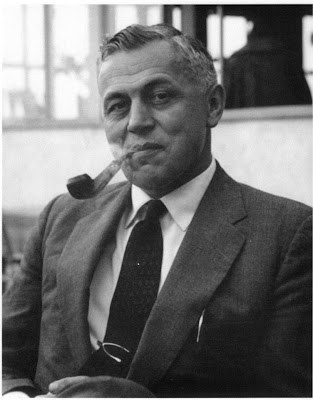 To say that I'm impatient with the debunkers is putting it mildly. I'll bet a bundle that the guy above [our legendary NPIC photo analyst, Art Lundahl] looked into this case and was right with me on this one. He really liked UFO photos and had a whole drawer-full of them. I'll bet Trindade was in there. 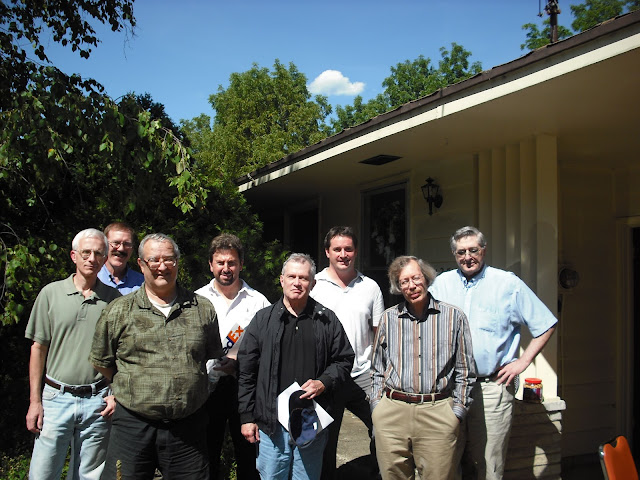 Here's another bunch of guys who are with me on this. Every one of them is a better UFOlogist than Donald Menzel, and much the better Citizens of the World and Pursuers of the Truth.

Sometimes these things just have to be said without sugar-coating.   Blessings, friends.

Posted by The Professor at 1:26 PM