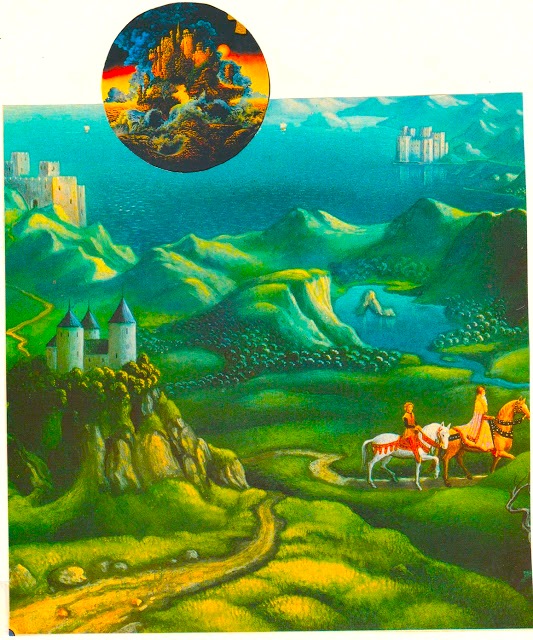 Are There Any More Paths To Search For Faery?

We have made a respectable effort looking at the basic encounter phenomenon. I think that it was worth it, and that it seems to indicate a true mystery, and one which involves a form of intelligence not our own. But with anything which would have this character, the research at some fundamental level is not controllable, and, unless the "other side" cooperates, will probably remain an anomaly forever.

But it doesn't mean that I'd just give up the fun of looking, just because I felt that I'd never get all the way to a "scientific" de-mythologized answer. My guess is that I'll keep reading about this stuff until the day of "Passing over to the Other Side" and seeing the answers then (I hope.) And ... I have some intuitions that there are three more areas of research which are closely related to Faery anyway.

1. The mystery of The Balls of Light;
2. Poltergeists: "Bumps" in the night and "Knocks" in the mines;
3. Jottles: Disappearing Objects and Straying Sod.

One of these seems to allow some actual science-like research (BOLs). One of these has sort-of been research but (to my mind) largely botched. And one of these we are just now slightly taking seriously. I'm going to make some VERY modest attempts at addressing these three mysteries before letting this Faery blog glut go. Today, BOLs. As an old UFO researcher, at least I can claim to know something about that. 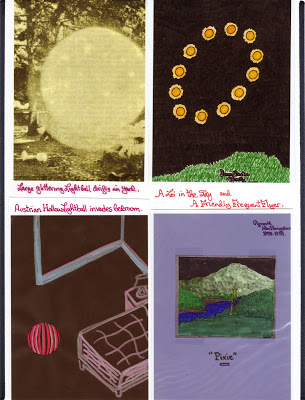 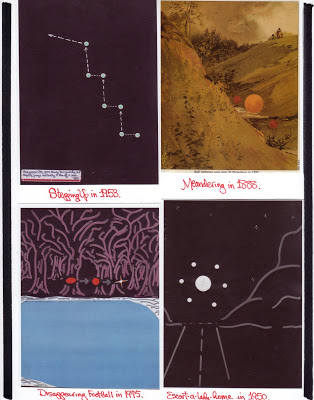 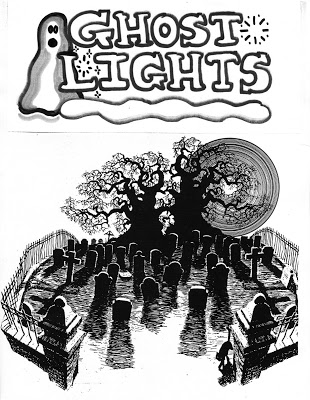 As you see, the category is a complexity, and therefore in bad need of unraveling. I'm not going to do it --- here anyway. I've made about ten runs at this area of mystery in blog posts of the olden past, so you can search back into these if you wish. I WILL steal freely from those posts though.

There are THOUSANDS of Lights-in-the-Sky reports in UFO files. There are over three hundred in my file drawers alone. A bunch of these are just because whatever-it-was was a long way away. UFO, Faery, or X?: we won't worry about those very distant lights. Some of these are just because the light was so bright that you couldn't see anything else. Let's skip those too. A few actually ARE ball lightning, and a few even are marsh gas. But there is a lollapaloosa of a pile which are none of those, and some of these get very close indeed. For me, it has been the biggest conundrum in UFO research as to whether to include close encounters with BOLs part of the core UFO research field. My intuition has been "No."

Here's a taste of what an UFO researcher gets dumped on his desk: a few years back (only a couple maybe), a colleague was interested in finding out every UFO report which featured a physical effect (particularly an electromagnetic one) and whether those kinds of cases continued to occur in large numbers after the year 1957. 1957 was a data anchor because it was the year that the US had its huge flap of UFO cases involving car engine stops and other E-M effects. As he collected, he would send copies of the cases to me. I was swamped as usual with too much case logging et al, but I tried to do a little. The following panels are three such tries. 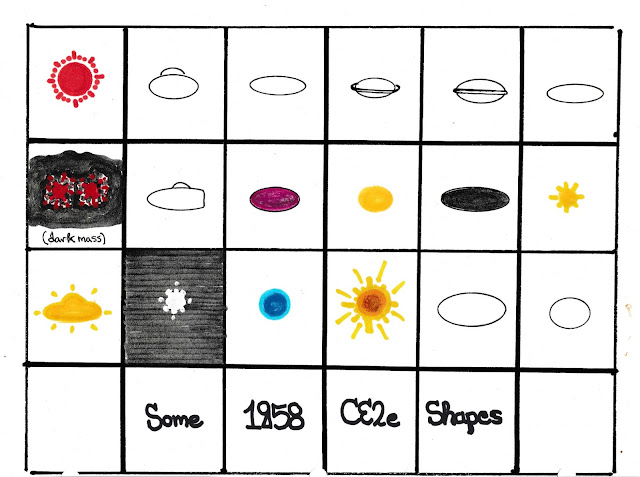 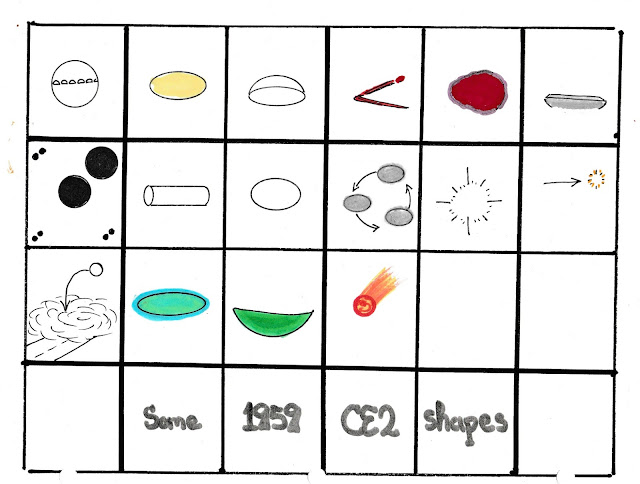 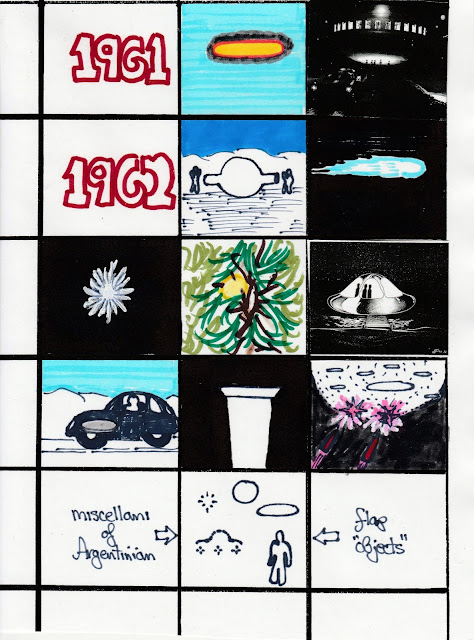 So, cases of all types of shapes, and all with allegedly some kind of physical effect on the environment. A lot of them had clear technological shape, and another lot seemed to just be really blindingly bright. But a bunch were just BOLs. I can't read the reports and the craft descriptions and conclude that all the agents behind these effects were of the same nature. Maybe they were/are, but it is not obvious to me. (Other than the Betty and Barney Hill case, by the way, my favorite encounter from a "romantic point of view is the "window" which seems to open up in the sky and shine a bright lightshaft downwards.)

If I'm honest (I am), I'll look at these things and say: I can't see the technology in some of these descriptions, so, maybe for them, I should entertain the hypothesis that those particular BOLs are not part of the UFO core. But if they are not, then what are they? Not something which matches nothing in the reports (like lightning) and not just "ghosts" which don't have a track record of physical effects. But what in the anomalies pantheon does have these possibilities? The Old People might say: Jack O'Lantern and Joan O'Wad the King and Queen of the Pixies. "They" supposedly looked like BOLs some of the time, and could play physical tricks on you.

Alright, somewhat crazy thinking. But while researching the UFO case files, I was also amazed to see the numbers of reports wherein the witnesses felt that they were being "accompanied," or "paced," or "curiously observed," or even "stalked" by the UFO. Sometimes the UFO looked like a machine, but a big number of these cases were BOLs. Here, for what it's worth, are my crude table notes for these cases. I include them just to show you that the cases exist in quantity. 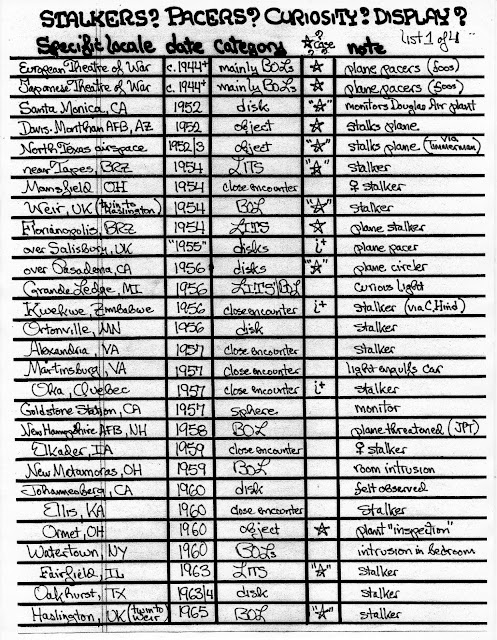 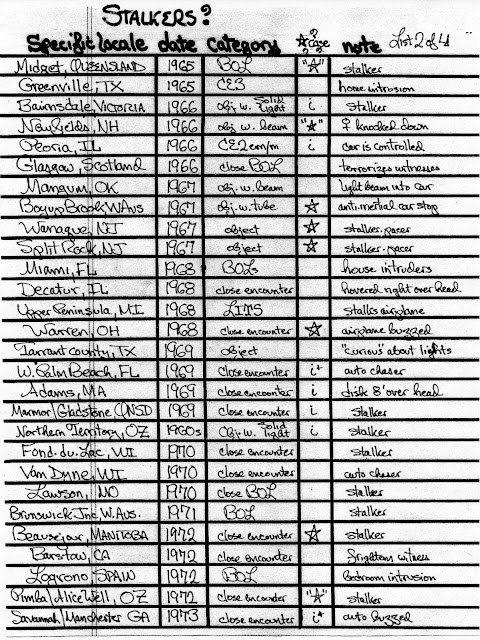 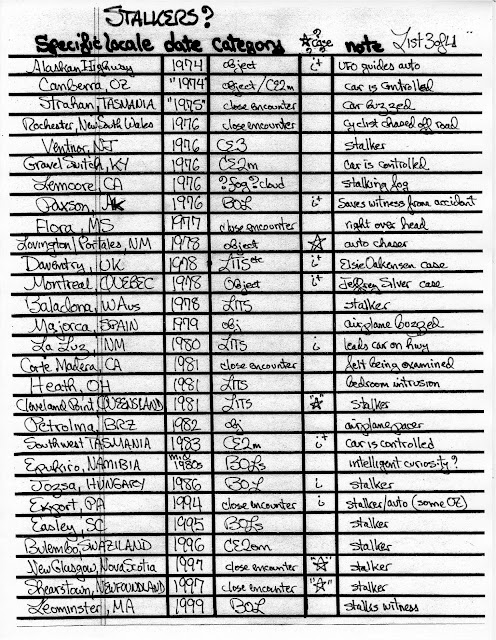 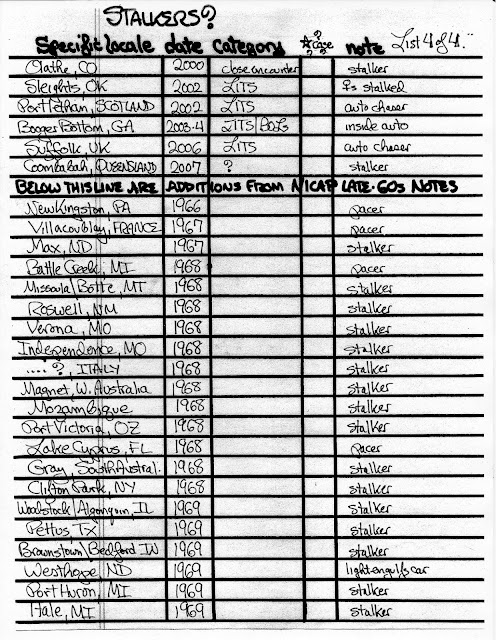 Alright. So far I haven't added much other than BS to the discussion. So, there are BOLs which MIGHT exhibit intelligent behavior, but what else? You and I might have gotten lucky here (for a change.) Our luck has to do with an unrelated research agenda by a physicist who became interested in cracking the mysteries of lightball field areas where such unexplained phenomena appear sort of regularly. You've heard of all these: places like Hessdalen, Yakima, Marfa, the North Carolina "gold hills", etc. Hessdalen, the most famous in UFO research circles, is the home away from home of Erling Strand (a very long time researcher of these matters.) 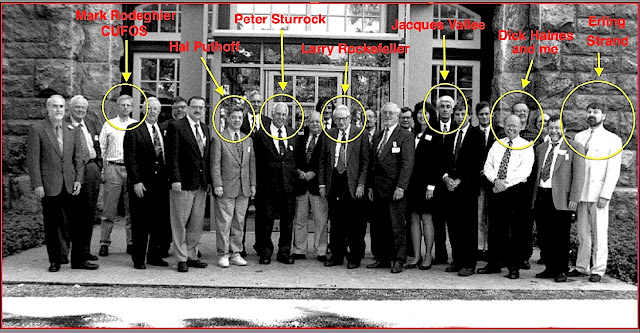 Well, here we are at that famous (infamous?) thing, The Rockefeller-Sturrock workshop. (Dick is smiling broadly as he's just played a trick on me --- rocking backwards to block me partly in the photo. It was OK; I'd been kidding him.) I've circled some of the "players." Erling is on our far right. The amount of scientific brainpower rattled him at first, and he even seemed to lose his fluency in English. (Erling is a really nice guy and I felt terrible for him.) But a day later, he got it together and made a fine presentation on the Hessdalen lights. Noting his earnest use of instrumentation, the outsider science invitees stopped smirking for a moment and showed some interest (They still, three of them anyway, behaved largely like jerks). After listening to Erling, the more jerk-like of them suggested that this was a scientific issue, yes, and they probably could solve it "over the weekend" if they had the instrumentation.


Of course they couldn't and they didn't try. Erling continued his decades long questing and along came the right scientist to truly help out. 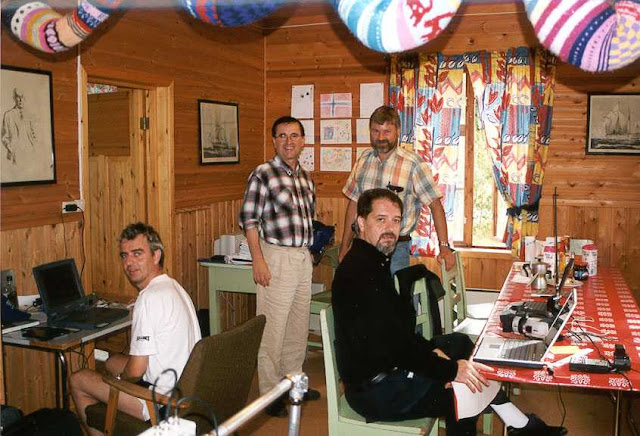 The scientist that was needed and courageous enough to take things seriously was/is Massimo Teodorani, astrophysicist and remarkably open-minded explorer of mysteries. (That's him seated at the right with Erling standing behind him; they are at the Hessdalen "school" research site.) Teodorani attacked the problem with technology and effort. 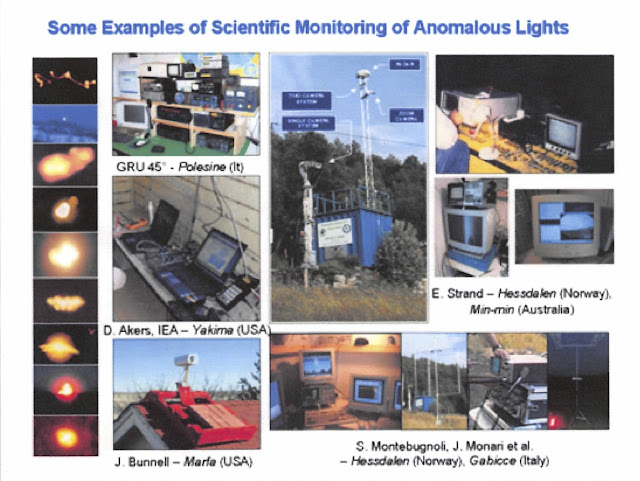 These are examples of the equipment used and at the left some of the target BOLs. Teodorani captured data from many BOLs at Hessdalen and was certain that he had demonstrated their real world presence, but what caused them? Ball lightning and anything similar to that was a laughable non-starter hypothesis as became clear. He wondered (in print) whether esoteric ideas like mini-black holes or tiny wormhole exits could have anything to do with this, but knew that such commentary was just that: talk. There was neither math nor science to connect these things. 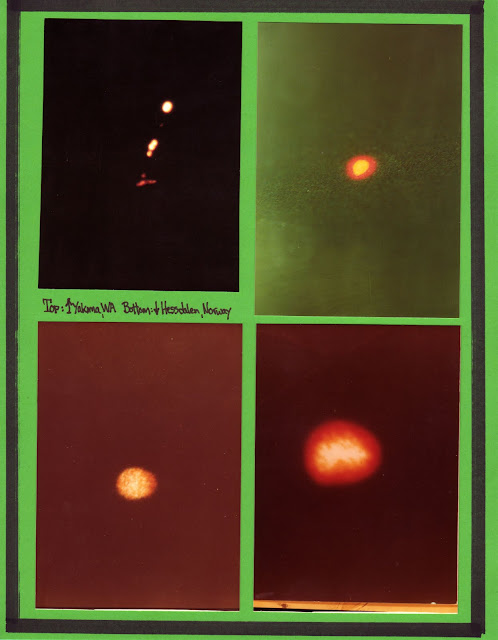 Other BOL sites existed. The above are photos from my/CUFOS' collection of such things (Yakima top and Hessdalen bottom.) Having had success at Hessdalen, Teodorani decided to go to other well known fields and see if results duplicated there. He went to several places where he sometimes did the work alone (with his team) and sometimes did it in concert with local people. The results generally showed the same phenomenon. 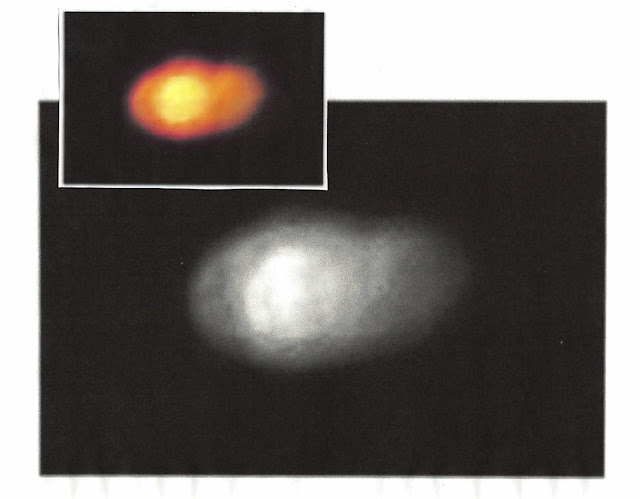 Still, what were "they?" In some incidents there were hints that something other than the light might be inside the BOL. Other times, no hint of that. More peculiar, and unexpected, was the "behavior" of some of these BOLs. There seemed to be in some cases behavior which felt like it was intentional or responsive. 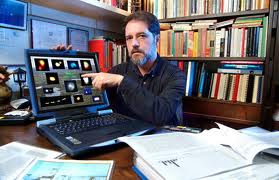 Many lightfields later, and masses of observations (both instrumental and human) he came to what seems to have been a reluctant (soft) conclusion. These BOLs, at least some of them, appear to be conscious. 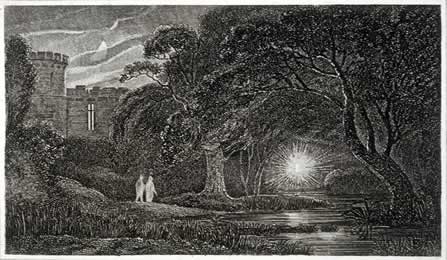 Now whose opinions does that remind us of? 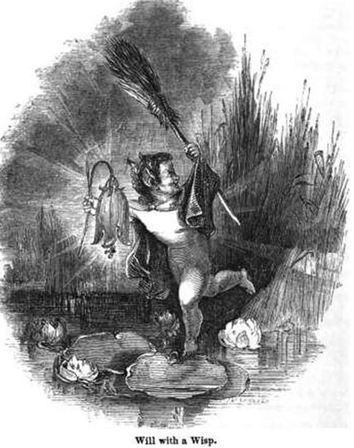 I'm leaving this probe into this unknown here. Read Teodorani's work. It is in a report on a symposium talk that I read the "reluctant conclusion." I don't blame him for any reluctance he may or may not have had --- anything such as that requires great courage. And I applaud him.

I'll belabor just one last story: he became much in demand to give opinions on all sorts of alleged anomalies, and one of these was crop circles. He tried to be open-minded, but every one of these that he was taken to was an obvious hoax. (I agree with him on this topic.) He'd go into the circles with some equipment and immediately see the central holes used by the hoaxers to ensure symmetries. He couldn't help laughing to himself about those inevitable "revelations." But there was something strange which happened that boggled him.

After going through one hoaxed circle, he was walking back through a little tunnel to a train stop. There he met an old woman that he didn't know. She wanted to talk with him for some reason. She said that in the morning she had passed through this same tunnel, and all sorts of little colored light balls had been floating in the air just there. This was a head shaker, as he did not know the woman, nor did he think she should have known him. So why that information?

This odd interaction stuck in his mind when he was later researching another crop circle elsewhere (another hoax.) No instruments recorded anything. As a sudden lark, on his way out of the circle, he thought that he would just snap off an infrared photo "for the road."

When he produced the photo later via the computer screen, he got a shock. There across the fence in the crop circle field was a dark shadow image. The image to his eyes looked just like The Mowing Devil of the famous old chapbook drawing that you see below. 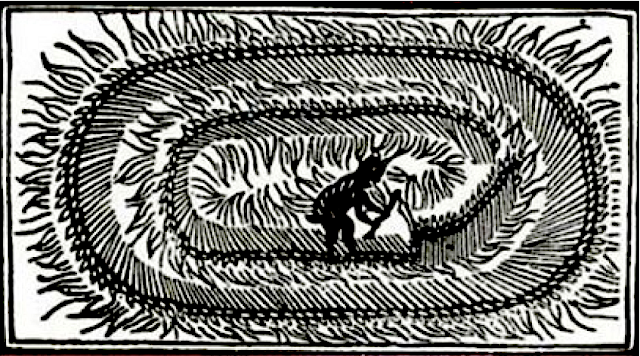 He said that while he thought that this was a simulacrum fortuitously created by a plant, it still made him wonder. Were his two experiences after the crop circle hoax expeditions the Universe (or something within it) playing little trickster games with him?

But we --- we would never entertain such nonsense. Would we? 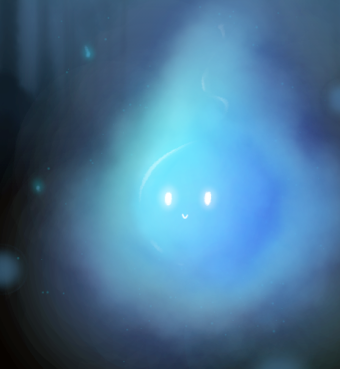