Hello again, folks. This is another "spontaneous" blog posting and, as usual these days, not a polished effort. You may find it interesting enough though, I hope, and go "out there" in cyberspace to make up your minds for yourselves [which hopefully you do all the time anyway, but without cyberspace necessarily playing a role].
The catalyst for the post was the book pictured above. GHOSTS of the CAROLINAS by Nancy and Bruce Roberts who wrote a trilogy of coffee table books about haunts in this area, this one in 1962. I had purchased a double handful of such books for my sister-in-law, since she lives in that poltergeist house and is naturally interested in the subject. While putting this one away, I just thumbed through it quickly and there was a short chapter on the Brown Mountain Lights. They, of course, rang a marginally-UFOlogical bell, and so here we are.
I found that the chapter was surprisingly good for a slender thing, and this may even have been used as a beginning source for several other commentaries about the lights. The picture below, allegedly of the lights in full bloom over the ridgeline, was prominently therein. 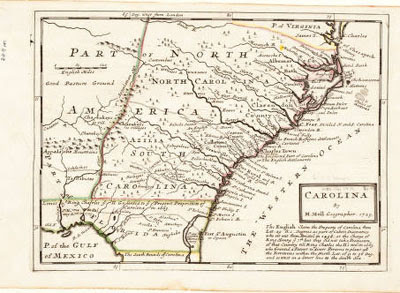 Another impressive thing about the Roberts' short chapter was that they knew about the claim that an 18th century surveyor had seen the lights --- a claim of huge significance to the debate as to whether they are nothing but automobile or locomotive lights. This claim goes as follows: There was a man named John William Gerard de Brahm born in central Europe [no Germany existed yet] in 1717. He trained as an engineer in the army of Emperor Charles VII. War wasn't for him, and he resigned and emigrated to the American colonies in 1751 to work as a surveyor and building designer for the British in South Carolina. He was so good at it that he was promoted all the way up to Surveyor-General for the area from Florida to Pennsylvania by 1764.
The British had just finished a war with the French and wanted good coastline maps fast; they also wanted good interior maps to set the western boundaries of the coastal states. De Brahm was charged with much of that [the map below is one of his own, and the map above left is an example of a finished map of the times]. It is allegedly during one of his innumerable surveying expeditions that he saw the Brown Mountain Lights. To the joy of the skeptics, he probably didn't. To the joy of the romantics, someone else probably did.
The quote-of-note [from his 1771 book: Report of the General Survey in the Southern District of North America] goes as follows: "The mountains emit nitrous vapors which are borne by the wind and when laden winds meet each other the niter inflames, sulphurates and deteriorates". This has been taken for de Brahm's attempt to explain the Brown Mountain phenomenon. Well, sort of.
What de Brahm was doing here was giving a theory for how gases and atmospheric chemistry involves some sort of cycling with the interior of the Earth. He is an early chemical theorist trying to explain combustion [without any knowledge of oxygen] and a thinker of that age which was just emerging from the concepts of alchemy. In fact, de Brahm, though an effective practical pre-scientist, was really a mystic and a bit of an alchemist at heart. The skeptics of course love this as it gives them free rein to act like jerks and smear the "foolish" primitive-thinking man [whose IQ was probably 50 points higher than their own]. But that skeptical Ha-Ha is just a bit quick for me.
In order to do his vast work, de Brahm needed a lot of help. He had a great assistant named Bernard Romans, and was also markedly aided by the superintendent of Indian Affairs, John Stewart and a young explorer [and confidante of the local Native Americans] named Joseph Purcell. De Brahm would have had no need to write about why lights appeared upon the mountains in interior North Carolina unless somebody told him that they DID. WHO got that information? Romans? Stewart? Purcell? By direct experience? Told by the locals? In the end what is important is that there were reported sightings of mystery lights associated with mountains in interior North Carolina at least as far back as the 18th century. Right at Brown Mountain? Again, no matter. The North Carolina mountains are full of these locations. Brown Mountain is just the most famous. 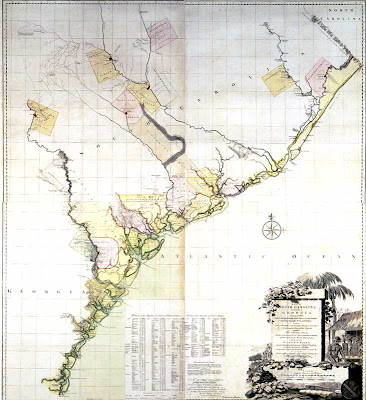 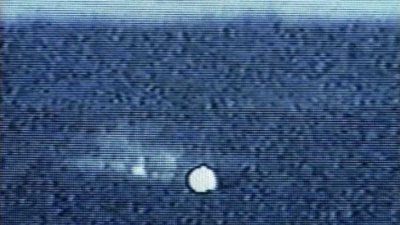 The question then comes down to this: are there sightings of mysterious luminous phenomena at Brown Mountain specifically, or at other locations in the hills? The glib rapid-pass-off saying that no one ever saw such things pre-autos seems just false, despite the clever manipulating attempts by the impossibilists.
The photo to the left is allegedly of a light anomalous. I have no idea as to whether it's a mystery --- it just serves as illustration. Skeptics say that all studies of the claimed phenomena come away concluding that all the sightings are either reflections of auto/locomotive lights or direct sightings of them, lanterns, and fires. As is almost always true of these people, they are saying such things either because they are ignorant or just liars [I will let them choose].
How could I say such an uncivilized thing? Because I know, at least somewhat, and respect, a very good field investigator who has spent serious time there. His name is Mike Frizzell and he is an intelligent honest man, and no fool. Frizzell initiated something called The Enigma Project to look into such mysteries first hand, down-in-the-dirt in the field. Frizzell himself saw the lights. He knew that most reports were wannabees --- the exact misinterpretations which the skeptics want everything to be. But these lights, rapidly and multiply weaving their way below the ridge lines were not those mundane things. Mike Frizzell is the known credible expert witness that you can found your case upon. 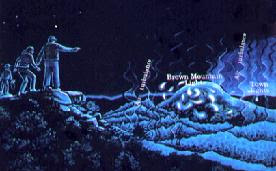 Many, many others have seen the mysterious lights. And it's probably true that 90% of those cases were mistakes. But somewhere around Brown Mountain strangeness occasionally goes on and we don't know what it is. Another group who realized that was ORION, a network of researchers associated with Oak Ridge National Laboratory. I know the organization as having persons known to Dr. J. Allen Hynek, with senior advisors who, at the same time that ORION studied Brown Mountain, were doing "midnight" gratis testing of field samples from the famous Delphos, KS landing trace case. ORION stated that although many of the Brown Mountain reports were of mundane objects, there were definitely some that could not be. Thus, again, the skeptics fall into two classes: ignoramuses or liars. 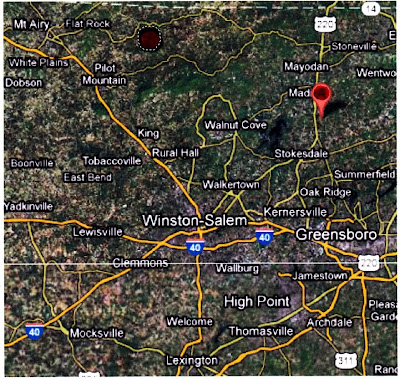 Brown Mountain is far from alone in the state. The Brown Mountain area is the dark oval surrounded by the dashed line in the map above. To the East, at the Google map marker, is Gold Hill, about 20-25 miles as the anomalous light flies. Gold Hill has its own lightball phenomenon. 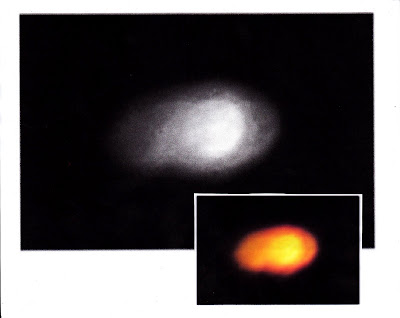 Although the photo above is of an Ontario lightball taken from a published presentation by the outstanding researcher Massimo Teodorani, it is nearly identical to a series of photos taken of the Gold Hill light phenomenon by Wayne Laporte, a very good UFO researcher from North Carolina and someone that I have also interacted with successfully in the past. Laporte is a researcher that I also respect as an honest man, and a good reporter. He admits that he was fortunate on one visit to Gold Hill to attempt to photograph the lights and got multiple shots of two [at least] of them. [I apologize folks for not putting Wayne's own photos up here, but, as usual, it's the "me in Wheeling; stuff in Kalamazoo" problem. Wayne's photos are quite like the Teodorani photo, just a bit less colorful].
So, I have pretty good, nearly personal, reasons for thinking that lightball phenomena occasionally and unpredictably express themselves in at least two areas of that state. There seems to be a third area, the Thomas Divide Lights near Cherokee, NC which would be also in this same sort of geological terrain. Whether that points to "Earthlights" whatever they may be, I honestly am too devoid of data to guess. 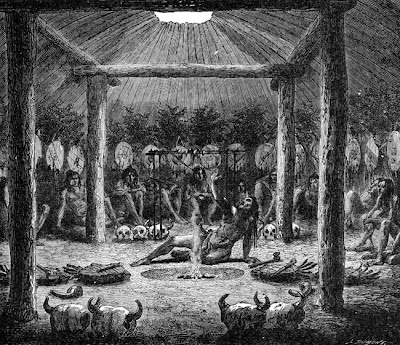 As to "explanations" then: once you get the skeptics 90% pile of wannabee misinterpretations out of the way, you are left with geo-produced natural lightballs, Faerie, ghosts, UFOs, native american spirits ... oh my, where have we heard THAT list before? In part two of this fine fiasco, I'm going to mention some "grass-roots" sightings and just a little more theory --- so be forewarned.
Posted by The Professor at 4:30 PM