RHOLDRWYG: What was it for??, Part Two.

OK. Back to try again.  We have seen our magnificent circle just asking for a theory. Was it, as its old observer Percival Oakley Hill said, a "Temple of the Sun"?

Well, it just might have been. We owe this line of thinking, at least in terms of modern "respectable" thought to the American astronomer, Norman Lockyear, seen above measuring Stonehenge in the latter 1800s. Lockyear is rather a grandfather of all the twentieth century archaeoastronomers who have combed the globe looking for such alignments to the "stars". 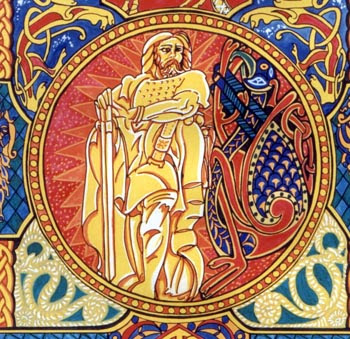 Like Stonehenge, Rollright is just the sort of place to look. One thing of possible non-significance to others but becoming more and more meaningful to me is Rollright's folkloric connection to the druids. These things [ megaliths, druids, rituals, "scientific study" of nature, circle-of-life, order, truth, peace, etc] keep coming together over and over again as I read into this topic. Take the Rollright name as a small beginning. Some people have tried to write it off as a memorial to some Danish king [an almost weird thought]. But Percival Hill knew that the "Rollright" was just crude anglicization for the older local language term. Rollright was previously in Saxon "Rolldrich", "Rouldrich", "Rollendrich". That Saxonization even seems to have made the old Domesday Survey as "Rollendri". But even the Saxon is altered from the older celtic word "Rholdrwyg", meaning [at last some meaning] "Rhol" --- Wheel or Circle --- and "Drwyg" --- Druid. Rollright is the Druid's Circle, surprise, surprise.

And what would our druids be interested in there? Their major god was Lugh, the Light-Bringer, the Truth-Bringer, the Craft-Master. Lugh is so like the Greco-Roman god Hermes/Mercury that it's a bit uncanny. He also is so associated with Light that a British merger of him with Apollo seems to have taken place. Light-on-Earth and Light-of-the-Heavens. And, as Diodorus and Caesar seem to say about Stonehenge, Apollo "comes to Earth" every 18th year in the ceremonies. Lockyear intuited the Stonehenge/Sun relation, and Gerald Hawkins essentially proved it. Stonehenge "cared" about the Sun-god; maybe Rholdrwyg did also.

Is there any hint of this in folklore? Maybe. The legend is that the King Stone moves to the river on one day of the year briefly. That day?: Christmas Eve, the ancient mid-winter solstice.
We'll look for that in the stones shortly. 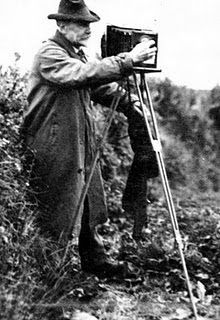 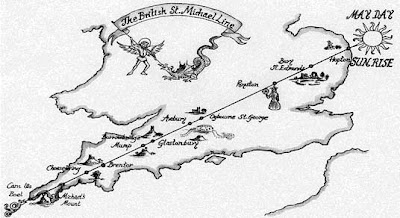 There was another "recent" concept that involved megalithic sites: Leylines. The gentleman above, Alfred Watkins, sort of invented the idea by noting the stunning linearity of the ancient sites as they stretched across the landscape. I instinctively felt that this was just ancient folk not wanting to walk any further than necessary and taking straight-line routes from one seeable location to another. But then someone showed me the "St. Michaels Line" [named after a series of early St.Michael-named Christian shrines, which doubtlessly were built to deliberately obscure the existing "pagan" ritual sites already there], and I began to seriously doubt my initial idea that this was just a pragmatic side-effect of human frailty. IF the St. Michaels Line did indeed extend across Britain, and IF it did indeed point to the sunrise on Beltane, this implied a wide-spread "druidical" culture involving megalithic ritual sites, archaeoastronomy, and intellectual civilization.

Still, that says nothing directly about Rholdrwyg.

But someone wanted to try another means of finding out, and to try it "scientifically" at the site itself.

That person was Paul Devereux, and he was looking for ways to measure with physical instrumentation any evidence of leylines at Rholdrwyg. Above is his "map" of what he thinks that he saw on the ground. The measurements were apparently done with sensitive magnetometer technology and were labeled The Dragon Project. One point that everyone can agree to is that Paul concretely felt that he had measured several linear responses associated with the circle. 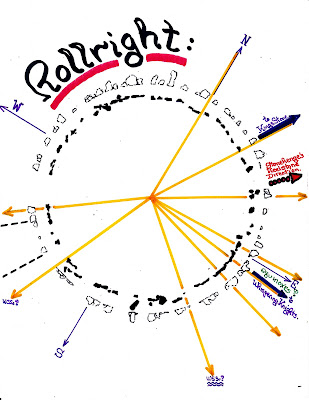 Does any of this mean anything? All I can do is to continue to stumble down the path. So I made a "map". On the survey chart I put the main coordinates, the direction to the Kings Stone and the Knights, Paul Devereux' leyline measurements, and where the Stonehenge direction to the solar Heelstone would be. So what do we have?

Firstly, and most irritatingly, we have the warning ringing in our brains that the Rholdrwyg circle is a very much disturbed site, and that one cannot at all depend upon the placement of particular stones, like one can at Stonehenge. Still, let's plough on anyway.

One thing of interest to me is that the "line" to the Knights is very close to an Equinox line. You always have to measure these things on-the-ground onsite, but the direction is at least suggestive. The line to the Kings Stone is roughly in the direction of the soltice. Again, the on-the-ground measurement would be crucial. This is, by the way because the Earth isn't flat and the horizon is higher or lower in one place than another. Where that occurs makes a difference on the exact direction of emergence or submergence of the heavenly body of interest. Although the Kings Stone line seems "too north" possibly for the mid-summer sunrise [though again one needs to calculate precession of the equinoxes and try to fix the proper direction to look], there is another possibility. Because heavenly bodies go around in circular or very nearly circular paths, their actual relationship with the Earth [especially when looked at abstractly as a flat horizon] is such that a line for a mid-summer solar sunrise is exactly opposite a line for a mid-winter solar sunset. One wonders what would happen if you, the Arch-Druid of Rholdrwyg astronomy and measurer of the Retreat of Lugh, would sit in your high Kings Stone chair and look back across the circle in the evening of "Christmas Eve"? Would you see Apollo/Lugh submerge at that horizon point on his shortest day? Would it be just the night which presaged his gaining strength to bring back light and the Cycle of Life to the land?

I noticed, as did you doubtlessly, that Paul's leyline measurements have lines which point to the Kings Stone, the Knights, and the possible locations of both the Winter Solstice sunrise and Sunsets. There is also one due north. And very close to due east. What is this all about? These lines allegedly radiate out of the center of the circle itself. What? What? What? Are these Paul's mistakes? If not, then this staggers us as to what these people somehow knew. 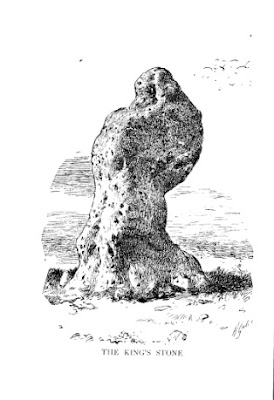 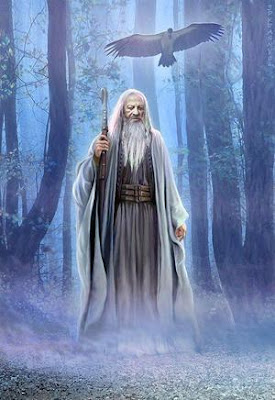 Sitting in that high backed chair, did that old arch-druid not only accurately "see" the year, and bring hope back to the culture, but also, either in that chair or within the circle's center, perhaps in the middle of the famous circular dance, "sense" much more? 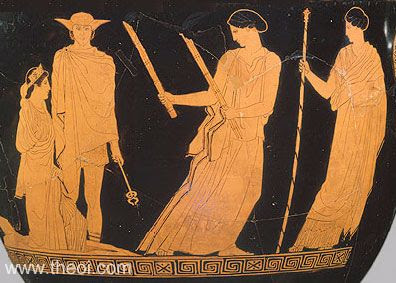 Does the paranormal find entrance here? Lugh was like Hermes/Mercury. Hermes "had the power". He had the knowledge of both physical earth-bound things, and of the things of the spiritworld. [At the left Hermes is helping retrieve a person abducted to Hades as a favor to Hecate, goddess of sorcery].


Could whatever Paul measured as radiating out of the circle 1). be physically real? 2). be biologically "effective" at causing some subtle alterations in the human physiology? and 3). be facilitating of altered states of consciousness? Yes, WAY Out Proctor we find ourselves again.

Out Proctor it may be, but not worthy of simply tossing away, methinks. Let us keep an open mind. I'm reminded that the modern age Sufis use "energetic" whirling dance to achieve altered states and attempt communion with the spiritual. And, on another tack: a resident of the site stated that he had discovered very fine Ogam writing on one stone. The relevance? We recently had a post suggesting that the druids might have used Ogam in a sort of "runic" way to attempt to clairvoy. 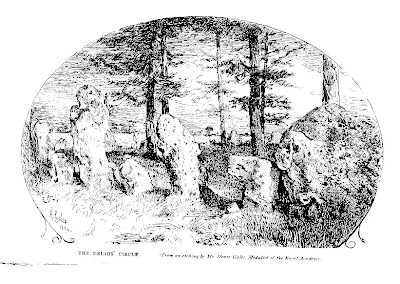 So, what was Rholdrwyg for? How the heck do I know? I'm just some shlep sitting in Wheeling West Virginia reading interesting "forbidden" books and reading maps. Someone needs to get back there and do a lot of serious experiencing, both personally and instrumentally, and write the darn stuff up as intelligently as possible so that those of us who aren't there can get better ideas. 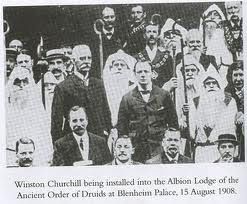 I'm going to give this business on more feeble try in another day or two. Till then, Merry Part and Merry Meet Again.

Posted by The Professor at 5:49 PM