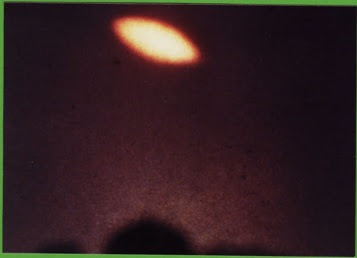 Part two of another strange walk in the dark. One good thing to start with though is that while I was muddling about on this blog's history on BOLs, I stumbled across one of Wayne Laporte's photos of the Gold Hill lightball phenomenon that I'd posted back in 2009. So it sits there above in all its glory. My memory is that Wayne was able to get off more than a half dozen shots of this particular manifestation, and a smaller number of a second one during that research session at Gold Hill. I do not remember the date. It was very early in my active going-to-meetings phase of renewed UFO interest once I became a college prof, so perhaps very early 1980s or 1970s.

What is presented below is on topic but from a different perspective. This may not be good internet manners but I think it's OK. When I was thinking of doing these posts, I surfed about and came onto a website specializing in North Carolina mysteries. They were "doing" the Brown Mountain lights in the entry that Google burped up. It was a good presentation, but not particularly additive to what we generally know... except in one particular: a LOT of people responded to the post. A great deal of these responders were disgusting jerks with nothing better to do with their time than to spew forth cheap shots from the safety of their mother's basement, but several were from people who felt that they had seen the phenomenon or had something productive to contribute. I'm going to present those selected remarks here. 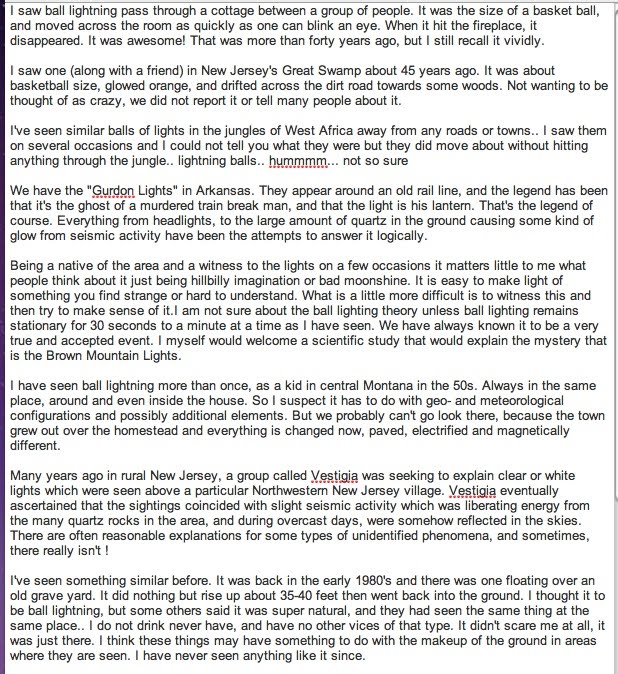 Hopefully you can read the remarks in this first panel [Just clicking on it should do the trick but if not you probably have a "magnifier" function handy on the computer to blow this up a bit --- my own computer is "reading" this pretty well, so hopefully yours will too]. I find many of these remarks interesting in a variety of ways.

Easy to notice is that the posting elicited many reports of having seen this or similar BOLs in locations all over the globe. The comments are calm and adult. Very matter-of-fact. The proper use of the English language [a rare trait in internet posting] points to intelligent persons with a genuine desire to share what they feel is a real encounter. Several people are aware of the ball-lightning hypothesis and some are sophisticated enough to know that this doesn't quite sound like it. Someone even knows about "amateur" but disciplined attempts [ex. Vestigia] to make scientific studies. VERY impressive group of comments. 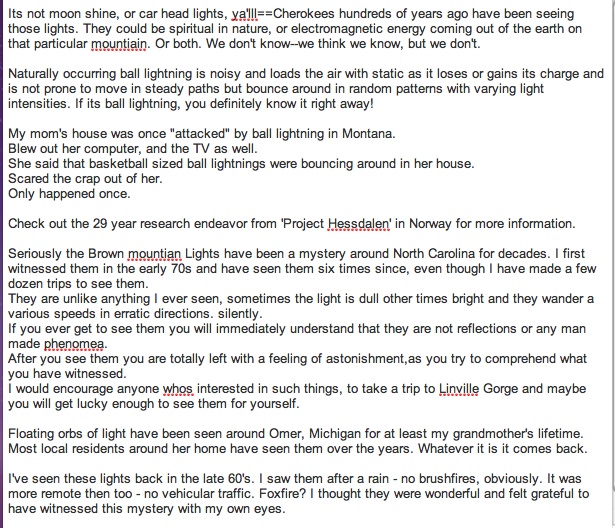 In the next panel of comments are a few specifically referring to witnessing the Brown Mountain lights themselves. One report of genuine ball-lightning occurs, but also another comment distinguishing it from these BOL manifestations. A person knows about Project Hessdalen, and another about the lights of upper Michigan, many cases of which have been seen near the lake for at least decades. Two of the respondents speak, in their different tones, about a possible spiritual element in the experience. Again, the difference between the sensible reporting of these people and the braindead remarks made by armchair debunkers and streetcorner jerks [two varieties of the same species --- one just uses bigger words] boggles the mind. 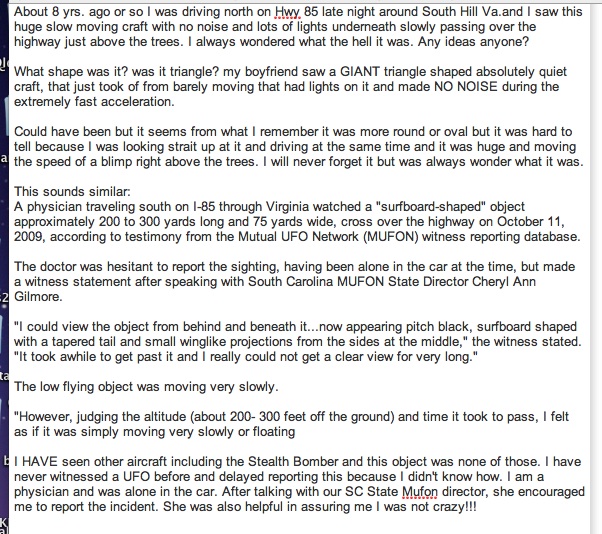 The third panel of comments shows another phenomenon familiar to UFO researchers: get a conversation going [among real people; academics need not apply, usually] about anomalistic phenomena and all-of-a-sudden all manner of people are unloading the "strange encounter which happened to them". This is, of course, the John Timmerman phenomenon which happened to him as he carried the CUFOS UFO exhibit all over the country, and well over a thousand people came up to him to tell him of their stories. J.Allen Hynek always was astonished at how many people at his lectures put up their hands when he asked if anyone had sighted something that they considered a UFO [and how few said that they told it to anyone but family and close friends]. What this SHOULD tell us is that the encountering of an anomalous phenomenon is NOT a rare thing. It might be rare for any individual to have many of such things, but cumulatively we humans are encountering true mysteries all the time. Recognizing this would massively expand the consciousnesses of we human critters as we go about our typically mundane business. 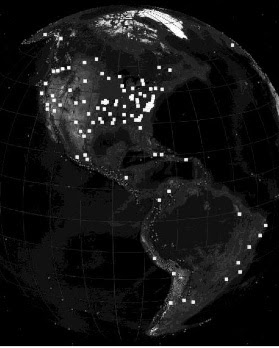 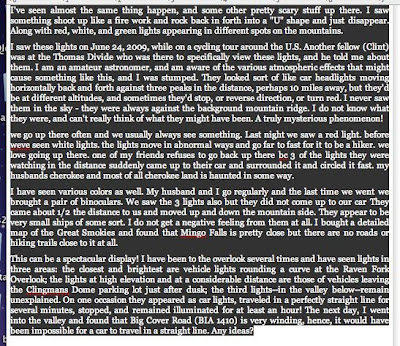 As the map above indicates [this is a part of a map made by Teodorani and published in one of his very informative lectures], there are a vast number of lightball sites known in the Americas, and a great cluster of them are on the East Coast including the Carolinas. Whether de Brahm or his informant saw the mountain lights phenomenon right at Brown mountain or not is pretty irrelevant. Lights happen all around that environment.

The panel to the left is composed of reader posts responding to another regional blog which is interested in ghosts, ghostlights, et al. The particular posting was about the Thomas Divide Lights near Cherokee, NC. Once again, the original posting has catalyzed a flurry of previously unreported incidents of seeing the anomalous phenomenon. These brief descriptions are relative calm, literate, and intelligent, making no elaborate claims. In short, they would be great beginnings for a UFO field investigation, both interviews and on site mapping and precise descriptive inclusion of the environment and its circumstances. Of course, that will never happen. These stories will stay as they are untouched until they are lost forever in the electronic dissipation of cyberspace. So that is where all of the joy falls down.

The internet has been the enemy of real research on anomalous phenomenon because it encourages everyone, witnesses and potential researchers alike, to just "stay at home" and not make the effort to engage in a studied case investigation. The positive aspect of it is, however, that it has broken the psychological barriers to make some sort of report to the outside world. In UFOlogy we have had a saying that every investigating entity needs "an open door". That door needs to be easily seen, and ostensibly sympathetic/non-threatening. John Timmerman was one such "open door". But really responsible open doors are rare. The internet initially killed many open doors by turning the public out of organizations like UFO groups, and allowing "private" isolated shallow personal exploration of things with no sounding boards to maintain sanity, no personal discipline required, and no place anymore to effectively report. Therefore we went into a hey-day of do-nothingism. This has allowed debunking to achieve a nearly unopposed playing field for its misbehavior. Who can oppose? With that, all these matters threaten to become nothing but goofy entertainment, and relegate such real encounters to things that people don't want to talk about.

But now the internet is in its odd ways striking back. It IS an astounding expression of "democracy" and a liberating facilitator of expression. So here we have perhaps more persons being willing to mention their anomalous experiences than ever before.

But how to repair the investigation gap? How can this huge bounty of encounter micro-reports be harvested and the "good" ones competently investigated? We have not figured that out yet. When we do get a system [which will almost certainly need to have the cooperation of many website masters to inquire as to whether their posters would allow a real investigation], we might indeed enter a new age of plentiful data collection. 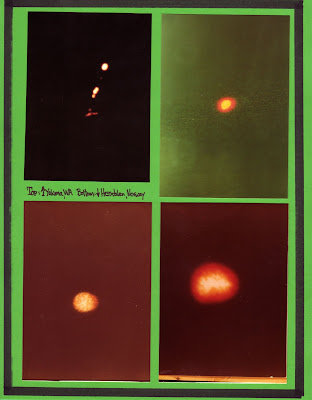 The occasionally-producing lightfields like Brown Mountain, Yakima [above top] and Hessdalen [above bottom] are rarities which can fight off the reporting problem above because the are "prolific". Real researchers feel that it might be worth their time to go there whether they have witness reports to collect or not. We are particularly fortunate that the Italian scientist Massimo Teodorani has been willing to robustly take these challenges on. 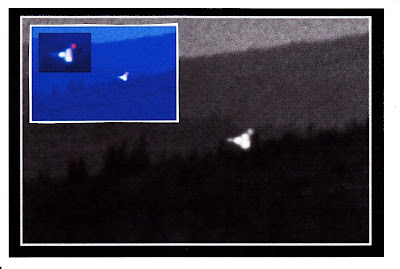 The photo above is of a Hessdalen object from one of Teodorani's presentations. 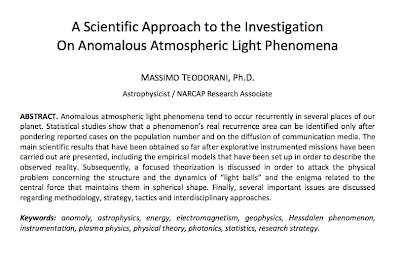 This is the scientist which this field has needed. He has gone to many locations around the US, Europe, Canada, and Australia to set up his equipment and scientifically [yes, the word is used precisely accurately in regards to this] measure what is going on as the phenomena allow.

There is no question, despite anything that debunkers want to claim, that SOMETHING is going on. Teodorani has demonstrated that at least in spades. That something may be purely the product of Earth forces [just geological or some more complicated mix of things], or there may be more to all of this well beyond that. The phenomenon may be part of the conventional plasma physics of the future, but it is NOT in any conventional sense "ball lightning". Whatever is going on, there is a lot of physics involved and some chemistry apparently... that is, there is a physicality to this manifestation, not only photographable, but analyzable by spectral displays. But what really IS it?

With one of Teodorani's lightball pictures above [this one from, I believe, Ontario], I am reminded of an old blog posting that I made early in all this business [10/1/09]. The posting was reflecting on the close encounters which people were having with BOLs--- not at famous lightfield locations, but the sorts of reports that find their way into the UFO files. These reports seem extremely germane to the lightball "solution". The UFO literature is much "closer" to these BOLs than the typically long-range sightings at Brown Mountain or Hessdalen. And the "action" seems different when one of "us" is nearby.

This may be BS, but the BOLs seem much more "perfect" when we are near --- perfect spheres rather than flexible blobs are the norm. What might that mean? Your guess. Also, the BOLs seem sometimes like J.Allen Hynek's randomly "meandering nocturnal lights', but sometimes their "meanders" are not random at all, but seem to be directed or purposeful. THAT of course sends us immediately WAY Out Proctor. [As a side thought: the "nocturnal" part of this may be just the ability to see them at night, not that they are only out at night --- they could be flitting all around in the day, too dim to really notice]. The title for that 2009 blog entry was: BOLS-- Curious, Mean, or just Brainless? And THAT is the $64,000 question isn't it?

Are BOLs made by a complex of just right conditions in the Earth and the atmosphere and that's all there is to it? Or when these areas of force and light and gaseous substance do manifest, do they provide some kind of opportunity for someone/something else to "jump in" and "drive about"? Manic Musings? I suppose.... 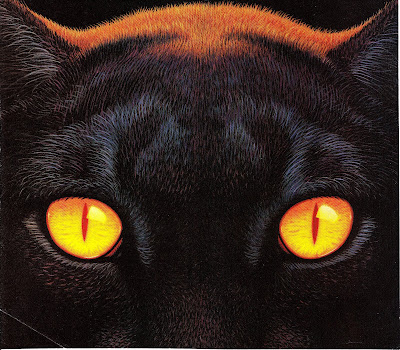 WHO or WHAT is really behind those orange balls of light??

Posted by The Professor at 5:31 AM