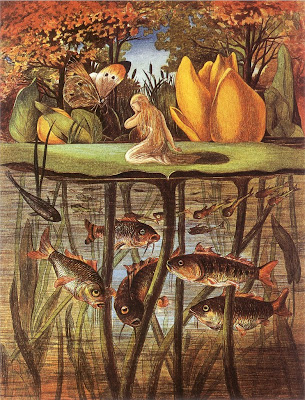 Hello again, folks. I'm back in Michigan but who knows for how long. Mother is reaching a critical moment, as my relatives can no longer take care of her in their home, and no other family member can either. So, it will be a professional care facility... a very good one, but nevertheless.... This has not quite happened yet, but soon. How disruptive it will be is an experiment that the Universe is beginning to run. But, to try for some pleasant distraction, and maybe even do someone a little good, I'll throw a blog entry out there.
This thing was stimulated by the happy accident of a new friend [a rather off-center old-time bookseller] attempting to preserve some old publications from the library of a closing Catholic school, and offering them for sale. They were old bound magazines mainly from the 1860 to 1910 era. As I like that old stuff, and share his desire that it be preserved, I bought the lot. There were several types of journals, including things like Scribners, Atlantic Monthly, and Littells Living Age. I thumbed through a couple not expecting to find much actually, but stumbled upon an excerpt from a book called The Peacock's Pleasaunce by "E.V.B.".
EVB is Eleanor Vere Boyle a very accomplished children's fantasy book illustrator of the latter half of the 19th century. One of her paintings is at the top of the page. She was also a writer and a master gardener. In The Peacock's Pleasaunce she wrote about her experiences in the estate, gardens, and woods nearby. Most of it was "charming" but fairly ordinary. But within the rest of the stories, she had four tales right up our alley. 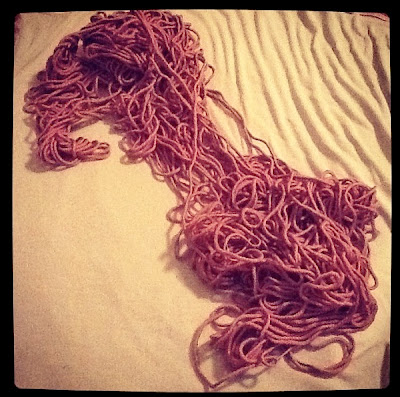 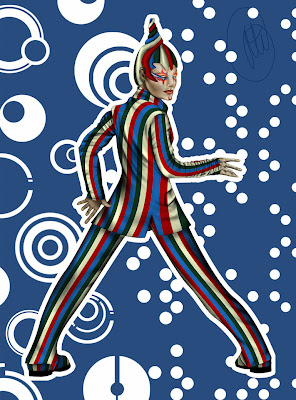 The first of those tales involved a ball of string ... or was it?? [This story, by the way, has a confusing status. One cannot readily tell from the way it is written whether EVB intends it as a mere reverie that she is imagining in the garden, or whether this is a remembrance of a tale told to her by real people and which she is vividly replaying in her mind. There are legitimate reasons within the tale for believing either: it begins reverie-like but ends with detailed non-reverie comments about the family involved and the site. So.... who knows?].
EVB tells the story this way: a father and daughter were at home at night, when the daughter decided to retire, going up a familiar but unlighted stairway. As she ascended, she continuously felt impeded about her feet and ankles by string or yarn. She tugged at it until reaching the top of the stairs where she could turn on more light. Here was pink yarn all about the stairs entangling her. She went about showing her father and ripping up all the "foreign" yarn and balling it up. She accused the servants of playing games, but, given their character, that didn't make much sense, and they denied any such tomfoolery, which was, in any sense dangerous on a stairway. Still angry about whatever this was, she put the ball of yarn into a cupboard with a lock on it.
Shortly she and her father went temporarily away and the cupboard was left locked. When they returned three months later, she remembered the strange affair, and went upstairs to fetch out the ball of yarn. It was gone. She had kept the only key with her the whole time she was away. Everything else in the cupboard was just as she remembered leaving it.
This whole business shocked her. She refused to take things like "little people tricksters" into serious account, and was left making up even more outlandish hypotheses. She decided that the pink yarn must not have been yarn at all, but some strange thing alive. It had flexed and shrunk and wiggled its way out of its confinement. All that despite that it had exhibited none of these requisite properties when she was ripping it up, and handling it.
For us on this blog, the incident, if it really happened, is classic tricksterism. Despite its weirder context, it is exactly like what my sister experiences all the time at her home, except that her stuff "magically" reappears in precisely the places where she had already [obsessively... don't tell her I said that] checked multiple times. 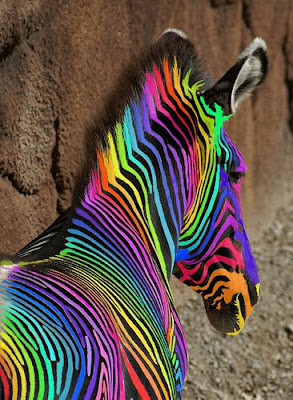 So, to the second encounter: In this one EVB tells of someone searching for his stray sheep getting far afield in the place she calls "The Haunted Wood" and there sees the following.
"A long procession of wild beasts passed silently before his eyes --- elephants, tigers, giraffes, camels, lions. He watched them as they filed on, turning neither left nor right, faring north between him and the clear, cold skyline. And all those living creatures, half transparent and wholly rainbow-coloured, seemed as though they were but appearances of painted glass, like moving colours in some old church window; violet and blue and amber and fire-colour."
EVB hints that the shepherd died within about a month of his encounter. She also said that she had heard of a person on the Isle of Man who had the same vision, but this inside the house. She felt that these visions shrouded some inner "living force" or "secret power" within the animals in the procession, but goes no further.
I have absolutely no means of gauging what could be behind such experiences. Denizens from "The World Alongside"? or "just" human hallucinations? 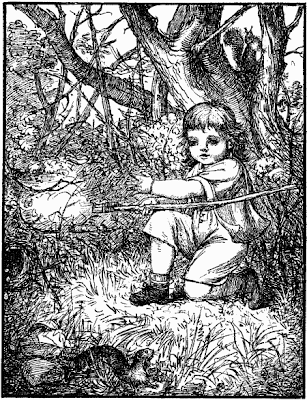 EVBs third encounter tale involved the American poet and essayist James Russell Lowell. She was sitting in her garden near her wood and was feeling the living "magic" of it, when the story that Lowell had written of an encounter that he had in a [to her] similar forested area in New York. He was walking at the forest's edge when he passed what he took to be a normal "homestead" nestled in the woods. It was like a small neatly kept farmhouse with clean utensils and pans and dairy gear sitting out to dry, but no one to be seen, despite the open cottage door. There was even a clothesline full of hanging laundry. Lowell simply passed by, but suddenly had a strange feeling of the Uncanny. He turned about to retrace his steps, but the cottage no longer was there. He never could find it again. In the town, the locals knew of this .... whatever it was .... and could recount a few who had seen the vanishing building, milking accoutrements and all. Lowell referred to it as The Witch Farm.
This is the peculiar sort of thing that we see all about the paranormal landscape, and even encroaching into UFO files as well. In fact, I have several cases in my files, which I believe better fit the "phantom parallel reality" slippage model much better than a simple old "UFOs did it" claim. These sorts of things also seem like the Phantom Hitch-hikers to a degree, and my family's stunning Helen Lane case. Certain experiences where the rates-of-time-passage between being-in-the-zone and back to normal reality seem a lot easier to imagine with some kind of slippage between close-twin natural settings than with UFOnauts manufacturing near-perfect Earth copies, or even just messing inside our minds. 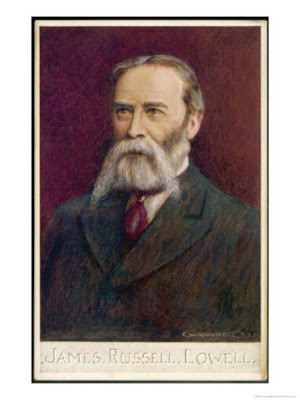 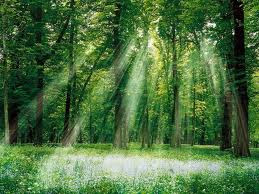 The fourth and last of the EVB tales was her own experience of wandering in her woods and, while following a "wide-winged silvery, pale-green moth" [hmmmm.... I wonder], went up to where the moth had landed on the underside of a leaf, and pushed up the leaf to see it better. Instead the nearby branches shifted and just beyond them was a surprising clearing like a perfectly naturally arrayed garden more or less circular in shape. A mist seemed to circle it about, but the Sun shown down gloriously on the brilliant display of flowers. Then, she stepped inside. The mist rose and closed in upon the garden so densely that she no longer could see it. In fact, she was forced to retreat quite a way to get beyond this mist, and once things seemed normal could not find that garden spot again.
We have read of the passage across the "barrier" to some other natural space several times before on this blog. Ron Quinn passed on two cracking good cases of such in his book about upper New York state Little People tales. Diarmuid MacManus calls the phenomenon The Stray Sod. Whatever's going on here, it doesn't go on nearly enough for my romantic tastes. I wouldn't mind being able to slip back and forth between this hard old reality and those beautiful gardens, woods, mountains readily.
But, seriously, I think that "what is going on here", despite it's regrettable rarity, IS IN FACT GOING ON. Were all these tales by EVB just reveries? Maybe. Some didn't read at all like that though. But even if they were, we have plenty more to bank on. What then IS this? It doesn't feel at all like UFOs or any other "this universe" type of phenomenon. It feels like Loch Ness Monsters, and Faerie encounters, Mothman, or Pookhas. It feels like a door briefly opens and we go through or something comes in. We and those somethings are not alike. We are obedient to the scientific textbook laws; they are not. When we or they pass back across the boundary, neither of us leaves anything "material" behind. Footprints on the sand. That is all. 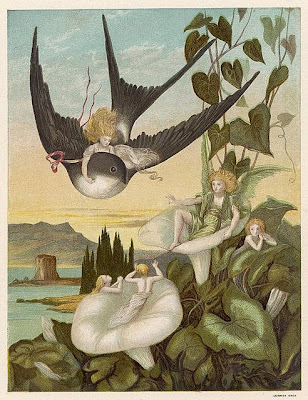 And what did EVB believe?? Let's see .... what was that she was always making paintings about??
Posted by The Professor at 2:51 PM