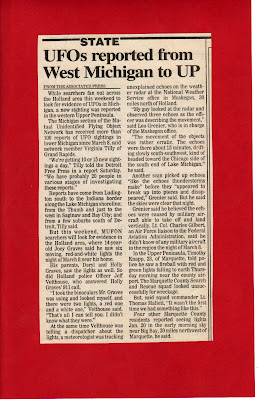 Well folks, the blog controllers have decided to mess around with their technology and have managed to produce a system which so far maximizes the unpredictability of what I'm trying to achieve with illustration placement and the ability to type around the things rationally. In fact basically everything that they have suddenly sprung on here "new" is creating some form of unexpected response as in contrast with the way it used to work. I am going to try to create a blog entry regardless. 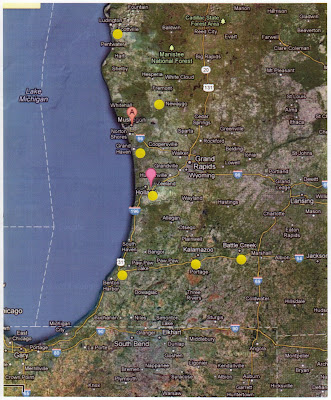 This entry if it ever sees the light of e-space is supposed to be about the Holland, MI radar case. That case is the only true UFO case of which I ever participated in an investigation. It surprised me when I searched this blog and found that I apparently never told the story. So, here goes.

The newspaper article at the top is one of probably hundreds which reported these events, and as you veterans know, it made international news due to the involvement of the Muskegon MI NOAA radar station which watched odd things on their scope in real time, all the while being recorded by the 911 operator in Ottawa County.

The map at the left [at least I hope that it ends up somewhere in the vicinity] shows the approximate locations of the NOAA radar station [at "A"], the most famous of the observations [by the Graves family, at the pink dewdrop], and several of the other reported sightings, marked with yellow circles, all of which were reported as happening at or VERY near 9:30pm. Rather astonishing. And I believe a little known fact about this case. It was as if Western Michigan "lit up" with UFOs at the same time. 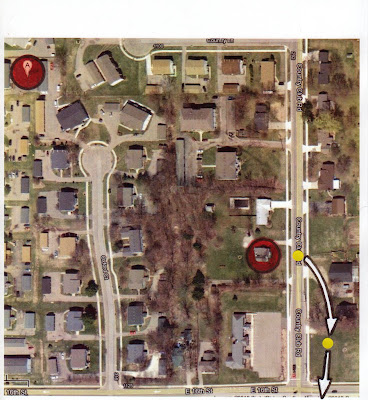 When these first calls came rushing in, the 911 operator thought that the hullaballoo was worth notifying a police officer to respond, and he, officer Jeff Velthouse, drove his squad car over to the area of the first two callers. The map above shows the area he went to. Both of the first two callers resided in close proximity to one another. The famous callers, the Graves, are located in the house surrounded by the red color; the "unknown" caller, Troy Prince, lived in an apartment marked with the dewdrop with the "A" inside it. The yellow dots indicate the position of the UFO at its closest to the Graves' home.

It is hard to count the number of the ways in which this case was botched. Some of it was understandable; some not at all. The most understandable initial botching was when officer Velthouse was going over to interview Troy Prince, he got a message that if he would instead go to the Graves' house, he would see the UFO for himself. This he naturally did, and seems to have never gotten back to Troy Prince. This is hardly Velthouse's fault, as UFO field investigation is not his job. It IS the "job" of UFO field investigators and they roundly blew it. Fortunately, enough "good stuff" was collected anyway, so that the case became strong, despite the UFOlogists' best efforts to bungle the entire affair.

The Graves family were thankfully interviewed by a MUFON operative and a set of pretty good field reports taken. Weirdly, though the primary field investigator did his job, the reports were never really utilized. For instance, there never appeared any such illustrations of what the various family members saw, as I have extracted from those files and give you on the left [I think the left, this thing is acting up unbelievably]. [At the moment, it won't even give me a preview so I can see if any of this is making spatial sense]. Also, the "maps" of the local area of the Graves and Prince sightings are never constructed and published by Michigan MUFON HQ. [ I must say that this occurred unfortunately before the time of my good friends Bill and Linda Murphy as leaders of Michigan MUFON, As they were of the highest competence and we would have had an even more lollapaloosa of a case than we do. Still, we have a lot, almost by accident, to make this thing a classic of mystery.

Whereas we have a lot to thank the initial MUFON field investigator who interviewed the Graves, praise is difficult to pass out elsewhere. AND as I hinted, I am not sure that the most significant corroborating witness in the whole affair, Troy Prince, was ever interviewed in any orderly fashion. At the least, I have never seen the field report document, nor have I seen where such information has been published. The only published thing that we have from him comes from the 911 dispatcher, who says that Troy said "We are seeing four lights going back and forth. It's a circle of lights and they split apart leaving three, split apart leaving just two. Then they are like a 'V'...."This is actually quite good confirmation of the Graves' drawings above, as it sounds like a person witnessing a slightly tilted disk which spins and you can't see all the lights at the same time. Imagine how solidly firmed up the close encounter would be with a good disciplined report... AND note that Prince says "we" --- multiple witnesses again. It is this close encounter which occurs right within the explosion of other cases and the radar witnessing, which takes this case far beyond any simple explanation. That the primary documentation was either never even gotten, nor when it was, was never promulgated and analyzed, ranks among the criminal incompetencies of our field.

Below is the expanded map which I've made to illustrate the close encounter piece of these experiences. The Graves' son spots the thing first right in front of the house over the street. To him it manifests as a circle of five pretty colored lights. His sister rushes out and sees the same manifestation just slightly further away across the street. Mrs. Graves follows and sees the circle of colored lights spinning, which she feels are mounted on an object. The object is still very close at that time. Finally Dad gets out of the house and sees a circle of colored lights moving down the street. He also believes this to be a solid object. By the time Officer Velthouse gets there, and even though this initial motion has been like a slow cruising, the thing is fairly far away and he basically sees just two lights, or perhaps it is just two at a time. It is still plenty of corroborating testimony to make it all stand up. Our "credibility" is very high, and our "strangeness" quite high as well. 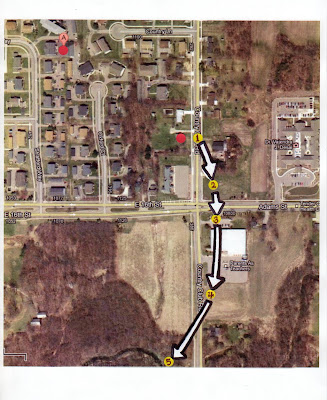 The case of course was rocking and rolling elsewhere in MIchigan at the same time which then led to the famous NOAA radarman's contribution and the excited tape recording which went worldwide almost instantly. All this was nearly botched completely by the media and the UFOlogists as well. The "circus" of both uncivilized media people, some poking cameras into witnesses' windows, and UFOlogists suggesting to witnesses that they were probably abducted, produced an atmosphere where pretty rapidly almost no one wanted to be bugged about any aspect of the case, even if the request came  from a responsible reporter or investigator. Muskegon's Mike Walsh was one such excellent reporter who got some information, which he used responsibly and intelligently, but who ran into stone walls due to the idiot element of the scene.

I'm going to pick the story up in a day or so, with the radarman's tale, how CUFOS got involved, and thereby how I did. It will be, in part, a true "inside the radar-room" account of what actually happened there, and a few other things as well.  Till then folks.
Posted by The Professor at 2:10 PM