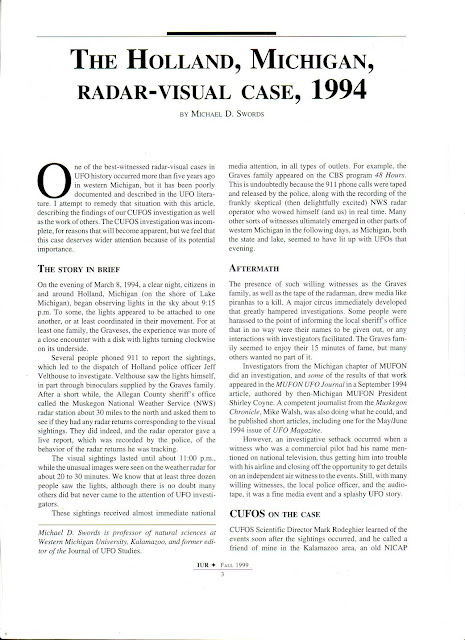 In part two of this legendary saga, I'm going to try to sketch out how CUFOS and I got involved with the case. That involvement ultimately led to the publication of our findings in the article in the International UFO Reporter above. Those findings encompassed only a small, albeit vital, portion of the case, as other investigators allegedly were getting the mass of the on-the-ground fieldwork data. As said in part one, it turns out that those "other" researchers were either NOT getting the fieldwork data or that data was never utilized and promulgated to the rest of us. We didn't know that at the time, of course.

CUFOS got word of this explosion of UFOs over Western Michigan at about the same time that everyone else did, but CUFOS was by that time in its history no longer an organization which did onsite fieldwork except in very special circumstances. Still, CUFOS Director, Mark Rodeghier, decided that this one sounded like we should at least we should dip our toe in the water. He knew that I was not a field researcher, but that I had a friend, an old NICAP member, who used to do that. So that's who he called. My friend began looking into this.

It was instantly obvious that a chaotic circus had immediately commenced. Witnesses, other than the Graves family, were being assaulted in paparazzi fashion and being turned off everywhere. The 911 operator told my friend that he knew of a few witnesses who had seen quite a bit, but who had told him that under no circumstances was he to let out their names. One guy was an ex-USAF colonel who lived south along the coast and who would have been a superior addition to the story. But no way.

The NOAA station manager had told everyone flat that there would be no interviewing any station personnel especially the night operator who took the 911 call. They wanted none of the grief. My friend made contact not only with them [briefly] but went on to talk with NOAA HQ in Washington DC. He made a good impression. Ultimately they called him back and said that he could have the only interview with the staff, BUT he would have to bring that WMU science professor with him when he came [he'd played my "PhD card" to them over the phone]. So I was stuck with a field investigation if we wanted access. 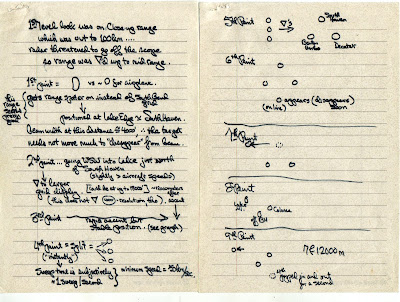 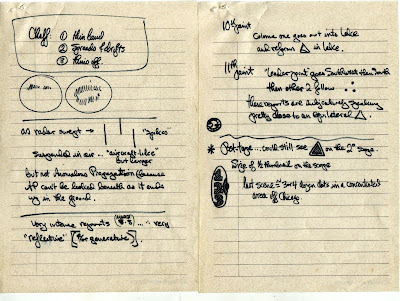 So, off we went to Muskegon. The manager met us at the gate --- extremely nice, friendly person. With the allegedly responsible University Professor aboard, he was delighted to show us the facility. And that he did. The young man who operated the radar that night was there to guide us through the action, and to show us the operation of the radarscope. He was extremely competent, demonstrating the sorts of signals that one gets from planes, weather, anomalous propagation, how the height finder works, and exactly what he did that night. We went into a chart room where he could put a map up on a large screen and point out blow-by-blow how the blips went. I sat there making notes and mini-drawings as you see the "artifacts" of the event above. 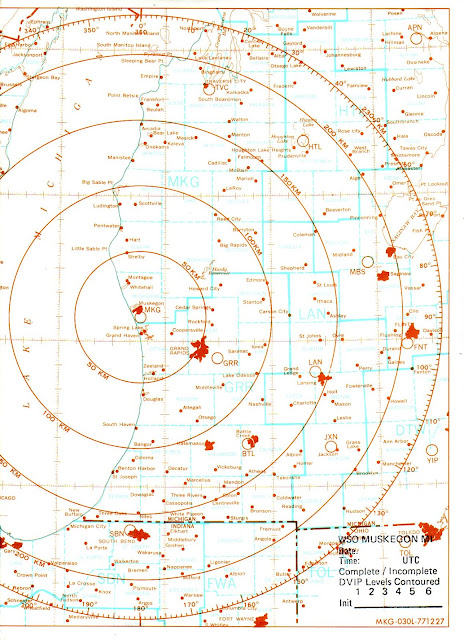 The station manager watched me making my mini-drawings and said "Wait! We can make this better. Here are some blanks that we use; make a set on these and you take them with you, and we'll make a set of copies for NOAA's files". That seemed both highly cooperative, useful, and reasonable all around, so that's what we did. I am going to possibly overkill now by posting all nine of the maps of the radar returns that I made. Some of you can just flip past this, others might find the moment-to-moment action fascinating. The shapes and the positions and the sizes are very accurate to the young radarman's experience --- he checked them all. Obviously pay no attention to the color as that is just my way of making the blips stand out --- the scope does not include color. [What you're getting here, by the way, are scans of the duplicates that I kept when I sent the originals to CUFOS. NOAA as said made their duplicates just as we finished there. My copier was fading at the time, so this first map is blurry but things sharpen up as we go.] 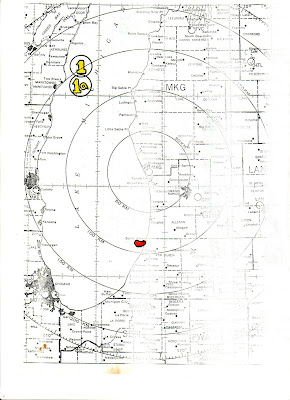 The first successful sweep is mapped above. He sees a large kidney-bean-shaped return near the coast at about the right distance and area [South Haven]. The kidney bean is more than twice the size of a typical commercial airline, but has a hard return as if composed of something as radar reflective as metal. 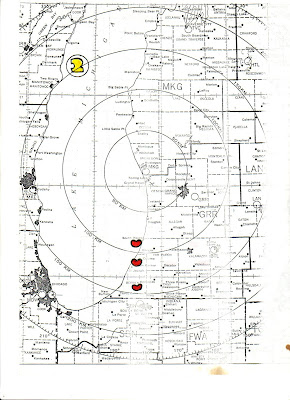 Suddenly, in about one second, the single blip manifests as three. These have moved slightly WSW, still in the South Haven area. 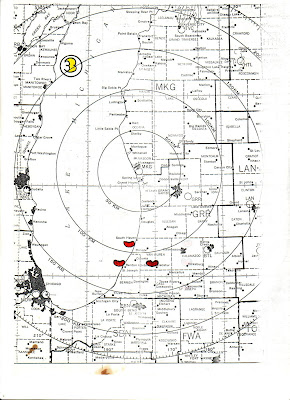 Rapidly the array turns more to a triangular positioning, and ascends to a significantly greater height. 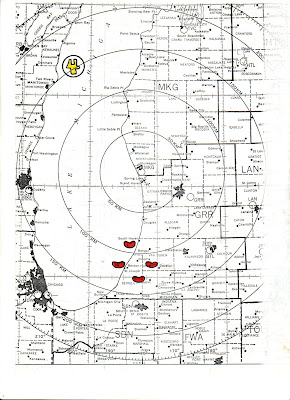 A fourth blip manifests, more or less in a diamond array [these "objects" are, however also at different altitudes --- you are only seeing the array as viewed from above --- so the "diamond" would be a three-dimensional thing rather than a flat-faced piece of geometry]. 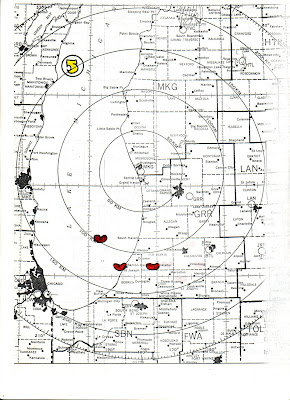 The top object suddenly "jumps" out over the lake, while the bottom object seems to vanish. At this point sanity seems to have left the building. The bottom objects are now over Benton Harbor and Decatur Michigan. 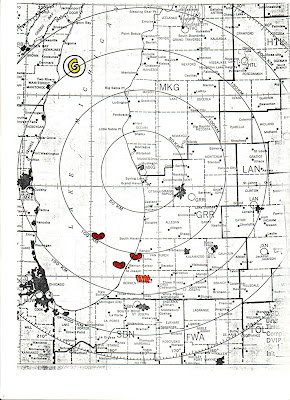 The top object goes further over the lake and the other two seem to chase it to catch up. The fourth object re-flickers back into existence, just popping back in for a second, and gone again. 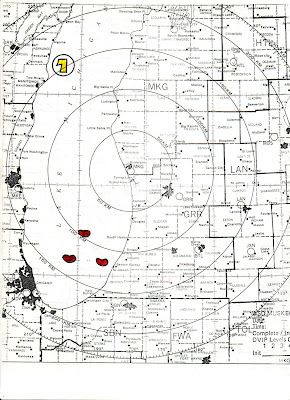 Now the triangular array seems re-formed, all well out into the lake, having moved at great speed to get there. There were a couple of "paints" that I didn't map, but which show the trailing two objects chasing the "leader" to reform the array. The trailing two don't necessarily move to re-form at the same time. 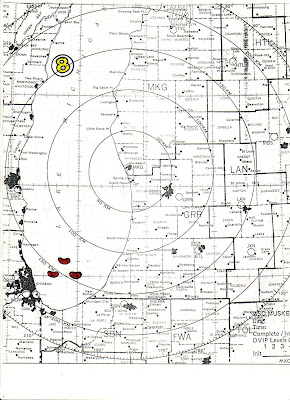 Now the leader jumps again to the south, and the remaining two jump again afterwards to reform what was to the radar operator pretty close to an equilateral triangle. 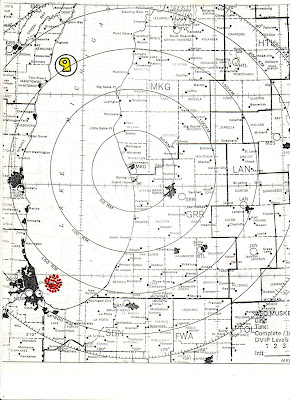 The last of this madness may have been the strangest as the objects disappear to be replaced by a beehive of small dots in a concentrated area in the lake off Chicago. The operator had seen radar-interfering Aluminum "chaff" deployed before, and said that this was not at all like those returns. Then, the scope was empty of even the beehive. 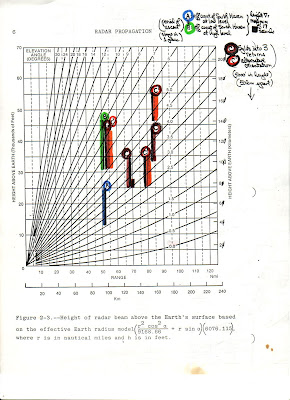 The operator also showed me what his height-finding radar was manifesting that night --- I've drawn colored bars on one of his blanks to show that above. These things gave back "spikes" which stood as if suspended in the air, but which terminated quite high [unlike anything which anomalous propagation would do.] There was a sudden leap in height from 25,000' to nearly 50,000' which occurred at the most in 17 seconds. So the return gained that altitude at roughly 1100mph. Some of the lateral jump speeds seemed greater.

So, smiles all around, we left the station with what seemed, and still seems, some first class testimony for a magnificent mystery. We stumbled upon some people from WMU shortly afterwards [student pilots, and a geology field trip group --- the assistant professor of the geo-group happened to occasionally sit by me in Church] and they told coherent and supportive tales of lights moving on high in good time concurrence with what might have happened just after the Chicago "disappearance".

We waited a long time to see the MUFON report in print. "Part One" came out in the Journal, a fairly intriguing but shallow presentation, but the promised "Part Two" never appeared. We waited longer to see if things would ever settle down so that the USAF Colonel would be willing to talk to us, but no. The sketch below shows how valuable his testimony could have been, as it was well possible that he was directly beneath the phenomenon when it suddenly leapt strait upwards. In the end, I finally gave up and wrote up what you've just read for IUR. 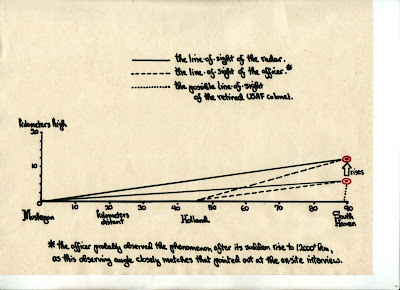 Part three of this current series, if I ever make it, will cover the aftermath of this thing, which included some "sociology" which was almost as weird as the encounter itself. Till then.