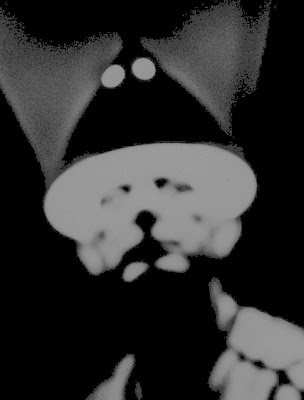 This will be my final swing at this case in this series at least. This entry is not about the case as much as it is about human beings and how we can be semi-hilarious in the ways we goof things up. I might have entitled this part the whacky aftermath. 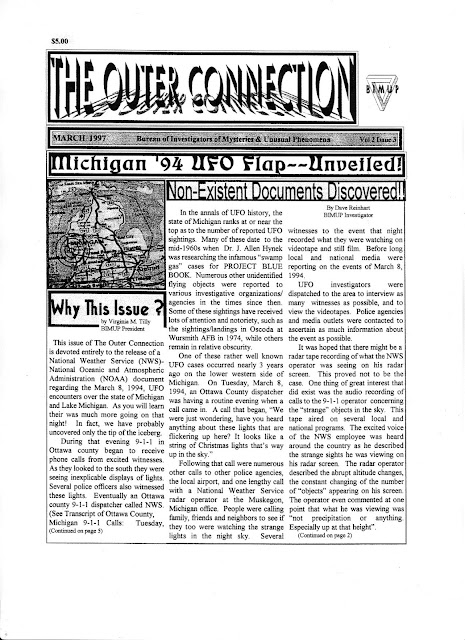 Sometime after the actual event but prior to CUFOS finally giving up on the hoped-for second MUFON Journal entry or the possibilities of interviewing calmed-down potentially key witnesses, I was sitting in my home in Kalamazoo having an ordinary day when a nicely done small Michigan-based newsletter showed up in the mail. On the front page was a very interesting headline: "NON-EXISTENT DOCUMENTS DISCOVERED!" Since these documents were associated with the Holland Case, this was a bit riveting. Some relatively unknown UFOlogist had done a very reasonable thing. He had been asking the USAF for any report that they had made about the incident and finally, having got nothing, formally FOIAd them. Result? Release of documents!! Hurrah!! 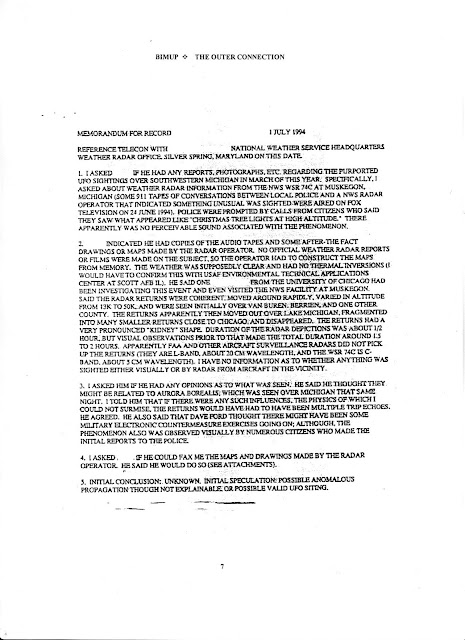 Turning into the newsletter I found this. It was a memorandum for the files concerning this FOIA. The USAF or at least the office which fielded the request, had nothing to send. BUT the officer contacted NOAA DC HQ and asked them if they had anything. Records were sent and then on to the UFOlogist.
I still wasn't on-board as to what I was reading and avidly turned the next page. This is what I saw: 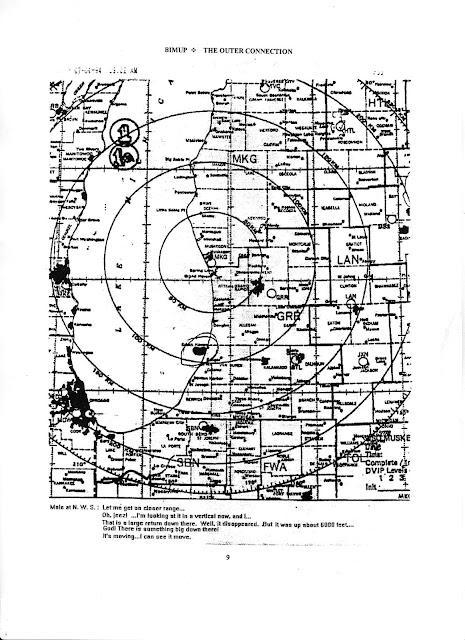 The chart looked eerily familiar. I turned more pages and page-after-page these USAF secret documents looked like ...... Until my brain settled down and got a grasp on the situation, I thought --- no, I wasn't operating on thought much at all --- I felt that I'd entered some bizarre reality where USAF secret documents somehow paralleled my own. Now WAIT A MINUTE!!! After a few moments I finally snapped back to sanity and said: These ARE my documents!! How-in-the-heck did THIS happen??

Well, I'd forgotten that the Station manager had kept a duplicate set. I hadn't thought that naturally he'd have sent his file sooner-or-later to NOAA HQ. When the USAF officer called NOAA for documents on the case, there they were to send over to the USAF and on to Michigan. Well!! I'd never made secret documents before and participated in a government conspiracy, but by gum I'd gotten my chance and come through admirably.

All that was a bit of hilarity once it sorted out, but I never could get the newsletter editor to get the "problem" straightened out. Somewhere someone still believes that these are secret documents. 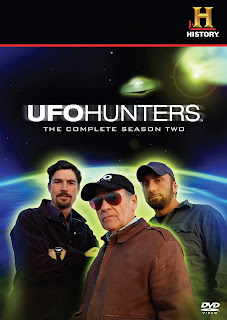 The second odd bit of sociology involves these guys. The UFO Hunters wanted to do a program in which part of the show was the Holland case. They asked if they could come over and talk and film --- I as the old science prof would at least add some street cred to the film.

I'll make this as brief as possible. They rolled in with three vehicles and took up most of the day [no pay, of course]. They accessed my files, I talked to Pat Uskert [the scruffier guy to the right, and in my view easily the sharpest and most civilized of the bunch] at length and explained the case. They re-arranged my garage, moving about heavy items to form their desired filming space, and we filmed a few minutes of tape. I suggested to them that they had an opportunity to actually do some useful UFOlogy here by correlating on-the-ground witness testimony to the radarman's information. They used that line on the air, BUT INSTEAD JUST "CORRELATED" MY DRAWINGS MADE AT THE STATION WITH WHAT THE RADARMAN SAID!! DUHHHH!!!! Naturally they correlated perfectly... Good Lord save us!. But boy did they brag that up on the episode. I have no idea as to whether someone had a complete brainrot moment there [but I don't think so; Uskert is way too intelligent for that] or if Bill Birnes just decided to go with a manipulation of the truth. And I have no faith whatsoever in the as-advertised MIT scientist, as he said on one of the shows that you need THREE simultaneous observations to triangulate something, whereas bonehead geometry shows that you only need two.

But happily they drove off, leaving abandoned paper trash from their lunch all over the place, other debris in the back yard, and the heavy cabinets they moved not moved back into their place. But they were a happy jovial lot of adventurers.

So that finishes MY Holland adventure. Some very good. Some very whacky. Generally a lot of fun and good old tales to tell nieces and nephews. Hope you enjoyed them, too.

I'm back to WV in a day. Don't know how quick I'll be able to address the blog again, but I'm not giving up on it yet.

Posted by The Professor at 1:33 PM