Can we learn anything from UFO Photos?, part six. 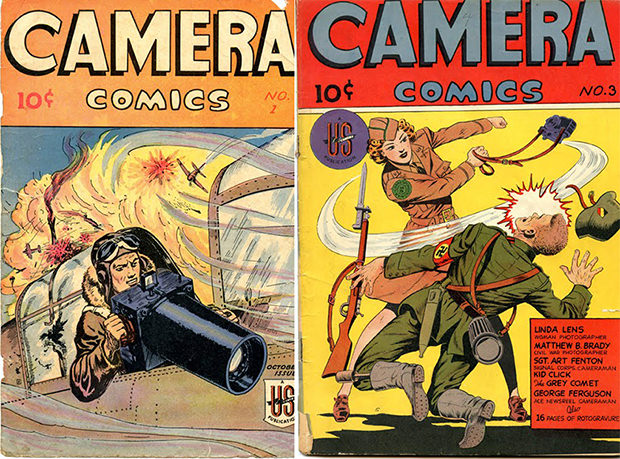 There are tasks which even Kid Click and Linda Lens find their skills inadequate to solve. Filming UFOs so as to answer the great mystery is certainly one of them. But although we're not solving the whole of this thing, in my opinion we are answering/substantiating quite a few particulars. Almost with clear certainty, I, at least, am finding that certain film shots [regardless of quality] are significantly supporting the narratives of many incidents. Most significant of these are the military and scientific experiences. The fact that a couple handfuls of such filmings took place and entered the intelligence community records tells me that our best observers were in fact seeing just what they said they were seeing. By a relatively easy expansion of this finding, I have great confidence that a great many non-military and non-intel-community observers were seeing exactly what they were reporting also. The mere fact that any filming of these things can happen, means to me that there is no a priori reason to doubt that many filmings can.

And, these descriptions and crude images which go with them seem to say to us: "Flying Mechanisms"..."Disks"... "something physical up there". And: "we can't do this". People are afraid to really take the step of commitment to the view that by far the strongest hypothesis associated with the UFO mystery is that it is a physical reality, it is technology, and we humans can't do it. It can still be a hypothesis. But it is a very strongly supported hypothesis. The film, crude as the images are, adds weight to this. 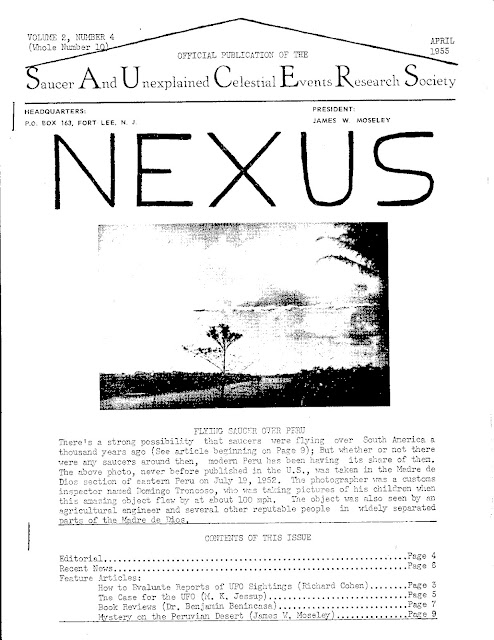 Well, here's a tough one. The data on this thing seems all messed up. I'm going to try to give you my best guess as to what went on here, but mainly this is only a rather interesting picture which may represent a blown opportunity. 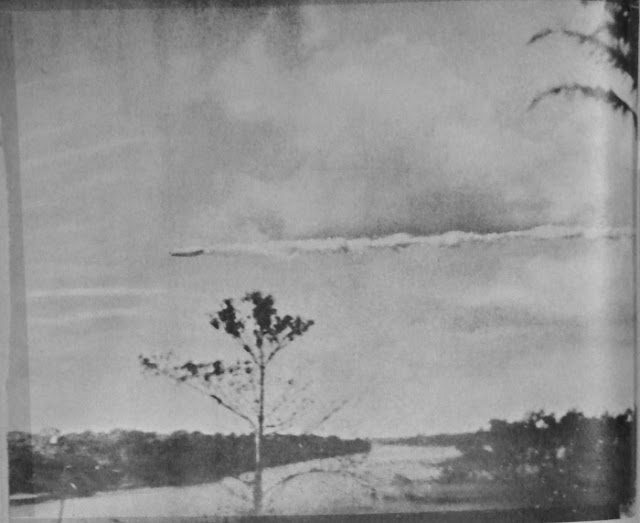 This picture seems to have reached the American public via James Moseley. That fact is almost enough to make you quit bothering right there. Moseley, however, nice a guy he may or may not be, has spent a life fouling the waters of UFOlogy with hoaxes, misrepresentations, rumors, misplaced "humor" ... it has been an almost wholly unhelpful "career" to the field. Well, maybe this is an exception.

In Moseley's magazine of April 1955 this photo was placed on the front cover with the information that it was taken in 1952 in the Madre de Dios section of Peru, which I believe, is near the Bolivian border. The photographer is listed as a customs inspector named Domingo Troncoso. Others allegedly saw the object as it flew past. Basically no other information was given, including how Moseley would have gotten the photo. My own memory of some of the framing information dims, but I seem to remember that Moseley used to spend quite a bit of time in Peru, perhaps collecting artifacts. Maybe he came across the thing on a trip.

I would basically dump the case into a fairly deep graybasket at this point if that were all.

Well... let's begin, reluctantly with what Moseley says. He published the picture in his SAUCERS magazine in April 1955. He stated that the photograph was taken on July 19th, 1952. And this is wrong. Who knows WHY he is publishing the wrong date, but it is in keeping with his style of "contribution" to the field. NICAP, in 1957, hears of a similar sounding rocket-like UFO spewing a dense smoke trail behind it. They remember the Peru case and as Moseley is local, ask him for a comment about it. This comment is published in NICAPs UFO Investigator in fall 1957. In that report, Moseley said that he had met a Senor Pedro Bardi in Lima [no date], and that Bardi had told him that he was involved with this case and that it happened in 1952. At least this much of Bardi's comments is wrong: IF Bardi is talking about the same case. Bardi speaks of a thing going by the window at high speed, and no photo. The thing made a buzzing sound; no mention of a smoke trail. Bardi's object was described as round; NOT missile or cigar-shaped. Moseley then gives the illusion that he obtained "the" photograph taken by Domingo Troncoso, as if this was the same thing. uhhhh... doubt projector on full.

NICAP bought everything that Moseley said [he was in the early stages of his miscreant behavior and they weren't cued in to the need to scrutinize everything he said minutely], and so published the "report" in the UFO Investigator with positive comment, and it later got into Dick Hall's UFO Evidence  with the wrong date and the unsubstantiated connections. AND we stuck with the error still today.

Is there any way to tease out a clearer story?? Probably. I think that I can get us a little closer anyway.

What gives us a minor chance of figuring this thing out is that when the event(s) happened, the Peruvian government got involved. They "read the papers" of the time about several alleged events which included photographs and the Peruvian Air Force did a small amount of investigation. The investigation seems to have amounted to going to the newspapers which were publishing these things and asking them for an explanation. The Minister of Education of Peru was called in to help, and he apparently determined that the photo was taken by a "teacher" [rather than a "customs official"] while on a picnic with his family. The Peruvian Air Force then informed the US Air Attache of the event(s) and the photograph. The attache then sent an Air Intelligence Information Report to the Pentagon, as would be policy. It went to a Colonel Hearn, who is known to be in the USAF Intelligence command structure at the time. This AIIR plus a spanish-language newspaper clipping is what ultimately made it to Project Grudge and into the microfilm.

What it tells us is not a lot. It does fix the date as July 19, 1951 or earlier. It also gives the very strong impression that three different stories of events each with a photo were coming out of the Puerto Maldonado area at the same time. Attache McHenry Hamilton either did not understand this, or the Peruvian officer talking to him didn't. I'm guessing Hamilton is the source of confusion here. The newspaper article tells of one case of a luminous disk trailing thick vapor, allegedly seen five minutes later further along its path. Then the newspaper also claims that a similar craft was seen by 300 people. Finally the paper claims to have received the famous photograph "of the same object", though no photo had yet entered the narratives of the other reports. The attache is then told that there are three separate photographs taken by three separate individuals. The Peruvian Air Force then says that these three photographs were done as hoaxes to sell papers [not theirs, of course].

This stuff makes very little sense to me. The picture however is really quite good. Very impressive missile and smoke trail [some folks even claim to be able to see the reflection of the trail in the water].

One wonders.... did a perfectly honest citizen and his family watch an impressive "missile" rush [horizontally] by, and take one good picture?? Did others in the area embellish that, and perhaps other incidents, with their own fake stories and photos? Is therefore this one photo "good"? We need a man on the spot. There might have even been one. At that time a young Richard Greenwell was living in Peru, getting very interested in UFOs as well as Cryptozoology, and was about to become Coral Lorenzen's first South American APRO reporter. Much later, back in the states, Richard wrote up his Peruvian experiences [among other things] in a spanish-language book which resides on the shelves of the Sanderson SITU archives. I can't read spanish. And nothing on this may be in there anyway. But....

One thing that we can be sure of: Moseley's report is erroneous and for all we know could be completely wrong. Nothing new there.

My back is absolutely killing me today folks... I'm going to leave this entry here with just this paltry piece of history.

Posted by The Professor at 6:13 PM