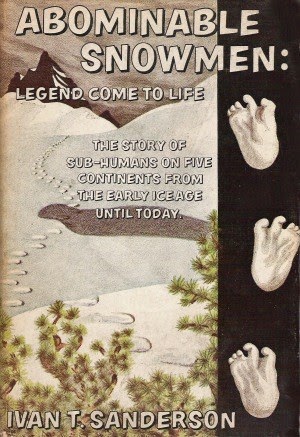 Nothing profound here, folks. This post is just something pragmatic so as to head off possible future internet rumors and hysteria. I'm going to toss out some of the books which came to me in the huge SITU library shipment a few years ago. BUT DON'T PANIC!! The only things which will go are books which shouldn't have been there [as an anomalies library] in the first place.

Why the culling?: I'm moving to a new place in around October, and it doesn't have the luxury of an empty two-car garage. Even though the place is large, I won't have the linear feet to swallow non-essentials and random inclusions. I'm tossing a bunch of my non-anomalistic library too [so far 40 Banker Boxes of my stuff have disappeared.]

What's going to be culled?: The boxes which came to me had a lot of irrelevancies in them. There were many books merely owned by Robert Warth, for instance, which were way outside any SITU interests. Some similar things of Sanderson's were, no doubt, of interest to him sometime in his life, but hardly belonging in an anomalies archive --- ex. an ordinary textbook on microbiology. Nevertheless, I shelved almost all of that simply because I had the space --- against my better judgement at the time. Those sorts of things, and there are plenty, are now going to go.

I'm mentioning this because some of them had the SITU library stamp inside the covers somewhere. What I don't want to encourage is someone obtaining such a book, reading the stamp, and promulgating another internet rumor like the old "The SITU Library was raped clean" falsity. It wasn't and it won't be. For near-hysterical purists, there are rather long library listings which will be kept if anyone honestly thinks that anyone in the future would want to know if there was a microbiology text on the shelves.

What I will NOT, nor never, discard: Ivan's three-ring notebook files [THE Sacred Objects here]; the SITU organization minutes and other administrational materials [in case someone wants to write a history someday]; ALL of the anomalistic books, monographs, journals, and newsletters [even the stuff I believe to be pure crap]; materials which in themselves do not contain anomalistic information, but which rather closely can be seen to be of use to the anomalistic researcher [ ex. books on early civilization; lightning phenomena; animals often mistaken for crypto-forms; etc.]; I will also keep any book wherein Ivan signed his name --- just for nostalgia.

What I will toss: ordinary textbooks if there is no sign that Ivan used them by writing in marginalia or the like --- most of these things are "clean" of anything but text; journals which might have something which Ivan was involved with, but which do not directly or strongly indirectly relate to anomalies, and do not have Sanderson notations nor articles; and, you get the idea. If things seem at all "gray", I'll keep them.

So that's the boring news. I felt that I needed to make it public, however. This culling allows me to continue to protect the collection for future researchers of anomalies.

.... don't know when I'll get out another true anomalies post... chaos reigns here.

Posted by The Professor at 9:16 AM

Labels: SITU; Ivan Sanderson; Robert Warth., Society for the Investigation of the Unexplained.