Digging for the Core: Close Encounters. Soldiering on with the case file reconstruction and case category appraisals.

Today: Close Encounters of the First Kind [sightings with details at about 500 feet or so.]

Once again, a tougher job than either of the last two. Why? because every case has to be read to determine if the proximity criterion is met, or there is some mitigating circumstance whereby it's rational to expand the criterion in some case [example: the witness used a telescope or binoculars.] Because of this re-read issue, it was harder to just sweep up cases which weren't already in my CE1 files to make a larger pile.
.
So, OK, enough whining by me: what did I do? CE1s are a large file drawer --- over 300 incidents. So, it was a good base to work with. I added Allen Hynek's select CE1s from his UFO Experience, as I trust him, and he defined the darn category afterall. Going through the file folders and making credibility judgements about which cases seemed to be strongly founded, I chose 45 foundationstone cases [33 of "mine" and Hynek's 12], plus enough other good ones to get to just over 150. That was pretty good but still felt a little light for something as well-observed as CE1s. I went to Fran Ridge's NICAP site, which has a CE1 category page, and picked out those cases listed there which someone thought were important enough to create a documentation directory rather than a simple listing. With those as a supplement with some confidence to them, the total numbers of promising cases went to just over 230. Since that was, weirdly, almost the exact number of the previous radar file, I accepted the synchronicity and went with it. 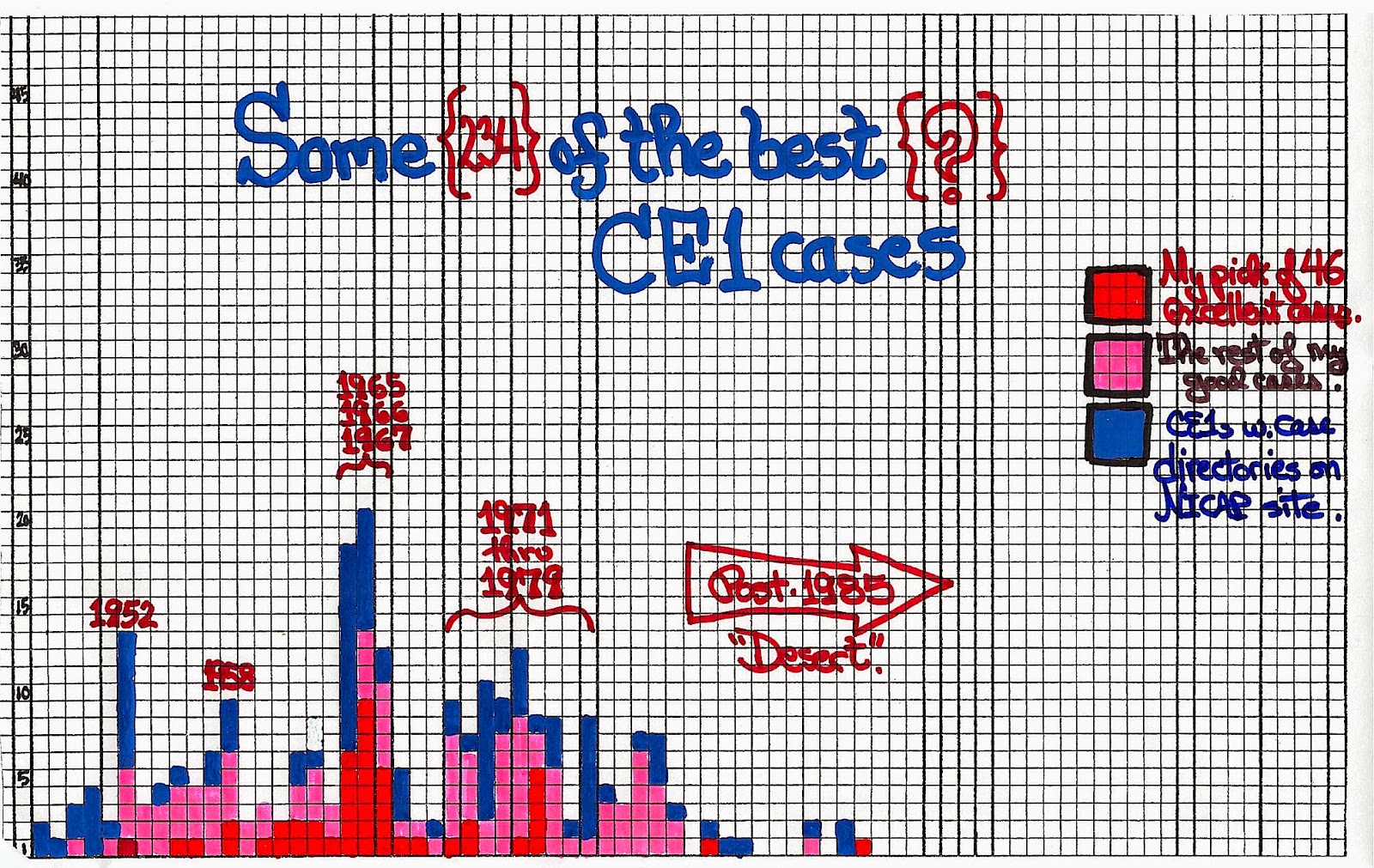 Here's the yearly occurrence graph. My select best cases are in RED. The rest of my cases files judged to be good ones are in PINK. The supplements from Fran's NICAP site are in BLUE. To give you the potential fun of imagining all sorts of correlations [WARNING!! Don't take me or you too seriously while doing so!!], I'm going to re-post the radar graph from the previous post. 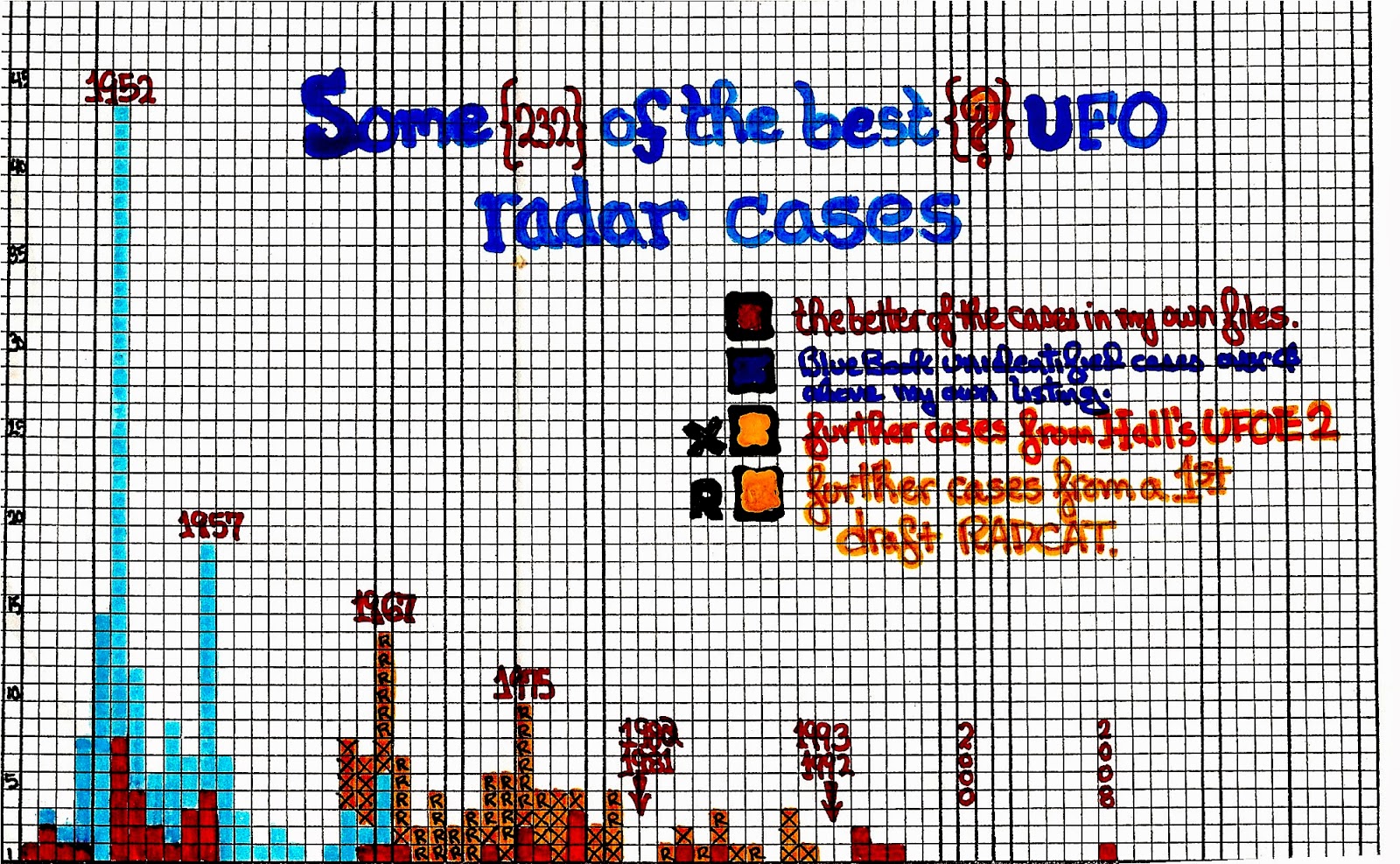 They are sort-of-the-same and sort-of-different aren't they?? The accumulations and deficits tend to fall in similar areas, and that must mean something either about the phenomenon or about the blogger. I'll plead some guilt in the issue, but I honestly do not believe that I am entirely the causal agent here. I've seen this pattern too often elsewhere in this field. And THAT has, in its strange way, convinced me even further of the objective reality of what's going on.

On the other hand, there is at least one big difference in these graphs for me: the phenomenon got closer. Between WWII and about 1958, the phenomenon seemed happy to display itself as extremely advanced aerial technology to, perhaps, boggle the engineering and military mind. From the mid-1960s through at least the decade of the 1970s, it seemed to preferably "move in" a little closer. Maybe it enjoyed the "personal" individuality of the "60s" as much as we did {Just Joking!! --- don't start another internet rumor!!} Whereas the bulk of the best radar cases are early, the bulk of the best CE1s come in the "middle." Of course the "end" of the graph is a UFO desert in both.

One might speculate upon what this possible shift in display means --- and go and have the fun doing that. Just keep a VERY open mind to be healthy about what any of this might really mean. 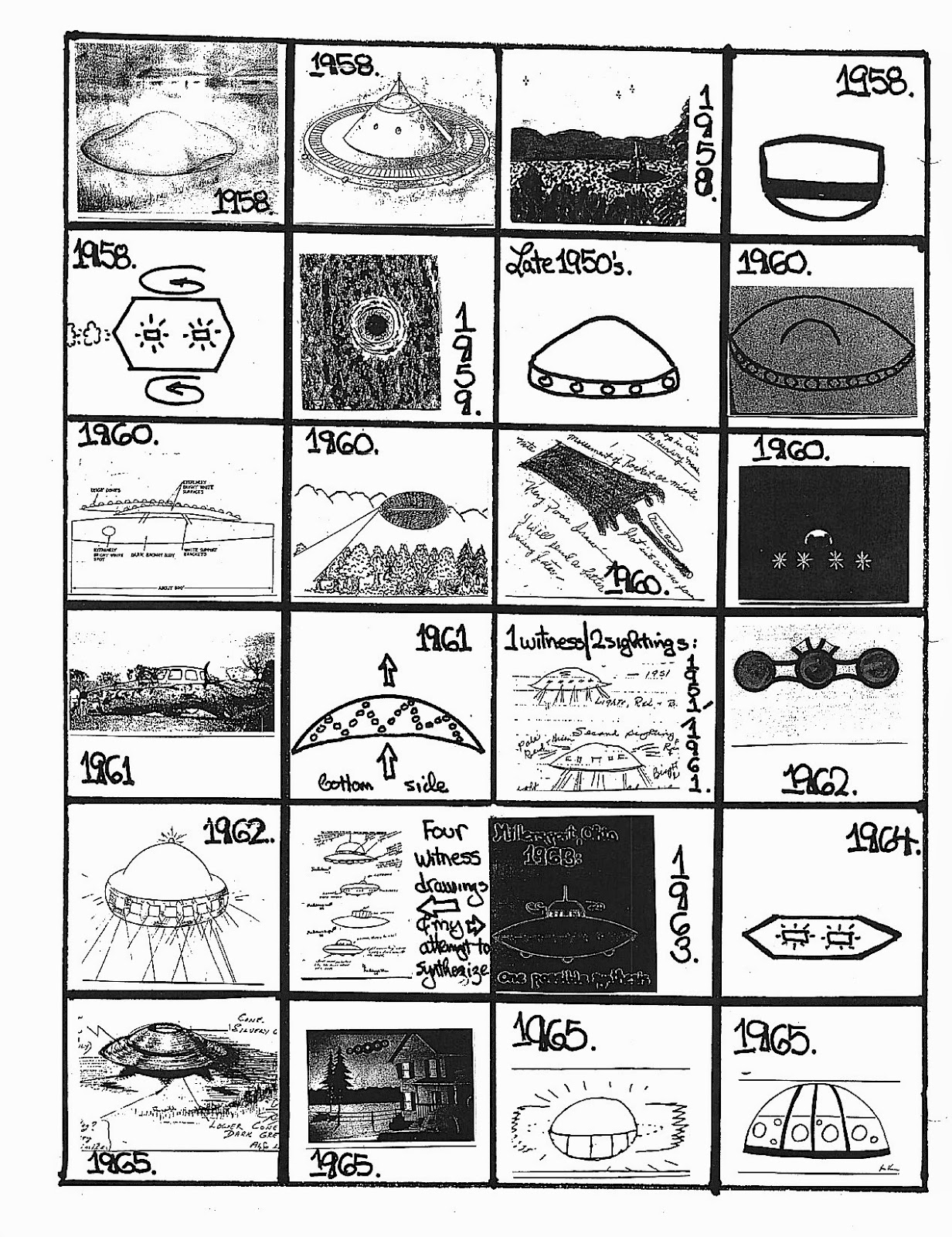 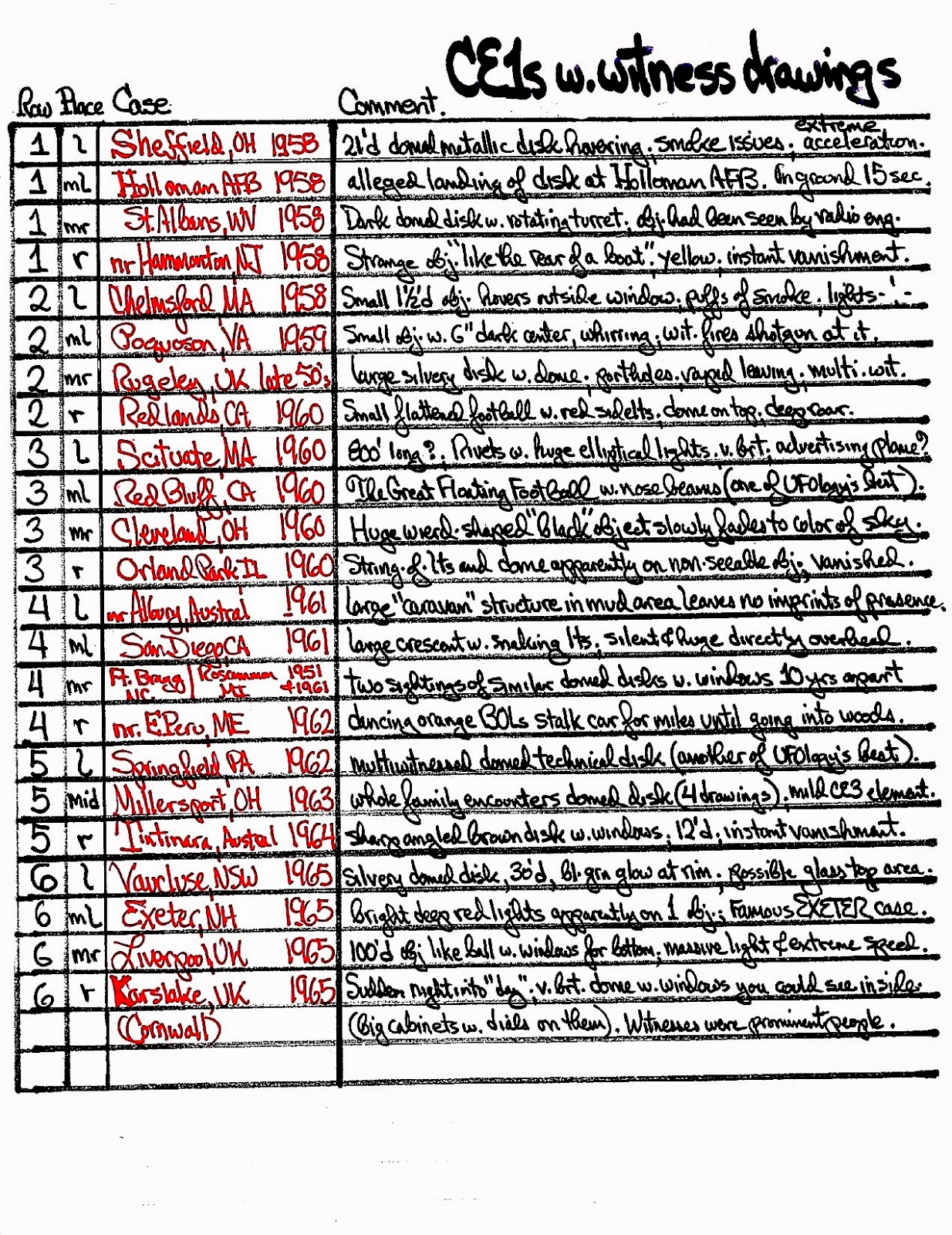 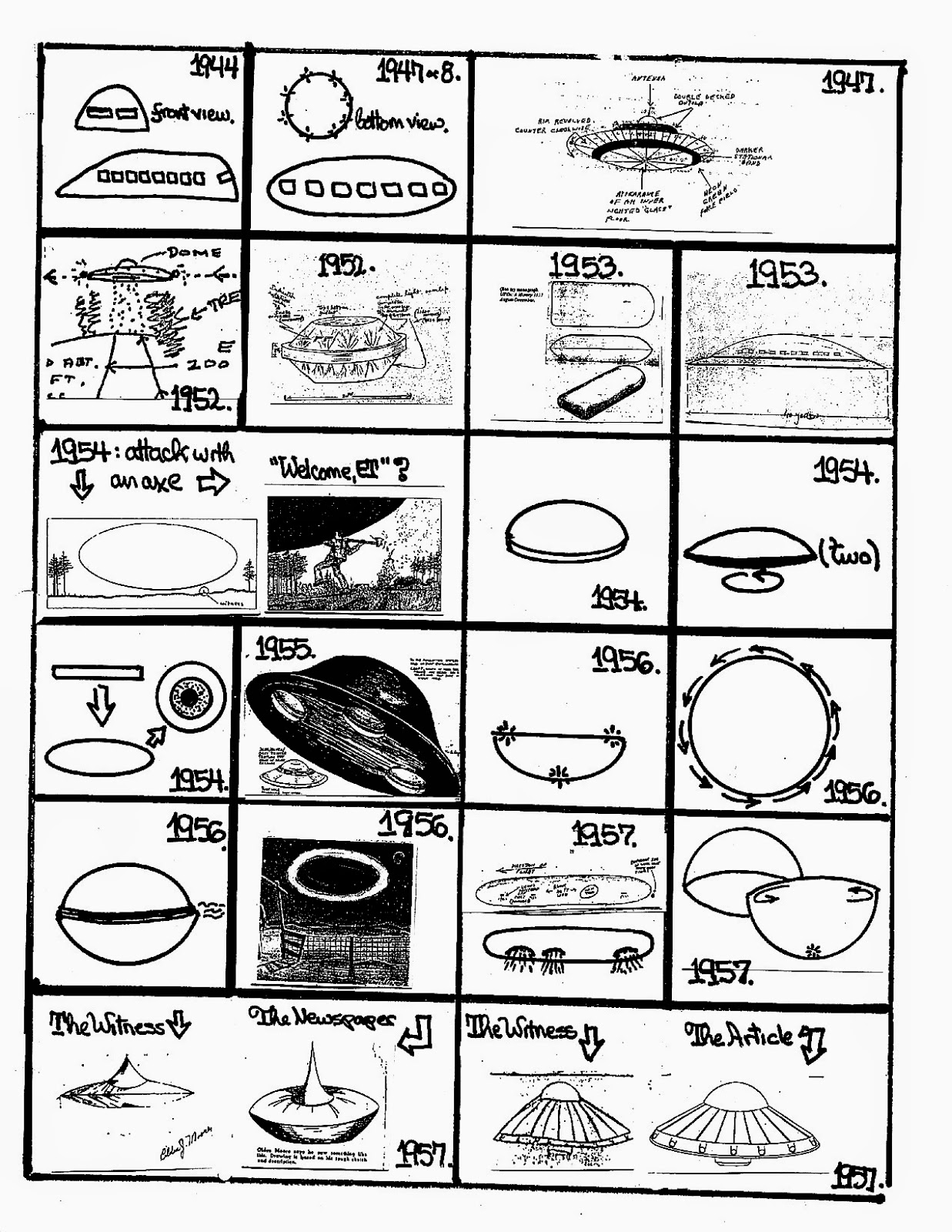 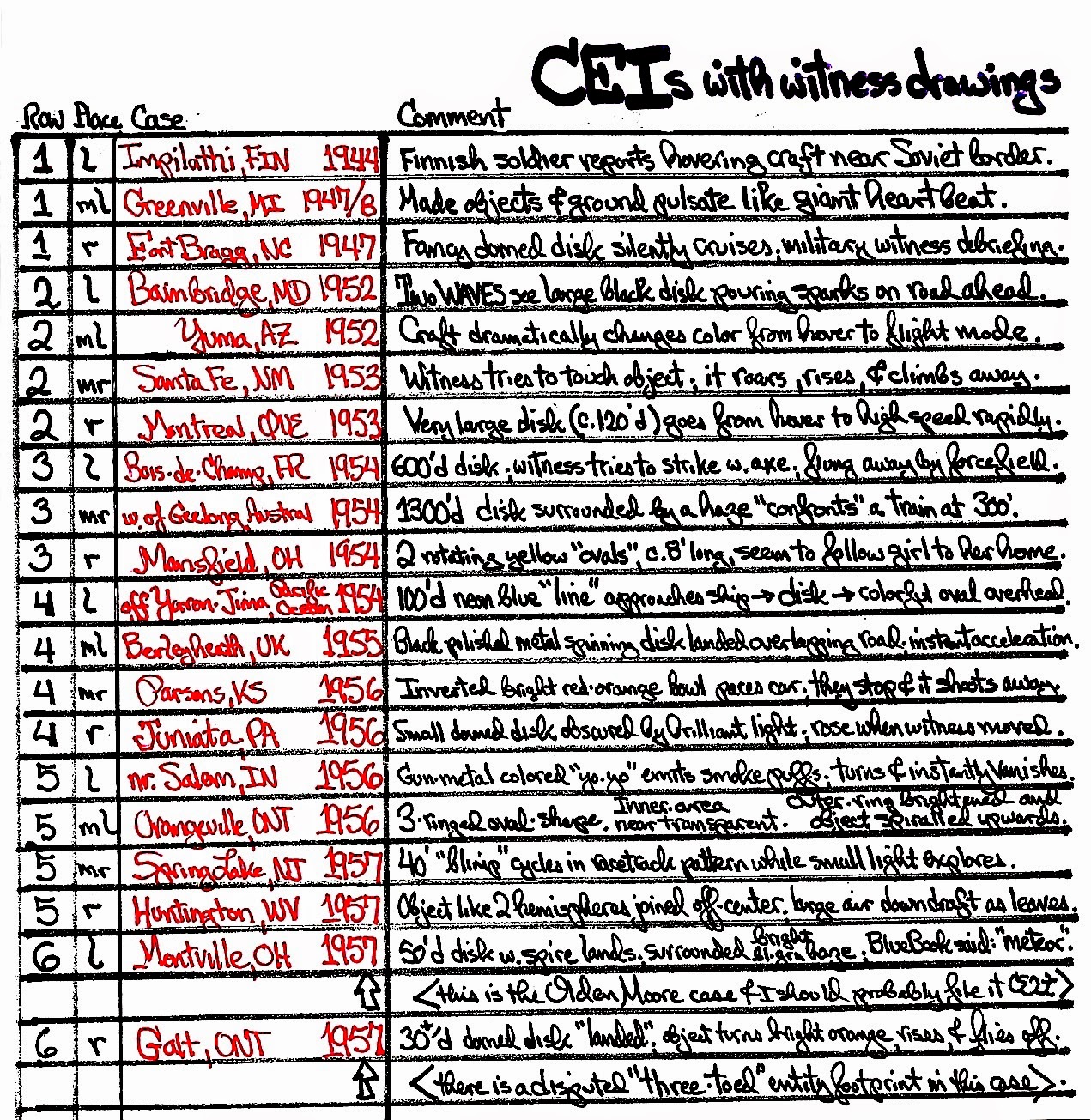 I've put these pages on the blog already in the past, but it doesn't hurt to re-publish them in this context. Obviously what they're doing is giving you a group of illustrations from CE1 witnesses, or polished up versions of cruder sketches that they made. They, as is usual in UFOlogy, demonstrate the bewildering variety of detail that we're constantly presented with. I have said before that I believe [always with a willingness to be flat wrong] that this variation is much more deliberate on the part of the Agency-behind-the-UFOs than either foggy observation by witnesses or every UFO driver having his private hot-rod.

I believe that this is just very clever deliberate pattern-breaking which allows the individual impact of the encounter without our cultural aura of uncertainty being threatened. 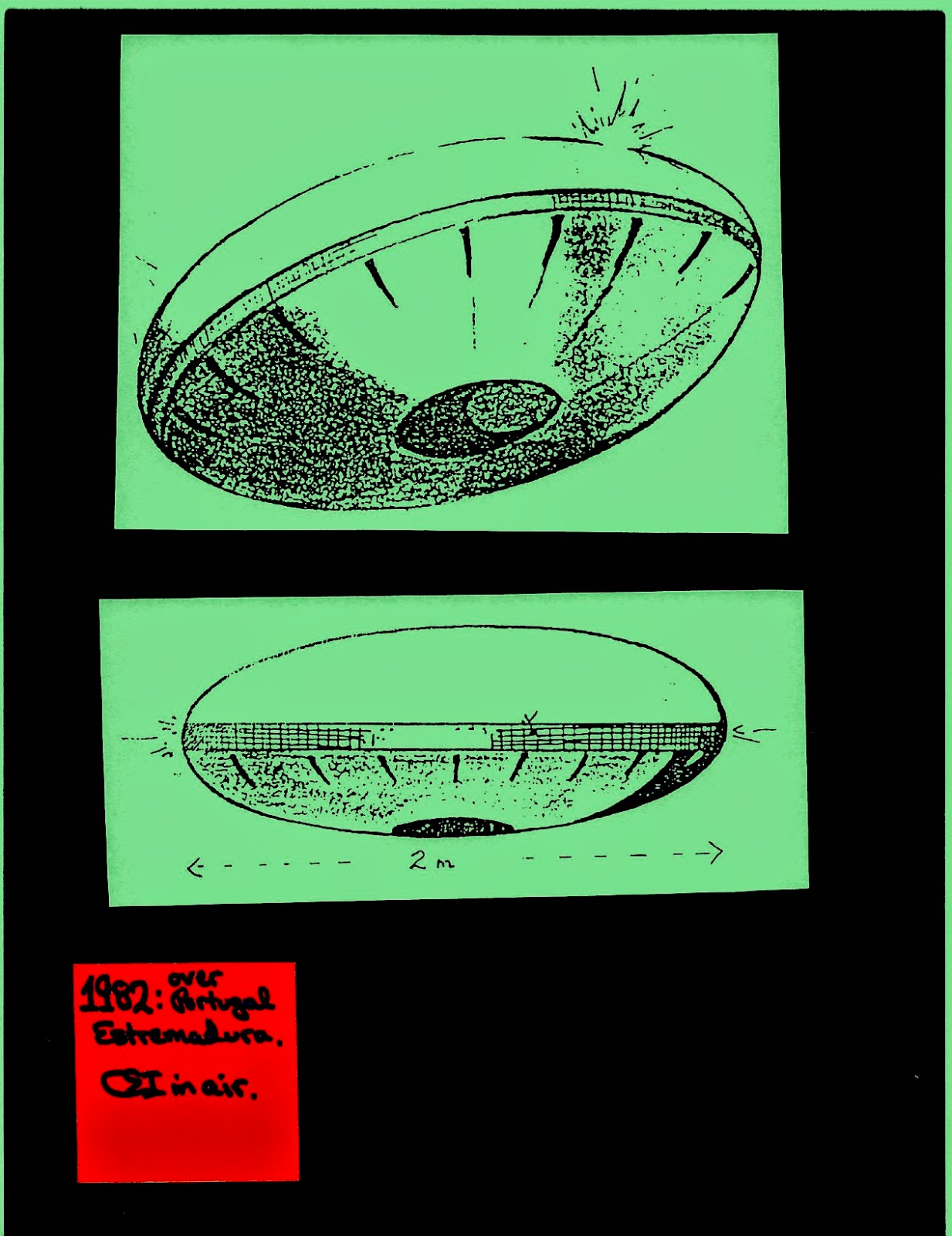 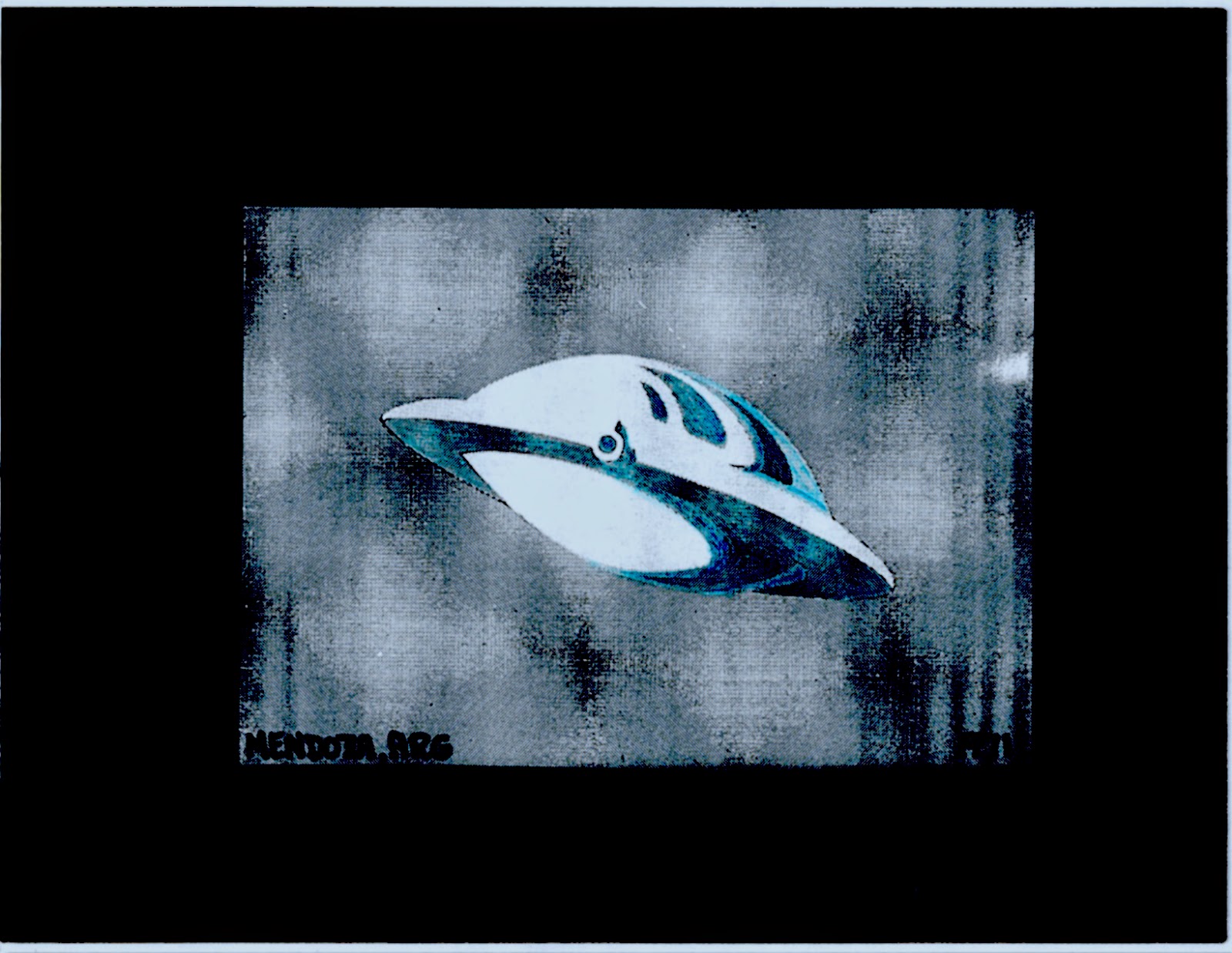 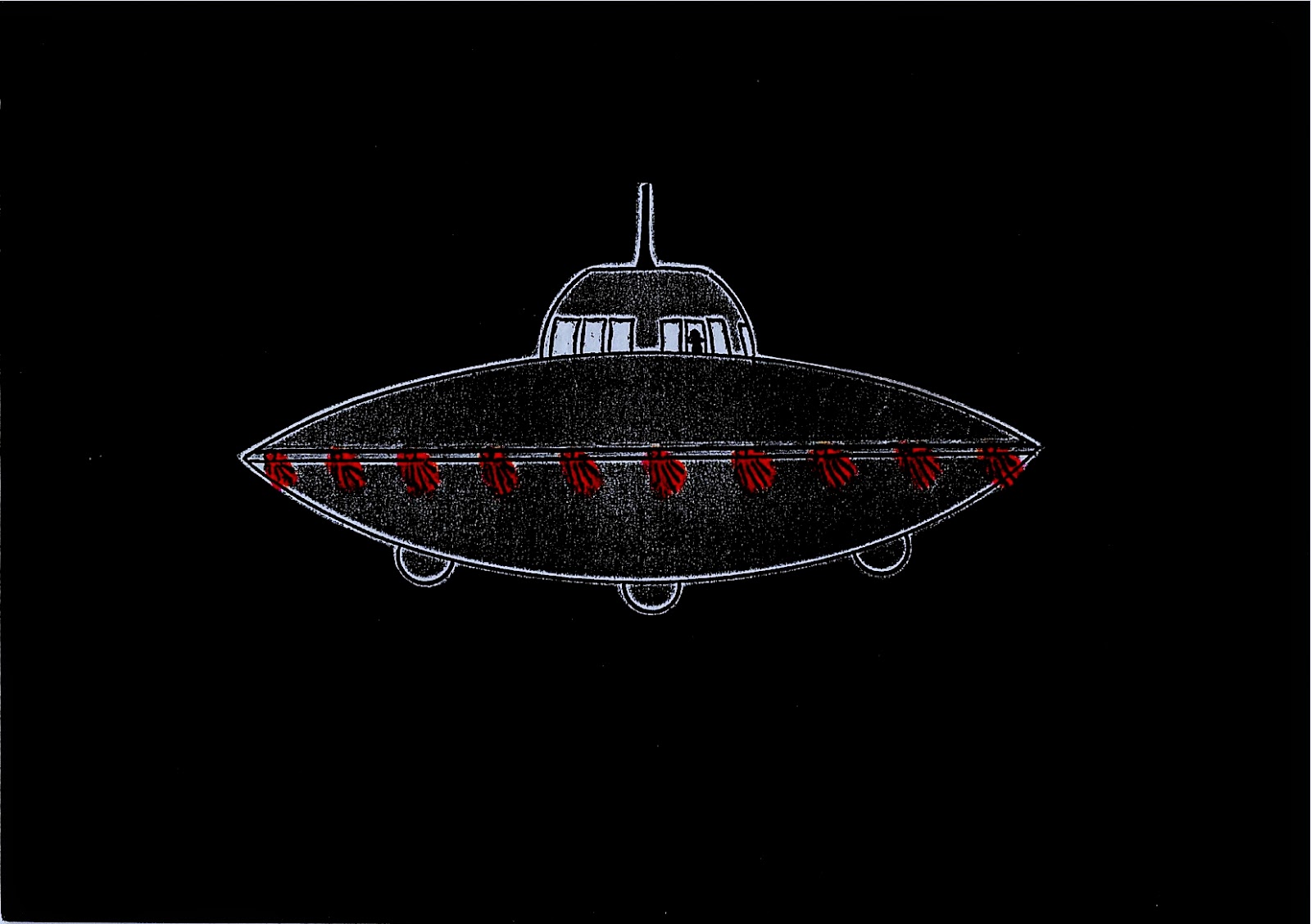 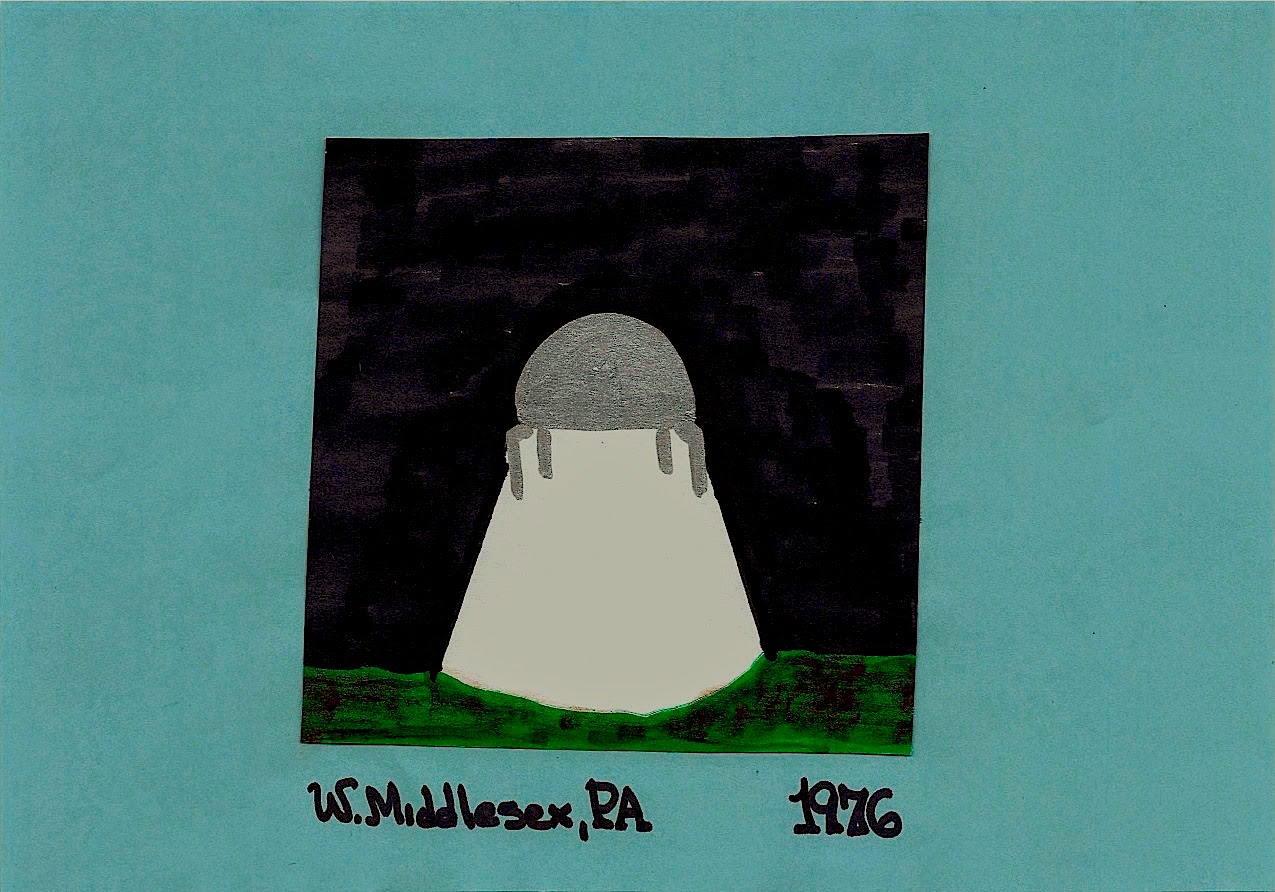 Some UFOs showing themselves, even one giving a little peek at its "driver." 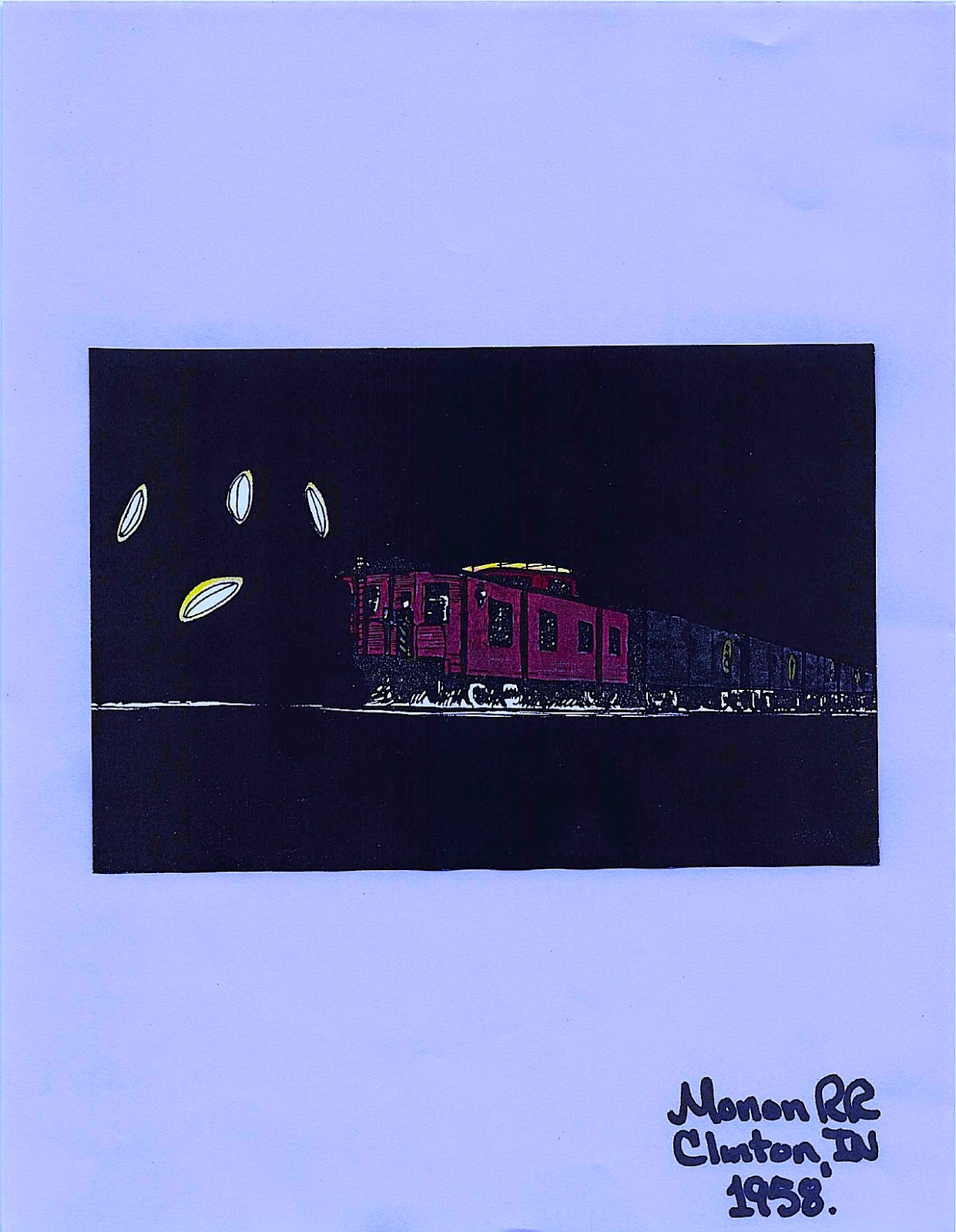 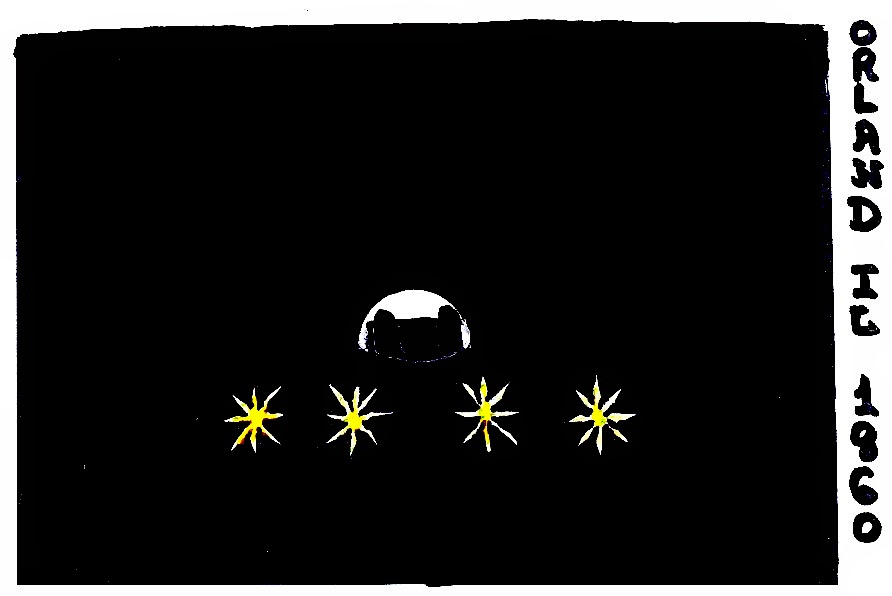 ...chasing a train, and half-way hiding. 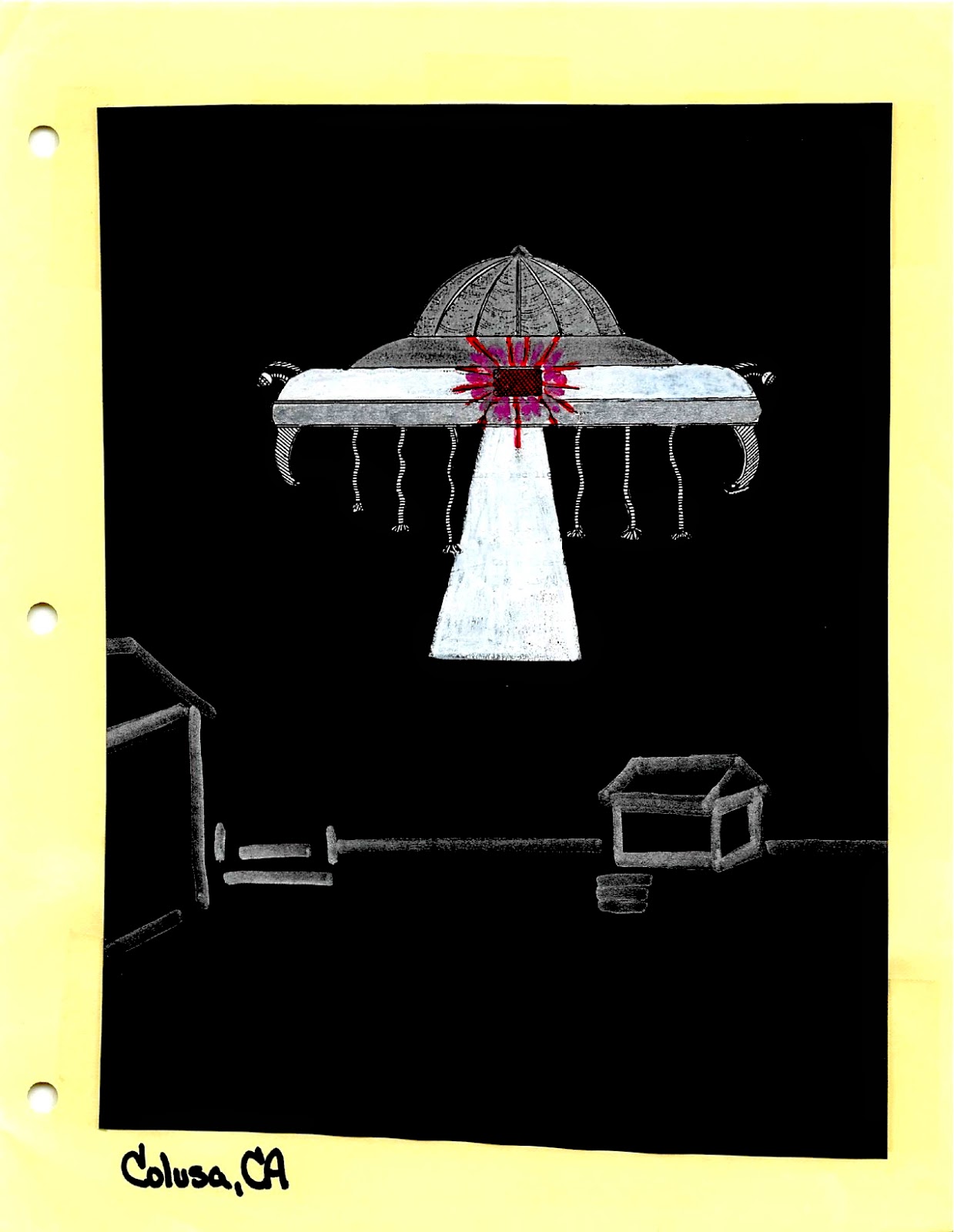 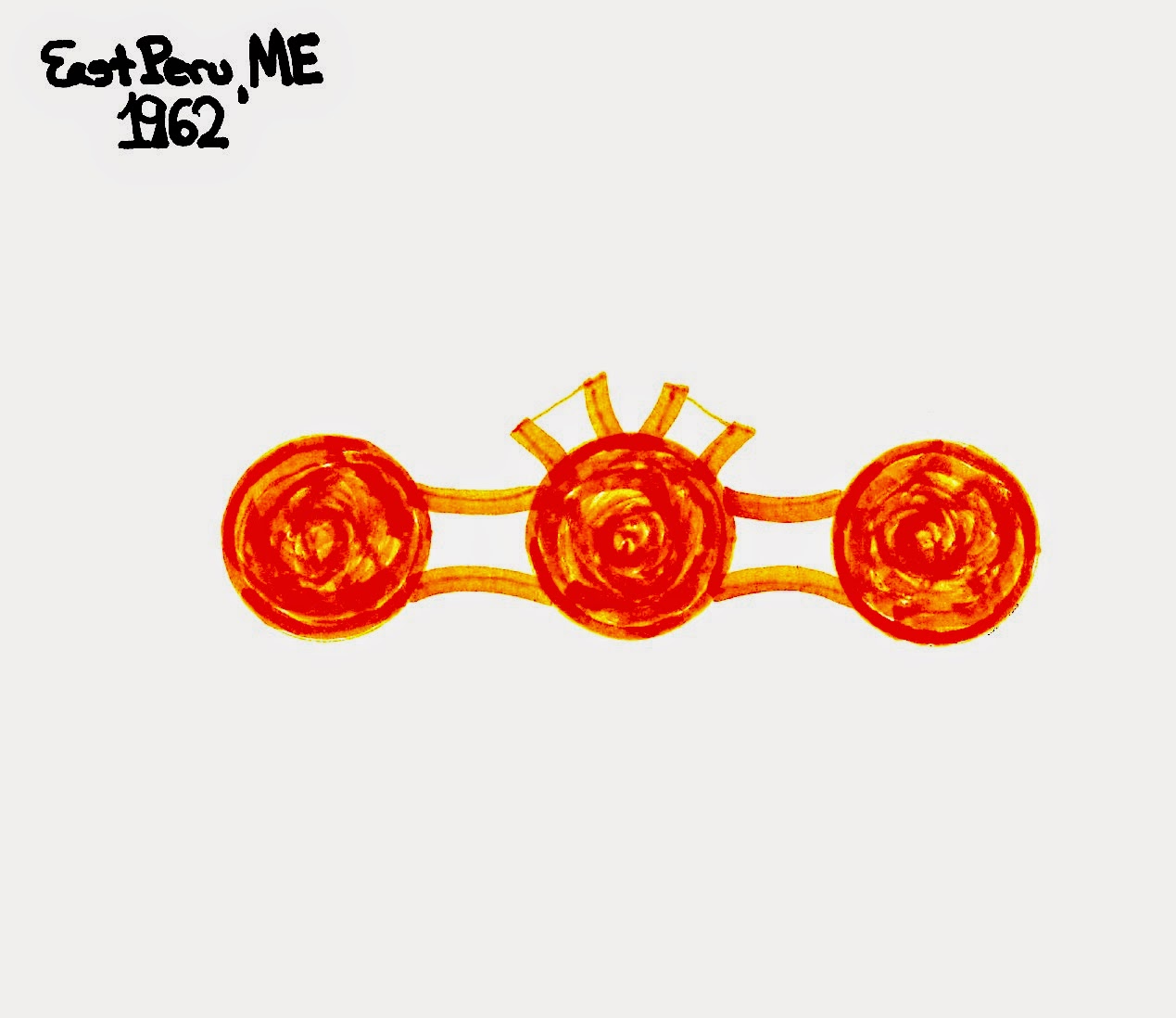 Making an electrical nuisance of itself, and being downright harassing of some car drivers.... 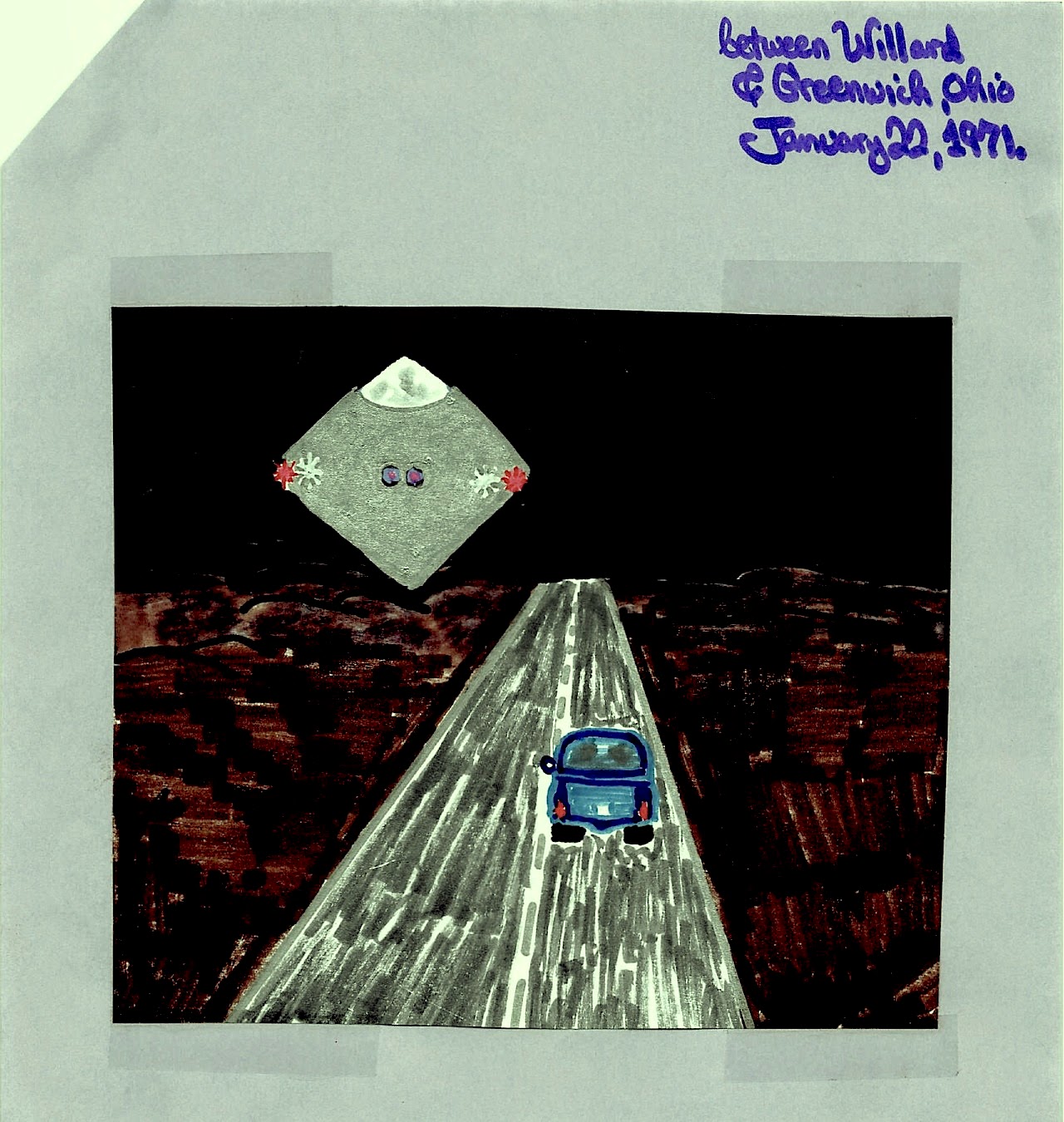 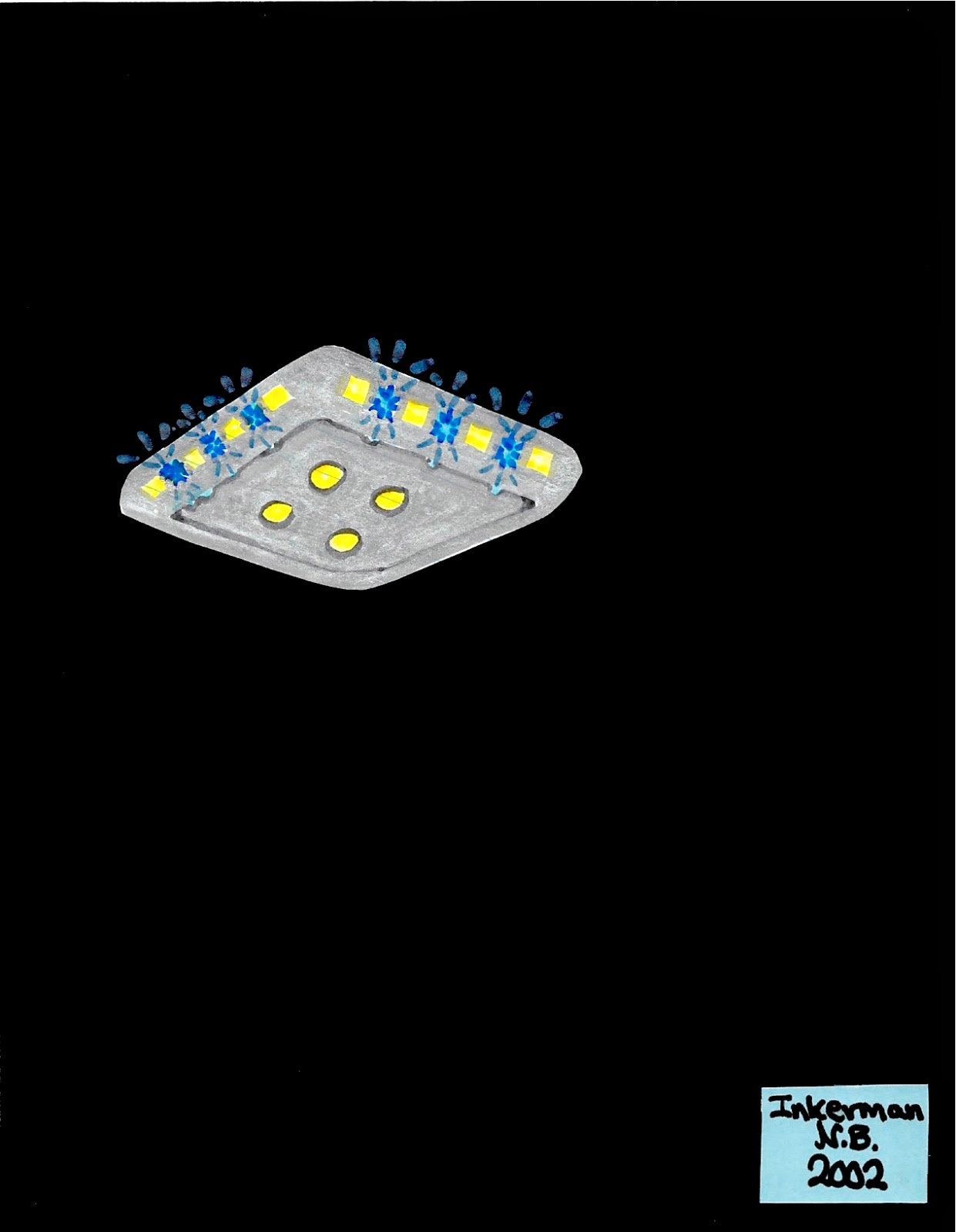 ...showing that they can be the shape they want to be. ...putting on a good show down under, and maybe even leaving a trace... 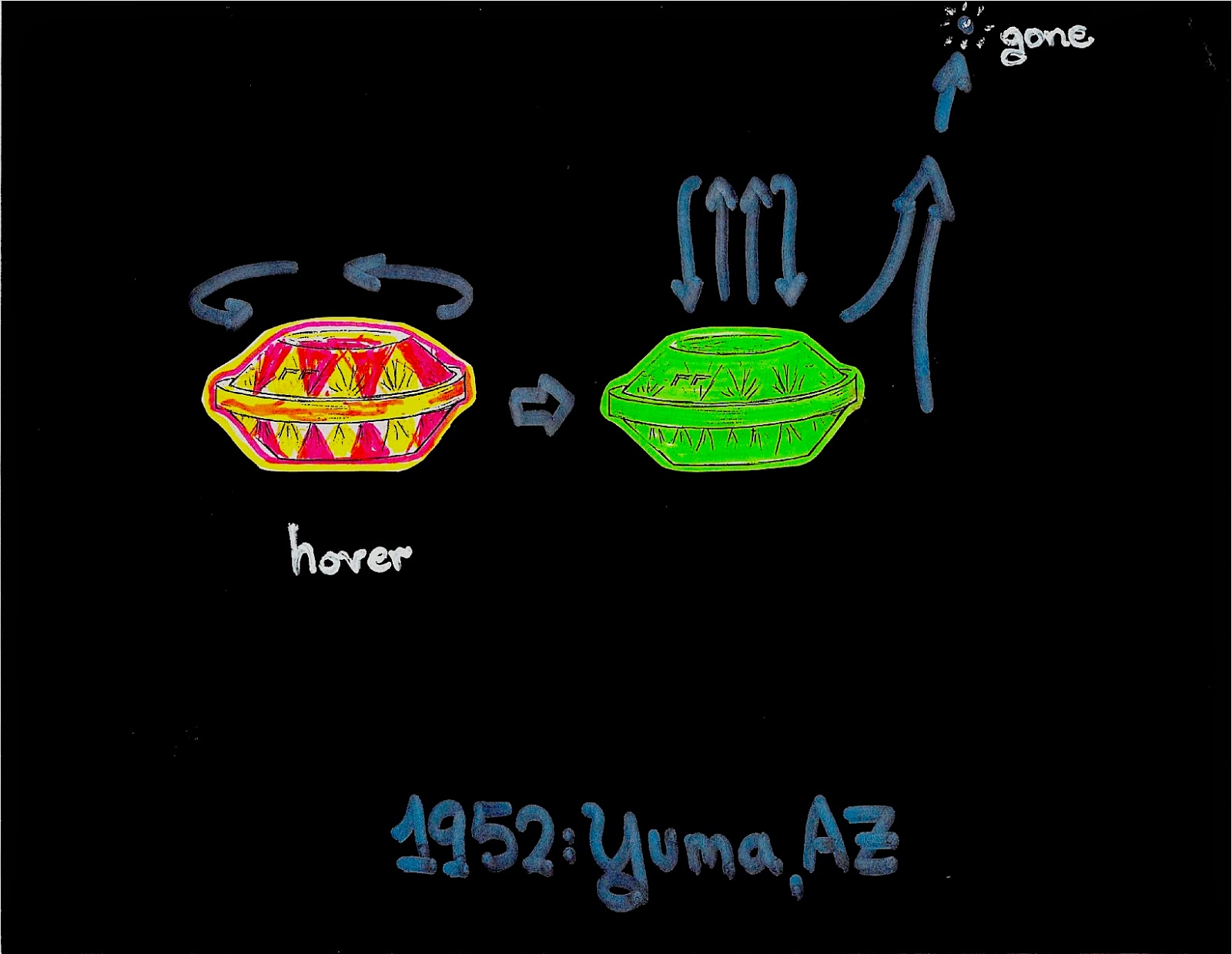 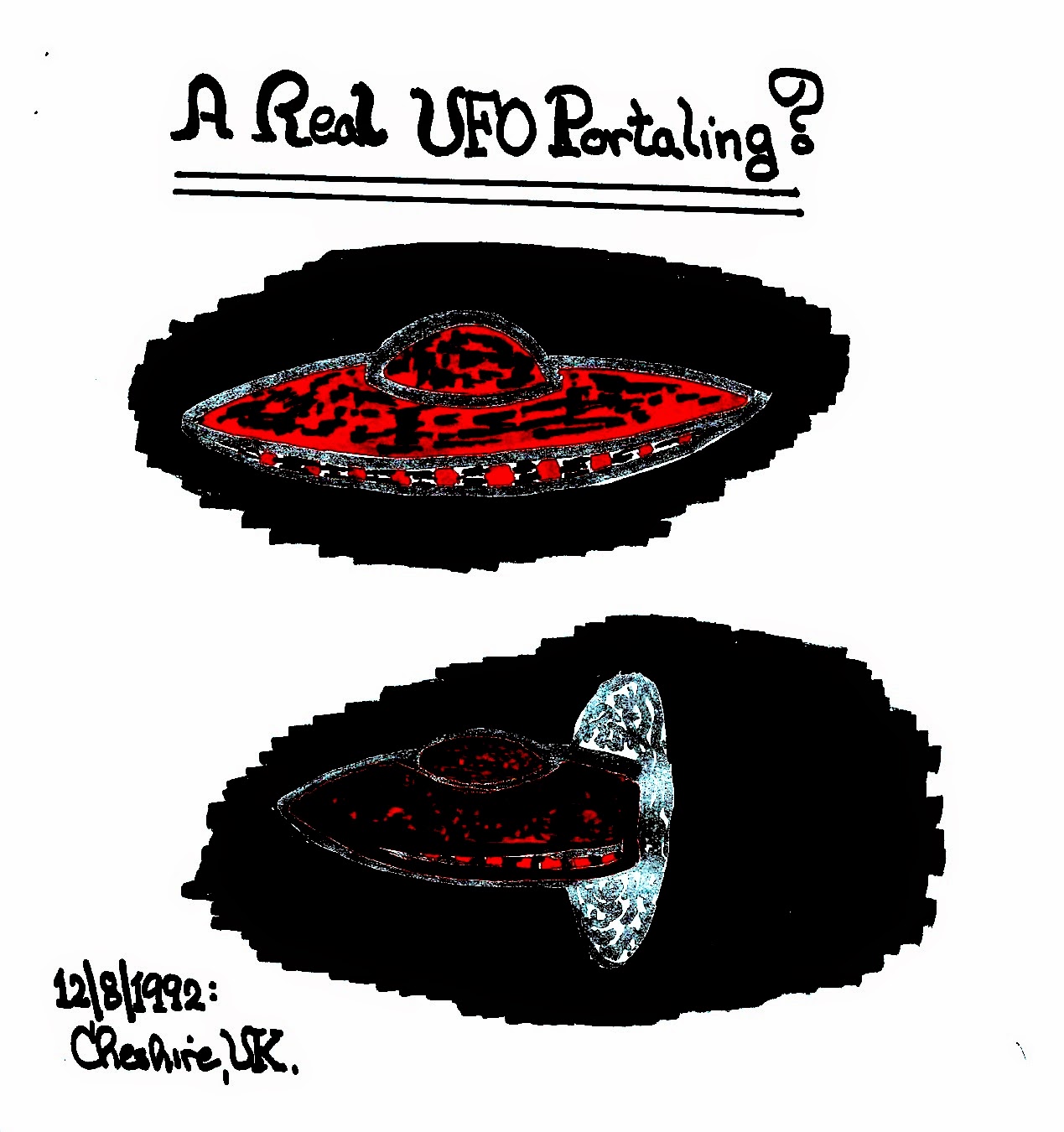 Till next ... watch the skies, friends. Even in this UFO desert, we might get lucky.