Digging for the Core, Radar. 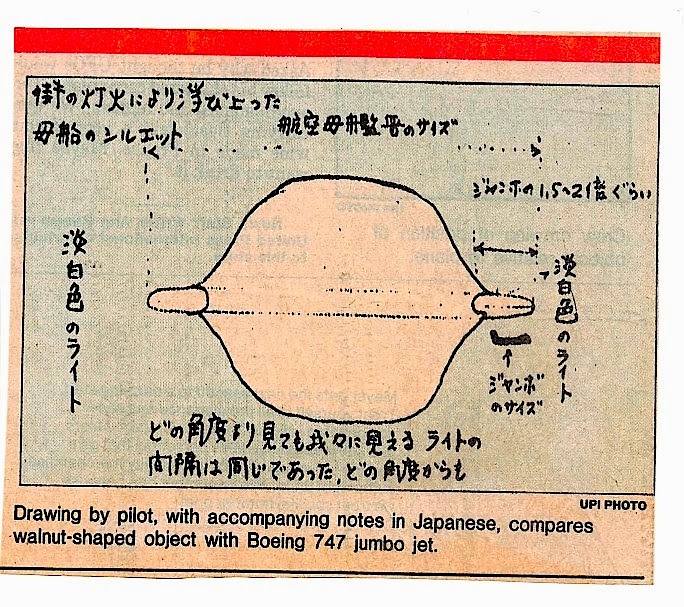 Today I'm going to do something simpler with a different Hynekian category of UFO cases {radar involved incidents}. This difference is because I'm too lazy to do more, and I'm a profound ignoramus about the vagaries of radar equipment and atmospheric false propagation tricks. This reduces me to serious faith in my past UFO "brothers" who analyzed these matters. 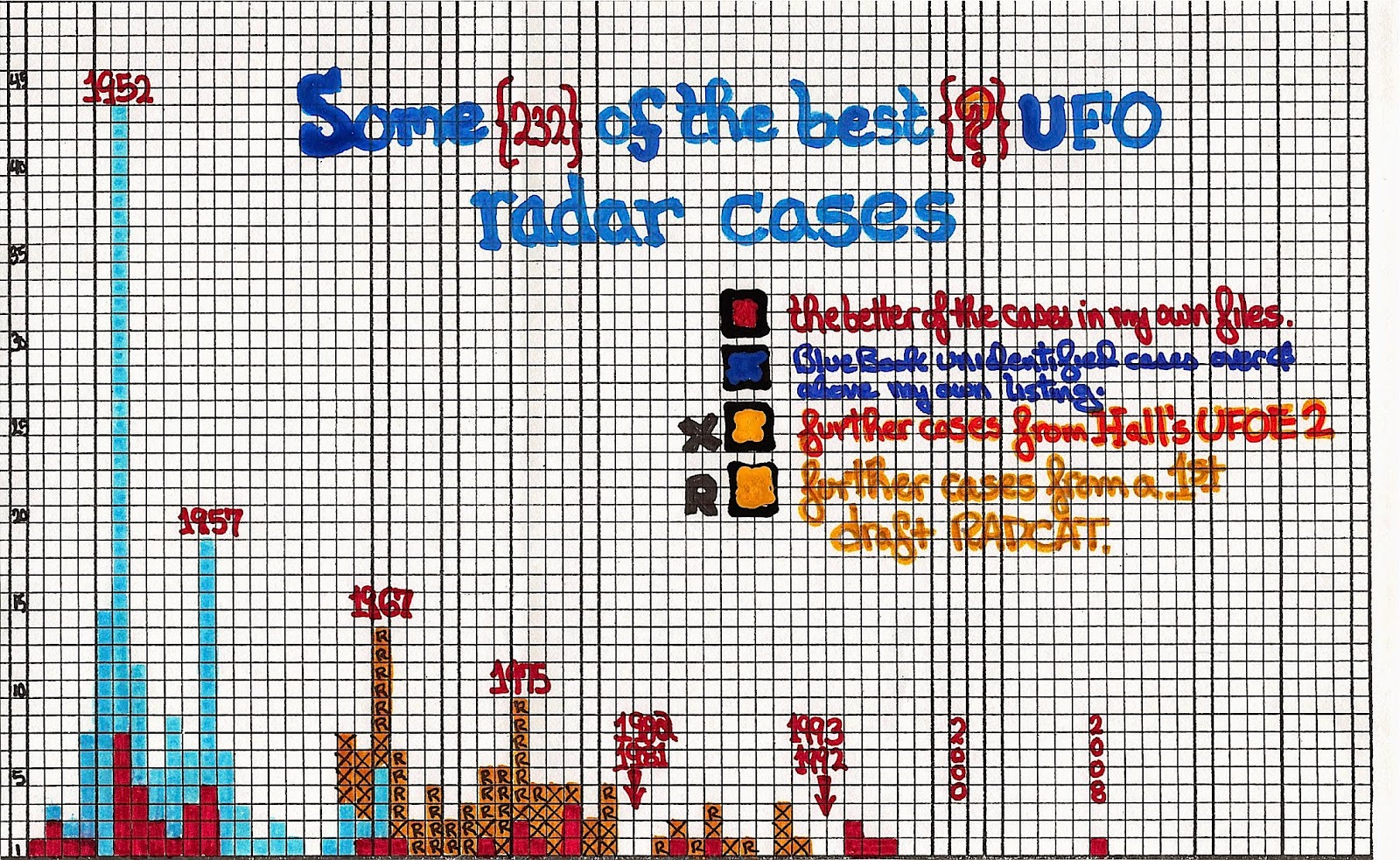 In a vain attempt to save face, and show that SOME work was done at least, I've attempted to plot a list of [hopefully] good UFO radar-involved cases, as you see above. My own case files have around 120 folders/individual cases. Of these I could flash-determine that I could be somewhat "proud" of 43 of them... I am sure that many more of the 120 are in this "good case" category, but I was too lazy to re-read and evaluate the other files.

43 was a "nice" group, but it seemed smallish for the whole radar category. So I went to the Sparks/ Berliner/ McDonald "BlueBook unidentifieds" list and added in the non-duplicated cases there. Then I went to Dick Hall's UFO Evidence Two and added his radar cases. Lastly Jan Aldrich had sent me a first pass copy of his and Martin Shough's RADCAT listing, and I added those. This got the pile up to 232, and I thought that was OK.

The 232 number has a lot of bias in it. First and most obviously, there is the great lump of cases, mainly military, from the Project BlueBook era. They are shown on the graph in blue. Then there is the prejudice, whatever it is, that happens in my own mind when I decide to make a case file and then evaluate the case as "good". These are shown in the graph as red. Hall's UFOE two is biased by time period{ post-1965 mainly, through c.2000}. The draft RADCAT is only biased in that I started looking at the entries post BlueBook's close.

So, make of that what you will. For me, even with all the biases, I'm boggled once again by the desert which follows 1980 that we've seen in other case instances. The main "muscular" UFO waves [around 1952, around 1957, around 1967 (( "up yours Ed Condon; where are you??")), and around 1975], are all standing out. 1954 doesn't. Why?? With 1954 I believe everything goes out the window except weirdness. To put it another way, all these others look like Core UFOlogy, but '54 is like a freak hybrid --- check that, never use the word "hybrid" when talking about UFOs --- uhhh, '54 is more like a strange combination of different things.

... but given the earlier theme of searching for the UFO Core, it seems to me that we've found it again in the better radar cases. Advanced aerial technology that can easily outfly us. 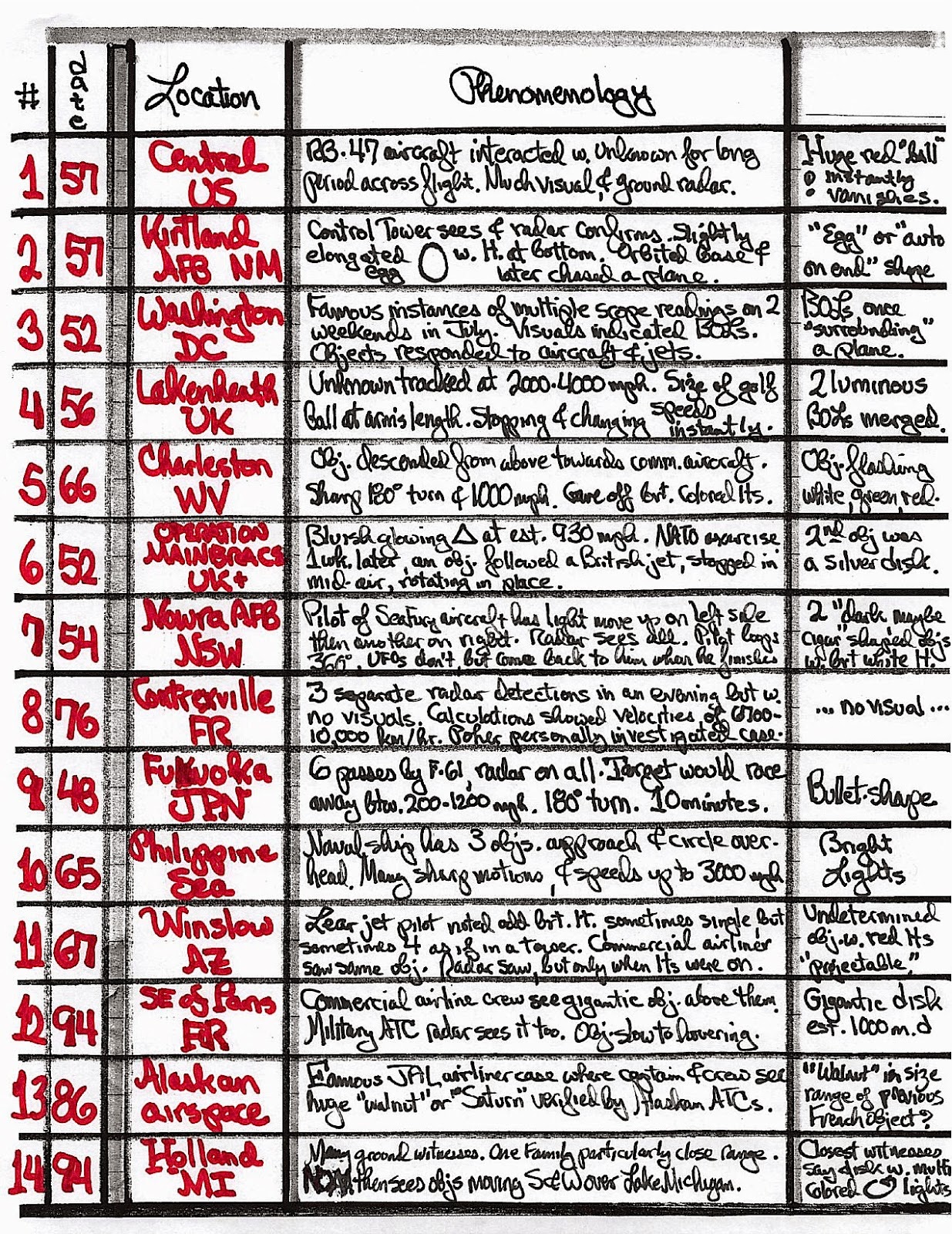 I could have specifically listed a lot of cases, but I had a template for 14 cases and, being a do-nothing goof went with it. I think that I chose some good ones, though --- cases #1,2,&4 are universal favorites and you'll have to fight Jim McDonald if you want to argue with them --- I'd suggest not. #3 was Colorado administrator Bob Low's favorite unknown, and it's one of mine too. There's so much corroboration in this case that it's an evidence mountain should people really want to find the truth. ... and down the list, there are Hynek favorites, a Bill Chalker favorite, a Claude Poher favorite, a Dick Haines favorite, a Jean-Jacques Velasco favorite, plus BlueBook unknowns. ... and the thing that I got to work on, Holland Michigan.

Since radar cases are notorious for having zero or lousy visuals to wow the spectators, here area a few things I made from my work on the Holland case to amuse you. 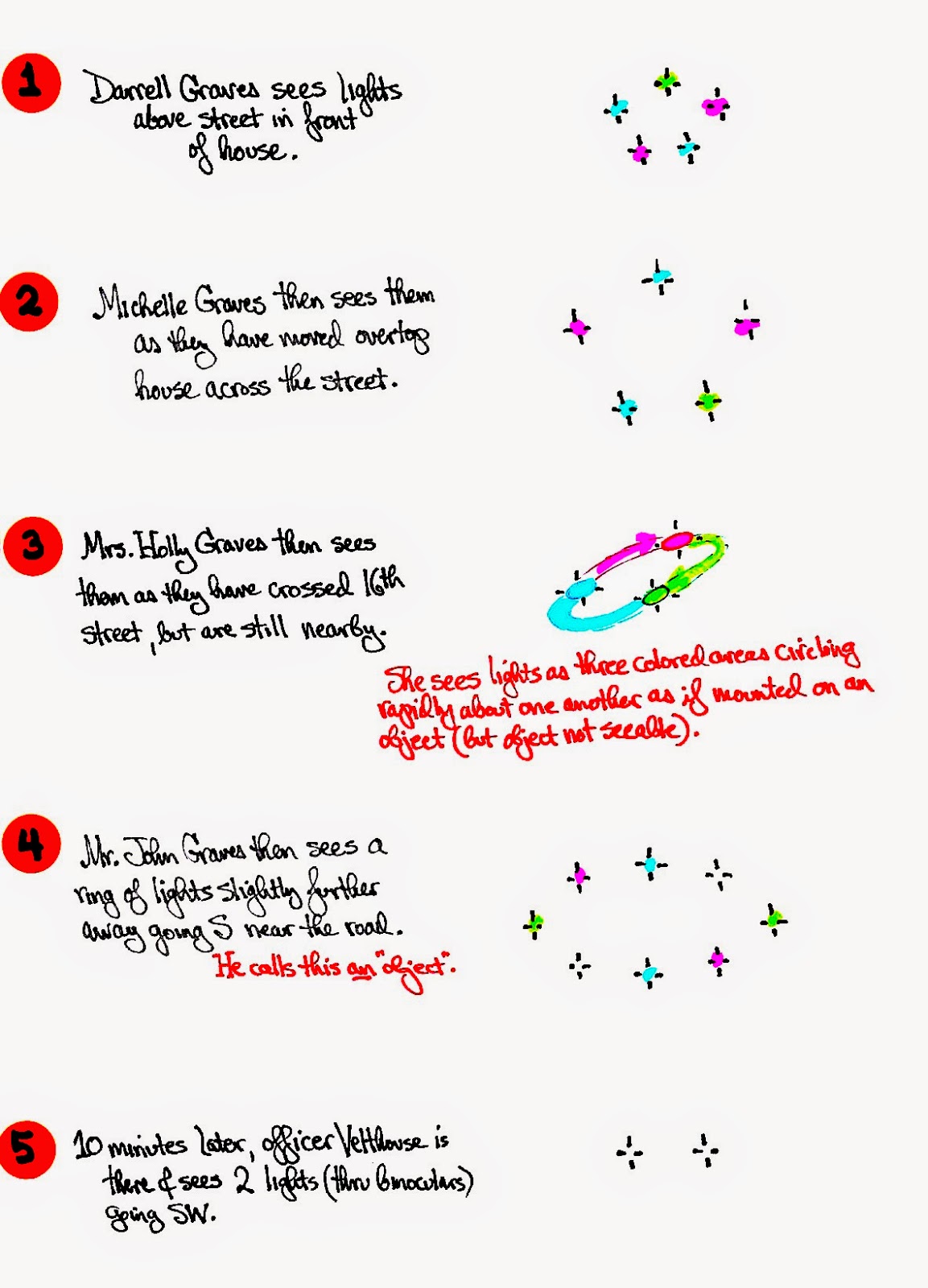 This is a drawing I did using the commentary in the never-published MUFON field reports interviewing the Graves family about how a circular thing with cycling colored lights moved from across the street from their house and away. 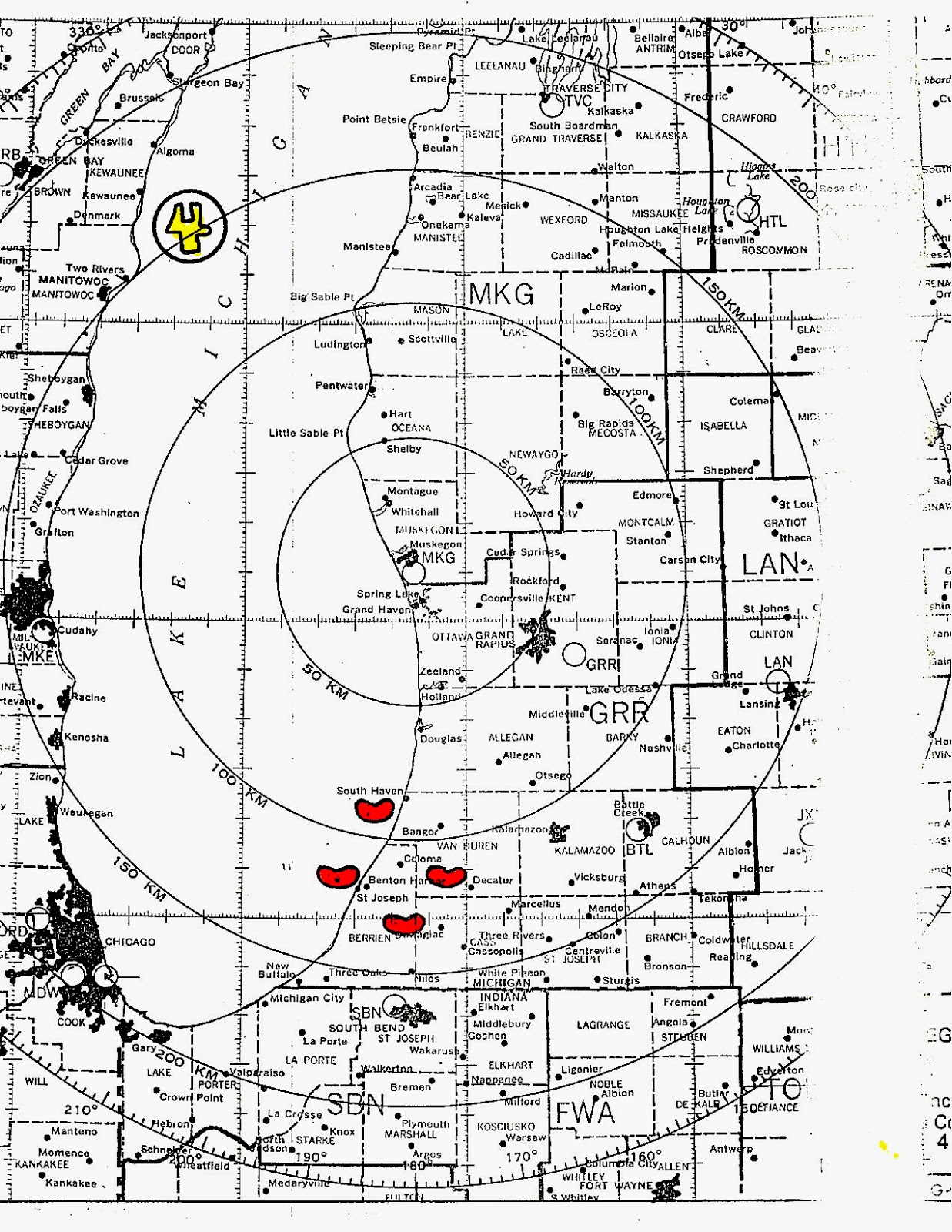 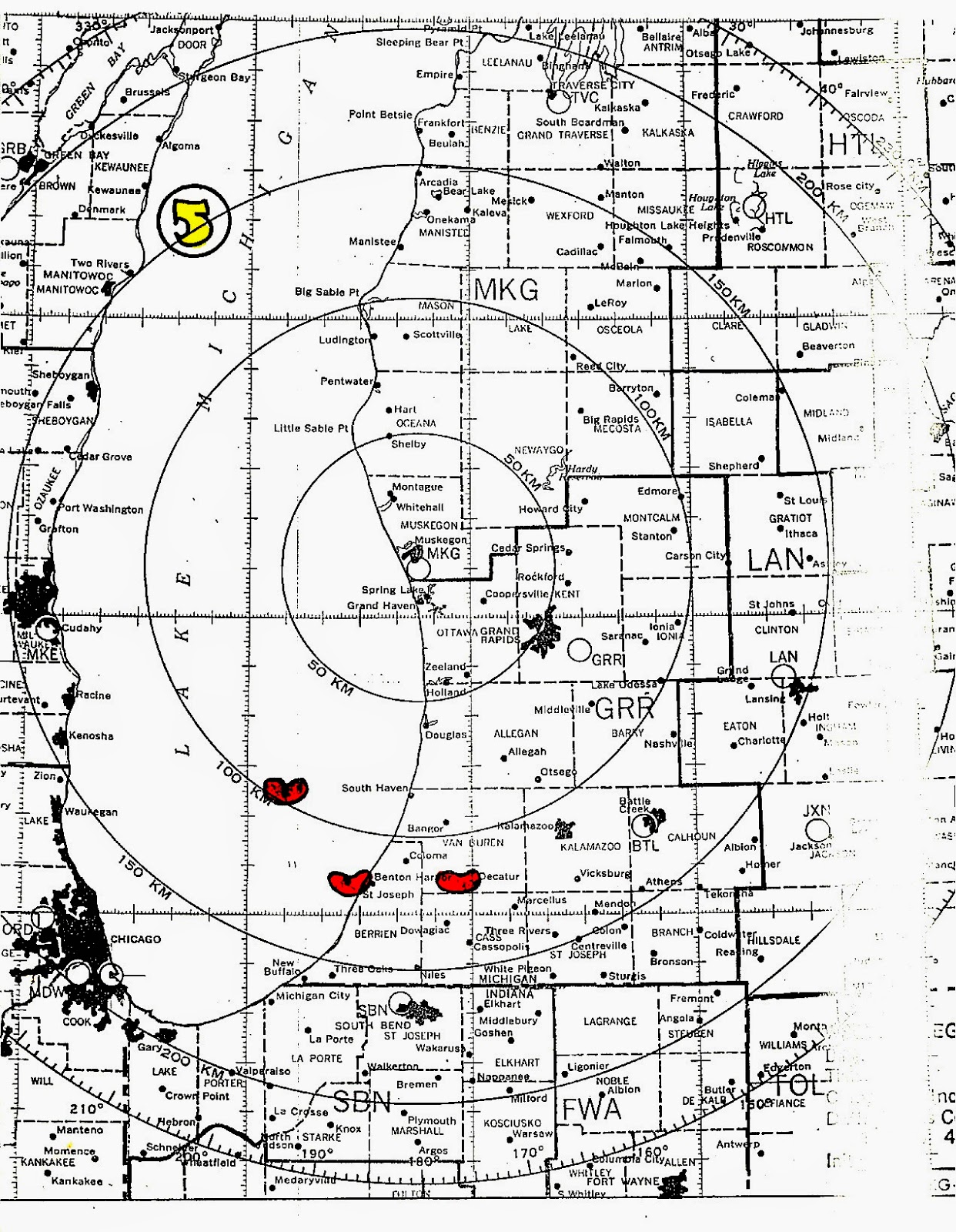 The above two diagrams are two of several that I made from the narration that the radar operator gave me and Dave Ford while we were there with him and his boss at the station. He did not see any color, of course; I just added that to make the blips stand out.

As to what these creme-de-la-creme may be telling us:

1). The object shapes, as usual, are very different. Disk, cigar, oval and generally radially-symmetric shapes dominate [also as usual] and there are some cases where all you could see were lights. But at Mainbrace one of those nuisance triangles even snuck in there for a while.

2). These things are fast and maneuverable. They can hover, or they can cruise at 2000-4000 mph. A case from Kirksville, MO [one of the notorious "case missing" incidents] estimated the speed at 6000 mph. Good old-fashioned Top Gun Alien Technology.

3). There are two size-monsters here, both later year ones. Rather than being weaker cases, their provenance is extremely strong. The JAL case said: "Two Aircraft Carriers." The '94 French case said : Disk 1000 metres in diameter.  Yep. No doubt the planet Jupiter.

4). Some extra weirdness creeps in as well. The RB-47 object instantly vanished. And Hynek's Winslow, AZ case would show on radar when the lights were visually seeable, but when they would suddenly switch off, the ground radar would lose the object's blip. Do these things flip in and out of normal space, or do they just have a fantastic stealthiness which they switch on and off? 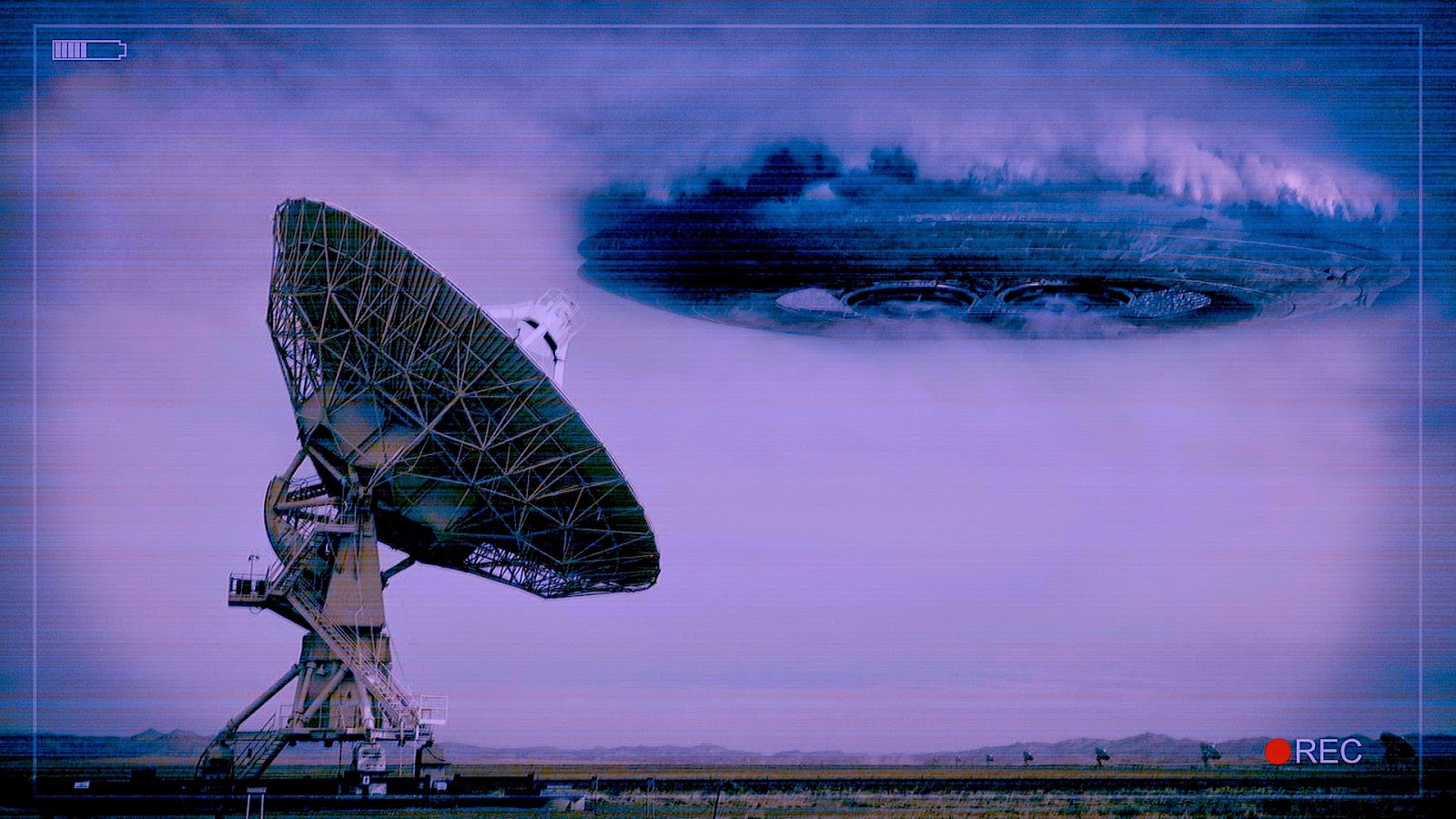 So, there's another chapter. What does it tell us?

UFOs are real, baby, just ask the Air Force...... or practically anyone else.

And as to what's next?

Posted by The Professor at 2:51 PM