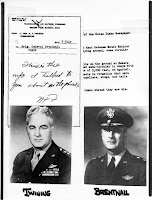 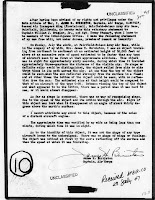 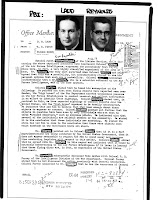 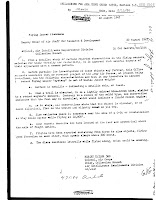 In late June of 1947, the flying disks had begun to appear all over the United States. This was the Air Force's area of concern, and, after convincing themselves that this was not citizen craziness, they got on the job. The document on the upper right is an example of how quickly this happened and at what level of authority. It's a note from General Nathan Twining [Commander of Wright-Patterson AFB, and the AF's high technology research group] to Brigadier General Samuel Brentnall who was chief of the Engineering Technology division there. Twining and Brentnall have been discussing Flying Disk reports [there is a newspaper story on them clipped to this note] already by the beginning of July. So, the AF's technology wizards are quite interested in what this mystery device is, which has now been reported by many of their own flyers.-----------------------------------------------------------------------------------

The major information point for flying disk reports was in the Pentagon at the Air Force's Intelligence Division. There they had a Collections branch commanded by Colonel Robert Taylor III. His right-hand man was Lt. Colonel George Garrett. Garrett got the job of collecting and correlating all the flying disk information. He had an FBI contact named S.L.Reynolds. The reason for the contact was that the intelligence community initially suspected that some of these reports were made by Soviet sympathizers in order to scare the public. They quickly found out otherwise [Soviet sympathizers weren't flying at 30,000 feet in metal disks to scare people in New Mexico], and Garrett and Reynolds settled down to try to figure out what WAS going on.

It wasn't easy, but Garrett tried to attack it logically. He gathered together his best case reports and looked for a pattern. [As an aside, I got a historian's thrill one day when working in an archives, I turned a page and there was one of the very sheets of paper that Garrett had used to make his first-ever UFO analysis back in August of 1947. A picture of it is on the upper left. Garrett marked his 16 best cases with big circled numbers, as you can see, and, holding that document, I could imagine him at his Pentagon desk staring at it in search of the meaning.] Garrett thought that he found that meaning, at least in part. ----------------------------------------

The flying disks were real. But whose? And were he and Reynolds wasting their time chasing something that was just a piece of our own technology? They had good reason to wonder. During the world war, the high brass had been in high anxiety over what the foo-fighters could be [as was describes a couple of posts ago]. The same thing had happened in 1946 during the so-called Scandinavian "Ghost Rocket" mysteries. The top dogs in the Pentagon had put severe pressure on to try to solve these mysteries, and had kept the pressure on a long time. Not now.

For some unknown reason, after a brief flurry of pressure, the High Pentagon had gone silent. To Garrett this could only mean one thing: they already knew what these flying disks are. This situation is discussed in the FBI document in the middle above. This odd circumstance is nick-named "The Silence from Topside", and has not been explained to this day. Some UFOlogists feel that the Topside went silent because they knew that the flying disks were not Soviet...they were Roswellian, that is extraterrestrial. There is no documentary support for this, only that it is the only hypothesis brought up so far which would adequately explain the "silence". ---------------------------------------------------------------

Garrett of course was not thinking in those terms from his limited viewing point. The "logical" thing to him was that these devices must be a secret project of our own. To check this out, he got his boss, Taylor, to send his original "estimate"/analysis around to the various high tech elements of the armed forces to enquire as to whether the described things were their's. [The letter is on the lower right above]. Garrett was shocked to find that no service's technology divisions were engaged in research on any craft such as that described.

Desperate now, he tried one last shot: he got Assistant Director of Intelligence, Brigadier General George Schulgen, to write to General Twining at Wright-Pat and ask again: Is this ours? and what do you think about it if it isn't? What Wright-Pat said and did I'll tell you in the next post---it's all readable right out of the AF's own documents and no speculation is needed. You already know part of the answer: they weren't ours, and there is no technological explanation for these apparent flying craft known even with today's hindsight.
Posted by The Professor at 8:34 AM