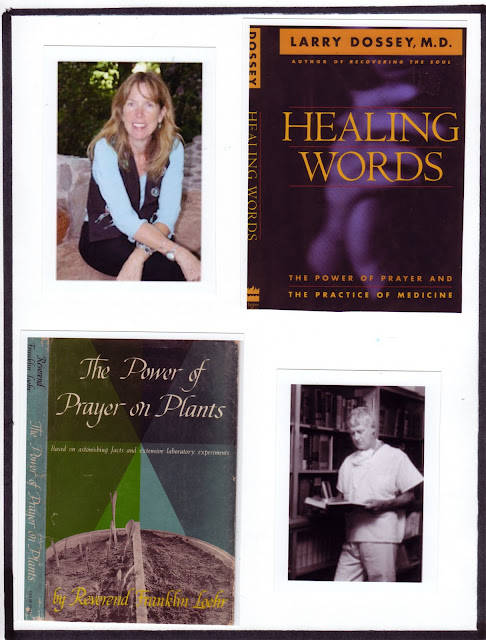 From about the late 1960s, and inspired by the testing results of Justa Smith and Bernard Grad, the idea entered the nursing profession that it might be possible to aid in the healing of their patients by utilizing a similar "intentional" therapy. Thus began an analog to the "laying on of hands" type of healing practise.

It was/is called "therapeutic touch" although it usually does not involve touch at all. The process involves placing one's hands above the patient's body and intuitively "sensing out" areas of illness and intending for these to achieve harmony and wholeness, that is "health" however that is defined. Models of what possibly could be going on here are several, and, frankly none of them are based on any evidence. But the practise of therapeutic touch DOES seem to "work", so whether we've come up with an accurate model may be a somewhat irrelevant thing.

The practise was a nursing secret of sorts until Janet Quinn (the pretty lady at the upper left) began to bring it out of the closet with a PhD thesis at NYU. As the idea became more public, the conservative medical establishment [surprise] became irate. This was tantamount to witchcraft and "shamanistic folk nonsense" as far as the "rational" doctors were concerned, and a blot on the profession. It didn't help that the idea was growing from nurses rather than their own esteemed selves. Nurses were women, too, Lord help us [by the way don't think that stupidities like this don't play a big role with the "neanderthals"].

The trouble for the materialists was that the xxxx thing worked. [though many refuse to admit it]. I saw a documentary about 10 years ago, or less, about an impressive test of TT. It was held by medical professionals in a large urban area [San Francisco or Sacramento, I believe]. The research team got volunteers from the public to agree to help test "a new secret government device", allegedly a camera for seeing and picturing very fine biological details. That was all B.S. of course, but the ruse was so that no volunteer would know what was going on and, because it was secret, wouldn't ask.

Each volunteer had a small wound placed on their shoulder [revenge of the Bernard Grad mice]. They then would, each day, come to the testing lab, where they would place their shoulder up to a "hole-in-the-wall" where they thought that the secret camera would photograph what was happening with their wound. They were photo'd yes, but what was really going on was that some volunteers had TT practitioner nurses on the other side of the wall "intending" healing, while others had just a person sitting there not intending anything at all. The results were overwhelming in favor of healing happening at a faster rate for the volunteers in the TT group. Of course, no amount of facts can ever convince an "impossibilist". ---------------------------------- 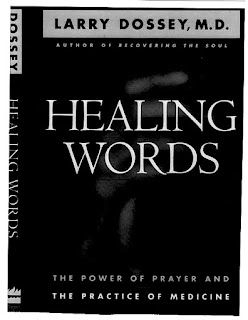 Larry Dossey chronicles much of this sort of non-traditional success [though not the exact study I just described] in his wonderful books, such as Healing Words above. These paradigm breaking studies are all part of the complex of non-physical healing practise, but the most exciting are those, like TT, of the class of "distant healing". The establishment at its leadership levels is really threatened by this, but at the grass roots a change seems afoot. 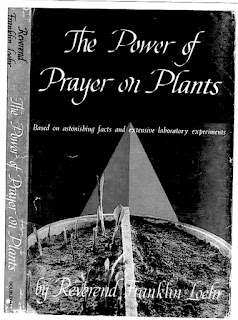 Well, how far does this go, and what's happening? Reverend Franklin Loehr wrote in 1959 [sort of early for this sort of thing], that his congregation could affect the growth of plants through the power of prayer. Loehr was trained in chemistry and had an avid interest in science. He thought it would be "interesting" to see if his parishioners could accomplish a community-based "scientific" prayer effect, and rev up the congregation's zeal at the same time. His book [above] alleges that this was so.

This is a tough one for me as it is hard to imagine GOD caring that much about "healing" corn plants. But I think that this may have happened for the following reason: in the 1960's either NOVA or Nature TV programs did a special on the plant kingdom. Both programs were/are notoriously hostile to anything outside of establishment cant. The program spoke of a lot of great orthodox plant science, and then took on and mercilessly destroyed the "talking to plants" claims of Cleve Backster ( I think that these claims are errors, of an honest man, but do not need to be subjected to disrespectful treatment as the program did). Then along came Reverend Loehr. Surely another mocking dismissal. But, no. They ran a test and Loehr passed. The plants he "intended" health for DID grow far better, even under "science's" watchful eye. You could almost hear the embarrassed swallowing. I still find it unlikely that GOD did this, and more likely that Franklin Loehr himself has a gift. Either way, it is in the realm of the spiritual. ---------------------------------- 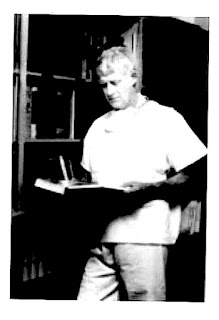 Many things are, however, not. William Nolen made that clear. Dr. Nolen [left]] was one of the rare skeptics who made an honest effort to find out what was going on with many of these claims [most skeptics make no effort at all, and simply pontificate, often outrageously so]. Nolen has my respect for what he did--he did not, however take on the best cases of alternative medicine and so his survey can't be called definitive. But he did find some charlatanry [that is easy] and he found a lot of honest wishful thinking. His book is still worth reading, as an antidote to too much naivete. It is what got me to say to a good friend who had gotten early stage cancer to be careful.

He had decided to "go native" and reject modern medicine and head for a Latin American country and a folk healer where he would drink some bitter concoction and meditate a lot. Well, I'm not really against that, except for the rejection of modern testing, monitoring, etc. This thing creeped me out because his wife was assigned by the local healer the exact same "treatment" for arthritis. Cancer tends to be a failure of the immune system on the not-effective side, where things like arthritis are mostly the opposite problem---maybe the bitter herbs were mysterious "balancers" no matter what your problem was. Still I railed against him ignoring the monitoring at least. And he promised he would pay attention. Today he insists that he is completely cured. I'm still in doubt as to why. I guess there's still a scientist in me---and that's alright too.

Posted by The Professor at 6:37 AM