John von Neumann and the creation of the Universe 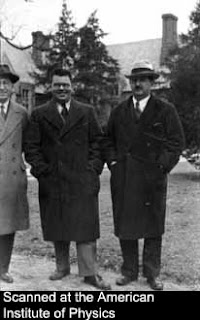 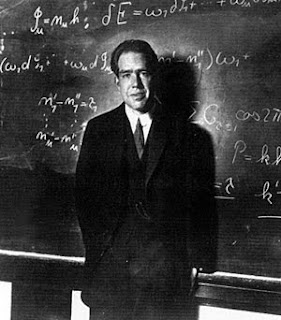 Once upon a time, about twenty years ago, I took a year off from teaching and traveled the country looking into some of our best depositories of knowledge. I was looking for information about unidentified flying objects ( I'll tell you about that later. It's a good story and a true mystery. Almost every sensible thing that you've heard about "them" is true, and can be read directly off the government and scientific documents.) 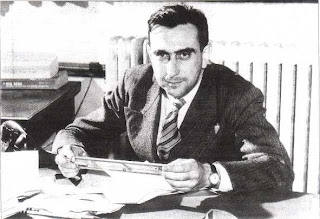 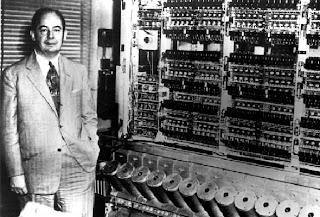 Turning over one page, there was a picture of three men. Now, all persons are important, but on some criteria these were some of the most important people of the 20th century. The first of them was Niels Bohr (his picture is on the upper right). Bohr is usually considered to be the father of Quantum Theory. QM is too tough a subject to go into here, but we should know a "little" about it. Bohr and the quantum physicists say that, at the most fundamental level of physical reality, there is an "indeterminism"---that it's not an iron-clad sure thing that something on this smallest scale is going to be exactly "this" or exactly "that". There's a "fuzziness" down at that level. It's a very big deal. That indeterminism, that fuzziness, is what allows the possibility of Freedom--a non-forced "choice" of alternatives--to enter our Universe. Einstein absolutely hated this as part of physics, but Bohr was the one who was right. The QM physicists talk about this fuzziness becoming concrete reality once the indeterminate state is "observed".

The third man in the picture was John von Neumann. Contemporaries and colleagues thought that von Neumann was the smartest man in the world. Period. Not excepting Einstein, or the other two in the photo. Very early, von Neumann had an intuition. He understood, as much as anyone, what Quantum Mechanics was saying and was contemplating the fundamentalness of Observership. Von Neumann, unlike most of the others, was a religious and spiritual man. To him the solution to much of this was obvious. "In the Beginning" working with only the disorganized chaos of what physicists today would call the dynamic roiling sea of mini-black holes (what the ancients called the "Primordial Chaos"), some Prime Observer observed and organized The Creation. Put another way, GOD collapsed the Wave Function. And in all the "infinite" ways that hidden collapsings have happened since, the Prime Observer, the First Consciousness, has been maintaining the stability of the Universe through the Original Laws (which Science studies) ever since. Of course, it takes a spiritual man to stomach this, let alone come up with the idea. Most scientists are horrified, even though the thought "solves" in some way how the Original Act that produced our Universe took place, and the utilization of that idea in no way is incompatible with studying everything that resulted from it (that is, one can still do all the "science" one wants). For von Neumann, Spirituality, GOD, Freedom, and a strong role for Consciousness were not incompatible with scientific fact nor discovery. They are not for me either, and I thank our brilliant Earth-traveller for giving me one more reason for believing so.
Posted by The Professor at 11:15 AM