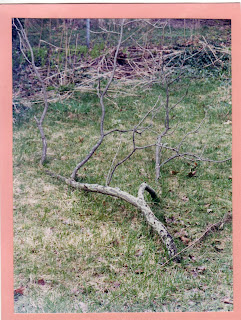 For a few years I used to spend time in my back yard just relaxing and staring at nature. The favorite subject was a line of six very large walnut trees that had once been part of a fence line of a former farm (before all the area got built up in response to the growth of the University). The trees were entertaining. They were a Road-in-the-Sky for a large and raucous squirrel population, a frequent landing spot for golden finches, woodpeckers, and even hummingbirds, calculating their next moves. They were, despite the nature sounds, a source of peace (I believe that it was really BECAUSE of the nature sounds).

I once read a whole book of Tolkien while sitting there in their presence, but mostly I just stared about like a child. Occasionally something odd happened. I was looking at the new crop of walnuts hanging all over one day and thought: I'm out here a lot. I wonder if I'll ever see a walnut actually fall? At that exact moment, and the timing is true or I'd never credit this as an "odd" thing, a squirrel ran down a branch and "picked" a walnut (that's the only way I can say it) and tossed it at the ground. Startled I thought, well, THAT was interesting. There were other things like this but that one was pretty unexpected. -------------------------------------------------------------

There was a spot in the air where two of the trees crossed their branches and the crossing left a clear area or "window" to the sky. In the seasons when the trees were fully leaved this was the only portal through which you could see clear sky beyond. Childishly, I called it my window to heaven. It was formed by six branches, three from each tree, as they crossed in a rough hexagon. I had at the time a good friend named Sano (shortened from a long Italian surname.) He had contracted asbestos poisoning from work way back in WW2 and it had begun to express itself late (as mesothelioma often does) in life. It was lung cancer. Sano was the most spiritual guy I knew. He left this world with a smile and a glow. On the evening that he died, we had a wind. In the morning, I went out into the backyard. There was a limb down. It was one of the limbs of my window to heaven. It's the branch you see in the picture above. It's Sano's branch. Foolishly, I believe that in some arcane way he "knocked it off" for me on his way.---------------------------------------

I spent a lot of foolish moments with the trees. One day we were having a perfect wind. The six of them were rocking back and forth as if they were one thing not several. As we humans are prone to do, a "face" was showing up in the open spots of the branches caused by the motion of the wind. Feeling careless now of my foolishness, I said: Who are you? Something actually seemed to respond. It was one of those "small inner voices" type things which you can't really be sure from where they come. This one said, quite clearly: "I am very old. Yet every moment I am young. I drink the Sky. I eat the Land. GOD SINGS in me. I am Alive."....I hauled myself off the ground and ran into the house to write it down. What this was everyone will make up their own minds upon. Maybe I was just a spontaneous poet. But it certainly didn't feel that way to me. It felt like, for one unusual moment in my life, something outside my experience entirely had communicated to me.

Could that even be possible? The First Nations peoples in this area of America have the concept of the great Life-Giver and Sustainer Spirit, Manitou. The circle of life includes many things, and each important element of that circle (ex. a species; a small area ecosystem, like a forest; etc) itself has a Spirit Representative. It is a Manitoug. People on Vision Quests claim to "meet" such spirits. Could the poem be not mine, but that of the Manitoug of the Trees? -----------------------------------------

Perhaps that stretches us too far, but, I think not for me. I used to hear the little "thumps" of the walnuts falling in the early fall and they seemed like small heartbeats. One day, when I was inside, I heard a monstrous "WHUMMMPHHH!" Outside I saw that one of my neighbors had decided that they didn't like the trees littering their perfect lawns, and were cutting them down. They had convinced the neighbor next that this was a good idea, and the other half would come down that day too. I couldn't watch this, as the cutter high in the tree chainsawed large roundelles of wood from the trunks and let them fall. WHUMMMPHHH! WHUMMMPHHH! WHUMMMPHHH! It was the last beating of a great heart dying.

I had to take a long walk---somewhere else. Today there are no walnut trees there and no walnuts to bother the neighbors as they happily mow their lawns. There is no window to heaven. There is no Road-in-the-Sky. Just on my side of the property line there is a little tree---a walnut tree---the product of one one those little heartbeats long ago.
Posted by The Professor at 10:43 AM