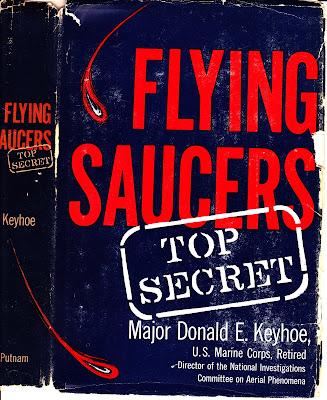 Things have been cramped lately and it has been hard to move forward on the FSRs and the blog. Sort of out of desperation, I picked up a few texts and thumbed through. One was Keyhoe's TOP SECRET published in 1960. Since that's where we were in FSR I thought it a good coincidence. On top of that, the previous owner, [probably a NICAP person], had attempted a case index for the book and left it inside the back cover. Thinking that maybe someone out there could use the index, and thinking that maybe I could "spout off" a bit on the book without having to read the whole thing, .....well, here's the blog entry. {The four "illustrations" below are the previous owner's index.} 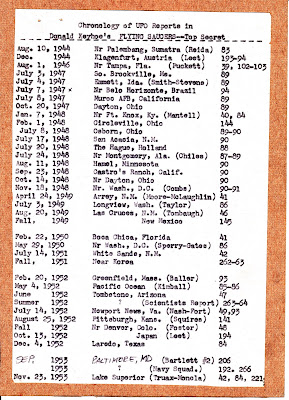 This isn't going to be a well-read and well thought out book review. It's an excuse to comment about Keyhoe et al more or less out of memory of the time and historical context. For those of you who are extraordinarily hip, you can survey the case list and immediately determine something about Keyhoe from what he was willing to put into the book. To begin: the list is "pretty" good, but not perfect. The vast majority of the book's cases are on it, and there aren't many errors. So it is a good gauge of Keyhoe's thought. I count a little over 130 cases listed, but there are a small number of duplicates. Lets call it about 130. Of these 80++% are "safe" cases: mainly "objects", "lights", Radar/Visuals [Keyhoe really likes those], and a very small number of CE1s. 10% [13] cases are traditional CE2 cases [not surprising since we're past Levelland et al, and Keyhoe liked all that.] Beyond that: essentially nothing: UFOlogy stopped at about 1000 yards. There were two CE3s mentioned: the Reinhold Schmidt hoax, mentioned very deprecatorily, and the Squyres case of Pittsburgh, Kansas---brief but not panned---perhaps the beginnings of a crack in Keyhoe's anti-CE3 armor? There was only one class of case types which we today would call risky: Keyhoe was all in on collisions and "near-hits-in-the-air" and extended that idea to explosions and fragments of possible UFOs. Keyhoe was, in this, the ultimate "nuts-and-bolts" guy. UFOs were metallic flying machines, period---nothing more. 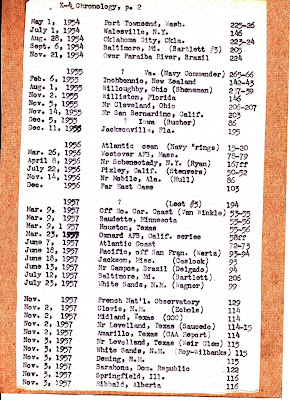 We might chide Keyhoe for lack of imagination, a sort-of alter-ego to FSR at the moment, but he was constricted by two rather understandable elements: his own history as a military guy and a gee-whiz technologist [who naturally was sucked in to thinking in "understandable" mechanical terms], and the pragmatic need to be "error-free" if he was ever to get the support of congress. Keyhoe was no scientist--he didn't understand much about the real "frontiers" of physics et al--and he was certainly no metaphysicist. Where was he going to get any imagination? Keyhoe lived with the concrete and by gum, concrete were what the UFOs were going to be. Nothing's more concrete than something running into you, and so UFOs running into our planes, and near-hitting them was the extreme end of Keyhoe's model of reality. 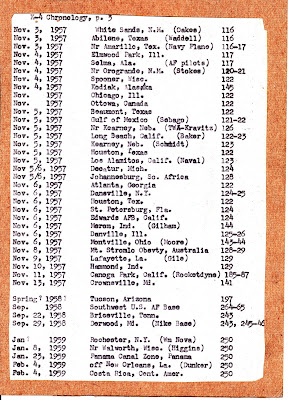 But I was nevertheless surprised by him in this book. Keyhoe was beginning to stretch himself in ways that I hadn't realized he was capable of. I believe that the stretch was because he too was getting impatient to solve the big picture. Keyhoe, even Keyhoe, needed a big theory and therefore a big answer. Where he was going was far out in space and far back in time. As to Space, he reflected back on the essay that he had been shown by Al Chop which had been written by a Pentagon Intel Colonel named Odell. The essay painted a scenario of a dying world and the need for an advanced civilization to move en masse to another "colony" world--even if that world was already occupied. This intrigued Keyhoe because it was one way to explain the huge amount of UFO activity in our skies---they were surveying the situation and their prospects. They were here in numbers also because of our nuclear activities and the rest of the aggressiveness they then discovered. Any near-hits and collisions might be accidents or they might be deliberate--even tests. As to time, and here was the bigger surprise, Keyhoe gave apparent credence to the recently publicized Piri Reis map. What he was wowed about was the information that he received that the map had to be based on data many centuries old [dating at least back to when Alexandria was a major center of knowledge] and had to have come from an aerial survey [he says that in the book--much to the dropping of my jaw]. The survey of Earth as a possible colony world could have been going on for millennia. I trust that he didn't include this idea in his letters to congressmen. 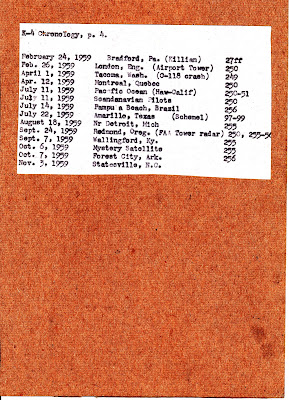 Keyhoe has himself and Frank Edwards sitting together wowing each other with these ideas at the end of the book and vowing to do all they can to prepare the public for the big admission by government that was [as usual] just around the corner. Well---wrong again. In true dime novel fashion he has himself driving down the street towards the US Capitol and reflecting on his fellow humans. "None of them, I thought, would be concerned with more than their own familiar world. Yet each one, all the millions on Earth, stood on the threshold of something strange and tremendous. Inevitable as the rising sun, it would change the lives of all, for good or bad, irrevocably. How it would happen, when it would come, there was still no way of knowing. But one thing was certain, beyond all doubt. The world would never be the same." Well, Don, generically, I guess I can agree with most of that.
Posted by The Professor at 4:37 PM