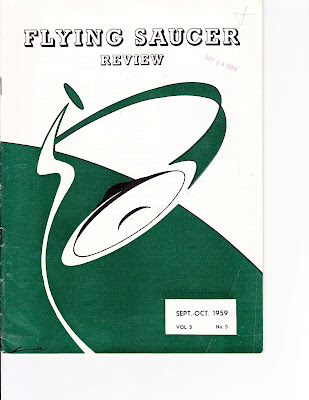 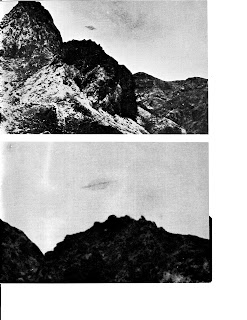 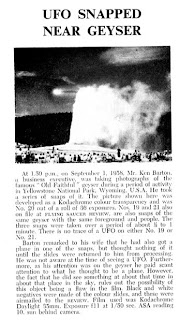 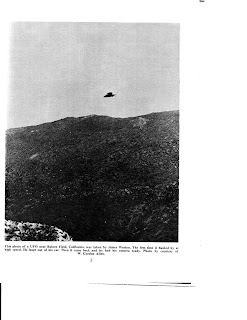 The doubtlessly phoney Adamski-like photo on the left was presented in FSR as genuine [Trench, the editor, had become an Adamski fan], and it will serve to illustrate the last case reported upon here. This incident was an event in 1956, just now being reported. This was from Dublin, Ireland and was seen by a husband and wife late in the evening. They witnessed a brilliant light moving down out of the sky towards their house. Initially it seemed to be a large ball, like a glowing globe. But then "inside" the light seemed to be a metallic ship. It was a saucer upside-down, with a dome on the top and it seemed to be spinning. IT HAD THREE BALL SORT OF THINGS UNDERNEATH. [Good lord preserve me. I just hate it when this happens.] For those of you who are hip to this you will recognize the three big-ball "landing pods" as the characteristic feature of the disgraced George Adamski hoaxed photos. BBBBBBBBBBBBBBBBBBBBBBBBBBBB. Come on, Universe! Make things a little easier!. This case from Dublin, little as I can read, is presented as a perfectly good close encounter by witnesses who seem to be making no extreme claims and seem to be telling a calm credible story---but with a "bad" element in it. And this is not the only time I've been confronted with an object description with the three BigBall pods. What's the answer? I am NOT going to revise my opinion of Adamski--I have a load of material which convicts him. But what else? Are our two Irish folks liars? Did Adamski hear about "good" BallPod cases and make a model to photograph? Did the aliens think that this was great fun and run out some imitators? Did our "little people tricksters" do it? Well, alright, whoever you are--good job, you got me on this one.......you know, "they" ARE "out there" just waiting to mess about.....just as I was in the process of making the last corrections to this, something took me off the internet. Thank you, whatevers, for not dumping the whole post. I AM trying to get you some publicity afterall.
Posted by The Professor at 3:08 PM