Sweeping Up More Encounters and Worrying about Size

We've been trudging across the timeline from the early days up through the 1920s (at least as far as my Leprecat sightings are concerned). The past posts have presented in one form or another around 50 incidents. Let's present a little preliminary spice.

The top incident in the sidebar was mentioned as part of the 15 case list at the end of the last post. It is unusual in that it happened to a famous man, the writer William Allen White, and that it describes a very small group of beings.  These were dancing circling little beings of three or four inches tall. The incident was brief and the beings were grayish in color, and their music and dancing continued for some time. Finally they began to fade. After a while they had faded away completely.

The middle cartoon represents a case from Devonshire in about 1915. This encounter also had a very tiny entity --- the witness described the emergence of a tiny man garbed in green, with a red conical hat. He also seemed to have greenish tinted skin. He was swinging on a leaf for a while, and then just disappeared. Five inches tall.

The third and lower cartoon is a representation of the case from the other day wherein a group of gnomes seemed to act as protectors to smaller fairies --- the latter of which seemed smaller than them, perhaps one foot tall. These fairies were non-winged floating beings of small size.

These cases are of much smaller than usual entities and introduce the concern which, whether I like it or not, can be verbalized as: Is there any pattern in these cases or not? Is there any sort of commonality which might give me any insight into this difficult mystery? Can what little data that we have get us any assurance that the beings in these incidents are "real" and in what sense? I can't help it. I would REALLY like to learn SOMETHING more "solid" evidentially about this business. I'm almost certain that I'm going to fail, but in a Fool's Errand I'm going to start by trying to estimate heights and graph them. I haven't at this stage of this moment of  typing done any of the height logging, but am about to press "save" and go off and do it.

OK. Done, in some sense of that word. (took about a day)

What was "done":
I looked through the cases as were previously described in the early posts. There were a little over 50 encounters.

I looked for the best words used by witnesses to describe entity heights. Sometimes you get lucky and the witness says a concrete word or phrase ("two feet tall") and you start thinking that maybe you're about to deal with a crisp data set.

Most of the time you aren't that lucky. You get a range, or you get a comparison (ex. "child" or "Small children") and then you're guessing. Many cases (not so much in the ones I described, as I picked them deliberately to be a bit more detailed), you are really out of luck entirely and can't use the incident for anything like this.

But in our set, we have 53 cases that, in my opinion, are usable.

About two-thirds of them are graphed to the left. All of these have pretty solid measurement related words, or something else about the description that makes me feel as if the graphing is at least mildly respectable. 37 cases. The remaining 16 will be talked about in just a moment.

The graph is fairly strong in the 2-to-3 1/2 foot range (more on that as a category later also.) It also has a fair representation in the normal or near-normal height range (this is 4-to-5 1/2 foot tall ---- 5 1/2 foot was the normal average male before the modern age's nutritional driven 4 to 5 inch growth spurt took place in almost every country.)

There are two giants and few very smalls. I've left 1 1/2 foot tall as a gray area, as my feeling for those cases is that they could easily drift into a taller or a smaller category (who knows? Just a feeling.)

In one sense it is nice to see a peak of some kind, but the still small number of cases makes this less than confident. The peak is however pretty much where general commentary about the Little People say it should be.

Note that there are (up to the time period that we covered c. the 1920s) almost no tiny beings and (as an aside) no wings at all.
I'm not saying that other folklore divers wouldn't find good cases of that type, but so far I have not.

But what about the "Missing 16" incidents? 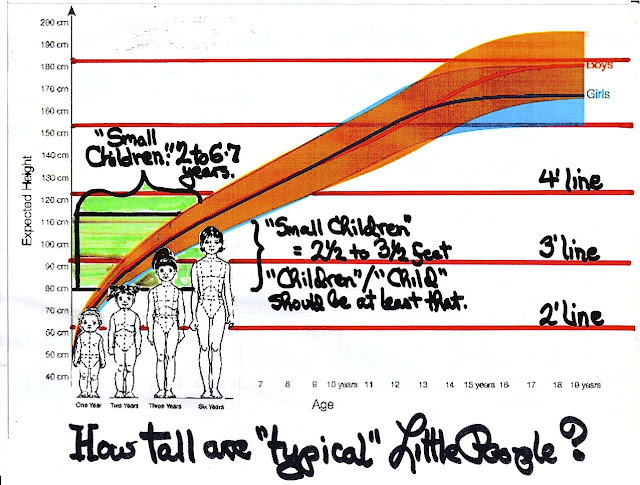 The Missing 16 share a common characteristic: they all have words in their descriptions stating that the Little People were the size of "A child", or "Children", or some other words aimed at humans who are not adults in stature. 16 cases. That is a big enough number to drive me either crazy or to try harder to get a decent estimation. I'd rather do the latter.

The graph above is the growth curve for children in the United Kingdom for the current era. Going back in time, one would subtract about 4 inches per curve. (until you get nearer birth, where the difference will decay to a smaller number.) What it shows is that if one was to refer to something as the height of a child (and not a baby), one is talking about the 2 1/2 foot to 3 1/2 foot range. The graph says that's correct, and the Little People testimonies seem to say that's correct.

This is then what we get.

The 2 to 3 1/2 foot peak shoots up far beyond the other categories and begins to look like it might be something real.

I threw out two cases for this second graph by the way (the "four foot" bent old woman of Paris, who seems FAR more like an apparitional haunting; and the "three and a half foot" Bourneville entities with the caps with antennae and the "house" which flashes away in the air, because I can't get any handle on that thing to compare it too any other Faery case.)

So there's 51 left. If you toss the next most peculiar thing of your choice to get to 50, you could make the claim that exactly 60% of these cases are in the "Child" size category ... and thereby very compatible with "tradition."

I don't have much more to say or CAN honestly say about this except that I'll bet with near certainty that this graph changes significantly as we penetrate deeper into the 20th century and on to the 21st.

So next time I'll go back into Leprecat (the thirties or even a few leftover late twenties maybe, and on to the WWII period.) 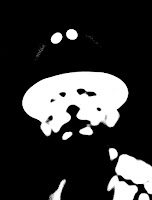 brilliant.
fantastic.
couldn't have thought it out better myself ...
wait ....

Posted by The Professor at 5:32 PM