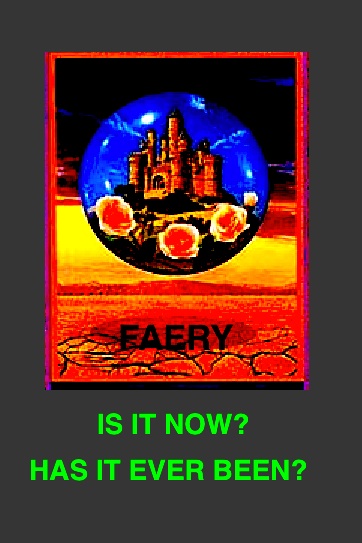 (Still in Leprecat pp. 2-3 ... and whatever follows. "Trying to mop up the pre-1900s" I guess is the best way to characterize my frazzled approach to this.)

OFF WE GO AGAIN. 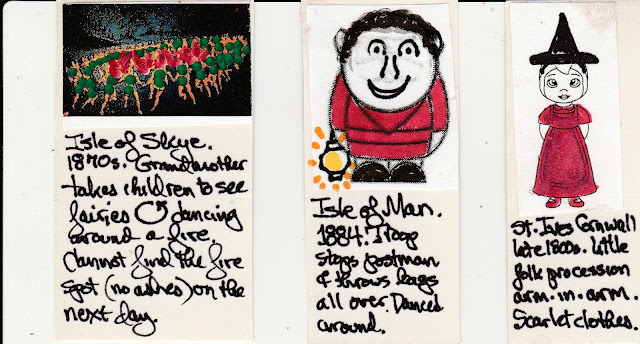 Well, it's a fine bunch of folks we have here.

ISLE of SKYE, UK 1870s.  The story comes from Katherine Briggs who, along with writing her many charming books about the fairy world, also did the field work of actual interviewing. In this incident it was the wife of one of the participants (deceased) that told her husband's encounter. 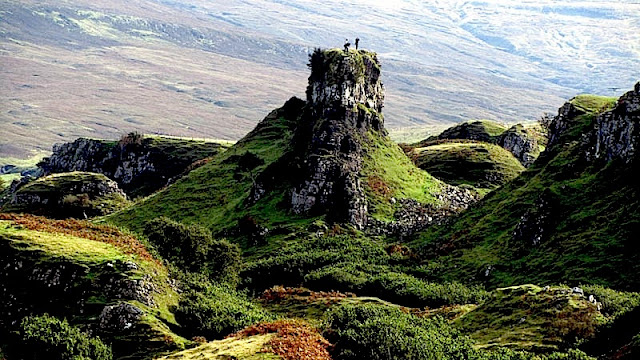 When I began collecting these reports, it was a powerful hunch that the northwestern islands of Britain would be, along with Wales, the best shot one would have to have one's own encounter. Now, after looking into this case, places like the Isle of Skye scream "Faery" at a glance. The event to be described did not occur in quite so wild a place as the above pictured, but all of Skye seems touched with Faery green. 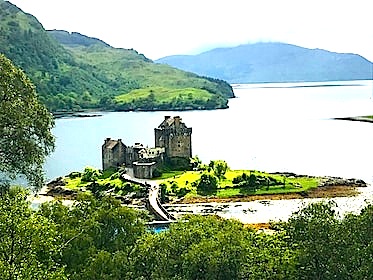 In a village on the island a young boy (the witness referred to previously) and his sister were being watched after by their grandmother, as their mother had to be away at the next village. A third child joined them and also another elderly woman dropped by to visit the grandma.  As the playtime wore on, the children were behaving somewhat "negatively" (tired and ornery)  outdoors. Grandma felt that she had to intervene before this got out of hand. And so did her visitor.

This visitor happened to be not just any visitor, but was what was then called a "Wise Woman." She might have been suspected of being a witch in former less-sane times, and she had "The Second Sight." She went to the children and asked them if they would like to see something unusual. And of course they would.

Hand-in-hand, the four of them went for a walk down a path and across a glen (maybe one of Skye's famous Fairy Glens), and sat down on the grass beside a stream. Shortly, across the stream there was a fire burning. It was dusk, and the fire seemed bright, and then, all around it, fairies appeared and began to do their circling dance. The Little People (their size is not described) were dressed all in green and their dance was enthusiastic ("merry").

I suppose that after a while the vision went away and the Wise Woman and the children went back home. The children returned to the site with others the next day but there was no sign that there had been a fire. The young boy, when older, and he a minister, told his wife that he felt that the only reason that they saw the fairy circle dance was because the Wise Woman was there and they all held hands. Whether that is true, who can say?

But it is a pretty decent case.

This tale was gathered by a lawyer who was visiting the Isle of Man, and following his passion for collecting folklore. He was a member of The Folk-Lore Society and was happy to write up the report in their journal in 1902. The incident happened in 1884, and the interview was taken by the lawyer three years later with the prime witness. That is a pretty good beginning in the credibility department (since our reporter also vetted the witness to a degree and thought the man "sober and honest.")

The story: The witness was a postal carrier. His typical job was to drive his horse-drawn cart from a central office around the small towns nearby and to collect the mailbags for their later delivery. This job was a late night affair, covering hours around midnight and the early morning period.

He was well into his route and had many mail packages on board. He was due back at his home area at 1:30am but did not arrive until 5:30. Here's what happened: coming into his home stretch, only six miles from home, he came across a troop of fairies in the road. This troop was dressed sharply in red uniforms and many carried lighted lanterns. Whether they were offended by the entry of the mailman and his horse, or whether they were just looking to make mischief, they swarmed upon the cart, attacking the man and grabbing and throwing the mail bags all over the road. They began dancing around the bags riotously, and pushing the helpless postman around when he attempted to make them stop.

This physical harassment went on for four hours, only ceasing when the Sun began to cast some dawn light at the horizon. It took the exhausted postman some time to regain his wits and he then began to retrieve his mail and go on with his route. With this the story ends.

Hmmmm .... a good well-known witness, interviewed by an intelligent interviewer, neither or whom added any dazzling fairytale-like details to the story. In fact, this is a posterchild for the typical believable tale: an astonishing interaction which some other reality, which has the feel of an accidental intersecting of two lines of reality, and which contains no "profundity", or messages, or moral.

A good one, I think.

The source of this story seems good, or at least probably good. Here's what I think that I know: The primary publication of this is in a book by AKH Jenkin. Cornwall and the Cornish, published in 1933. The prime witness is named as an old lady named Mrs Rebecca Noall, who had died in 1927. Jenkin was not the interviewer, but got the story from a lady named Mrs JH Hodge. Hmmm.... a tougher nut to crack than ideal.  I still think that the chain of investigation is OK; here's why:

Jenkin had just finished a book on the history of Cornwall mining  and it was considered a good piece of work. He wanted to follow that up by a book on Cornish folklore (this book.) The locals seem to have felt that he was a good scholar, and the Introduction was written by a famous local lawyer and politician, Isaac Foot, who was also an expert in mining. Mrs JH Hodge was a member of a very well-known entrenched St. Ives family, and her husband (I believe) wrote a piece on folk culture in the regional journal of the time. Either Rebecca Noall or a relative also wrote such a piece. The picture that I get is one of a trusted author getting information from a good folklore source.

So, with some confidence, the Tale: It was common in the day that many of the girls of Cornwall worked jobs late into the evening. Rebecca was no different. Her father usually came by at eleven or midnight or so to escort his daughter back home. Thus father and daughter were walking back to their home when the following occurred.

At a lonely spot on one of the streets, they saw approaching a troop of Little People. These were marching on both sides of them, in precision as in some ceremony. They were arm-and-arm and dressed alike in scarlet cloaks with tall peaked black hats. They proceeded "with the greatest decorum and dignity." Rebecca's father whispered to her that she should remain absolutely silent and show no sign of recognition. Thus the trooping fairies passed "safely" by, and father and daughter went safely home.

Again, seemingly a good one. Good witness (and apparently multiple); fine closeness of encounter; good if not full detail (ex. no specific size stated but "small"); and the feeling of an accidental intersection of lives. (with no grandiose message nor moral.)

I've run out of the original group of three illustrations, but let's go for another anyway. 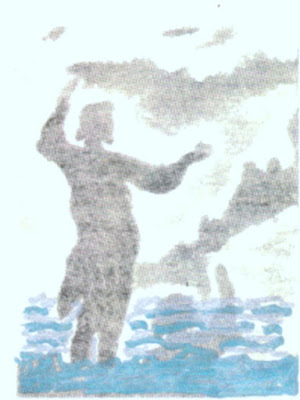 
This one is difficult to tie down as far as the story collector is concerned. Although seen in Elizabeth Andrews' Ulster Folklore (1913), the source is really the 1858 Ulster Journal of Archaeology Volume 6. The collector is unnamed due to a very puzzling (to me) and unhelpful cultural habit of authors remaining anonymous.
(I couldn't even find a set of initials.) The author says that he went to Ulster on the request of the editor of this journal to do just this sort of tale retrieval, so maybe it's OK. The witness was then an old man, but one of the two primary witnesses and the tale vivid and oft-told.


The incident: There is a small village near the mouth of the Bush River (about six houses only) where lived farmers who also fished for salmon in the nearby Bush. Two young men were as usual looking after cattle grazing, and it was around dawn. They'd just gotten up to see after the cattle. The river was extremely high, far higher than almost any other time and in full flood. The whole atmosphere was violent with wind pushing tides up the mouth of the Bush with violence.


"We stood looking at the wild picture before us, when all at once we saw the tall figure of a man standing on one of the pillars in the middle of the Bush, with a long grey cloak on him .... " Who did they think that he was?


There is a legend in this area of a giant from pre-mediaeval times who came to Ireland to fight with another giant of a man, Finn MacCoul. When Finn defeated his adversary, he invited another local giant to a feast, the Grey Man of the Path. I don't know a lot about this character, but he seems to present an awesome figure (7 to 9 foot tall) and a supernatural danger.

This being, standing in the river on a stone pillar (which was under water), and facing into the tempest, was what the two young men thought they saw.  One was scared witless by the vision; he cowered. The other was shocked but still called out. The being didn't move at all. Somewhat later, it moved, but not yet to face the witnesses. The cowering witness demanded that they leave "Come away, Aleck, we're too long here!"

They went home shaking. Both felt that they had seen the giant Grey Man.

Did they see a folklore giant? If so, it's our first in this run of stories.

Till next time, folks.