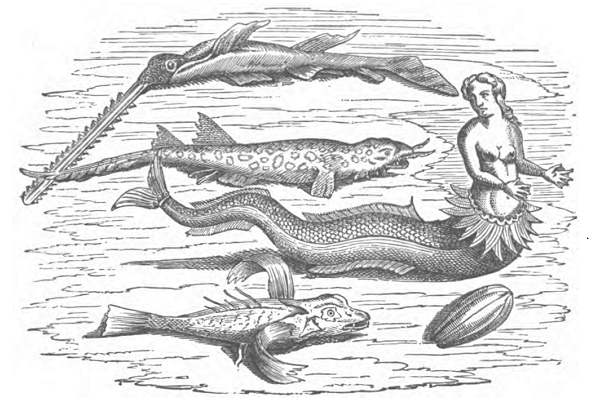 This will be short. It was inspired by coming across a letter to Bob Warth after Ivan died, wherein a SITU member wanted to comment about an exchange that she'd had with Ivan about news stories in her area which made mermaid incident claims. The member had promised to try to get up to the exact city where the paper had published the stories [there were about three different sorts of claims] and get copies of the clippings for Ivan's file. And the letter at hand was that member's successful accomplishing of that years later.

I am actually surprised that Ivan had a file on Mermaids at all. More on that and why after I give you the one Mermaid tale that was in this letter that I liked a great deal. 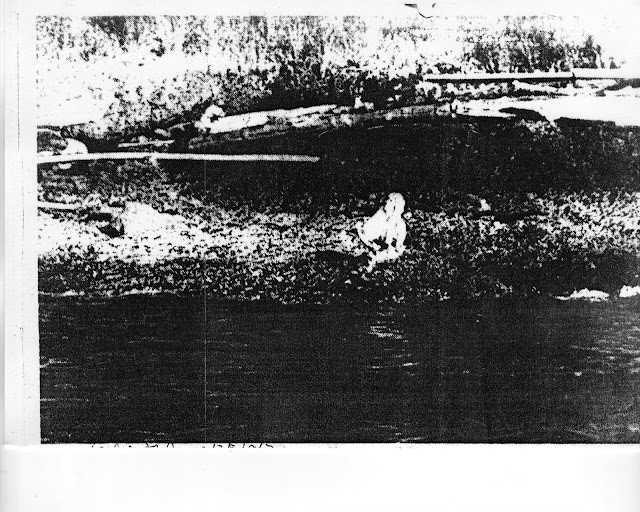 This lady was writing Warth in 1984 from the Vancouver area and reflected on her original letter way back in 1967. There had been a small brouhaha about Mermaid sightings then, including an alleged photo of Her Wateriness lounging on the shoreline [above]. Marion Fawcett had wanted the lady to get a better copy of the picture, but she failed. Now years later, she had stumbled on to the news stories again, plus one other. She thought that SITU might still want them for the files [there is no evidence that in 1984 anyone was still filing anything at all there].

The Mermaid-on-the-Shore is certainly a college guys' prank, and pretty uninteresting [to me anyway]. A second story from that 1967 date [from a different location: Sayward Beach, Cordova Bay --- the college boys' "mermaid" was at Cowichan Bay], however has a little more going for it. For one thing, the witness was an adult housewife who lived at the shore and knew it well. She described the event as her walking the beach and beginning to come up on a "girl suntanning" at about 200 feet away. But she then noticed that the topless blonde sunbather had a tail for a "bottom" which threw the whole thing into Magonia. The lady tried to run to get closer, but the Mermaid spotted her and slid over the rocks thereby and was gone when she arrived. The witness refused to believe that this was an actual Mermaid, but rather someone playing a joke of some kind [note that she had no good reason for saying that other than an attempt to maintain her own sanity]. 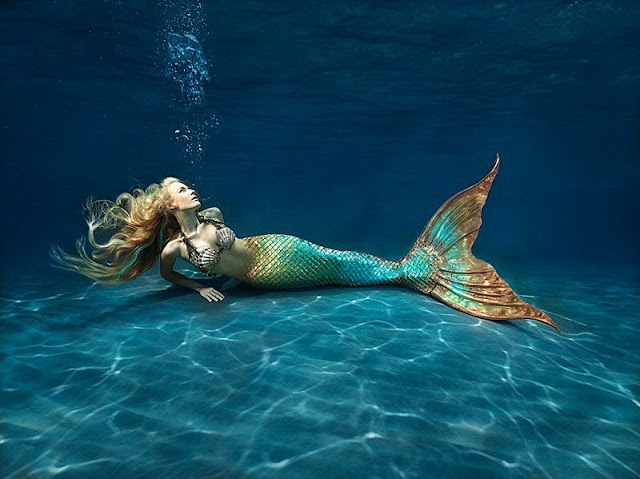 But that was not the story in the letter which interested me. This event was reported to have taken place on New Year's Eve of 1969. The witness was a very close friend of the news columnist who told the tale after his friend's recent death [this situation is why the columnist felt that it would now be OK to tell his friend's confidential story]. The witness' name was Bill Evans. The columnist's name was Jack Scott.

There was a New Year's Eve party at the house on the shore [somewhere in the vicinity of Vancouver], and there had been a beach bonfire, but people had retreated inside. Evans and Scott had remained outside, Scott to attend to the bonfire, while Evans had wandered down the beach. His excuse was picking oysters, but it was a walk of solitude common to him. The blaze was quite robust just then, and it and the Moonlight illuminated quite a patch of the beach.

Evans had been gone oyster-picking for about twenty minutes, when Scott looked up and noticed his friend standing "transfixed". Ultimately noticing Scott staring, Evans slowly waved to him to come over. When Scott arrived, his friend seemed quietly introspective. Neither talked. They walked a bit further down the beach and sat. Evans, still staring out into the ocean bay then said: "I've just met a Mermaid".

Scott, of course, thought that this was a joke, but Evans sensing that waved any comment away. He continued: "She came into the shallow water at the point and then she came out of the water on the beach, where we get the clams.     She was very beautiful.     She had long golden hair.   Well, it was more like ribbons of kelp, but somehow beautiful. She had a long green fishlike tail that was a part of her exquisite body.   I just didn't know what to say to her."

Scott, stunned by these comments by a close friend that had never had any tendency to engage in foolishness of anything like this sort, noted the euphoric appearance of his face, and had to take him seriously. He asked him, well, what DID you say?

Evans gave a bemused self-deprecating smile and said: "Aren't you cold?" She gave a laugh and in a non-human-but-still-human low voice "like an offshore breeze", said that no, she wasn't. She asked him why the people had been gathering on the beach, and he talked a bit about New Year's and parties with friends. Evans thought that they talked for about five minutes.

Scott asked if he could describe her. Evans was a bit embarrassed. The Mermaid was topless and he felt that her great beauty and the very non-mundane interaction that they were having made his "looking at her" something that he didn't want to make so obvious that she thought him a crude lout. But he responded to Scott's question this way:

"There was nothing even remotely self-conscious about her, you understand, but since she wore no clothes I felt a little embarrassed about looking at her. Still, I saw enough to know that she was absolutely lovely. You could say breathtakingly beautiful. When I asked her, at one point, where she lived, she pointed out to the water and the path of the Moon. Then we saw someone coming down the beach and she took my hand for a second and slipped into the bay and was gone". At that Evans unconsciously lifted his hand towards the water. Scott saw that it was still wet.

They sat a while in silence. When Evans died he asked for his ashes to be scattered in this very bay. And this despite that he was never a sailor nor ever owned the smallest boat.

There's something about that one that makes music for me. 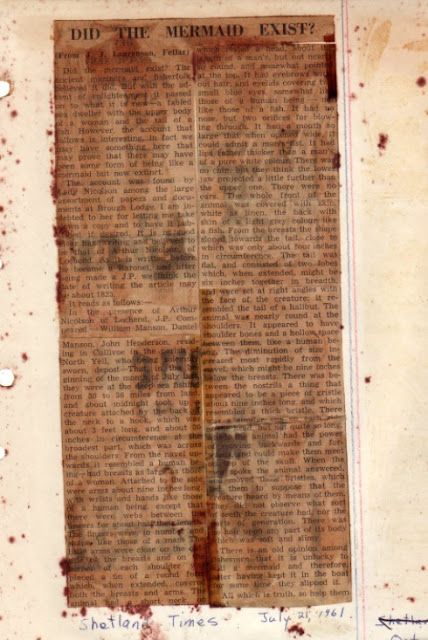 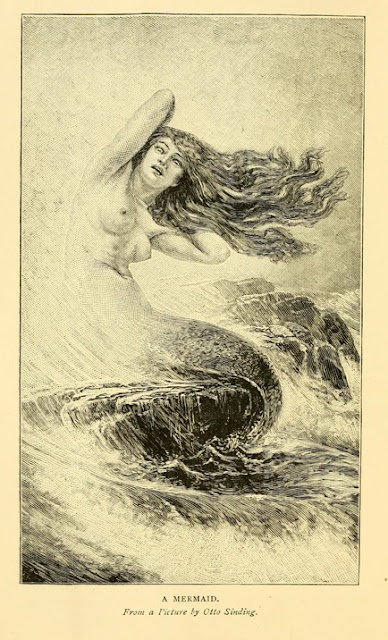 Ivan's three-ring notebook which contains some "mermaid" files surprised me that it existed at all. This is because Ivan didn't really like the paranormal, much preferring something he could get his hands on. And, as to "mermaids", Ivan was a biologist and knew that they were biologically impossible. Ivan didn't want Nessie to be a water kelpie, but rather a big old beast capable of entering the biotexts. He didn't want Bigfoot-from-Magonia, but rather a new Big Ape. And he didn't relate to half-human half-fish entities either. Maybe he thought that if he collected the information, there would be a relatively normal biology animal behind it all.

His Mermaid file consists of about ten newsclippings, several pages of an 1822 story from the London Mirror, Chapter 9 of Folklore and the Sea by Horace Beck, and a chapter out of an 1883 monograph from a fisheries publication, entitled "Sea Fables Explained". [by Henry Lee].

That latter reference had some quite good history of the mer-people concept from ancient times, and was illustrated with interesting line-drawings like the above. Up there are "Dagon/Oannes" the powerful fishman god of Mesopotamia, a coin/medal from the Phoenecian colonization of Marseilles supposed to be representing the goddess Atargatis, and a medal/ coin from Corinth representing a Triton male and female pair........ so the concept is certainly very ancient. 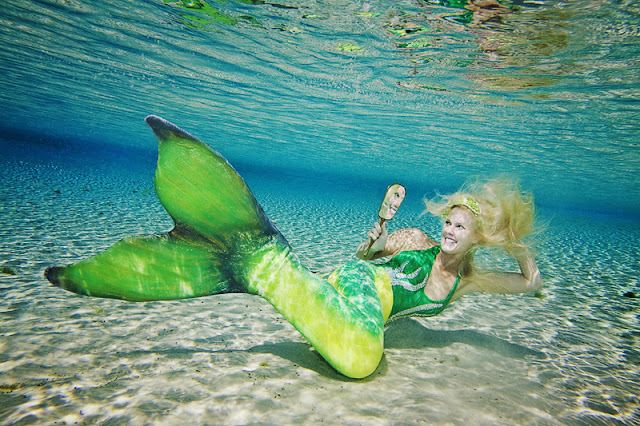 Pleasant as the subject is, I am going to resist making a review project out of it, and suggest instead that you buy Jerry Clark's UNEXPLAINED! and read his chapter on "Merbeings".

You'll be smart then.

And you'll be able to blame him rather than me for shocking your family with plans to move to Vancouver Strait or the Orkney Islands.

Till next time, peace, and a slightly belated Happy St. Pat's. If you don't have the Irish Magic in you, you should have.