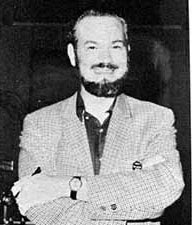 The Time Has Come The Walrus Said To Talk Of Many Things
Of Hacks, And Quacks, And Men-in-Blacks
And Weirdos On The Wing.

Late 1966: Colorado was trying to figure itself out with no success. Mothman, whatever THAT was, was terrorizing innocent West Virginians, and beginning to terrorize John Keel as well. Gray Barker and Jim Moseley just felt that it was all great fun. Don Keyhoe hated, essentially, everything about all of it.

Keel had made a foray into the Wilds of West Virginia and was nervous but fired up. His thinking was sliding noticeably towards interpreting UFOs in the darkest ways. And, yes, this will tie into Wanaque sooner or later.

Keel gave a talk in NYC introduced in embarrassingly glowing phraseology by Jim Moseley, which shows him on an intermediate trajectory to the Dark Side. He followed his own braggadocio about himself with an interpretation of the CIAs Robertson Panel report. As the Report was so loaded with blockbuster things to say, he didn't have to embellish it. It on its own terms set the tone of the sinister. "The FBI and The CIA had free authority since then to investigate anyone in UFOlogy they pleased". {Not a direct quote, but a direct accurate "delivery of the gist"}. He then alluded to an upsurge of UFO related kidnappings of citizens, which the authorities were ignoring.

He launched into Mothman. There were now over 100 reports of encounters with Mothman and more occurring each day [I think this to be a gross exaggeration but it is effective drama]. Many of these incidents involve the Mothman stalking people mostly in their cars. {He had said earlier that there are whole communities in America where people are afraid to go out at night because of UFO car stalkings.} And where is the Lair of this Beast? The West Virginia Ordnance Works, itself a sinister dangerous place.

Keel actually said in this talk that the military had left behind dozens of covered silos filled with high-explosive TNT. Now that statement [considering that the WVOW was entirely vacated of military security for more than a decade [almost two decades], is so preposterous that one wonders how any thinking person could utter it. Also, there was a "network of tunnels" underlying the whole complex.... what mysteries and dangers lurked there? { These "tunnels" were drainage sewers for two, yes dangerous, waste waters called "yellow and red water" which were contaminated "by-products" of the TNT making process --- my dad, who was "acid area supervisor", probably was the main culprit sending such wastes down these drains}. For Keel they were the possible home of the monster.

After himself terrorizing the audience with Mothman and the WVOW, Keel went on to say that many UFO incidents show hostility and that there are encounters where the entities attack people viciously. He then reflected upon Aime Michel's sane theory that all the occupants we see are robots, and spun that to give the impression that if these robots are confused in their tasks they might attack unthinkingly. Well, doubtless only the lady in the crowd who shouted Keel down insisting that Mothman was "An Angel" slept well that night. 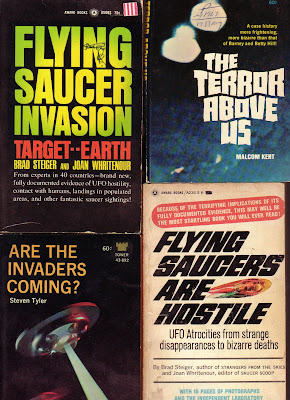 As Mothman and MIBs pushed Keel to the paranoid fringe, he found plenty of company over there. And Wanaque played its role. Stories were bubbling up all over the place about uniformed military arriving at witnesses' homes or work places and grilling them or confiscating evidence or worse. Enough of this was reported that the USAF DID take it seriously. A relatively polite USAF spokesperson, Colonel George Freeman, went somewhat out of his way to talk with several people who had given complaint, and had asked local base personnel to look into the various claims. Keel claimed to have talked to him personally. Keel quoted Freeman: " We haven't been able to find out anything about these men. By posing as Air Force officers and government agents they are committing a federal offense. We sure would like to catch one."

Keel himself then wrote: "Mysterious men dressed in Air Force uniforms or bearing impressive credentials from government agencies have been 'silencing' UFO witnesses, according to Colonel George P. Freeman, Pentagon spokesman for Project Bluebook". Then, "In the recent case at Wanaque reservoir, in New Jersey, Colonel Freeman told Keel, police officers and other witnesses allegedly were collected together by a man wearing an Air Force uniform. They were told that 'they hadn't seen anything' and that they shouldn't discuss the incident".

Colonel Freeman is then quoted as saying: "We checked with the local AFB and discovered that no one connected with the Air Force had visited Wanaque on the date in question. Whoever it was, he wasn't from the Air Force". Keel sort of credited himself with the stimulus that then inspired Freeman to send out a military memo for all commands to be on the lookout for this sort of charlatanry. For me, I don't see the silencer meeting at Wanaque. Did it even happen? Did Freeman even go up there? Who actually talked to him? This is very peculiar business to me. {I'm still trying to digest all the unravelled threads here folks; if I stumble over something that nails this silencer meeting down, I'll let you know}.

Keel himself was far from completing his trajectory. He communicated with Joan Whritenour on this, and she [who had begun a useful small newsletter called SAUCER SNOOP] was well into a transformation into utter paranoid land herself --- note two of the books above, written with fellow paranoid, Brad Steiger. Keel was tendering the hypothesis that these MIBs were part of some super-secret USA agency far darker than the FBI or the CIA. Their purpose?: To cover the fact that the whole UFO landscape was a terrestrial scheme, having nothing to do with extraterrestrials. Whritenour wouldn't go there. Her case studies told her that the MIBs, despite looking like us, WERE the ETs and they were bad guys. What all these people were agreeing upon was that the jolly old UFO encounters were part of something horribly threatening to mankind. 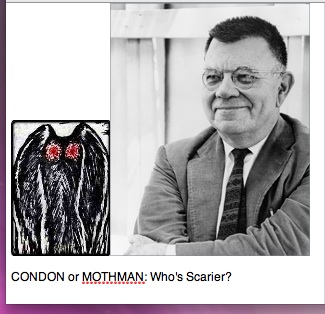 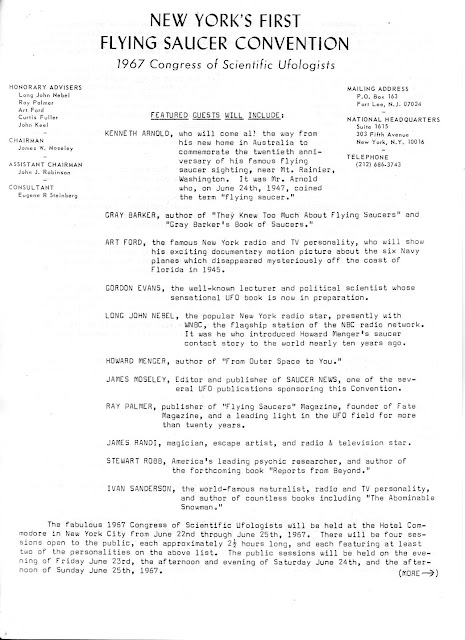 It was Jim Moseley's "big show". All the staff at Colorado begged Condon not to go. But jolly old Ed was having a ball sitting in his office at Colorado laughing at all the UFOs nuts he'd encountered --- he'd made a substantial "nut" file that he planned to put to good use later --- and this UFO convention looked like just the howlering hoot he'd enjoy. 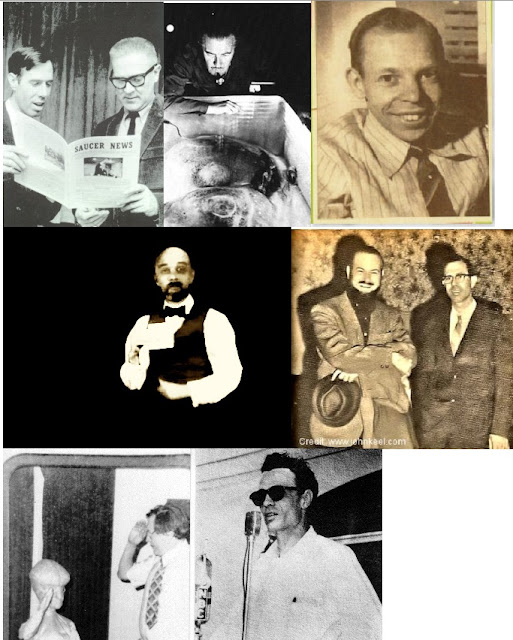 Condon may have initially gotten what he was looking for here, but as the convention wore on, he became a changed man. Who did it? There were certainly plenty of candidates. Even our beloved Ivan Sanderson was far off his normal game and gave an embarrassing talk. Menger with his girlfriend from Saturn and his piano music from Neptune or Uranus surely impressed. Barker laid out the whacky Al Bender-like rendition of the MIBs. But I'm betting it was Keel.

John wasn't even on the schedule as you can read... but he talked {I have had the pleasure of listening to the recording}. Here's what he said: He began amazingly by quoting a very smart but very young friend of mine [who may not want to own up to these "errors of youth"] by saying that " XXXXX XXXXX says that it may be that we are in for a wave of silencings". {This is actually very flattering to a young man of, what, 22? that his name could be used to validate a radical talk about MIBs.} Keel continued on with Mothman statements, news of a Pennsylvania flap with blackouts of the UFOlogists' phone center. He alluded also to East Coast energy grid black-outs obviously teasing the audience with the possibility that these too were MIB mischief.

Then he begins to really lose it. He spoke of arsons being deliberately aimed at witnesses ... and prowlers about their homes ... and giants ... uh, WHAT! Giants hooded like dark monks ... oh well, yep, lots of cases of that... no problem, John. Then came animal thefts, burnt animals, mysterious abandoned cars and missing persons... he rose to theatric pitch: "This is a Nightmare on the Ground that  has been completely unpublicized!" 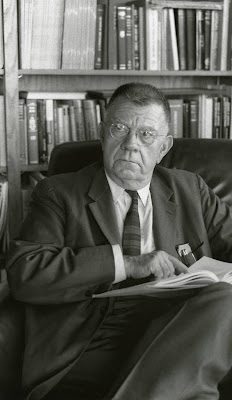 The doctor was doubtless NOT amused.

On plunged Keel: Police radio systems were knocked out; strange voices came over their receivers. Other strange voices would come over phonelines or ham radio receivers. Poltergeist activities would flare up in witnesses' houses, sounds of babies crying or abominable snowmen-like creatures would be heard. Many teenage boys have gone missing, and mysterious automobiles, three times the size of normal cars have been seen lurking.  "Something very bad and very serious is in the works!".

Condon listened to all this. John Keel was obviously an intelligent and very articulate man, who had been a productive New York writer ... but this....

Ed Condon returned to the project at the University of Colorado a changed man. Gone was the hilarious jokester regarding his position in the project as a benign [generally] absentee administrator who was happy to sit back while Bob Low and the others did all the work. He didn't think UFOs were a joke anymore. He thought that they were dangerous.

BUT, in an exact opposite way to the way Keel thought they were dangerous. UFOs were dangerous because they damaged your mind and made you a dangerous hysteric and rabble-rousing mental case. That is at least Condon's deduction. He followed his return by immediately letting people know that they shouldn't cooperate with any requests for information from grade school kids or their teachers. He specifically called some educator "out-of-your-mind" for recommending materials which can easily damage the minds of schoolchildren. He was furious about this.

We can never know if it was Keel's talk or more of the general impact of the whole convention, but the rest of that convention seemed merely in the stupid category. Keel, with his kidnappings, disappearances, stalkings, ghosts, and overall a violent, threatening tale out of a Stephen King novel, was on the edge of mental unbalance if not far beyond in Condon's Universe.

So, Mothman's a LOT scarier than Condon, because The Mothman Guy {Keel} scared Condon.

And in doing so, made the UFO Study at Colorado that much harder on everyone. Now they too had their own in-house paranoid. 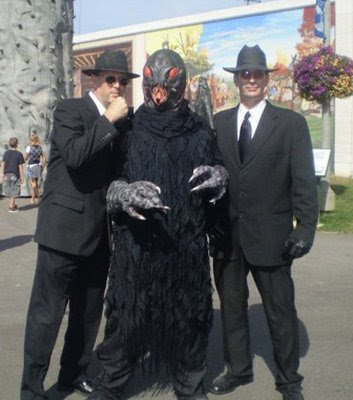 Yeh. HaHa and all that.

Not really... not for UFOlogy.

Keel ended up writing "An Open Letter To all UFO Researchers" which was widely published. In it, he emphasized the Hostility in all this. He stated that threatening children was one of the commonest practices. He stated that witnesses are further threatened by near-collisions in autos and gas lines left on in their homes. Kidnapped persons are subjected to "sinister brainwashing techniques". And beatings. Even murders are committed, and framings for murder. A great number of these contactee witnesses are participants in genetic experiments {this was 1967; Budd Hopkins was c. 1985 on this claim}. "The Men In Black are professional terrorists and among their many duties is the harassment of the UFO researchers who become involved in cases which might reveal too much of the truth".

Wanaque played its little role in this, having its own mild MIB alleged claim just as Keel was beginning to gain momentum on this wild ride. I doubt that any of the many cops at Wanaque would have believed a word of any of this, including that the keep-silent meeting even happened --- they certainly didn't keep silent themselves. 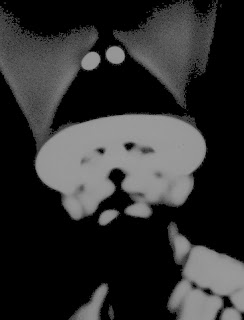 I'll get back to dead-on focus on the last bits of the Wanaque tale next time... in an unexpected way, Allen Hynek, Ivan Sanderson, and a very Keelian claim will be involved. But before that, Lloyd Mallan will restore sanity.

Posted by The Professor at 6:14 PM