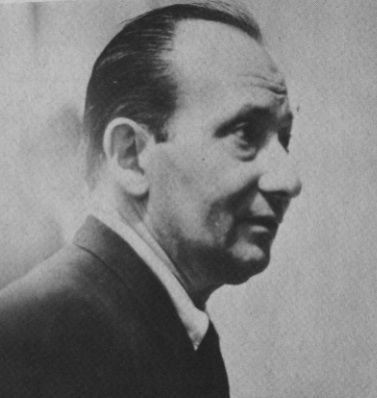 Wanaque had almost as many questions associated with it as it had answers, and it badly needed a sober overview by a decent thinker. We got pretty much what we needed with Lloyd Mallan. Mallan was a good science and engineering writer and a bright guy. He had also seen a UFO of his own, and was thereby sympathetic. As an associate editor of a popular magazine, Science & Mechanics, he was able to do something that almost no other writer could do: leverage UFO articles into a non-UFO journal. He wrote several, and they were all sane to my reading, and the UFO community owes him some thanks for that. So, in 1967, he took on Wanaque in a three part series in the magazine. 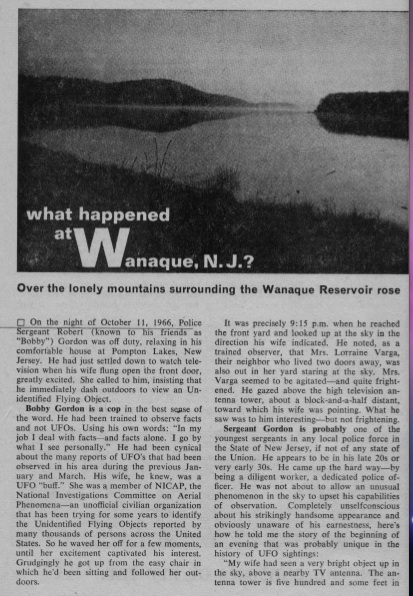 In part one of Mallan's presentation, he relies heavily upon Officer Bobby Gordon and Officer Ben Thompson of the October 11th incident. And these are the best two choices. They are the most significant witnesses along with Gordon's wife, and they are willing to talk at length.

Gordon gives the front end of the case. His information is consistent with what we've heard about his wife and their neighbor and himself seeing the very bright light which seemed small to them moving towards the reservoir. He describes the light with an interesting new phrase: it was very bright but sort of a "mellow" bright, and "just like a hole punched in the sky". Gordon also said that his officer buddies were not talking much about this, but it was nothing conspiratorial. It was just that they had been taking a lot of crap from people constantly ribbing them and were fed up to their eyeballs with it.

Thompson gives the meat of the case. His information is also consistent with what we've heard from him. Here is the very bright light again, but this time seeming much larger to the nearer observer [as big as an automobile]. Here is also the globe of light with half a football protruding, and the bright light globe rotating around it. He guessed the globe at eight feet in diameter.

Thompson really emphasized something in this interview: right-angled turns. He said that the object made this sort of maneuver many times in short swift motions --- so sharp that you couldn't see any rounding of the corners at all. Suddenly the thing was just going in the different direction. Then he said this: "It seemed like it was putting on a show." Uh oh. We've seen this time and time again now. "UFOs" making what seems to be an on-stage display, maybe for just one witness.

Thompson said that the light of the object was peculiar. Seemingly very bright, but no sense of a normal beam. He could see fine if he looked at or nearby the light, but if he looked away from it he couldn't see anything. Peculiar indeed. Shortly after he had switched on the top beacon of his patrol car, the object began to leave [it had been mostly hovering or drawing geometry in the sky]. A slight mist formed around it as it left. It moved towards the mountains and just went out. At that time, his visual system [which had become somehow mysteriously dependent upon that particular light] went blind. Thompson could see nothing at all for about two minutes and was forced to just stand there until vision slowly returned.

One other oddity: the object seemed to effect the physical things beneath it. As it cruised away across the water, the water rose in a large swell, settling back as it passed. When it got to the mountain, the tops of trees seemed to bend together when directly underneath. Both phenomena are the results of "attraction" or vortex suction of some kind. Thompson said that he had seen similar lights [both much higher] on two other occasions, once just the previous evening. In all three cases, he claimed that the object drew right-angled geometry as it moved in the sky.

As to "intimidation of witnesses" : Thompson claimed that "the government" had sent "an investigator" to speak to the officers at the local high school in January of 1967 after the big sightings then. This man pooh-poohed all the observations debunking them. But that's all he did. There was no "don't talk about this". 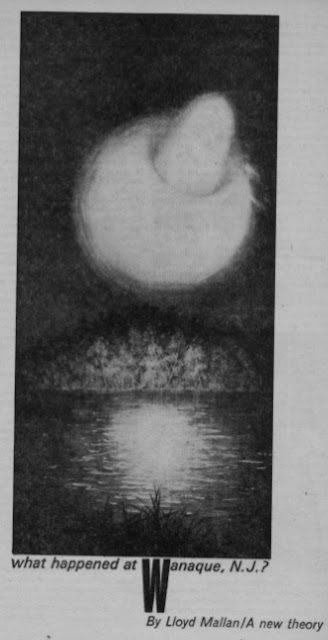 So, we're possibly getting better clarity here. Part two added more of interest while part three did less [for me anyway; maybe it was Klass in part three]. Part two is based around information from a college student doing geiger counter readings, plus the case of newspaper editor Howard Ball.

The student's story is interesting but may in the end be nothing. He and a friend used to do things like take surveys with geiger counters in various places, apparently out of curiosity inspired by the presence of a big nuclear power plant just to the north. Out on the 11th, though earlier than the Gordon-Thompson sightings, they picked up a significant radiation excursion near the reservoir to the north at Ringwood. This was four times normal background. They returned to the site the next day and the readings were back at background. They naturally wondered.

Mallan wondered too. Knowing something about such technology, he thought that the powerplant could be the culprit. Naturally the officials both denied that they had any sort of leak, but described in great detail how such things are prevented. [Nuclear fission processes can release heavy noble gases like xenon as a by-product, for instance, and it is not unknown to have a gas leak. Such a whiff of radioactive "wind" might have passed by the geiger counter. The plant officials explained how that did not happen]. So, what did? The reactor managers did not know, of course, but they guessed "rocks". The mountains surrounding the reservoir were full of igneous rocks containing thorium. These stones therefore were busily containing a production of radon gas and releasing it. Sometimes the radon happened to get unusually concentrated as it diffused its way into the environment [this is the same reason you don't build your air-tight basement with granite], and you get an excursion. They said that once there had been a radon release and concentration so oddly big that it set off the plant's own failsafe systems and the reactor was shut off. Well, maybe that is what happened.

Mallan also spent a real effort trying to track down the helicopters which Thompson said arrived soon after the object disappeared:  No luck. He then tried to find out where the "investigator" from the government came from in January: also no luck; every base said absolutely they did not send anyone down to Wanaque on the date in question. Mallan determined that whatever this meeting was, only a few people attended, as the Mayor, for instance, knew nothing about it and he himself was a witness. Also, it could not have been the big NICAP meeting that Don Berliner chaired, because Don was very positive about the main sightings being UFOs [and the Mayor and practically the whole town attended]. The mysterious meeting with Keel's MIB candidate was getting smaller but no less mysterious.

The last really good part of the Mallan part-number-two work involved his talks with the initial on-record person seeing the January UFO, newsman Howard Ball. Ball was the only "case" making it into Blue Book at all, and that only because he rather insisted, both initiating direct contact and requesting the form. Ball said something about his sighting which hadn't been emphasized previously. He too spoke of the very bright light which affected your eyes [though not in Thompson's detail] AND spoke of the remarkable right-angled turns that the thing made. He said that when the thing decided to move towards the reservoir it did so quickly, but in this peculiar way: a quick straight line SSE to NNW, then an instant right angle shift to SSW, then another instant right angle shift to a NNW path parallel to its original direction.

Ball himself was responsible for one of the USAFs screwy theories. He, as a newsman, inquired directly to the local air base [Stewart]. He asked them whether they had anything flying at the reservoir [denied]. He said that the only thing that it even vaguely looked like it might be was some unusual helicopter with an unusual strobelight beam. They said that they had no such thing. He called back the following day, and they told him that they'd solved the mystery. It was a helicopter with a strobelight beam. Ball said: really? Why do you say that? They informed him that an authoritative source, a newsman named Howard Ball, had seen it. By this time they had in fact released this solution to the wire services. Ball, of course, was amused and stunned at the same time. One day later, the base was denying that they ever said any such thing.

Ball also debunked the hole-in-the-ice business again, as he had talked with all the officers. 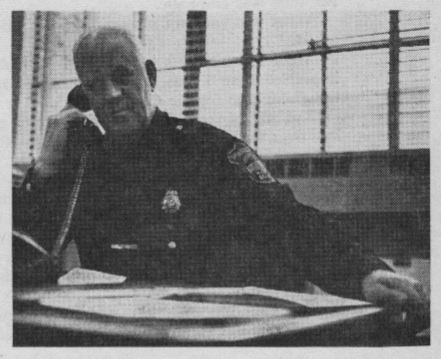 Mallan's part three is less loaded with interest that the other two, but still contains good stuff. The Mayor had become jaundiced on this whole affair and spoke of his own sighting in terms so minimalist that you know he was just putting all this in the rearview mirror. He wouldn't describe his son's part of it at all. Mallan had better luck with Officer Bill Pastor, who after giving him a hard time, sat down and talked of what he'd seen with great seriousness --- almost intimidatingly, which seemed to Mallan to be the product of all the mockery these guys had taken. Pastor said that the object looked egg-shaped to him [a more distant look at a globe with a fat football protruding could seem so]. It was rotating and cycling different colors [he remembers the sequence as "amber--- red--- green--- blue"]. The surface of the thing seemed a dull aluminum finish [he said anodized]. Pastor, unlike most, watched the thing largely with binoculars. It would dash very fast, then come to an immediate stop. While in motion it would, many times execute right angle turns. Then he said this:

"It Was A Geometrical Performance."

Chief John Casazza added something also which had not been said. He said that when he was watching the light hanging over the reservoir ice, the light from the object drew a sharp line on the ice just like an artist had drawn it on there. That is, there was no spread nor fuzz to the "glare" of the line; just a mystifyingly stripe of light. He also said that although the thing was very bright, you could look directly at it for a while, and when he did, the light seemed to emerge as if out of a funnel. There seemed to be a three dimensional funnel-shaped corridor "in" something from which this light came. [perhaps an invisible part of a larger object, perhaps...?]

Mallan finished his tripartite saga with talking to Phil Klass about ball-lightning, wherein Klass said that ball lightning could explain the whole thing. Yep... a light which hovers over the dam for two hours in January ... yep ball-lightning all right. And one as big as an automobile which could glaringly light up the whole southern end of the reservoir in October... typical ball lightning behavior. 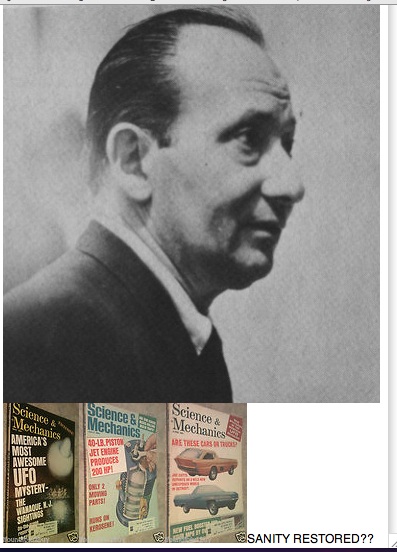 Did Lloyd Mallan restore sanity? I think that he did as well as he could. So, Lloyd, Applause. Good try. 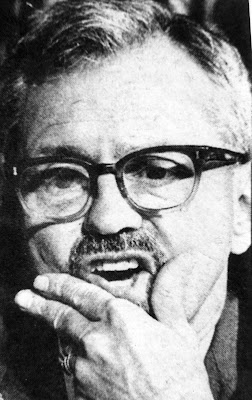 I think that I'll stop here. Next time our hero, Allen Hynek, gets briefly involved, and in an unlikely turn of events turns our other hero, Ivan Sanderson, loose on the mystery.

Till then, folks, Peace.

Posted by The Professor at 3:09 PM