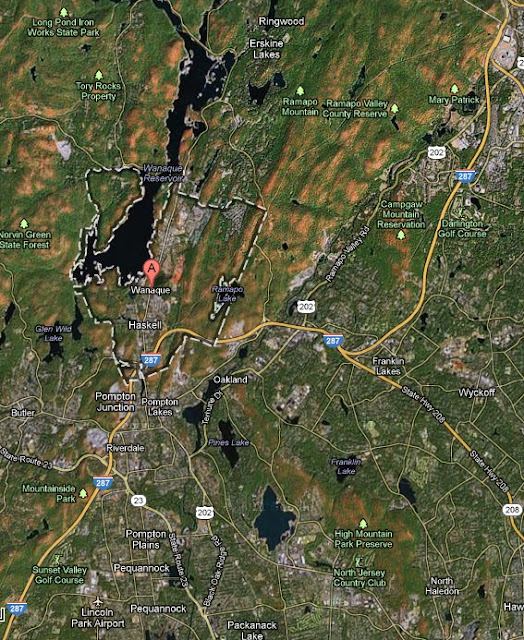 Across the spring and summer of 1966, nothing in particular happened at Wanaque, but something seemed to be happening to UFOlogy. Whether it was the phenomenon itself which got stranger or "just" the minds of some of the people pursuing it, there was a windshift. "Keyhoe-ian" style UFOlogy seemed in retreat, while high-strangeness thinking was creeping about [in almost every sense of the word "creeping"]. This was all in spite of the famous Hynek "Swamp Gas" gaff in March, the Gerald Ford blow-up at the Air Force, the somewhat humbler tone of the military, and the secretly manipulated TV documentary by Walter Cronkite. That documentary, molded into a masterful debunking production by Robertson Panelist Thornton Page, was "The Empire's" way of striking back at UFOlogy's newfound support. Somehow, in the midst of things which might have produced a moderate mildly positive atmosphere for UFO research, elements of the field began to go a bit "Keelian" shall we say. Interest was dividing between the persons who were hoping for a more-or-less "scientific" approach, and a whole wave of people heading rapidly Out Proctor. During the summer, people knew that something like Colorado was coming. The Keyhoe's, Hall's, McDonald's, Hynek's of the world quietly cheered. The Keel's and Barker's of the world thought: who cares?

Into this schizophrenia Wanaque manifested again. And, for the most part, no one cared. 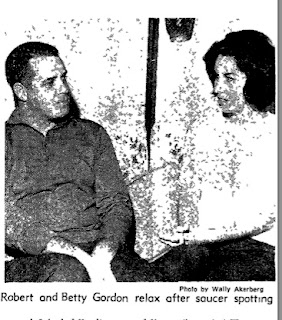 Wanaque, October-style is essentially one well-known instance. It turns out that other things went on, but it was one particular report which was covered by the papers and got the hullaballoo going again.

OCTOBER 10th, 1966: c.10pm.  Betty Gordon was at home with her husband, Robert, a reservoir policeman off duty, and a visiting neighbor. She spotted a very bright discoidal light like a "saucer", and all three watched it. They called the on-duty police, and an officer responded also seeing the thing. He then radio'd officer Ben Thompson who was out in the field. Thompson's position is difficult to surmise due to our, as usual, geographically-lousy field research, but may have been somewhat at the south end of the usual sightings of January.

Thompson sees the thing as an extremely brilliant blinding lightform. He radios back to base that the object "is lighting up practically the whole southern end of the reservoir". Officers Pastor and Webster then go out to look and they see it too. Thompson has much the closer position and should be considered the primary witness, although as we can see, there are many witnesses. The newspapers reported that when Thompson turned on the light on top of his patrol car, the object's light went out. I do not believe that this was accurate. Pastor and Webster continued to observe the bright object as it flew a leisurely course up the reservoir to the north and beyond towards New York state line. This doesn't seem to have been true either, and the newspapers were having a bad day. We will come back to what may really have happened here, as, wonders of wonders, we have an actual field report interview of Thompson. But, for now, lets complete "the news". Shortly after the event, helicopters of an undetermined source showed up. The relevance of this is your guess. Newspapers swooped in for interviews and television got Thompson and his fellow officer, Gordon, to do an interview program on what happened. [ I have no information on what was said on that show other than what's been written above and a couple of other thoughts --- Thompson said that the light was the third one he'd seen since last winter, and Gordon said that this sort of thing was 'old hat' on the reservoir. Whereas the initial news story had said that it was automobile-sized, Gordon said more like a grapefruit. {as we know, and will hear later, this shows how tough it is to estimate size if the object isn't REALLY close and/or on the ground}.There were brilliant flashes at one point like giant flashbulbs. Both officers said that six helicopters which showed up seemed to them to be looking for the object.]

Augie Roberts again did his thing, showing up with a photo [the infamous one with a fuzzy domed disk radiating a spreading lightbeam downward] and alluded that this was the Wanaque object. People bought it, and the story was printed. It is good to remind oneself that the original source for the "beam" story was a misquoted engineer, Fred Stein, who clearly debunked the misquote. Such matters would of course make little difference to Roberts.

On the 15th of October, an unknown case occurred. It was only reported later to Berthold Schwarz. We'll get to it later in part four. On the 16th another unreported case occurred which was witnessed by three adults in Pompton Lakes, looking towards the reservoir. Very unusually for Wanaque, this was described as a metallic disk, rounded top but flat bottom and quite shiny. The next words are difficult to interpret precisely, but the witnesses seem to be saying that the disk had a light beacon on the top, and when the light came on, the disk disappeared. The light was then seen flying off to the north.

The renewal of action at Wanaque was enough to generate crowds again, though apparently not so badly as in January. As time went by, other sightings sprinkled all across northern New Jersey in a sort of miniflap. During this flap, persons were getting phonecalls and visits from UFO investigators [of unknown affiliation, if any] and some of these visits irritated witnesses enough so that they were reported. For people like John Keel, this was evidence of a great wave of Men-in-Black sweeping up UFO evidence and generally causing trouble. Keel would phrase this concept in the most sinister of terms. And he would refer to Wanaque and the New Jersey flap as evidence for this which he knew about personally. 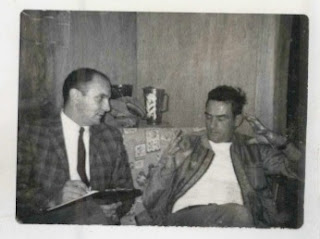 NICAP does something [mainly] right:

Although no flurry of personnel showed up, we can give honest thanks to Dr. John Pagano for doing so and going directly to Officer Thompson for an interview [transcribed and available]. Three cheers for Dr. Pagano.

Pagano got over there quickly. The interview with Thompson was on the 12th; outstandingly fresh. A newsman was also present as a third party [well-behaved; asked no questions]. So, here's the detail:

2]. Thompson was aware of several witnesses to what he saw [from varying distances];

3]. He parked his patrol car and got out when he saw a very bright light in the sky. He was on a potentially trafficked road, so he put his signal lights on, and watched the thing going slowly left to right mainly for about 3-4 minutes;

4]. Occasionally the thing would engage in short rapid violent maneuvers. It might "shoot straight up with a square curve" [i.e. to his eye a right-angle turn], and then dive straight down, make rapid left/right zigzags all throughout this time. {My comment now: for those who think that this might have been a student prank "laundry-bag" style hoax, note the next comment}. The BOL was so bright that it lit up the whole area of about 400 yards square. When the light suddenly went out, Thompson's eyes were so affected by the brightness that he temporarily could not adjust to the immediate darkness, and he could not see his car, even though it had its top dome light on. { student hoaxers would be playing with some mighty powerful light sources here. The old candles-in-the-translucent-bag bit doesn't quite cut it, does it?}.

5]. Apparently Officer Gordon, though off-duty, had a curiosity attack, and drove out to join Thompson. They stood around looking and talking for another hour, but it did not return; 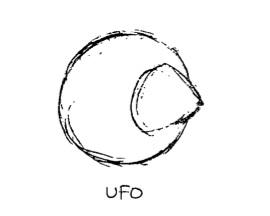 6]. What Thompson was looking at, to him, seemed pretty globular but still with some form to it. He described it as a basketball into which was inserted a football halfway. His nearest view of the thing was about 150 feet away and about the same distance high. [my guess is that he is overestimating the angle here as most witnesses do, as other parts of his statement would make it lower --- here is where we needed Walt Webb for precise angles and mapping];

7]. Thompson estimated the size as about that of a car;

8]. He felt that the only trait that it had other than its brightness and erratic motion was a slight mist that it left close behind as it moved;

9]. He verified that within 15-20 minutes of the thing disappearing, six helicopters arrived and around thirty planes crossed the area;

10]. After making a right angle turn, it drifted slowly left towards the mountains, and "right near the mountain somewhere it disappeared";

11]. The police went up to that area of the mountains the next morning to look for a possible landing site but nothing was found;

12]. He believed that the one that he and many others saw in January, though much smaller in relative appearance, also had a similar shape, though more difficult to tell;

13]. He commented on another incident where he had seen two BOLs, one red, one white, which seemed almost to be playing with or chasing one another in the sky. One would approach; the other would zip away in a straight lin, then make a right-angle turn and stop dead and wait. Several times the red one would close, and the white one would do something like that;

14]. Thompson mentioned that "government officials from Ohio" had come and questioned him {so apparently Wright-Patterson showed up, afterall};

15]. When the October 10th object would make wild maneuvers, or shoot straight upwards, it showed a lot more light intensity than when it was slowly cruising at level; it would markedly glare and flicker; 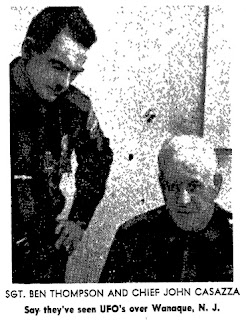 Sergeant Thompson concluded with this: " Whatever they tell me it was, I think if they were there, they'd have to admit it was something they'd probably never seen before theirself".  {Yep, my good man, I'm with you on that}. Ben Thompson and all his police officers buddies who had seen the BOLs in January and October and other times unmentioned, were always solidly backed up by their chief, John Casazza.

Not really surprising, as Chief Casazza had seen the things himself in 1965.

We can only wish that Dale Spaur had received such solid support after his spectacular sighting in the famous "Portage County, Ohio Police Car Chase" case, which happened in April of this same year, and helped ruin his life. Once again the Air Force played their inhumane role, insisting that officers Spaur, Neff, Huston, and others had seen a satellite and Venus.

I'll get back to Wanaque with part four. There is still more to tell, including Ivan Sanderson's role.

Posted by The Professor at 9:02 AM