WANAQUE, Part Eight {The End? We can only hope...} 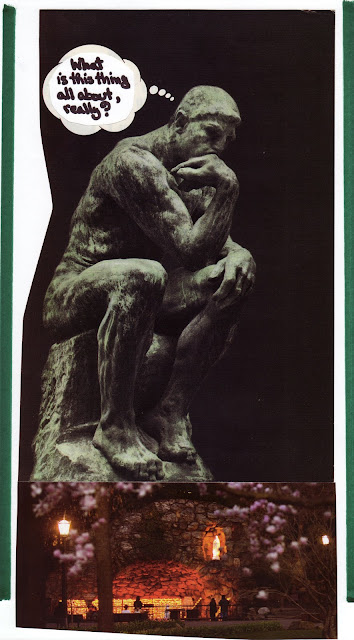 Well, I can't answer The Thinker's question, but that has rarely deterred anyone with a PhD from spewing forth unconcernedly, so here goes:

One: there's a robust phenomenon of "something" in the sky, which has manifested at Wanaque over decades. Whether it's still going on I don't know. And whatever this phenomenon is, it's not hoaxes, kids with laundry balloons, weather balloons, planes, helicopters, Menzelian star and planet misidentifications and atmospheric bogglements et al. It's one of our favorite things: an anomalous mystery.

Two: this "phenomenon" COULD be "phenomena". Some of the best observations seem to be "only" strange lightforms, but some rather good observations seem to be non-self-luminous objects. Whether one phenomenon [lightforms] is the product of the other [objects] is a unifying possibility, but this is a case where my usual Occam's Razor might be set on the shelf. I can just imagine here one oddity "attracting" another.

Three: the lightforms phenomenon seems "connected" to the geography of the reservoir area, and possibly even to the geology of it. Chief Casazza said that the great majority of instances occurred over the western mountains or at the southern end of the reservoir. If true, this aspect of the anomaly could be site-specific in the sense that it might point to a "natural" or at least a "terrestrial" phenomenon.

Four: the BOL incidents have a small number of unusual qualities. They are small and extremely bright, FAR brighter than one expects any object so small to be. The BOLs move in similar ways: usually hovering or in slow meanders, they often take active episodes of eye-confusingly quick darts and dashes, and do so in apparent non-inertial angle-defying motions. These motions have been described by more than one person as geometric displays.

Five: the BOLs sometimes just fly away, but sometimes seem to simply disappear as if suddenly switched off or extinguishing.

One: The light from these BOLs/objects might have special properties. The power of the illumination seems great, but the light does not always quite affect things as expected. Despite the brightness, it seems possible to look directly at this "mellow" light for longer than you'd think, and the light doesn't quite seem proper in its illumination. In fact, in the intense Officer Thompson case, the light illuminated some things sort of "in its direction" but not things if Thompson turned away from it. Thompson's own eyes seemed to become weirdly dependent upon just this light, for he could not see anything even close up when he turned away, nor later when the light itself turned off. It was as if this light was "for him" in some bizarre way, and his optical pathways were dominated by it during the experience, only returning slowly to normal function once the object and its light "went out".

Two: The light from these whatevers might be light generated by something rather than simply a self-transmitting entity. The light was described as a "hole punched in the sky", and as emerging from a funnel-like corridor [from where?]. The emerging weird light was also described as being a solid hard-lined streak of light "drawn" on the ice of the lake. All this seems to be "Light Behaving Badly".

Three: Occasionally objects appear which seem to belong clearly in the UFO class of flying objects. These things are described as automobile-sized, not self-luminous, sometimes associated with satellite or some other lightform.

Four: At least two pretty good "stalker" cases have been reported. Both cases had larger-than-usually-reported lighted objects following automobiles in secluded areas for long distances. "Stalkers" have usually been seen as experiences indicating "intent", and are always felt that way by the person being "stalked". Intention of course is synonymous with intelligent direction, and not natural coincidence nor "accident".

Five: There MIGHT be a few CE2 type cases [electrical or physiological effects], but we can demure on that [other than the peculiar effects on Thompson's vision].

One: The known elements of the Air Force were utterly uncaring about the 1966 events. This was probably true because they were in Quit Mode. Other more secretive elements of the intelligence/security community may NOT have been uncaring. As we have seen, a separate long-established reporting method for potential threats to the NYC water supply system had been in place for  decades. This could have still been "current" in 1966 and explain arrivals of helicopters, planes, and even an on-ground-intel agent or two.

Two: The UFO community basically stunk this up. The only positives in the story are bits of NICAP, Goodavage, Sanderson, and most of Mallan. And this is the point. The situation at Wanaque was complicated and long-term, and no one came anywhere near putting the story together. It's telling to me that I couldn't find a single Map in the reference material charting out a case. We today, to my reading, are not even sure if that big January display had an early "trip" coming down from the north [as FATE said] or whether it just started with Ball's sighting south of the dam. Pretty darned embarrassing.

Three: Elements of the UFO community were CLEAR detriments to understanding the story. Augie Roberts interjected photos, one of which was not his own, though he didn't make that clear at first, and one of which was not a Wanaque photo though he didn't make that clear either. Further he appears to have projected the fact that Officer Theodora's smudgy photos [which do appear to have been taken by some official] were maybe the bogus disk-and-beam photos not taken at Wanaque at all. Lots of fuzz and allusion by Roberts, none of which was headed towards truth. And then there's Keel with his involving Wanaque with sinister Men-in-Black, who seem not to have been involved in any way other than a small meeting between some agent and the police officers with some suggestion to keep quiet about their sightings [which they ignored]. Moseley as usual added nothing but fog and cheap shots at NICAP. One can imagine the level of seriousness in the minds of the police witnesses deteriorating with these guys around.

Four: Thanks largely to Keel, an atmosphere was woven about Wanaque in the minds of certain hysterical followers of Keelian thought, that we could get a "prominent person" visiting Wanaque and reporting that it was a town full of military policemen and Zombies. ... Laugh or you'll cry.

THEORETICALLY: What have we got??

When we reach into our "explanations box", some of us are reaching into a fairly small container of options. Of course, that's not our problem on this blog. Here we can somewhat sanely and civilly look not only towards mundane things, but also extraterrestrial things, Magonian things, psychic things, spiritual things, and weird sciencey stuff which we haven't "discovered" yet. {I'm probably missing a category or two}. What's Wanaque look like?

If it was just the BOLs and if they really began with the dam, then this would smell like some Earthlight phenomenon catalyzed by the damming up of a larger than previous mass of water, which in turn applied non-normal stress on the geology under and around nearby, and Voila!, Earthlights {Whatever THEY are}. Is Wanaque our Eastern seaboard's version of Hessdalen, Yakima, Brown Mt., et al? That hypothesis would be simply convenient if the whole of Wanaque would be more simply convenient.

But it's not, as we have seen. And, even for the part about the BOLs, that January case with its TWO HOURS of duration, really stresses the typical Persinger geomagnetically-produced plasma ball theory.

The good UFO cases look to me not at all like nature-produced lightball phenomena, but like good ol' UFOs. MAYBE they could be nudged over to become some faerie lightform types of things, but simple plasmaballs, no. And that peculiar light.... it "feels" like it's being produced by something which we cannot normally see; maybe something which is sort-of there in space, and sort-of not... maybe like something with a "window". Sometimes it feels like whatever this is is moving on some unseen grid, or something which is determined by a relationship between our space's force characteristics and something about its own physics or construction. .... the geometry in the sky.

There is just enough "display" in these things to make them feel deliberate. That throws me towards intelligence, and I can get intelligence into this only via something like ET doing its famous covert/overt displays, or nature spirits playing their games. Should I go for Tau Ceti or Magonia?

The easy way out is to cobble together a multivariable theory --- always a dangerous move {too much to play with to allow one to explain anything}. But, darn it, this DOES seem to me to be more than one thing. I actually like the Earth-generated BOL hypothesis as a base theory. I'd like it less if I found out that it never happens anymore. But overlain on this region of repeating earthlights, there seem to be good ol' UFOs.

Is such an overlay unreasonable? I don't think so. UFOs are a phenomenon which likes to display {for whatever reasons "they" desire to do so}. "They" seem to want to get some sorts of response, yet stay fairly covert. Wanaque seems a very good place to do that to me. One could hide your "tree" in the "forest" of BOLs, while worrying the central nervous systems of isolated witnesses to your heart's content.

Not a testable hypothesis... no control over the alleged "agents/causes" and you could get the same effects by having the Tricksters of the Pre-Columbian Native Americans sub in for ET, just as Vallee did. The UFOs here don't have the thumpingly obvious nuts-and-bolts which tosses them towards ET, but are far more technologically vague.

But he left us hanging, and that's as far as I'll go. Wanaque's a genuine mystery, and in the broadest sense, at least, a UFO one. It may be a candidate for a Hessdalen-like automated observation post. Maybe we'd find out a little more. 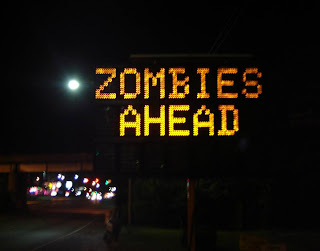 I'll go out on one last limb: there are no zombies in Wanaque.

Yes, it definitely is.