Ready or Not, Here We Come: off-course Irishmen in West Virginia? (part one). 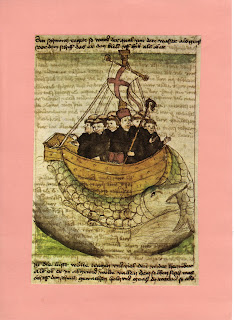 There's an old legend that an Irish Monk named Brendan had the strange thought that he should sail West into the Atlantic to find "The Fortunate Isles" and bring the Gospel to whomever he encountered along the way. The idea has, of course, been regarded as nonsense for a very long period of time [and for some good reasons], but there are a few "anomalies" in West Virginia which make that old story seem a little less impossible. Since I travel right past one of them when I go back to the family center on vacations, it seemed like a worthwhile story to tell. So, here goes. 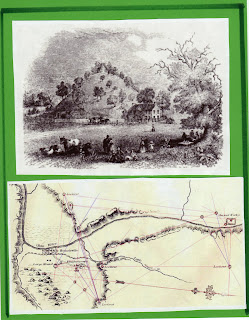 The first "item" in question is the Grave Creek Mound in the heart of Moundsville, West Virginia, about 20+ miles from my family home. There is only one mound structure larger in the USA [Kahokia, IL] and that one is a "stepped" object. The Moundsville mound is the largest conical mound in the country. It was therefore hard to miss, and we European guys "discovered" it as soon as we set foot in the Ohio River region. [An early drawing is at the left]. All the earliest explorers [Squier and Davis, Schoolcraft, et al] marveled at the thing and wondered who had built it and what it "meant". Such structures occurred all up and down the river and [thank GOD] were mapped rather well by these early archaeologists. Most are now destroyed. The Native Americans at the time couldn't help much with answers, as the mounds seemed just as big a mystery [or at least a lost story] to them. Thus began the mythology of an ancient "race" of Moundbuilders, who had a "high" society reminiscent of the great southern empires of the Aztec and Maya. From those early days, and even somewhat in the present, the archaeological community has struggled to explain the Mystery of the Mounds. Today, we know a great deal about this era, but certain things remain elusive. 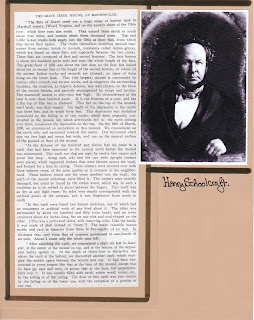 Of course, back in the early 1800's anything could seem possible. The original "owner" of the Grave Creek property was Joseph Tomlinson. He refused to allow any desecration of the mound, which he regarded as having a culturally spiritual aspect about it. Joseph died in 1826 and his son, Jesse, felt the same way. By 1838, however, the social pressure to dig the great mound for its treasures was too much, and Jesse's nephew, Abelard, was permitted to open the structure. A report on this amateur excavation was published in 1839 by a Dr. Clemens, who, it appears got some details wrong, and in 1842 by Abelard Tomlinson. This interested the great early Native American student, Henry Schoolcraft, who visited the site and published a better [almost certainly more accurate] description of what went on and was found, in 1846. For those who would like to read Schoolcraft's very words, they are illustrated in two "pages" on the left. The mound turned out to be a double mound. one structure built on top another, and containing burials and objects such as shell beads and copper ringlets. 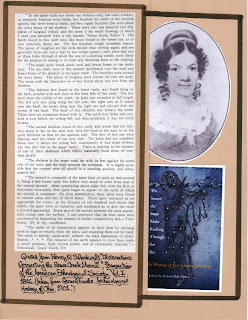 The objects found are of some consciousness-raising significance as they indicate that these people were engaging in a wide-ranging trade system, stretching from the ocean [perhaps even as far as Florida] and the upper Great Lakes' copper regions. In other words these were in no way "primitives". The skeletal structures of bodies found in such mounds seem "normal" as best as can be determined in their usually crumbly states. There is no indication, that I know, to point to them being from anything but what we would call "local" peoples. So where does the "anomaly" come in? The anomaly is the "Grave Creek Tablet". This is an oval piece of polished light-grey sandstone [1 1/2 x 2 inches] engraved with what seem, clearly, to be alphabetic characters. These characters were undecipherable, but their appearance suggested ancient European or Northern African languages. This, of course, set off a flurry of speculation and debunking of all manner of theories. (As an aside, Henry Schoolcraft was married to a half-Scotch-Irish, half Ojibwe lady named Jane Johnstone. She is recognized as the first Native American author, and one of her writings is said to have inspired Longfellow's work on Hiawatha. I've included her portrait and a book cover at the left as they may be of interest to some). 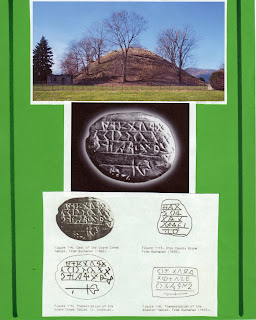 But, back to the Grave Creek Tablet: This object was found with the debris of the excavation despite debunkers trying to say that it was not. Reading of the early descriptions of the dig clearly identify the Tablet as being found in situ. The reason for an almost ferocious desire on the part of some archaeologists to debunk the Tablet is that in those days some people were trying to defame the Native Americans as being only the degenerate remains of a former higher civilization formed by early European or Middle Eastern immigrants. One of the most inflammatory of these theories involved the Mormon claim that all this was the result of the work of the Lost Tribes of Israel. When one studies the various areas of academic research, one finds that every area has in-built prejudices against certain categories of ideas, and these, often unspoken, dogmas are taught into the minds of all their upcoming students until one has a full tribe of truth protectors of things that they don't even understand, nor want to consider. In this, the Tablet is a "victim" of the same sociological phenomenon that causes us troubles in UFOlogy, Parapsychology, Cryptozoology, and the rest of the things we find interesting. The Tablet was sent to the Smithsonian where copies were constructed, which, apparently still exist. Somewhere between Moundsville, the Smithsonian, and West Virginia University however, the original was "misplaced". [I suspect that it sits in the same warehouse as the Ark of the Covenant...just joking...don't want to start another internet conspiracy]. 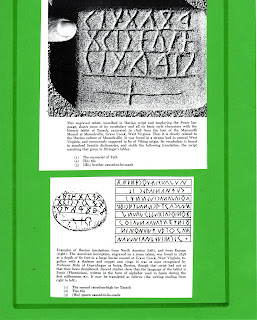 As time has passed and as we have slowly grown more "fluent" in ancient alphabets, the translation of the symbols on the Tablet have been attempted over again. Early "translations" have ranged from the preposterous to the meaningless---VERY unconvincing. But other tablets have been claimed and new understandings of old languages seem relevant. The most intriguing to me is the opinion of the Danish scholar, Rafn, who recognizes the alphabet as that of pre-Roman Phoenician [Punic] used in the Iberian peninsula in the near B.C. period. Does that even match the building of Grave Creek? Well, it might. Dating the Adena and Hopewell mound-building culture[s] of the Ohio valley still is mired in some controversies, but the papers indicate a range from the early BC to perhaps ~600AD. "Travelers" with such "100BC" alphabets could well fit. If so [what-the-heck, lets see where this idea might lead] what might the symbols say? Rafn's translation reads: "The mound raised-on-high for Tasach...This tile...his queen caused to be made". Well, maybe...it at least makes a kind of sense. The objections are the following: understanding of the alleged language isn't very settled yet. And there is no good evidence, in terms of other artifacts that an Iberian wayfarer passed that way. But there MAY be some good evidence that another group of wanderers blundered into West Virginia at a somewhat later date [early AD], and I'll tell that story in part two.

There are many aspects to this sort of story. It shows not only the possibility of difficult-to-prove [but "wonderful"] mysteries scattered about, but also the nearly impossible problem of getting established academic tribal elders to even consider them. Once again academia "voluntarily" places itself in a box and outside of The Big Study of all that there IS to potentially study. That is of course the biggest story here. Whether people from across the Atlantic "came occasionally by" Moundsville is fascinating but hardly diminishing of Native American culture. All of archaeology shows those cultures to range far and wide and evolve together from the empires of the South. By being willing to think and study the unthinkable, one may discover even more wonderful things. The map on the left is one amateur's attempt to see whether those old mound-makers may have been involved in astronomy and calendar-making. He feels that he has found a Summer Solstice sighting line. This is the same sort of thing that the early Europeans were doing at Stonehenge, Newgrange, and Castlerigg. As I look at the map, I see a very suspicious four-structure straight sighting line [marked in blue]---what was IT for? Maybe one of YOU radicals will make the discovery. But WATCH IT--you won't be popular at your local college. Tomorrow I'll try to "finish" this tale with the saga of the Wyoming County Ogham.
Posted by The Professor at 9:12 AM