Damon,Texas comments, by request from Kandinsky Kandinsky brought up two interesting questions about the Damon TX CE2p case of 1965 written [a bit] about earlier in this blog as I plowed through the CE2p case file collection [which I promise I'll finish in my own strange pattern]. The first was the idea of this being such an early case of a big triangle. The second was that it was reported that there was some MIB involvement. Without making too strong a claim for the following responses, here are my inadequate thoughts. 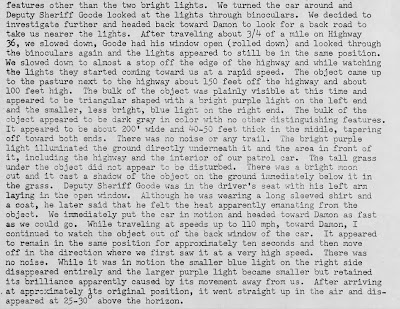 The idea that this case had a triangular object involved comes directly from one of the witnesses' Project Blue Book testimonies, as you can read above. Kandinsky jogged my feeble memory, as I now recall thinking that the "triangular" element of this case might not be really what we would at first think, way back when I first read this thing. In fact I believe that what the officers meant by this was not what we today would consider one of our typical triangles at all. 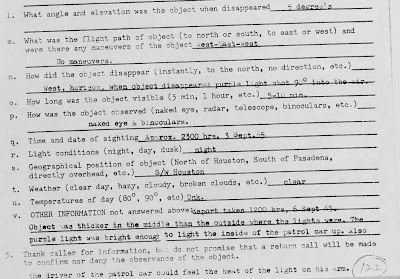 What I believe that they were describing was a rough shape as seen in silhouette. I thought that when I first read this thing because their language seemed to relate to an object seen head on and "triangular" only roughly as an elongated UFO which was gradually thicker/taller in the middle. I always felt that they were viewing an object which had a sort-of swelling in the middle-top and who knows what plan-form shape if you saw it either from above or below. And two really huge lights at the two [note: not three] ends. 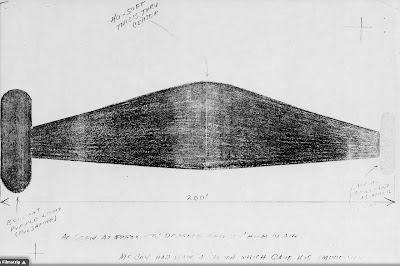 This was reaffirmed for me [right or wrong] by the witness sketch of the craft in the original Blue Book file. This sketch was not to represent the planform shape of the object, but rather the face-on shape. 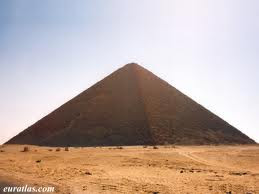 I've wondered if the object wasn't more like a flying flattened pyramid, only looking "triangular" when viewed in silhouette from the side. For our Egyptian pyramid to the left, we'd have to flatten it a bit more, put two gigantic lights on the left and right edges, round the top a little, and get it into the air.
But, it may have been even more conventionally UFO-like than that. 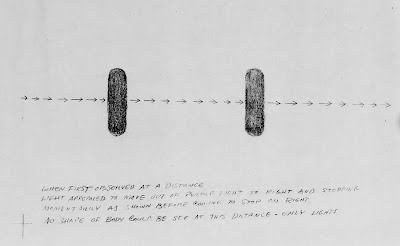 I say that because of two further things from the Blue Book file. There is another drawing there which indicates that the object flew horizontally [this is the very strong implication at least of the document above]. The second reason for a more conventional feeling is the diagram below. 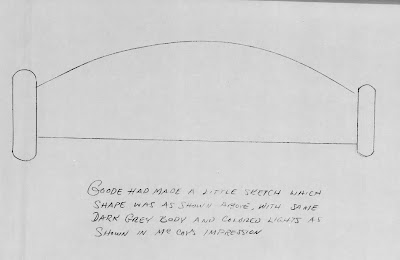 This as you see is the "interpretation" of what he was seeing by Officer Goode. Here the craft is pictured VERY roughly triangular in silhouette and well-rounded on the ---what shall we call it??---a Dome??? Witnesses DO struggle to make their words fit their eyeball memories, and it is not at all "odd" that someone might say this shape [silhouette-wise] is somewhat "triangular". The point should be, I suppose, is that we do not know really what the shape of this thing is/was. My guess is that it was a huge thing with a topside elevation gradually rising towards the center, which was gently sloped and maybe even a bit rounded on top. 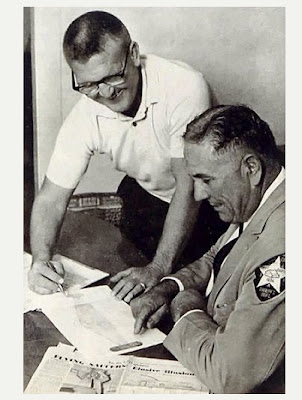 What about Men-In-Black??? I couldn't find out where this claim comes from. Allen Hynek, Jacques Vallee, Dick Hall, James McDonald, and even one of our wildest characters, Frank Edwards, do not mention it---nor of course Blue Book. Until I find the original source for this [I have none of Coral's books nor my APRO bulletins with me, for instance] I can't even guess if there's credibility here. My intuition would say there is not. Our two witnesses [to the left] were veteran policemen and apparently tough old dudes. Not the type to be intimidated nor not talk about the fact that somebody tried to. Plus, such stuff was getting much less in the credible UFO literature by the time 1965 rolled around---at least by any legitimate government authorities. The only thing we have in the research files is the statement below. That statement pictures two guys going about their normal police business and lives and talking about this quite a bit. We UFOlogists should constantly be aware that there are a lot of people in our field who are happy just to make things up. 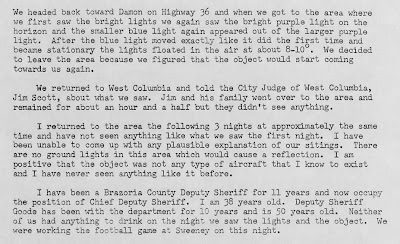 Kandinsky: hopefully this is a little helpful, but please research it yourself and let us know if there is more to this than my incomplete essay.
Posted by The Professor at 5:53 PM