Communion in the Mountains: a Mystical Experience. 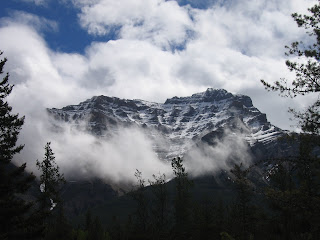 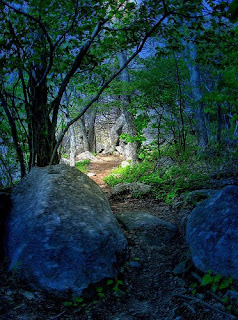 The woman reporting the "encounter" was a teacher at a college, and for purposes of this narrative went by the pseudonym "Dr. Jean Smith". She and her husband were camping in Arizona and hiked into the mountains where nothing was to be heard except for the occasional calls of birds. --- "I was standing in front of a wall of granite boulders of all sizes and shapes when all of a sudden I heard the most beautiful singing I have ever heard. There were no words but the joyous music just kept on. I stood there rooted to the spot, entranced, hardly daring, literally, to believe my ears. The music came from the boulders.----I looked around, and as I did it was as if I became a truly genuine part of the universe. I had the wonderful feeling of sharing or being shared with. It was as if the sky above and the clouds, the breeze, the bushes--everything realized I could participate. I felt somehow as if I really belonged. ---- All restlessness in me was stilled and I was filled with a glorious sense of peace and love. Gradually, the other occupants of the universe became aware that this stranger (I) was becoming part of the experience, they (sky,clouds,rocks,desert,bushes) moved over, as it were, and gave me place among them. 'She is aware, she knows' seemed the communication, and I was humbly grateful for this quiet acceptance. They kind of moved over and let me in joyously, as if happy to have me............all the while, the beautiful voices singing from the boulders kept on............I really can't find the right words.No words can truly relate the wonder and joy of that time--the music, the singing kept on..........."------------------------------------------------She went on to feel the possibilities that we humans could indeed get our own acts together, simply because these "others" can. The Unity there held hope for a better world than our dis-unified one. Her husband, meanwhile, was completely mystified. He couldn't hear the Music. All he could see was his entranced wife. He almost had to drag her away from the spot, not knowing what was going on. "Dr. Smith" was in her fifties when she heard the singing in the mountains [in 1978]. In the nineties she still wondered if she should return to the wall of granite and re-meet whatever was/is there. ------------------------------------I can add nothing to her wonder-filled experience. What lay at the base of it who can say? Rhea White knew this lady and gave her bona-vides. Was it GAIA, Spirit Guides, Little People, the Manitoug of the Superstition Mts, ghosts, angels.....you can build your own model. It certainly does not seem to have been "ordinary". And I wish that I had been there and heard the boulders sing too.
Posted by The Professor at 7:45 AM