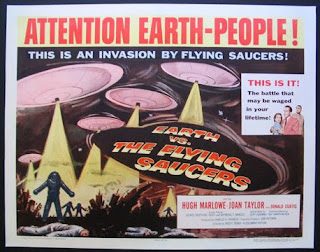 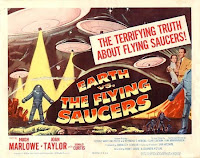 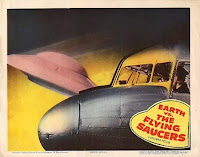 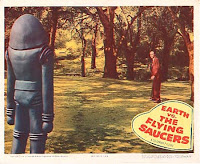 There were two Entity reports [not counting the "contactees" like Adamski and Nelson]. One of them might fall into the contactee category but I do not know enough about the case. This event allegedly happened on October 21, 1954. The witness was a lady living in an old farmhouse in the village of Ranton, England. She said that earlier in the day she had been feeling, quite persistently that "something" was going to happen. Then, in the later afternoon, she witnessed a 25-foot diameter saucer come down to her garden [only 20 feet away]. In the wall of the saucer was a transparent window, through which she saw two occupants. They had high foreheads, and golden hair which dropped to their shoulders. They stared at her until she became quite terrified. The witness then ran inside her house. The reason that I made the remark about contacteeism is that this lady considered herself a psychic, and believed that she had many instances of spirit manifestations. Whether she went on to combine these claims, I don't know. --------- The second entity report is one of my favorites. This is the August 20, 1954 experience had by two ladies in Mosjoen, Norway. The reason that I like this case is that we have two credible witnesses and a quick on the scene investigation. The two ladies [adult sisters] were out picking berries, when they thought that they saw another person doing the same thing. On approach it was a man, medium height, long brown hair and dark complected. He waved and they returned it. His clothing was like a fitted overall, and cinched with a broad belt. There were no buttons nor any fasteners visible. He emanated friendliness and security. They tried to talk to one another, but despite the multilingual abilities of the sisters, they were unable to understand anything he said [and apparently vice-versa]. He drew circles on the ground, as if [they thought] trying to indicate something about space. Then he signaled for them to come look at something, and they went along. It was a ten-foot diameter saucer , perhaps 4 1/2 feet deep. It was a metallic grey-blue. they watched from quite close as he opened a hatch and crawled in. The saucer rose, humming like a bumblebee, rotated rapidly, hovered at about 100 feet, spun faster and flew away in a great burst of speed. The ladies decided not to tell anyone, because they were sure to be called crazy, but one could not resist telling her husband, so the story [thankfully] came out. The site was quickly investigated by family members but no traces were found. Several outside investigators also got involved soon, and all interviews continued to be coherent. I am sure that most will disagree, but I view this encounter as one of the best CE3s in our literature. The case was attempted to be written off as a wayward US military helicopter pilot, but the number of discrepancies about that could fill a page. A few days later the soldier who was allegedly involved said that he had nothing to do with any of that and that any such claim was a joke. ----------------------------------------------------------------------------------------------------------------------------------------------------------------------

There were few other cases that gave me a confident air. I mentioned the Peseux, Switzerland case the other day. Another that was at least interesting was one of the first "engine stoppage" cases on record. There wasn't much information on this, but what it said was that in early October 1955, two men were driving a truck on a mountain road near Agrinion, Greece when they saw a luminous saucer approaching. As it flew overhead, their truck's engine stopped, and they felt faint.----- Another intriguing case, rather unique, was the Titicus Reservoir [NY] incident of September 17, 1955. There a husband and wife heard a loud splash and watched as a pink mushroom shaped object bobbed up to the surface and then subsided. Then there appeared two parallel lights at the water's surface further away. This thing seemed to be about 15 feet long and causing great turbulence in the water. The witnesses rowed generally in the object's direction to get a better look. Whenever they moved directly at it, it would come quickly in their direction, frightening them. when they moved off, so too would it. Finally thoroughly frightened, they rowed back as they came and retreated to their camp. The thing ultimately, soundlessly, moved rapidly down the lake and disappeared. A strange business, indeed. 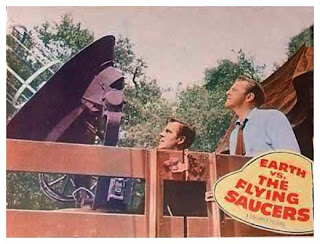 That's the thumbnail condensation of the first year of FSR. I will try to follow on, and also to sprinkle in other [non-UFO] topics when I can. Until then: Watch the Skies!
Posted by The Professor at 6:30 AM