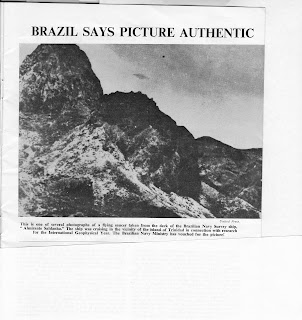 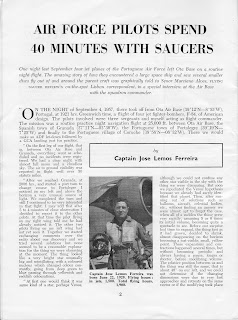 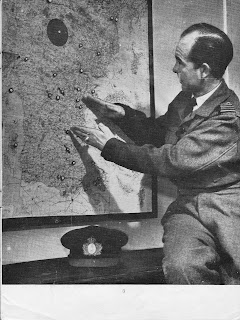 There were a handful more worth commenting upon, but in my usual lazy way, I'm going to cut this a little shorter than a book chapter and just talk about two more. The first relates to the gentleman on the left. He is Lieutenant Colonel H.C. Petersen, and he was the chief of UFO investigations for the Danish Air Force. He was a unique character to say the least. Petersen not only had the formal UFO job, but was a completely convinced extraterrestrialist from maybe the beginning. He immediately began "sharing" Danish UFO cases with everyone who wanted to listen and founded a quasi-civilian UFO investigation organization on the side [which became Denmark's major civilian UFO group.] So, because Petersen was such an "enthusiast", we need to be a little careful with cases coming just from him. In the following case[s] we might be on solider ground because they are two incidents happening on the same date [November 20,1957] and about the same time, one military and one civilian. Both reports are about luminous objects seen by many people which flash colored lights and move and hover. These incidents are from the Isle of Bornholm. What makes this worth mentioning though is the civilian report from the same area the next day. Here the witness saw a triangular object flying very low and close. The top of it was transparent. Inside this dome were two human figures. In a nearby area, two other persons saw what they described as a triangular shaped object with beings moving inside. And in a third town, two more people saw a "T" shaped object without the beings. We were having a little flap of close encounters in Jutland with at least one old-fashioned CE3. Petersen was so impressed by what was going on that he gave out "advice" to the readers to not be afraid of UFOs but if they got a chance to approach a landed one to spread out their arms in a peaceful gesture and think friendly thoughts. [sort of mind-bogglingly surprising on many levels of thinking about it].----------------------------------------------------------------------------------------------------------------------------------The other story that I suppose that I can't get away without describing is the one that I call a high-strangeness case--the Cynthia Appleton encounter. But... the next post will be soon enough as my back is breaking now from this hard seat, and it's time to go to a friendlier chair. So, tomorrow or the next day, folks---blessings till then.
Posted by The Professor at 5:56 PM