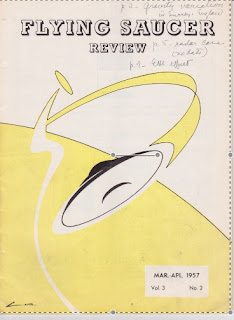 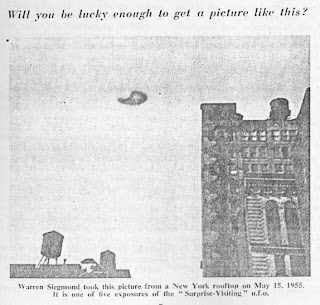 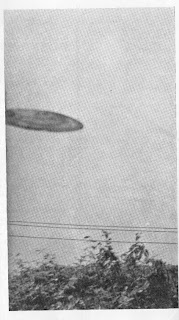 My favorite case of the lot is: Edwards AFB, CA, of early May, 1957. FSR got this report from Coral Lorenzen's APRO Bulletin and both felt it was significant although neither knew the half of it. In the morning two technicians drove to their theodolite tracking camera base and saw a globular white object high above. Unpacking their camera to get ready for their day's work, they called HQ and asked if they could shoot some of their film at the object. HQ said OK. They took several hundred feet. Going back to HQ, they reported again on what they saw and the film was developed. The techs had seen a domed object [clearer through the spotting scope on the side of their theodolite] and something fuzzier but congruent with that showed on the film. This film was also seen, post-development by their boss. The next morning [or so] they were met by officers who quizzed them at length and tried to belittle what they'd seen. One of the techs told later UFO researcher Tom Tulien that he came near to punching the guy. The story leaked to the papers and California newspapers carried it [that's how it got out to people like Coral]. The base tried to pass it off as a balloon but these guys WERE the guys who tracked all that stuff. Even Blue Book wrote it off as a balloon, but the operations officer at the base [a Lieutenant Colonel] looked into it himself, tracked the location of the base's morning balloon launch and found that it was not possible that this was the balloon. He said so in an official report to Blue Book. It made no difference to them that the "solution" was impossible, a balloon it was going to be. We have the great good fortune in this case that James McDonald interviewed one of the technicians and the boss, and Tom Tulien filmed the other [and his boss,too, I believe, for the UFO Oral History Project]. {you see once again folks that I'm writing this off the top of my head without the file, but I can promise you that this is at least 98% correct and errs in no significant area.} The Edwards AFB phototheodolite case is one of the very strong cases because of quality of witness expertise and solid follow-up investigation. It's also great for demonstrating the manipulative and unconcern-for-the-truth policy of the USAF. ----{and to repeat: the photo alongside has nothing to do with this incident, but is rather the "Savage" photo, which is likely a hoax by one of our teenage boys.}--------------------------------------------------------------------------------------------------------------------------------------------------- 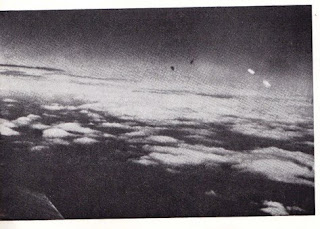 {the photo alongside here actually has a chance of being a rare good one as it originates, according to these sources, from a solar eclipse expedition in 1954, and by a professional photographer on one of the planes. The two black dots are "smudges" (whether by the original development or by FSR, I don't know), and the "UFOs" are the light ovals--well, maybe}. As to other "good" cases, there were probably many. I have trust in the early research team in Brazil of Faria, Simoes, and Perriera. Faria sent FSR two cases of plane pacing that sound solid. In one of them, a UFO flew alongside a Real Airlines flight between Rio de Janeiro and Belo Horizonte for ten minutes, disappearing when they reached the Rio area. In the other, the same airlines had a plane paced between Rio and Vitoria. The object was ropund with a structure on top and shown intense light from both top and bottom. The thing seemed to have portholes from which intense light poured. These things were seen by both crew and passengers. Another case by Faria involved two farm owners and several friends in Niquelandia, Brazil. Their conversation was interrupted by a very bright beam of light. Some of the witnesses decided to walk towards the beam. This thing was a round object hovering just above the ground and radiating so much light [a greenish tint] that they could hardly look at it. As one witness approached, the lights blacked out, and the object just disappeared. --------------------------------------------A few other brief notes: a) the April 4, 1957 radar case at the RAAF bomber base at West Freugh, UK, seems a whacking good one. The British air ministry tried to pass this off as a balloon but even their radar operators disagreed. --b). The June 20, 1957 sighting at Lothian in Scotland intrigues me. Here three adults, a husband and wife, and their minister, saw a brilliant silvery sphere overhead. They were able to view it through binoculars. It had a reddish top and stayed motionless despite a stiff wind. After seven minutes, the thing just winked out of ... existence? A compass that they'd been using then began acting erratically. ---c). There was a terrific display in Northern England on the night of August 21. Golden/silver cigar-shaped object[s] were seen "Teeside to Tyneside" gracing the skies and wowing multiple independent witnesses. ---d).in Balfour, New Zealand, two guys tried unsuccessfully to catch a mini-UFO. Shades of the Irish farmer from Monelmore we mentioned last time!---e). In 1845, it was reported that the crew of the brig Victoria, sailing the Mediterranean east of Asia Minor, saw three luminous bodies rise out of the water one-half mile from the ship. ---f). and, oh yes, just to make a liar out of me, Christchurch, New Zealand reported a drop of "Angelhair" 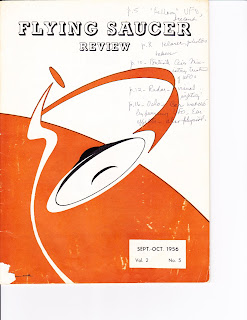 I am traveling home this weekend but will try to get the socio-cultural part of FSR-V3 out before. While home, I may not be facing that much "order" that week to blog, but will do what I can.
Posted by The Professor at 3:23 PM