Dowsing One Step Beyond 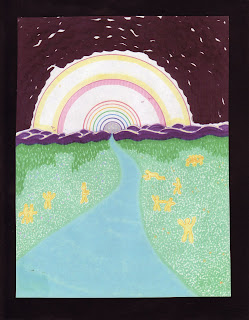 My awareness of anything allegedly serious to do with dowsing came from an unexpected source. While teaching college science, my best friend was/is one of those rare professors whose brains were actually impressive. He was and is the most analytically bright guy I have come across. He reminds me of my "distant" buddy, Henry Bauer, in more than one way. Not only are they dazzlingly sharp, and very tough sells on anything paranormal [they smile benignly at me when I talk about these things, doubtlessly thinking "well, it's mostly harmless" and let my "enthusiasms" go], but they also each have ONE [count 'em, one] anomalistic thing that they absolutely believe to be real. Henry's is, of course, the Loch Ness Monster. [I'll give my friend a pseudonym, he doesn't need the publicity] "Bill" believes in dowsing. I was stunned when he told me the first time. No funny-stuff, Physics-trained, super-analytical Bill was sure that dowsing was real. The irony was that I was pretty sure, at the time, that it wasn't. He would loan me his copper rods and tell me tales of success [dating back to when he would follow his father around finding breaks in underground electrical conduits]. I tried them. It became obvious to me that I could make them do anything that I wanted them to do, cross, stay straight, swing wide, regardless of the surroundings---just by the tiniest of movements. [I admit that I wasn't in the right frame of mind for any real test, but it still showed me that dangers lurked in this business]. Bill said that the rods would cross when you walked them close to a person, as if "sensing" some "field" [he, the physicist, wanted this to be a "normal" energy field]. I told him that I could walk right through that "field" and proceeded to do so--the rods remaining parallel right past both his ears. Hmmm...that seemed to surprise him, but did not severely dampen the theory--my manipulative force was overpowering the field involved. Surely if we could devise a test blindfolded, we'd see the truth. Not wanting to poke anyone's eyes out, our speculations stopped there. Now and then he'd tell me of some new experience he'd had with the rods, and, because it was him, I knew that he was telling me exactly as it had happened. More on the strangest of these later. 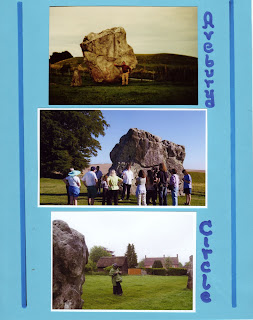 My next encounter with dowsing came when I treated myself, somewhat guiltily [I am a Catholic afterall] to a wonderful adventure called Magickal Britain. This was a tour to the ancient sites [megalithic and Arthurian] in the west of Britain and Scotland. If Jamie George is still running these things, do yourself a favor and explore. Most of the stuff was magickal All-The-Way-Fool but a bit of it was Out Proctor or worse. The relevant point to dowsing happened at Avebury Circle. Here many of the tour companies apparently arrange for a dowser to show up and lecture the Americans about dowsing, Earth Energies, and the "fact" that you could detect them right in the Circle. {about half the people on my tour already believed this by the way}. The three single guys on the tour stood and watched the guide cleverly manipulate the excited tourists [wanting to participate in a bit of mystery] by suddenly saying something just at the moments that they crossed the line between standing stones, and the rods would obediently cross. I kid you not; he did it every time. Jamie came over to us and asked "why don't you guys think there's anything to this?" I tried to explain what I thought was going on, but one of my new-found friends, Richard Bull, took the issue by the horns. The guide was explaining how the stone's energy would turn away the rods [like the face was supposed to, earlier] and asked for volunteers to demonstrate this. Richard immediately volunteered. I said "Dick, don't do this to them.", but with a bit a devilry he took the rods. While the dowser was trying to program him with what was about to happen, and saying so with increasing volume as Dick approached, Dick stuck the parallel tips of the rods right into the face of the stone [just as I knew he would]. I don't remember how the guy tried to save this situation, so I won't make something up. But it was an awkwardness that didn't really need to have occurred. As Henry and Bill say about me: it's not doing any harm. These anecdotes are mentioned not to claim much of anything. They only point out that if you don't want to go along with the game, the forces involved are not strong enough to overrule you. ----------------------------------------------------------------------------------------------------------------------------------------------------------------- 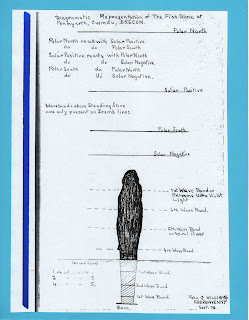 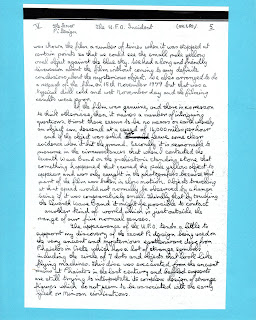 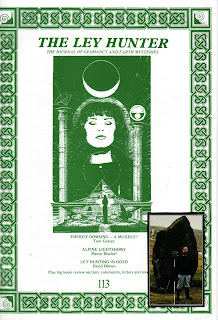 Maybe we don't like to mix dowsing with UFOs. Some would; some wouldn't. The "Ley Hunters" [I'd define this for you if any universally agreed-upon definition existed] seem to take a creative stand about this: "UFOs" exist but they are some sort of manifestation of these Earth mysteries that we're generally talking about here. Paul Devereux [see the insert on the magazine cover] is the former talented and imaginative editor of the, also-former Ley Hunter magazine. Paul became a relentless debunker of the Extraterrestrial Hypothesis for UFOs, though a thoughtful and civilized one [this is something that you cannot say for all such folks, particularly those from "across-the-pond"]. Paul was certain that the ETH did not work for UFOs. I don't know what he felt about ideas like Williams' but I imagine that there was some sympathy there. The particular issue of the LH shown, by the way, contains a major [and concerned] message by Tom Graves distressed over the inability of the big thinkers in the Ley field to be able to come to agreement on almost anything that they had been talking about---shades of UFOlogy. Many dowsers would happily just leave larger concepts like Leys alone and concentrate on the microproblems of what dowsing can or can not do on the site. There have been several archaeologists for instance who have shocked their colleagues by admitting [once their reputations had been established] that the secret to their success in locating buried sites/structures was dowsing. CSICOP no doubt crapped their cumulative pants. I'm going to end by going back to my friend "Bill". He came to me, just a year ago, and admitted that he experienced something with the dowsing rod that boggled him--this is one of the most un-boggleable persons on the planet. As part of his interests in genealogy, he was looking up gravestone markers in a New England cemetery. As he really does have a bit of the adventurer in him--despite no Irish blood, alas--he had taken along his dowsing rods. The rods behaved differently over some graves than others. Was there any pattern? Yes. Being who he is, he saw it after many tries. The rods moved differently over a male grave than they did over a female one. WHOA! I just went Out Proctor.
Posted by The Professor at 10:09 AM