OUT PROCTOR: Where the Dark and Weird Things Go 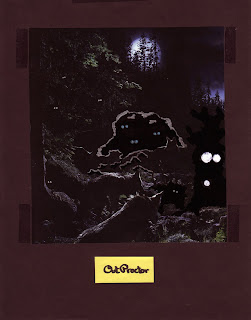 Today, Mothman. But first I need another state-of-consciousness. We have "conservative", "liberal", and "All-The-Way-Fool". But for today and in the future, I'll need "Out Proctor". When we want to talk about normal and relatively normal things, we're in the comfort zone of conservative/liberal. When we're among friends [like here], and we want to take a risk to speak of strange things that we really think we have a pile of evidence for [like everything on the blog so far], we might be willing to go All-The-Way-Fool. But there are some things that, as John McEnroe would say: You can not be serious. Since those things are often interesting and some may even be true, I am introducing a state-of-blogmind called Out Proctor. When we're in Out Proctor, we're having fun---and just maybe... 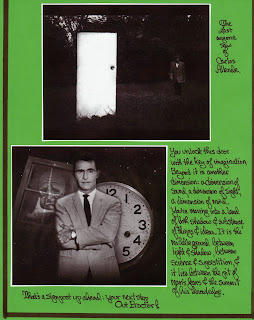 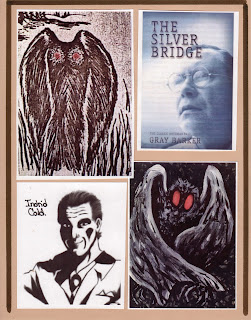 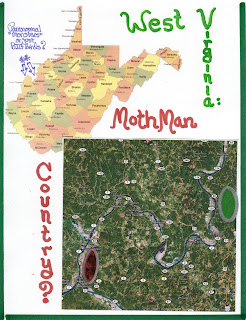 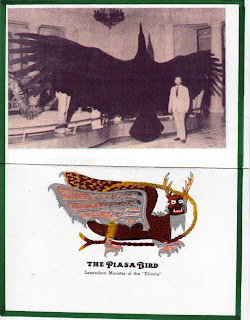 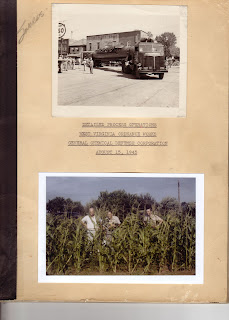 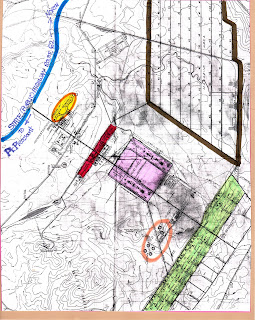 Since I haven't seen a really good map of the WVOW, I'm putting one on. The blue line is the public road. Down goes to Point Pleasant. Up goes to northern Mason County and, ultimately, with a bend in the Ohio River over to Jackson County. The yellow oval is the Staff House area, where we lived [as Dad was #2 civilian at the Works]. The red area held two power plants--you had to get past two check points to get in. The purplish-pink area is the heavy chemicals "acid plant". In most ways this was the most dangerous area of the place and where my Dad was, in essence, production boss. It dealt with things like Ammonia, Nitric Acid, etc--NOT "mutagenic chemicals" like some videogame fictionists would like to ascribe an Godzilla-like Mothman to issue from. The danger came from simple explosions and the instant kill properties of ammonia and nitric acid if released and breathed in. My father once had a runaway reaction going in there. The whole WVOW was evacuated to wait for the explosion. Dad told Mom to put us kids in the car and drive far away. He would "see us later". He and one man went back inside that plant and shut the reaction down. [I suppose that not everyone will relate to this, but that last sentence made me stop and cry]. Anyway, the salmon-orange ellipse contained the Toluene which was nitrified to make the Trinitrotoluene [TNT]. That was in the green area. Ready-to-roll-armaments were in the brown area. I've lumbered you with all this description of the Works because I believe that knowledge is better than ignorance, especially when trying to figure out the anomalies. But, what-the-heck, here's what really happened: Dad and his friends buried the multi-tons of squash on WVOW property. Over twenty years, the squash fermented into a mass of swamp gas rivaling even that of Michigan. Occasionally this squash gas would erupt into glowing and red-orange floating masses which were capable of over-exciting ignorant hill-billies like ourselves. This attracted not only Gray Barker and John Keel, but also UFOs wondering what the fuss was about. Seeing an opportunity for communication, the UFOs released Mothman and you know the rest of the story. I just knew Dad had created Mothman somehow. ------------------------------------------------------------------------------------------------------------------------------------------------------------------------------------- 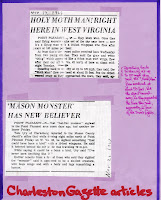 Well, seriously, if such words can be used in an Out Proctor situation, I don't know what to think about Mothman. Mary Hyre seems a good local information source. Tales like Ury's or Pickering's seem to clearly say impossibly big birds. Others say no way. Despite the outrageousness of the topic, there seems too much there to just toss this away. Yet I don't have my "best" witnesses types to anchor me firmly. If someTHING went on, it was paranormal either way [that is, we're not dealing with Earth-biological Cryptozoology]. We're All-The-Way-Fool or we're just Out Proctor until more information comes along. I've attached here at the bottom a few of the early WVA newsclippings in case you've not seen them. Hmmm..."Proctor" if you rearrange the letters spells "crop-rot". This is starting to all make sense!!! 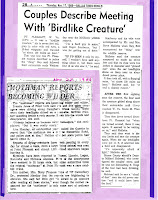 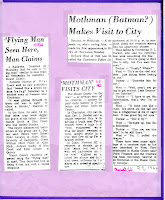 Posted by The Professor at 1:10 PM