UFOs: What Is Known? 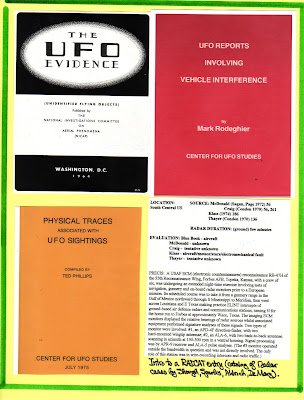 It's often said that we don't know much about UFOs, and that, given their apparent behavior, we are unlikely to ever know much. I don't blame people for saying this; they are feeling the frustration of not being able to solve the mystery. But, whereas it is true that we don't know enough to solve the mystery, and conceivably might never do so, it's not true that we don't know much about UFOs. In fact, we know so much about them, as case incidents, that you can't keep track of it all. The references above are warrior efforts by some guys who have tried to make it a little easier to keep track. Perusing their great masses of information [and there are others as well], one sees that there is, as Hynek once said, an "abundance of riches". The twin facts of this abundance of riches and the unsolvability of the mystery should give us pause for thought. That thought for me is: someone else must be deliberately manipulating how this has occurred so as to KEEP it unsolvable. [and I don't mean the government, which is surely a pip-squeak in this story]. Well, if we know somethings, what are they? [by the way, the pictures to the left aren't in any order, since I had no idea what exactly I was going to say when I started typing this. They illustrate some of the best and most interesting cases--some of which are commented upon below].

We know that the phenomenon is "real" in an objective sense. This stuff goes on in the physical world rather than just the mind. Even the University of Colorado team knew, and stated in internal documents at the early stages of the project, that the external nature of the phenomenon was not an issue of debate, given what we already knew. All the USAF study teams from 1947 through 1952 essentially immediately said the same thing. In the Boianai case, 38 people saw an "impossible" disk silently standing in the sky. It was no "mirage". Entities on the deck waved in response to the humans waving on the ground. Anyone who objects that only one witness was "white", needs to check out their soul. Many of the locally-born witnesses were interviewed several times, including by Hynek himself [a rather amusing tape to listen to, by the way].A year earlier, my brother and I were listening to a guy on the radio, several miles away, describing a UFO, when we looked out and saw our CE1 domed disk. This phenomenon happens, and it happens in an objectively multi-witnessable way. And, it seems clearly technological. There was no doubt in my or my brother's mind that we were looking at a made device. There was no doubt in the Boianai witnesses that they were too. There was no doubt in the minds of Project SIGN nor practically anyone who has really immersed themselves in the case data. These "devices" look both technological and far advanced beyond what WE do. [anyone who thinks that the ETH is a stupid thought to present as a hypothesis has a fundamental prejudice of their own---the ETH may be wrong, but it is not stupid]. 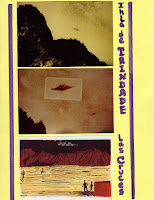 The Nash-Fortenberry case is a classic of multi-&-experienced witnesses seeing something that was clearly flying, clearly purposively [it was a FORMATION flying], and clearly out off our league in terms of performance characteristics. These disks not only flew as aircraft might [in stepped-up "echelon" formation] but did a "non-inertial" sudden stop, a reversal of positioning, and racing off to be joined by two other disks which maintained the original formation flown. There was nothing "random" about this. This was structured and intelligent. Desperate debunking morons have floated hypotheses like "there were lightning bugs trapped in the aircraft windshield" or "the pilots couldn't recognize that they were smoking and their cigarettes were shining off the window". The level of denial and simple jerk-ness in these people is astounding. A very large portion of the phenomenon looks intelligently-driven and aimed at the witnesses specifically. Due to an insight by a colleague at CUFOS, I collected a double-handful of cases [it's about twice that now] wherein the UFO made precise motions "around" astronomical objects with respect to the observing angle of the witnesses on the ground. The Lake Ronkonoma case is an outstanding example of this. To pull off this precision, the UFO controller must know exactly where the targeted observer is and fly accordingly. The fact that these "astronomical alignments" most often are flown for the benefit of astronomers makes this a bit freaky. [I have a friend who said that this was the most disturbing feature of the phenomenon that he'd encountered]. Just to help our paranoia, I've nick-named this "we know where you live". Astro-alignments are just a small part of a vast set of cases which seem to be "displays". This then is another of the quintessential features of the UFOs--they are extremely OVERT to the witnesses, while remaining diabolically-cleverly COVERT to the consensus reality. Again, this should give one some moments of thought about the seeming truth that this whole show operates according to a plan. 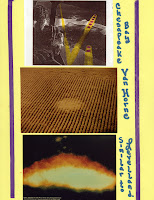 The phenomenon is operating within our physical universe. Many times it may just be in the form of projections of light [ beams, holograms, various elements of the spectrum], but there are several categories of cases which seem to involve a real spatial presence. UFOs may register on instruments--photography, radar, rarely geiger counters. While doing so, some cases have the UFO moving around just as if it were "flying" in normal 3-space. Admittedly, one can imagine elaborate projection simulations with consequent beaming of light energies of various kinds, and this may be true. But it is just as possible that these sorts of cases indicate real physical presence. Even if the "craft" is not here, the lightbeam technology projections are. Sometimes it seems that the case demands such a non-mass projection or hologram display or whatever. A major example is the tremendous [in both size and investigative quality] encounter researched by Martin Jasik--the "Yukon Giant". This widely-experienced and many-witnessed incident featured an object so large that when it began to move it should have sucked the air out of a large area in central Yukon, but it did not. One supposes that with extremely advanced technology anything is possible, but the simplest hypothesis is that the "Giant" was a projection. Nevertheless, Close Encounters of the Second Kind, like electromagnetic and machine-interference effects, as well as trace effects on plants/crops [of which there are hundreds] would more easily suggest physical presence. I opt for physical presence in these latter cases due to one "odd" element in them. You can take a couple dozen of the best CE2 electromagnetics cases and compare the appearances of the crafts. There's no uniformity. The minds behind the "agenda" can stop a car using the presence of a sphere, a disk, a domed disk, a BOL colored one way, a BOL colored another, a disk which beams, a disk which does not, a beam which narrows, a beam which spreads---etc as far as you want to go. The Appearance of the craft makes no difference. You can stop a car regardless of how you make your UFO look and behave. It's all the show put on by the "magician" so that you never see any pattern [as firm patterns could lead to a requirement that consensus reality admit that the phenomenon is real]. It is because of this effort to disguise any regularity behind the crafts that I feel that the informationally-useless crafts are probably actually here. They would be a convenient focus for whatever the agenda-ists are doing without giving anything away. The great Mansfield case, where a National Guard Helicopter was "tractor-beam-pulled" up in the air, is an unusual but spectacular case of what looks like physical presence. It is also one one the solidest cases on record, with the appropriately moronically-desperate "solutions" by the debunkers.

There are quite a few more things that the UFO research community could mention that are known, but my one-fingered typing is getting tired. Taken as a whole, the great pile of UFO experiences acts like a huge display agenda which is trying to impact individuals without markedly impacting the consensus knowledge of the established guardians and determiners of what is real. What this agenda is, is not at all known, in my opinion. My friends in the CE4 community have their hypotheses--but they are not convincing [at all] to me--regardless of how much I like the guys. Comments that the agenda is seeping into the majority culture through all the science-fiction awareness, is also non-obvious to me--I see nothing there that I would rate as significant. That is why my preferred hypothesis right now [yes, I will change tomorrow] is that these characters have had no need to be incredibly patient, but have been getting done what they've wanted to do all along. I've mentioned my concept of three types of Uber-advanced cultures in an earlier post, and none of them would need a long time to get into what they were separately interested in. And none of them would be consensus-reality interfering but would like to be either passive observers or overt exciters of individuals. Yeh, it's way speculative at that point. I don't claim anything for it--other than it deals with the "60" years as I know them.

Let's sign off with these three last neat cases. Cotile Lake was a case where a family friend and two daughters were returning to the truck with camping gear and a big UFO came overhead, shot blue beams down on them, paralyzing them temporarily. When the beams went off the three were able to move again. Allen Hynek investigated this case himself. Amarante is the nickname that the French government investigative office, GEPAN, gave this encounter, wherein a mini-UFO flew into an urban garden and posed for a while for the witness [a scientist]. They took samples of the plants nearby and the labs found that the plants showed the effects of some type of radiation on their pigments. This effect was inversely proportional to the distance of the plants from the object--that is, it obeyed normal 1/r-squared laws of radiant energy. The last case is one of my favorites. A wife is driving her sleeping husband home from an accident on a job a distance away. Near their home she sees that all the security lights are out. Then she sees that a weird cone-shaped object is heading her way. Her car quits. Then the thing seems to be picking up her car as the front end leaves the ground. Understandably panicky, her hollering wakes up her husband and he sees the the car's front is off the ground, too. The object retreats and they come back to Earth with a thud. Their landlord noticed odd light effects and electrical interference at the time, as well. Hmmm. Sounds pretty physical to me...and not at all like the CIA, no matter how much they might like to be able to do any of this.
Posted by The Professor at 6:44 AM