A Subtle Thumbprint Of The UFOs ? 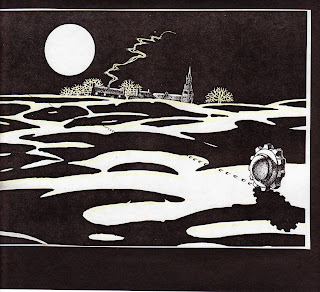 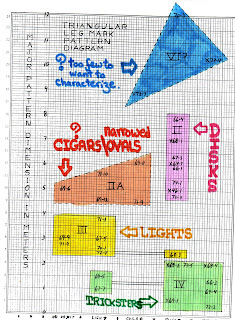 I have no photo of Fred Merritt or I'd honor him "personally". All I can do is tell you a little of who he was when this work was done. Most folks don't know that when Allen Hynek left USAF consultancy with the cancellation of Blue Book, it was not at all obvious that he could start up a civilian UFO organization. Fortunately in Chicago was an energetic man named Sherm Larsen, who had begun a NICAP affiliate. Sherm argued, successfully, that with the impending dissolution of the parent organization the valuable NICAP files should be brought to Chicago, where they'd serve as the basis of a new research group. [most of these files DID make it to what became CUFOS, thankfully ]. Getting together with Allen Hynek about a new synthesis ultimately got Hynek to agree to a merger of Larsen's group and Hynek's files and contacts under the description of a new more science-oriented operation. One of Sherm's colleagues was Fred Merritt, a Chicago businessman and an unusually science-interested "amateur". Before even meeting Hynek or Vallee, Merritt was trying to do statistical work on the case pile. He reasoned that the "landing trace" cases were the best chance one had of finding the elusive objective reality. For whatever reason he concentrated on those cases where the object seen was undebatably a structured object [to all appearances]. These were the cases where the object had extended "landing pods" rather than just rested on the ground. He began to plot these cases by various size-related properties. And he began to notice a pattern hidden in his pile. That pattern is in the graph above. [I colored the chart to make it stand out. The color labels for the "domains" are also, obviously, mine, but I don't think I'm misleading you there. Those labels are taken directly from Merritt's own descriptions of the case types. This is even true of my word "trickster", as Merritt defines these cases as associated with entities that he describes as the "Mob from Magonia" who play pranks on people.] Before getting further into this, we need to be honest and admit that the case numbers are few. But the pattern he saw is extremely interesting anyway. Notice that the domains, the case clusters, do not intersect. I find that VERY interesting. If I was dealing with an "unreal" phenomenon pushed up by human errors and stupidities, I'd insist on this graph smearing together with much more randomness. This graph, if true, is characteristic not of randomness but of several distinct "behaviors" of things going on in nature--whether artificial or "merely" some nature-produced physical manifestation. In fact, it looks to me like several sorts of UFOs. [but not an "infinite" variety of them]. The disks are a surprisingly tight domain. And, they have [when associated with Merritt's tripod landing traces] significant size [the leg patterns themselves are about 15 to 25 feet in diameter] which could allow "occupants" of a size something like ourselves. Merritt said that these disks averaged about 35 feet in diameter and, when associated with occupants, those occupants were "normal" height. Keep remembering what he is doing: only tripod cases--not everything. If you have enough type cases, though, ALL such graphs should be smeary--not separable into tight domains. If Merritt is correct, and this pattern holds [at least through the times that he did it--remember we have deliberate Confusers at work here too, so they could have later cleaned up this mistake] then he may have found that we have not only physically real presence [rather than only a variety of force projections] but possibly something even more interesting to me. Among the UFOnauts he may have found the "tricksters", the "Mob from Magonia". That green domain is significantly separate from the disks. Merritt was amused by them. He said that the occupants were small pranksters, and often "flew" in "aerodynamically-absurd" shapes. I can't help being a bit thrilled by Merritt's try here. I can't tell you if his pattern plays out either longer or stronger with more data. Ted Phillips' catalogue of traces is a wonderful thing, but doesn't contain the type of detail to test this further. I do have a rare copy of Fred Merritt's original catalogue but it's on loan to friends and I can't tell you if there is more there--probably not as the sheets I have look like summary graphs from that exact data. Maybe someone of you can either find that someone has already advanced this, or will do it yourself. The only time that I ever had a personal conversation with Ted Phillips, he told me, without going into it, that once he heard the witness' description of the object involved in a trace, he knew exactly what the trace would look like before he arrived on the scene. Maybe something like what Fred Merritt found was part of what Ted knew.-------------------------------------------------------------------------------------------------------------------------------------------------------------------------------------------------------------------------------------------------------------------------------------------------- 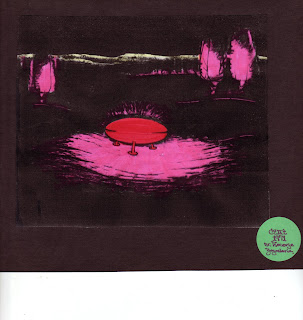 To wrap up the day with a little light fun, let's just tell a few UFO landing pod case stories. I just picked a few of the better ones out of the file cabinets--my opinion, so don't take them overly seriously. Case 1: early May 1971; near Kocevje, then Yugoslavia. A young woman [17] was riding home on her bicycle slightly after 8pm. Off the road was a reddish glow accompanied by a buzzing sound. There was a slight hollow area in the field, and the red object seemed nestled down in there. She showed remarkable courage and stopped to explore closer. The thing was a giant red glowing "egg" standing on three short legs. She watched for a time, but the uncanniness of the thing ultimately unnerved her and she retreated to her bike and rode away. She kept looking back all the way home and finally saw it take off, landing legs now pulled up, and ascending in a spiraling flight. When she got home, she found that her mother had also seen the object from that distance. Later a neighbor reported seeing the thing as well. They were all ridiculed by the local police. The next day, the witnesses went to the site and found traces which were not well described by the UFO investigator. [some 'holes' were described but you can't tell if he means pod traces or something more like soil-sampling holes]. Regardless, here we have a multi-witnessed three pod disk of a size that would have fit Merritt's pattern. Case 2: August 16, 1974; Port Coquitlam, British Columbia. Three young boys were walking in the woods near their homes at about 8pm. Their cat began acting very strangely and they saw above the trees a metal disk flashing colored lights and making a loud noise. The cat ran to its owner and jumped into his arms. The disk moved away slowly and seemed to land in a nearby sandpit. Just before landing it extended three landing pods and emitted a blast of hot air so strong that the resultant sand dust covered the boys, standing 150 feet away. Two boys immediately ran home, but one hung around a moment longer. He said that the disk was bigger than his father's car and had a box-like structure on top. Then he too ran away. Only one neighbor took them seriously, and she went to the site the next day. There she found three indentations from the gear, and a circular spot surrounding them where "carbonized deposits" remained. She collected samples from this area and [coincidentally?] developed a numbness in her fingers, which lasted for a week [this same sort of effect occurred at the Delphos landing trace when the mother of the witness handled the whitish material of the mark]. She called the RCMP. They refused to investigate, but a college prof did and found no radioactivity. Her soil samples were sent to a university lab for analysis. The lab was "baffled" by the carbonization. "A high degree of heat would be required to produce such results, but even simulated conditions would not extend so far into the sandy soil." [translation: he subjected the sandy soil to great heat and still couldn't get the effect to occur below the surface, although the UFO was able to do so]. This is a nice case, not because of the credibility of the young witnesses, but because it has scientific testing with puzzling results.--------------------------------------------------------------------------------------------------------------------------------------------------------------------------------------------------------------- 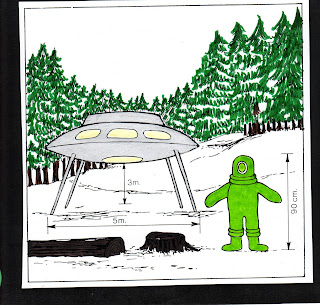 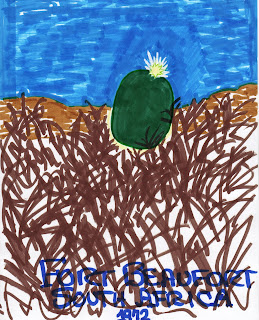 I should tell more, but my one-typing finger probably feels like that guy's hand in the last one. So, just one more. Case 4: June 26, 1972; Fort Beaufort, South Africa. --[notice how important it is to pay attention to non-US cases]. There were a bunch of people over the years who investigated and talked about this incident, and someone who wanted to do a comprehensive search on this could do better than I. This took place in farming country at about 8am. [some say 9am]. One of the workers came running to the farm owner to report "an ugly thing" which was present near the farm's reservoir. This "thing" was emitting smoke and fire. The owner left and saw a fiery ball [initially red but later changing colors]. It seemed at about tree-top level. It was less than a meter across. The laborer shouted and the thing immediately moved sideways almost 300 yards and seemed to hide behind a bush. Then it reappeared and continually changed colors from red to green to yellow-white. The owner decided that the only thing to do was shoot it. [ah, the greatness of humanity]. He went back to get his gun and called the police. Police showed and everyone went out to confront the whatever-it-was. The owner then unloaded 8 shots at the thing, feeling that he had heard a palpable hit on the eighth. The police joined the fun with a few shots of their own. Then a round black yet shiny object of the same size appeared. More shots were fired but with no effect. Seeming to appear and disappear without an understandable method of doing so, the thing entered thick bush areas and was heard crashing about in them. The witnesses to this whacko experience were the trigger-happy farm owner, two happy-to-go-along policemen, and four farm laborers. Later, search of the area revealed 9 places where the thing had apparently touched down. The marks in question have been poorly described both by location/proximity to each other and to shape. There's been a suggestion that they came in threes. If so, this is tripod like despite the rest of the weirdness--it would fit Merritt's Mob from Magonia. The pod marks seem to have shown a structure to their flat surface, as if the pods twisted into the wet clay on settling down. All very intriguing and bizarre--quite in line with a trickster. I'll let it go with a quote from the Natal Mercury newspaper: "Incredible isn't it, that policemen and a farmer could have tried to shoot out of the sky in broad daylight what might have been a spacecraft from a friendly planet?...If it was a vehicle from outer space, manned by intelligent beings, do you suppose they now regard the inhabitants of Earth as hostile? Belligerent? Aggressive? Or just plain stupid?" Hmmm...tough multiple choice.
Posted by The Professor at 8:11 AM